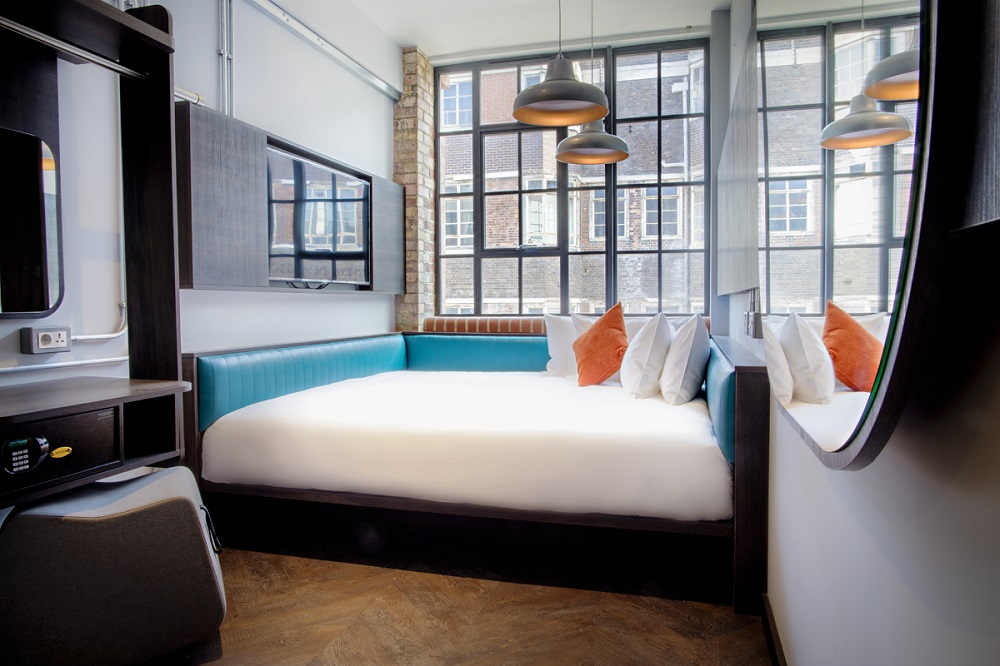 Known as the brand behind the Marco Pierre White Restaurant Group, this latest partnership joins an already impressive portfolio, which boasts the Doubletree by Hilton Hotel and Spa Bristol South, Hotel Indigo Birmingham and the Hampton by Hilton Sheffield.

The New Road Hotel, due to open in October 2017, is located on the site of a former textile factory in Whitechapel, with an interior which reflects the venue’s past purpose and the heritage of the East End.

The boutique hotel is designed to target business commuters and young travellers alike, with exclusive suites including hot tubs aimed at the higher spenders, and more affordable rooms with large communal areas for those wanting a more sociable hotel experience.

The hotel’s concept will focus around stripped-back luxury, with exposed brick work, open lobby spaces flooded with light and five-star service. It’ll pride itself on high functionality and necessity instead of frills and opulence.

Securing the management contract of the New Road Hotel further shows Black and White Hospitality’s versatility, highlighting its desire to work with independent, unique sites such as this, as well as full service hotels with health clubs and spas. With the hospitality brand being synonymous with excellent dining experiences, the New Road Hotel will house London’s first Mr White’s English Chophouse, the Marco Pierre White franchise which specialises in quality cuts of British meat. The menu will focus around steaks, grills and chops.

Along with five Marco Pierre White restaurant franchises and its ever-growing hotel business, Black and White Hospitality also operates theclubandspa in both Birmingham and Bristol. Nick Taplin, CEO of Black and White Hospitality, said: “The New Road Hotel is definitely one of the most exciting and unique openings in the capital this autumn, and the hotel is a perfect fit for our brand. It’s so different to other spaces in London, and we can’t wait to open this October.

“The business is growing nationally at a fast pace, and winning the management contract for such a sought after location in one of the biggest cities in the world is a credit to the hard work we put in at every level of Black and White Hospitality.

“The other big news that comes with this opening is the launching of our Chophouse brand at the hotel. It’ll be the first time we’ve brought a Mr White’s English Chophouse to the capital, and with a sizeable menu of prime cuts of meat, we know the guests at the New Road Hotel won’t be leaving hungry,” he added.

For more information on the brands operated by Black and White Hospitality, visit www.blackandwhitehospitality.com