Live from LDF: Behind the main entrance installation at Decorex 2018 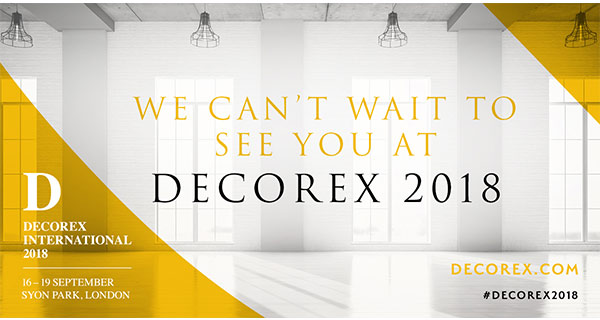 What can you do with a blank canvas. Well, it seems quite a lot as four of the UK’s leading designers were asked to create this year’s Decorex entrance using only the theme of ‘Blank Canvas’ as a guide.

Decorex this year invited its participants to explore how an empty space can celebrate a beautiful new beginning, and it is this idea of a new beginning that led Decorex to brief four acclaimed interior designers to design the main entrance.

Henry Prideaux, Simone Suss, Maddux Creative and Brian Woulfe created site-specific installations that tell the stories behind their development as designers. Each produced a vignette that represents their journeys, featuring items, colours and patterns that have influenced and inspired them along the way. These vignettes will be partially hidden to visitors entering the event, allowing them to be discovered as they move around the entrance space.

With installations from Maddux Creative and Brian Woulfe taking on the Jungle and ruby-red disco lights, Henry Prideaux Interior Design drew on its eponymous founder’s senior year at Harrow School, where he was given the opportunity to create his most decorated room. It was during this chapter in Henry’s maturing life that an inherent instinct to decorate began to evolve and a natural path towards a career in interior design began to reveal itself. The studio took inspiration from the materials and colours of his school, the uniform, the architecture and incredible aesthetic of his surroundings.

Studio Suss, meanwhile, drew on the past experiences of founder, Simone Suss, and how the varied decades have shaped her, incorporating the interests and passions that have inspired her including a diverse spectrum of music, art and fashion.

Decorex, of which Hotel Designs is a proud media partner of, returned this weekend, kick-starting London Design Festival for its 41st edition to the historic Syon Park. It is hosting more 400 exhibitors from established names to up-and-coming brands.