“Individuality with a splash of colour,” says UK Bathrooms about hansgrohe’s FinishPlus range 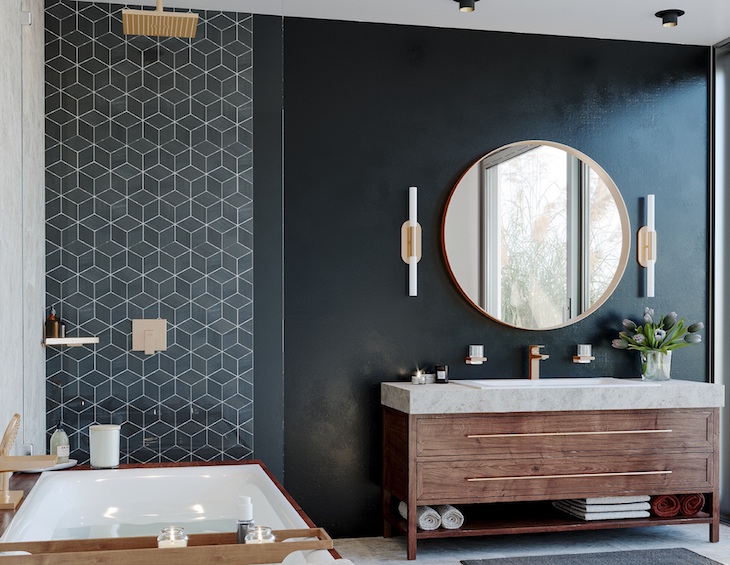 The bathroom of today is taking on many of the traits of other rooms in the house, becoming a space dependant on style and comfort as well as practicality and purpose – a lifestyle area providing sanctuary, solace and a chance for self-care. Design plays a key role in the room’s new function, and the way the bathroom looks now has the power to evoke moods and impact mental wellbeing, be it comfort and calmness in darkest black, energetic and eager in zingy sunshine shades or powerful and present in slick monochrome.

As the bathroom adapts to its creative design credentials, the objects found within it have also evolved, and customisation and personalisation have never been more important. While decorative options for surfaces, ceramics and bathroom furniture have become never ending, brassware choices generally remained limited – until now. 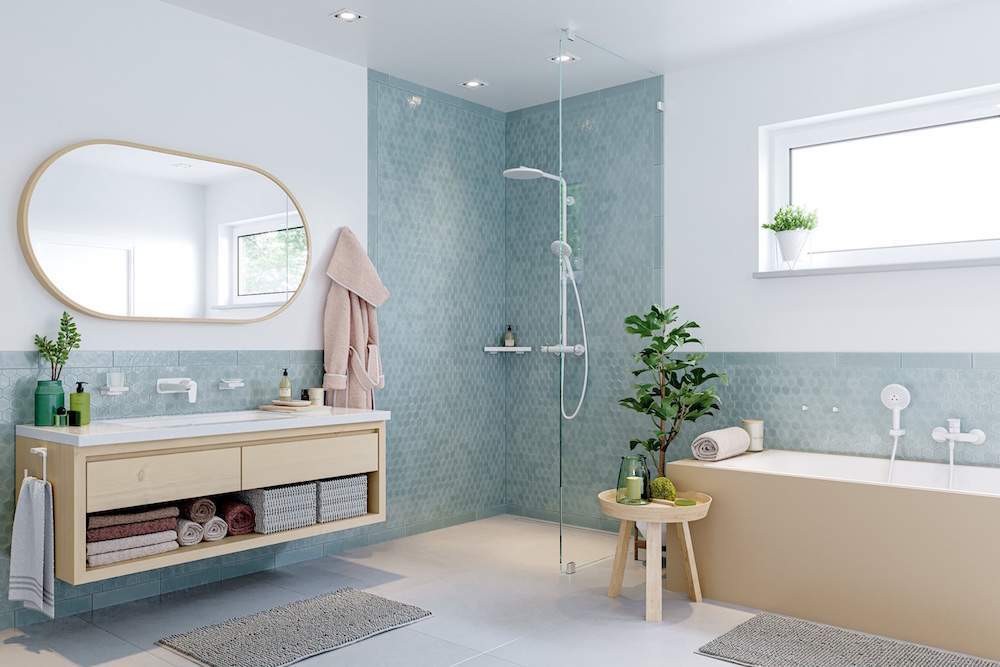 Gone are the days of chrome dominating the bathroom. hansgrohe’s FinishPlus range introduces five forward-thinking finishes, reimagining tones that were once unusual in the bathroom and making them easy to apply across the space. The innovative finish collection coats an array of showers, taps, accessories and (soon to be launched) drains, in bold, unconventional shades and textures which are incredibly durable and scratch resistant, demonstrating hansgrohe’s dedication to unparalleled quality and its view that the movement of water is not only as part of the daily routine, but something to be enhanced, modernised and made more beautiful.

“hansgrohe’s FinishPlus challenges preconceptions of the role brassware plays in bathroom design, and elevates taps, mixers and showers to become key features within the space,” says Graeme Borchard, Managing Director at UK Bathrooms. “The spectrum of finishes offered in the collection have a transformative power over the entire bathroom, offering endless opportunities for individualism and self-expression.”

Hansgrohe’s FinishPlus offers five finishes in bold and contemporary tones which coat some of the brand’s leading designs, such as the angular Metropol and smooth Talis E basin mixers and bath fillers. The finishes are also applied to practical elements such as valves, rails and pipes to create an all-encompassing, seamless aesthetic, with fittings large and small crafted with the same precision engineering the German brand has been perfecting for 120 years.

Welcoming both black tones and texture into the bathroom, the FinishPlus Matt Black surface brings a sense of moodiness and edgy style, its light absorbing matt quality highlighting the shape and silhouette of that which it covers, creating a sculptural feel. Introduce Matt Black into an on-trend all-black bathroom to create an immersive, soothing retreat. 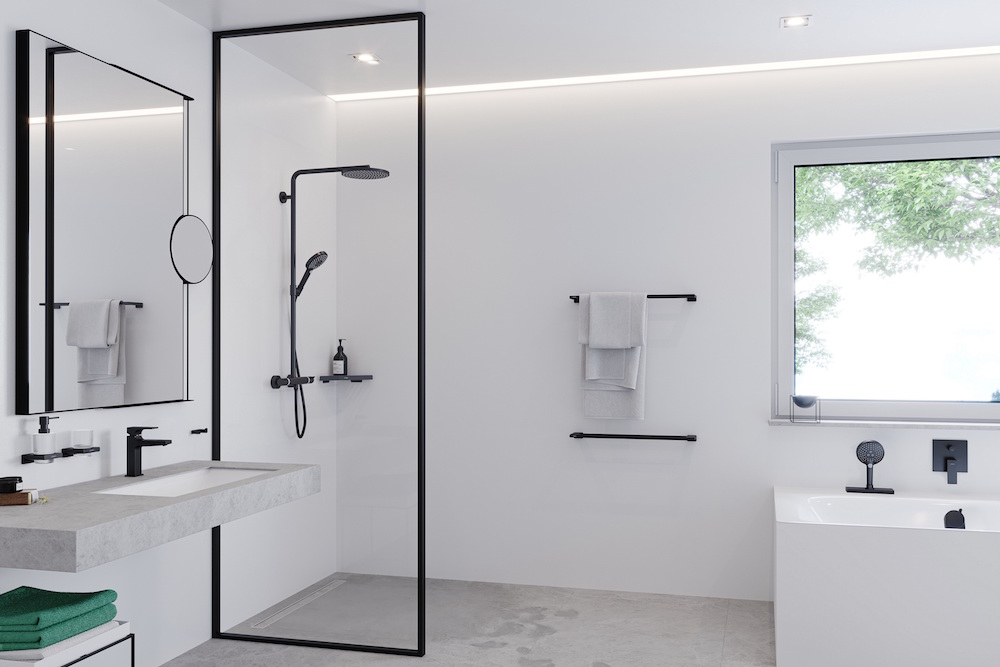 Dark with a muted shine, shadowy FinishPlus Brushed Chrome is at once dramatic and understated. Team with bright whites to highlight its slick-yet-subtle sophistication and moody impact, add to monochrome schemes to highlight its discreet shine, or juxtapose it against a coloured or patterned background to showcase the brassware’s shapely outline.

While white is a staple for bathroom ceramics and surfaces, FinishPlus brings the bright shade to brassware, where it at once makes a bold statement and delicately blends with the room’s surroundings. Camouflage white-coated taps, mixers and showers against a pale backdrop for an ultra-fresh feel and to extend the visual impact of basins and baths, or style it as a statement point of difference against other colours, where the matt surface will create a sleek, contemporary feel.

One for the extravagant bathrooms, a touch of gleaming Polished Gold Optic will transform a piece of brassware into an elegant, Midas-inspired art object. Go all out with coordinating taps, mixers and showers, or have one statement item as the pièce de résistance to bring glamour and luxury to the space.

Hovering between soft gold and copper, Brushed bronze is a gentle take on the metallic, channelling a calming, neutral feel with its soft sheen and muted colour. Pair the shade with natural materials and hues to create a bathroom that’s serene with a design-led edge. 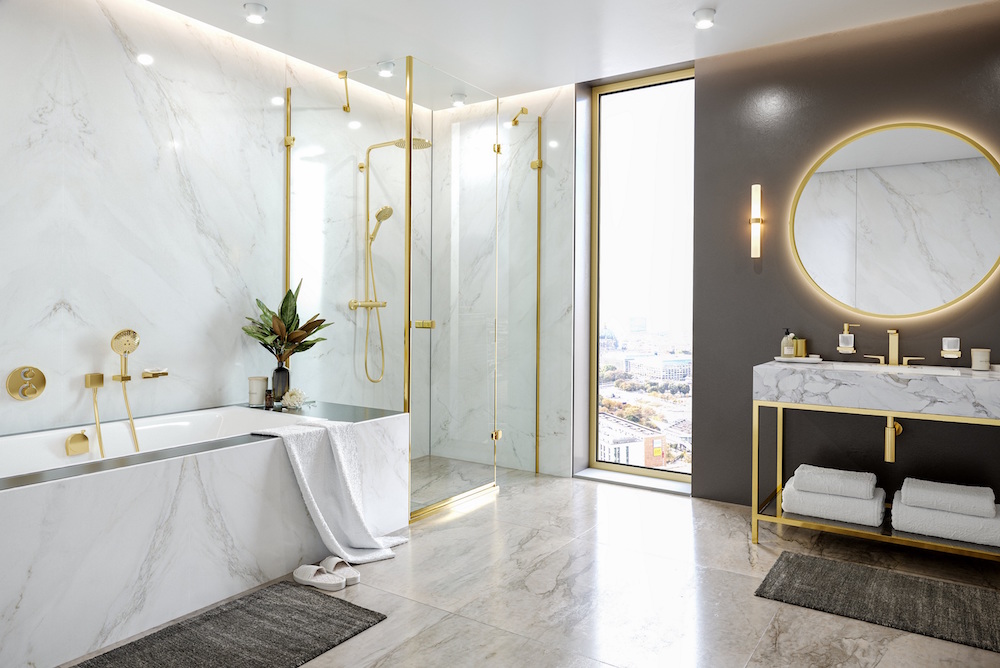 Stay tuned this year for the launch of the FinishPlus Accessories range, which will complement the existing brassware tones and offer ever greater freedom of expression within bathroom design.

UK Bathrooms is one of the brands that has taken advantage of our Industry Support Package and hansgrohe is a Recommended Supplier. To keep up to date with supplier news, click here.