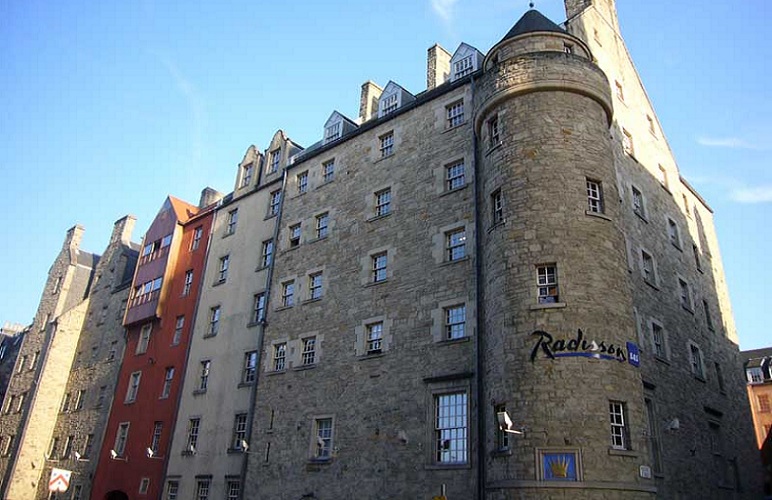 With all due respect to any of our readers who hail from the cities of Bath and Durham, I will tell anyone who will listen that I believe Edinburgh is the UK’s prettiest city. The breathtaking countryside to its south, its cobbled roads, its wonderfully archaic side-streets and UNESCO World Heritage-protected buildings – the Scottish capital is one of our country’s gems; always worth a visit and definitely worth celebrating.

As someone who takes notice of such things for a living, design and architecture play a big part in the city’s allure. From Holyrood Palace to the famous castle and back up again around the Royal Mile, there are so many fantastic examples of both. With such striking and beautiful architecture at every turn, it figures that more modern projects – namely a Radisson Blu hotel – have to incorporate these stunning surroundings into their external appearance. 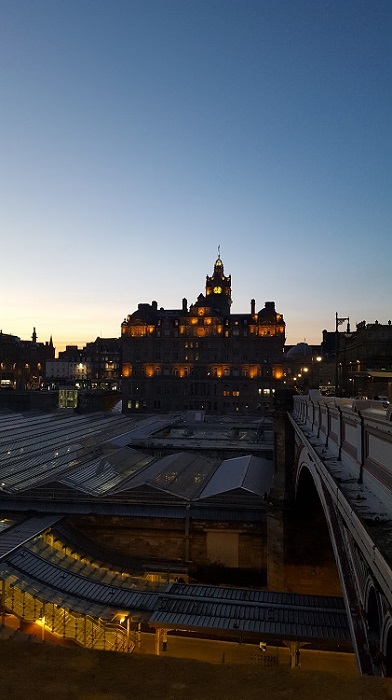 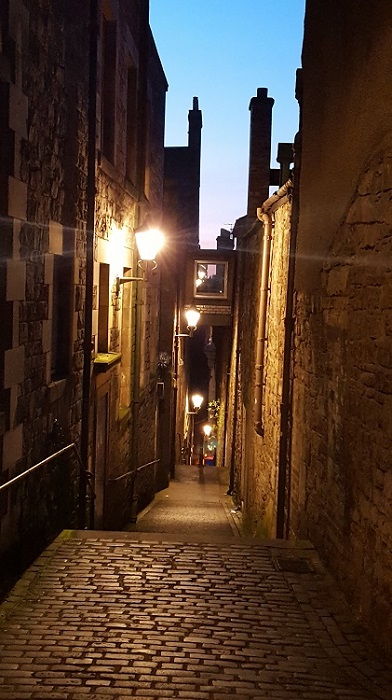 This branch of the slick, business-minded brand ticks that box perfectly. Its neo-gothic, castle-esque exterior blends in with uniform ease to the rest of the street’s aesthetic. However, having paid homage to the city’s history on the outside, a reflection of a much more modern, corporate Edinburgh is revealed once inside. After a series of touch-ups and refurbishments since the turn of the century, the hotel’s interior looks very much ahead rather than to the past.

When I arrive after a picturesque, but very long drive, I do have to manoeuvre my way around a rather complex route from carpark to lobby via a service lift. It’s here I am reminded how important – but sometimes overlooked – well-appointed signage is for guests. It’s not an ideal first impression to begin with, but I needn’t have worried as the rest of the hotel more than made up for it. 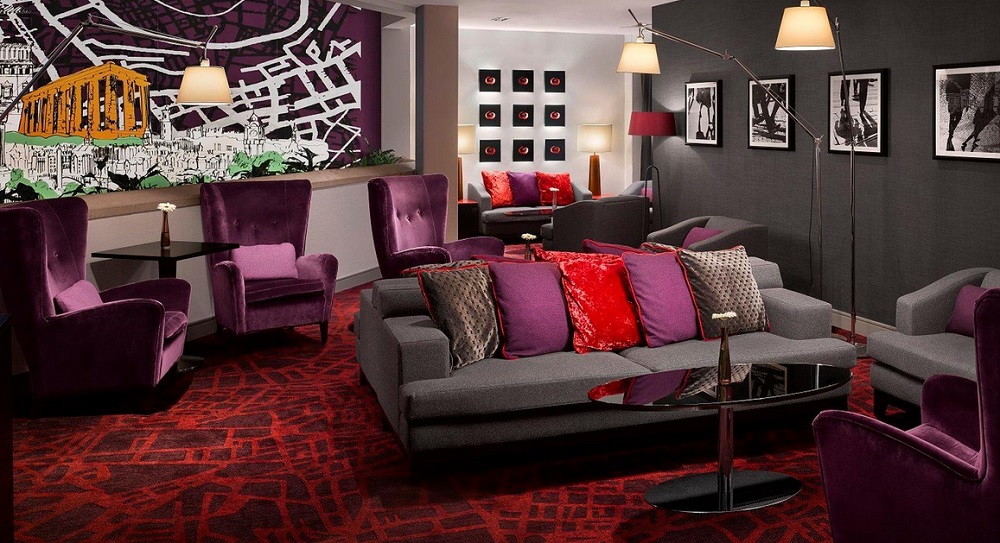 My roundabout tour of the lower levels takes me via the hotel’s main conference space – which is currently in turn-around mode between events when I sneak a peek. The room is a wonderful burst of monochrome tones in both carpets and wallcoverings, a clash of prints and the first sight I get of the ubiquitous locally-inspired artwork; it forms part of the eight meeting rooms the hotel offers, hosting up to 240 people for a range of event styles. 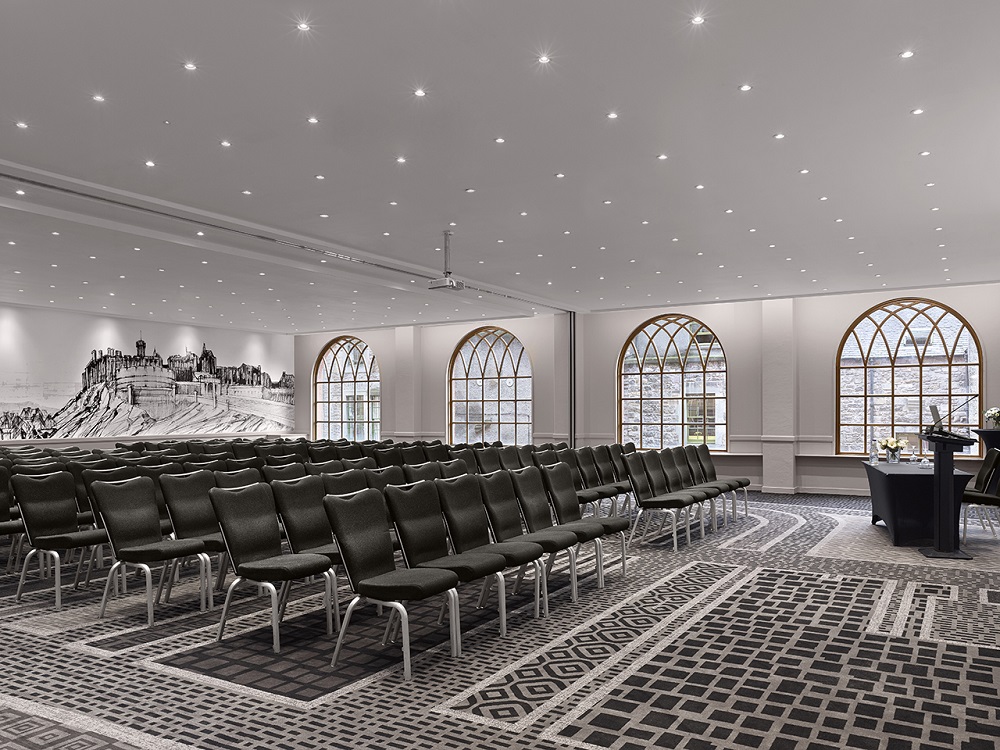 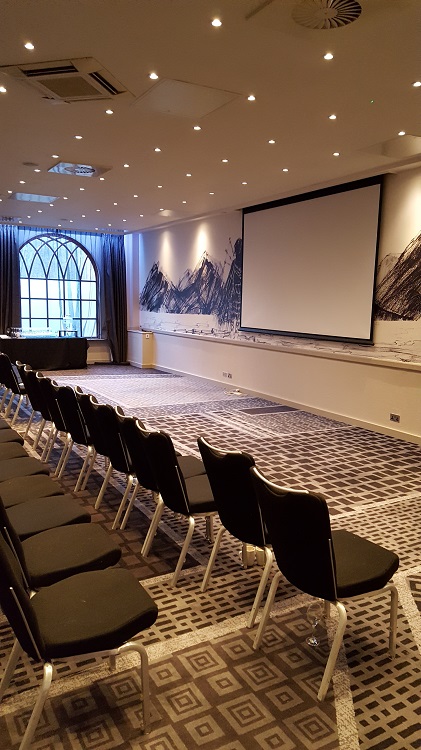 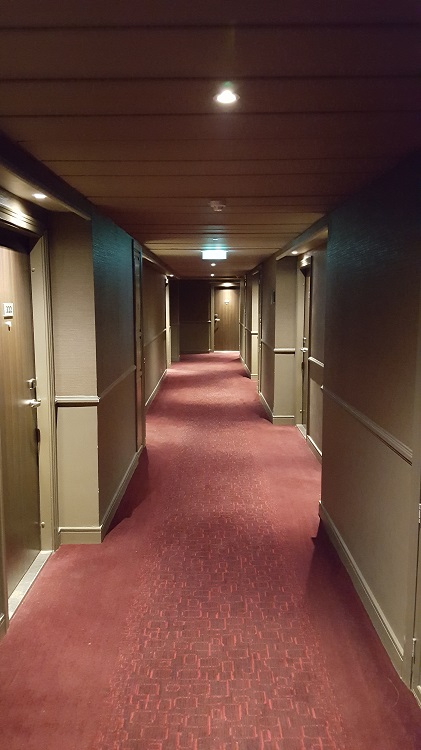 The newly refurbished and much-improved corridors

I am greeted at a busy but well-staffed reception area which also serves as an anchoring point between the hotel lounge-cum-breakout area and the food and beverage option Itchycoo Bar and Kitchen. One quick, seamless check-in later and I’m in my Business Class room – a room of the same standard as I stayed in when reviewing the Radisson Blu in Leeds, but one with a very different decor. It’s always fascinating to see how amenities remain the same, but how varied and different interpretations of the same brief can be. While Leeds relied on a metallic-inspired, blue-grey palette, Edinburgh goes for a more muted colour scheme of greys and browns in the bedroom and bathroom; with a splash of colour added by brightly-upholstered cushions. 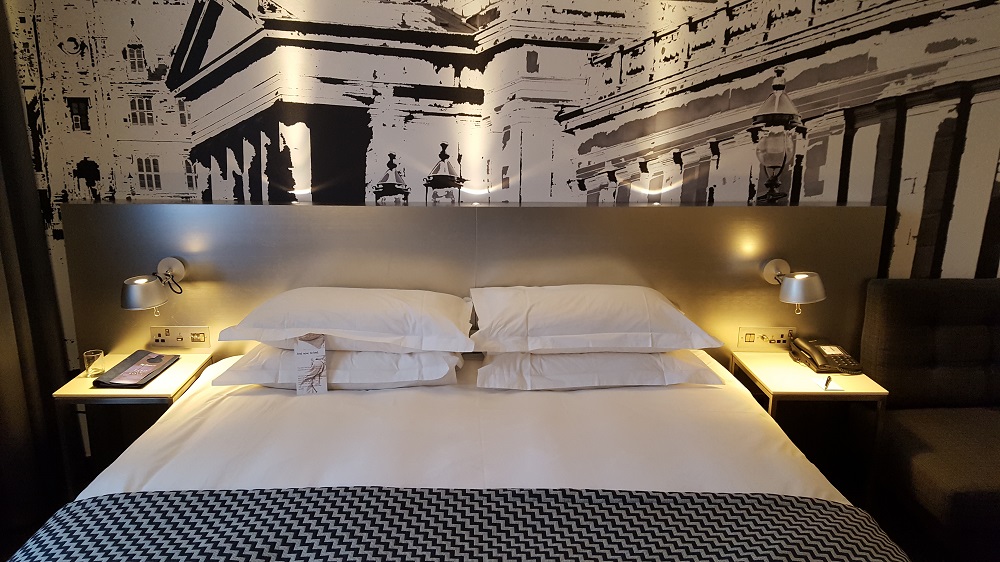 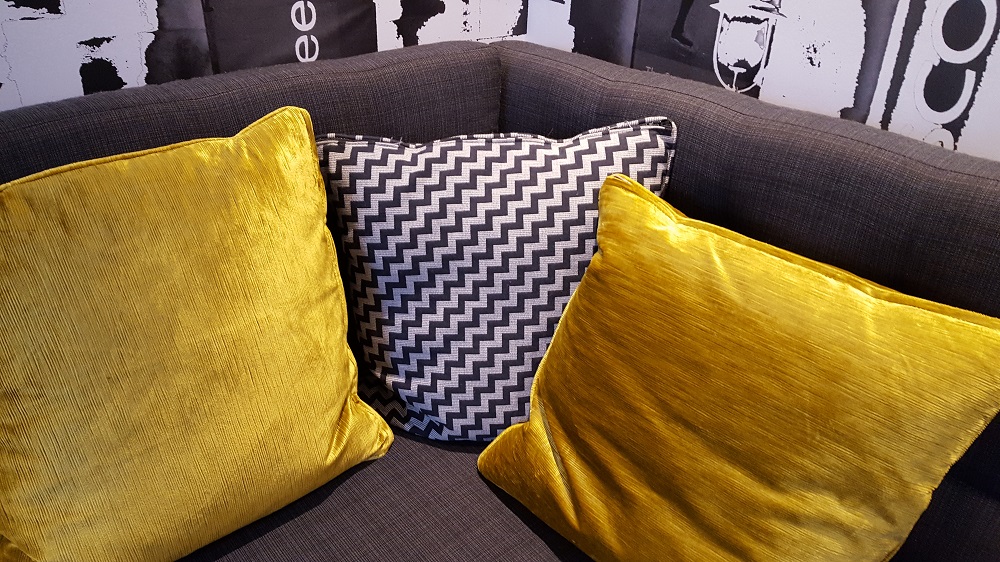 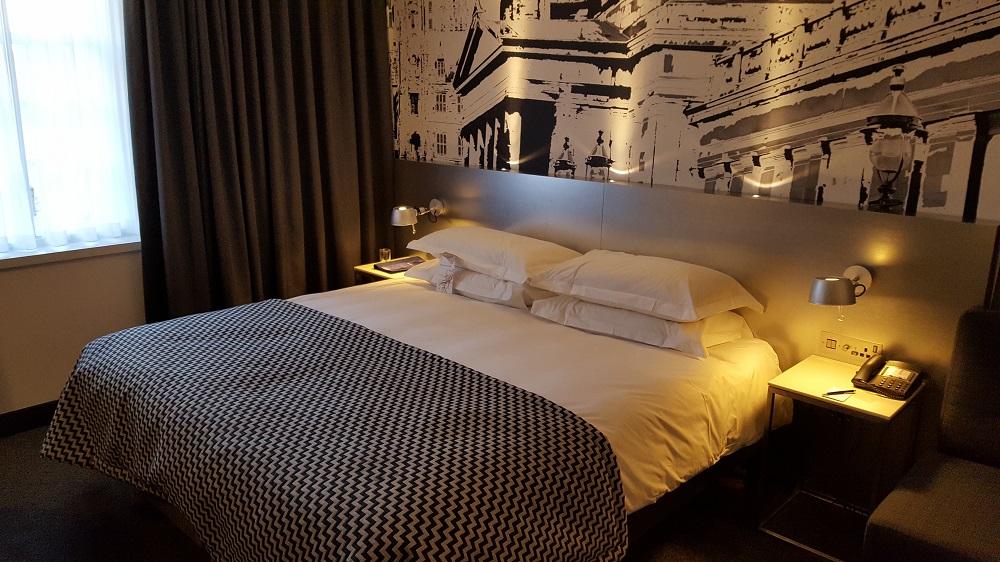 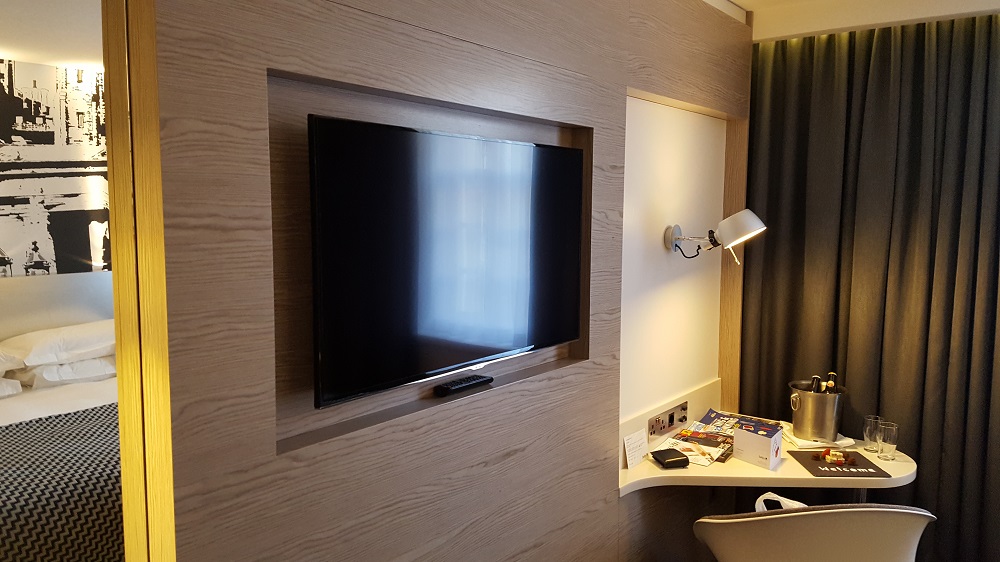 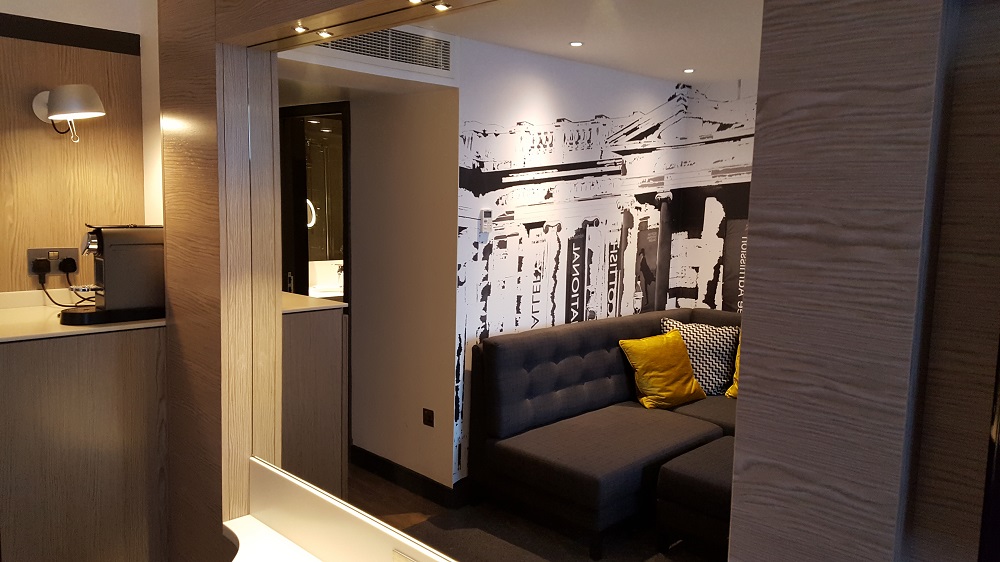 The living area is slightly smaller than I would normally expect for the price-range, but can be forgiven due to the fact the designers have managed to include everything required – and more – through good use of space. The room is dominated by the sweeping corner sofa unit, the double bed with its striking metallic headboard as well as the beautiful black-and-white artwork wallcovering of Edinburgh’s cityscape – it’s one of the better examples of a technique very much in vogue at the moment. If this is a taster of where Radisson Blu is headed with its BluPrint interior design concept, I can’t wait to see it rolled out across its global portfolio.

Other pleasing touches are the wall-mounted TV set into the wall, a decent-sized dressing mirror and a modest desk unit with ample lighting and thoughtfully-placed sockets – this is a business-oriented hotel after all. The bathroom is tastefully fitted out, predominated by dark wooden finishes and simple but elegant bathroom fittings. So far, very good. 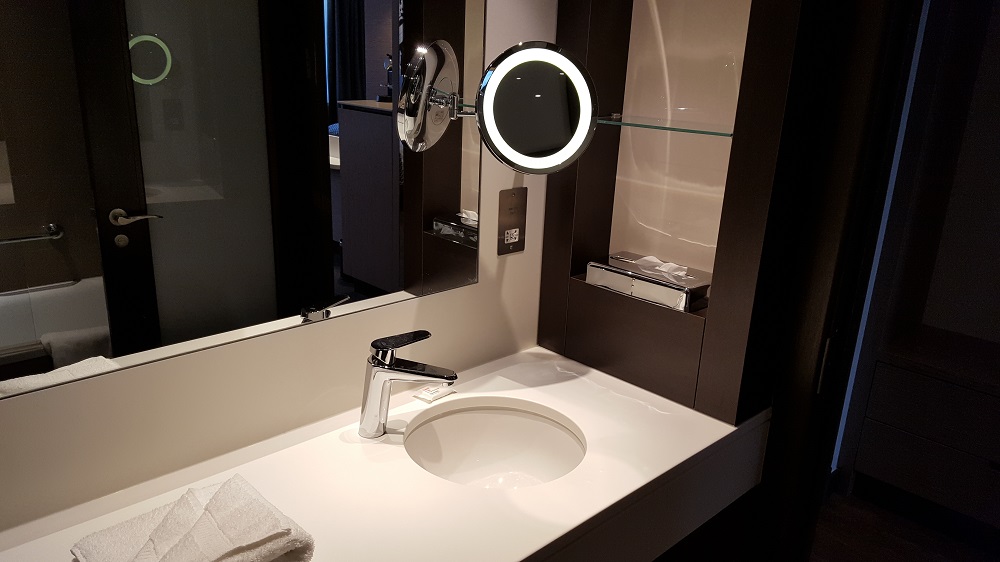 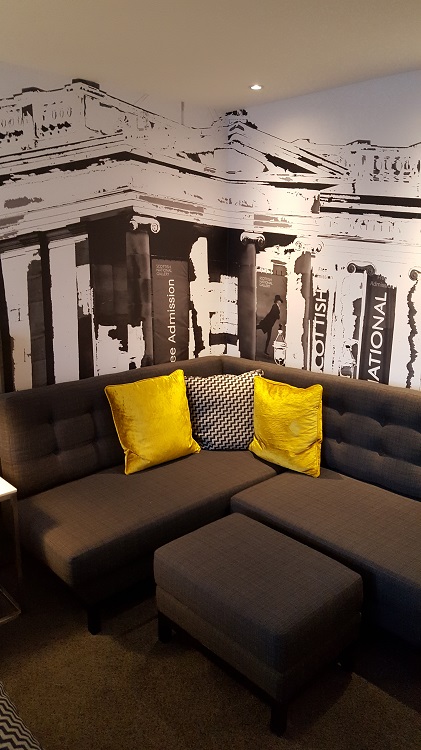 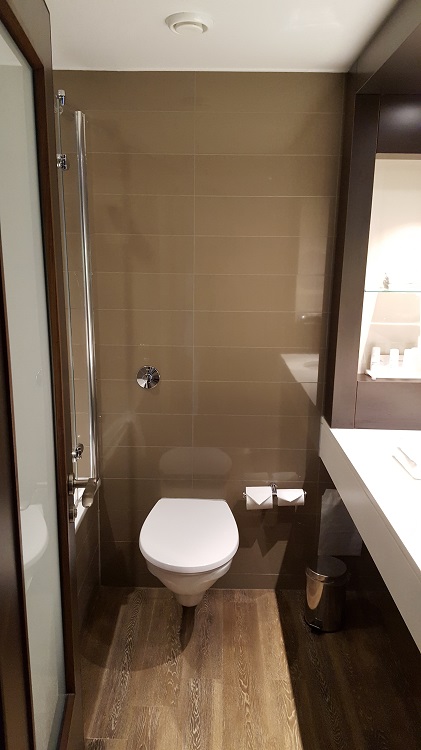 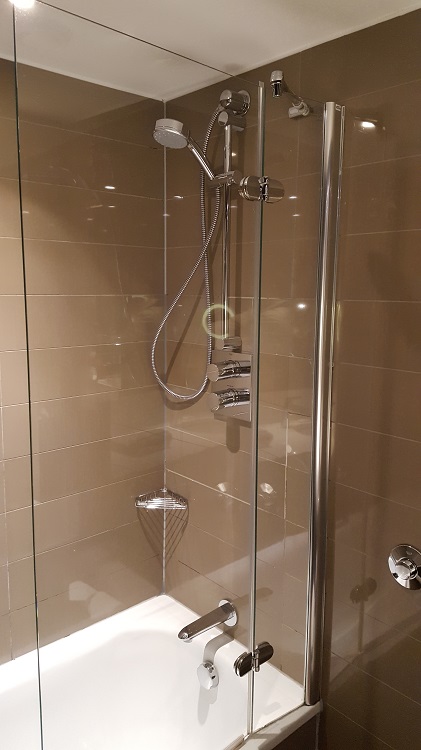 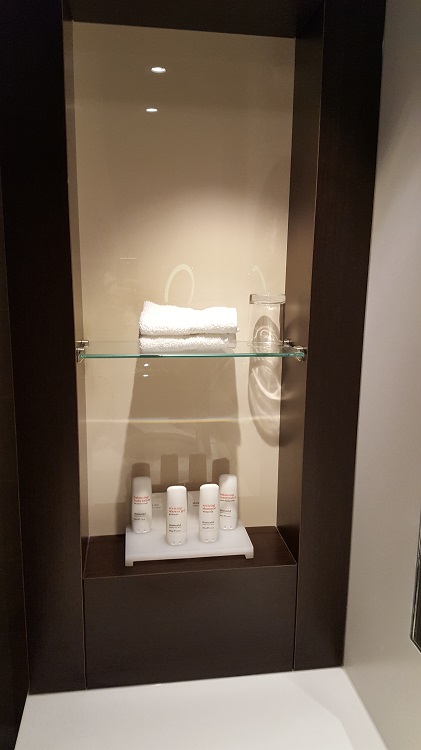 I decide to take a look at the hotel’s brand new pool and health club – it had opened mere days before my stay – which on the way to the lower levels also gives me a chance to assess the marked difference between the newly refurbished corridors and the pictures I’d seen prior to them being redone. Of particular note were the carpets as I’d been warned by colleagues in the industry of the less-than-acceptable state of them beforehand, but was pleased to see a sterling job has been done in making sure of the quality during the refurb (see above).

EDIT: The carpets throughout the hotel were provided by Newhey Carpets, who have built up a strong working relationship with the Radisson brand. They worked with Herefordshire-based Trevillion Interiors on the rooms and suites as well as the meeting rooms and event spaces. The designs were all created using Newhey’s state-of-the-art Colortec+ technology. Find out more here.

And the good news continued when I took a look at the Melrose Spa and the Health Club. This is a fantastic example of leisure design – clean lines, soft finishes and brilliant use of lighting create the soothing and relaxed environment so required of such a space. While this is open to the public, considering a good number of the guests will be corporate only in town for a day or two – having this facility will give the Radisson Blu real pulling power in a competitive city market. 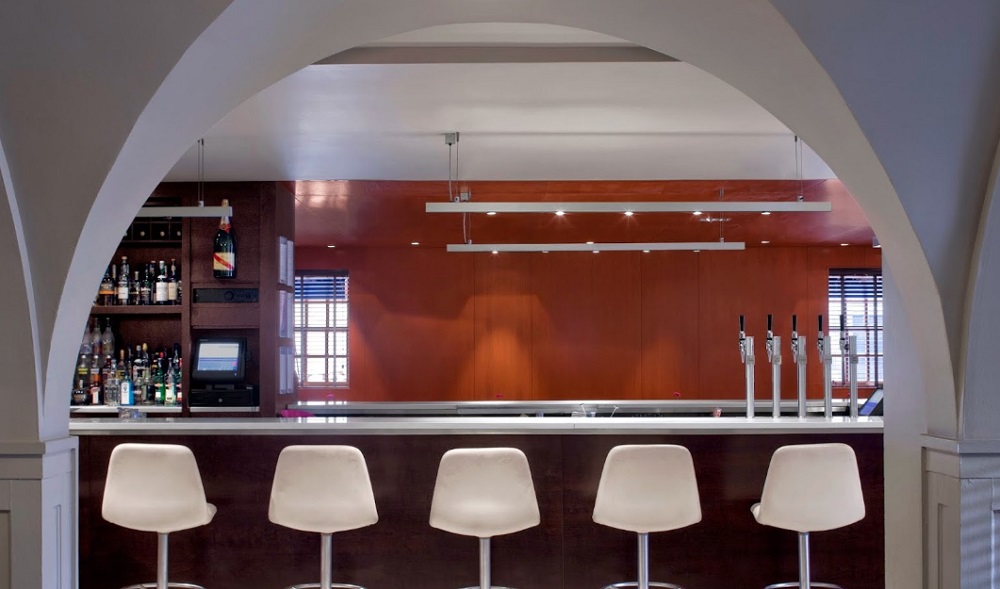 After a long day travelling up from Hertfordshire, I enjoy a cocktail or two and dinner in the Itchycoo Bar and Kitchen (FULL REVIEW HERE) – the décor of which further reflects the business orientation of the hotel. But much like the mixture of the clientele in the restaurant that evening, to say this Radisson Blu can, does or will solely cater for the corporate guest is to underestimate its appeal. Indeed, tourists contribute some £1.6 billion to the Edinburgh economy each year and this Radisson’s location will make it a popular choice for several of the 4 million+ annual visitors to the Scottish capital.

Believe me, this hotel won’t stir any great reactions for its design or décor – but its fantastic functionality, comfortable and practical finish and more-than-ample amenities will ensure it remains a reliable choice for guests – either corporate or leisure…