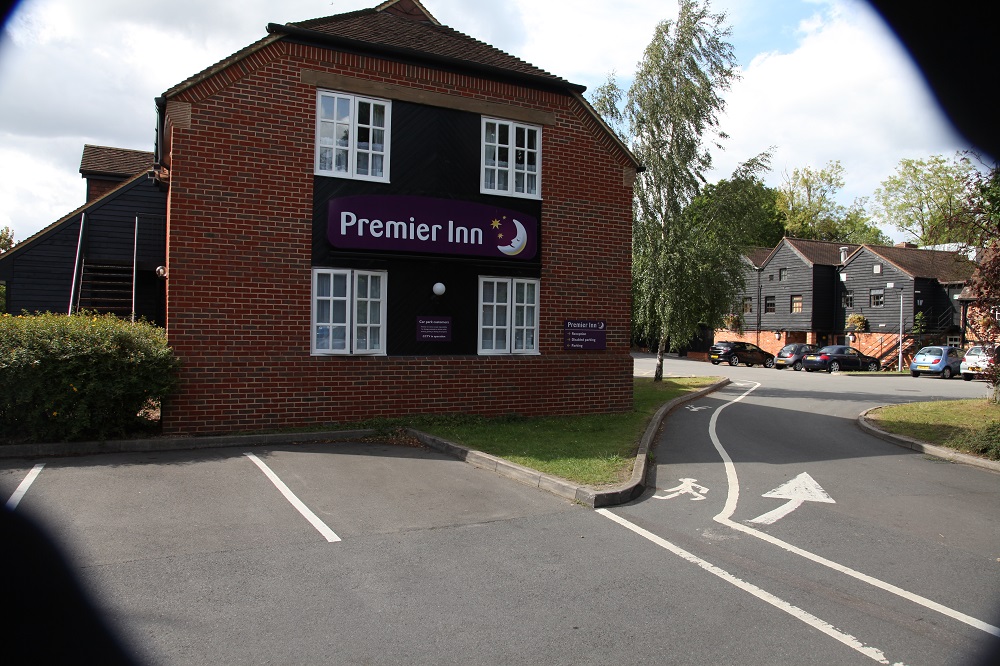 The British brewing industry has, in general, been a pretty miserable business management failure. However, two of the largest of the big brewers have been very successful in moving their business away from beers and pubs into hospitality. The famous Manet painting ‘A Bar at the Folies-Bergère’, depicting the Bass triangle on bottles of Bass Pale Ale, perhaps hints that Bass was the first to make the transition, culminating with its purchase of Holiday Inn and growing successfully into the world’s largest hotel operator, InterContinental Hotels Group.

Whitbread was a famous brewing name and for many years grew by acquiring (and pledging to keep) many idiosyncratic UK brewers such as the Boddington’s brewery in Manchester. However at some point the management realised that this romantic real ale traditionalist view of the industry was not going to work profitably in the face of the continuous decline in beer drinking in the UK. Eventually the group followed Bass in moving its mainstream business out of brewing and into the broader realm of Hospitality. Now Whitbread has a spread of half a dozen brands, including the UK’s largest budget chain, Premier Inn, with a continuous programme of expansion in the UK, Ireland, and now Dubai and India.

The expansion of the group is underpinned by the maintenance of profitability in the budget sector during the 2009 recession with underlying profits falling only around three per cent. Whilst there has been a great deal of publicity for the fight between Travelodge and Premier for the title of Britain’s leading budget chain, it perhaps a little unfair to see Travelodge as the primary competitor for the Whitbread chain. More appropriately it might be better to consider Premier Inn as a competitor for Campanile or even possibly Holiday Inn, as unlike Travelodge and other budget operators such as Ibis orEtap, Premier offers a full food service using its associated restaurant operations such as Beefeater or one of the other of its six brands in the food sector.

Premier Inn Woking is built at the side of Woking canal in a quiet location. Woking in Surrey is a surprising town growing from a market garden centre to today’s hi-tech home to McLaren and Directory company Wandsworth. The growth of the town was spurred first by the canal then by the railways and today it has a thriving local business community as well as strong commuter links into London. The architecture of the hotel is deliberately evocative of canal side warehousing with a little of farm buildings influence, all built around a previously existing canal side pub restaurant.

Those who are not familiar with Whitbread eateries may be surprised at the change being wrought in the food operation. Many hotels could learn good lessons from the healthy breakfast options, and the healthy nature of much of the offerings in the remaining meals, despite the reputation of these operations for old fashioned English pub catering. English food has changed greatly over the last 15 years and Whitbread has moved with the tide whilst keeping traditional. The standard English breakfast may still be the main offering, but not only is the healthy alternative available, but it is also given at a very competitive price. Like Travelodge, which grew out of its affinity with Little Chef and who’s menus have been so publicly reworked recently, Premier Inn took path of adding bedrooms where they had an existing pub food outlet, becoming a new twist to the tradition of the English Inn and taking many design cues from its origins.

The food operation therefore may well be pub eatery based, but the majority of the meats are char grilled, one of the healthiest ways to prepare meat. The design also remains steadfastly linked to traditional pub design, with dark timbers, hard floors and all the other touches that make pub dining the English equivalent to the Italian trattoria in its implementation of traditional folk design. It is from these roots that traditions in hotel keeping have grown. Whether from the German Gasthaus, French Pension, or English Inn the image of ‘mine host’ in an apron greeting a traveller to his inn is the hallmark of expectation for a guest. 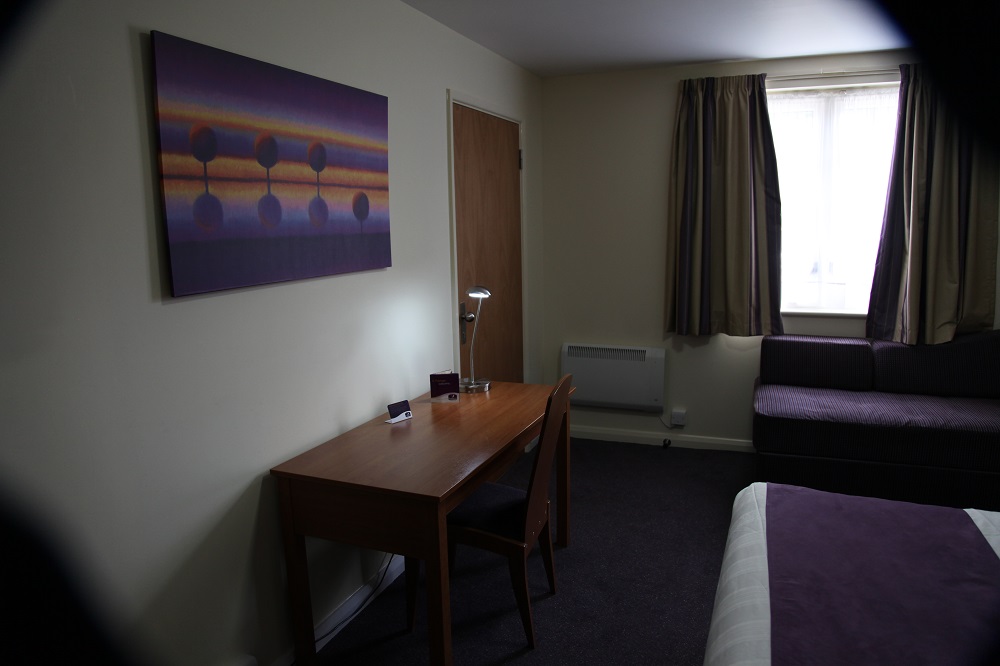 Rooms at the Premier Inn, Woking

Measured against this image, the Premier Inn did not fail. A smiling and friendly greeting conformed to the expectation – an expectation more superior hotels fail to meet (as Olga Polizzi once observed to me, “if you can’t smile at the guest, why work in hospitality?”) Reception is minimalist but functions effectively. The explanations of the food operation, the offer of a daily paper, were clear, simple and offered with enthusiasm. When pressed, the staff across the whole operation were fulsome in their praise of Whitbread as an employer, and the hotel operation was testimony to the effectiveness of the brand management and training.

Whitbread offer a clear money back guarantee if the guest doesn’t get a comfortable clean room and a good night’s sleep. Unfortunately here the new extension, whilst offering new design rooms, has been located badly alongside the car park entrance to the busy restaurant. The result is noise complaints from rooms overlooking the exit from the car park. There must be a good reason why the architect did not position the building nearer to the canal, which despite the busy road on the other side, would probably have been a quieter solution. However the rooms in the main hotel block were very quiet, overlooking a school playing field complex and abutting the canal – now a strip of nature that makes the walk into Woking centre a delightful expedition.

The corporate colours of violet and yellow are handled with subtlety, and the rooms are fitted out to the standard pattern, with en-suite bathrooms. The new design has the current fashion for large bedhead and LED bedhead lights. The work desk is large and there is free Wifi with simple connection and the desk has the sockets sensibly placed for easy access. Design is unremarkable, simple but effective. Lighting is adequate, as is the bathroom, if slightly dull.
If the competition is considered to come from Holiday Inn then the price differential , with Premier competing on price with Travelodge, is essential as the Holiday Inn interiors are far superior. Here the offering is comparable to the Travelodge chain and there is surely potential here for the rooms to be taken slightly more upmarket, as this position would be supported by the in-house food operation so missing from most Travelodges (although the revamped Little Chef may offer the competition).
If Campanile achieve their early target of 60 outlets of the quality we have reviewed in Swindon and Northampton, then both of these UK budget leaders could face a severe challenge from Barry Sternlicht’s revival of the French brand. 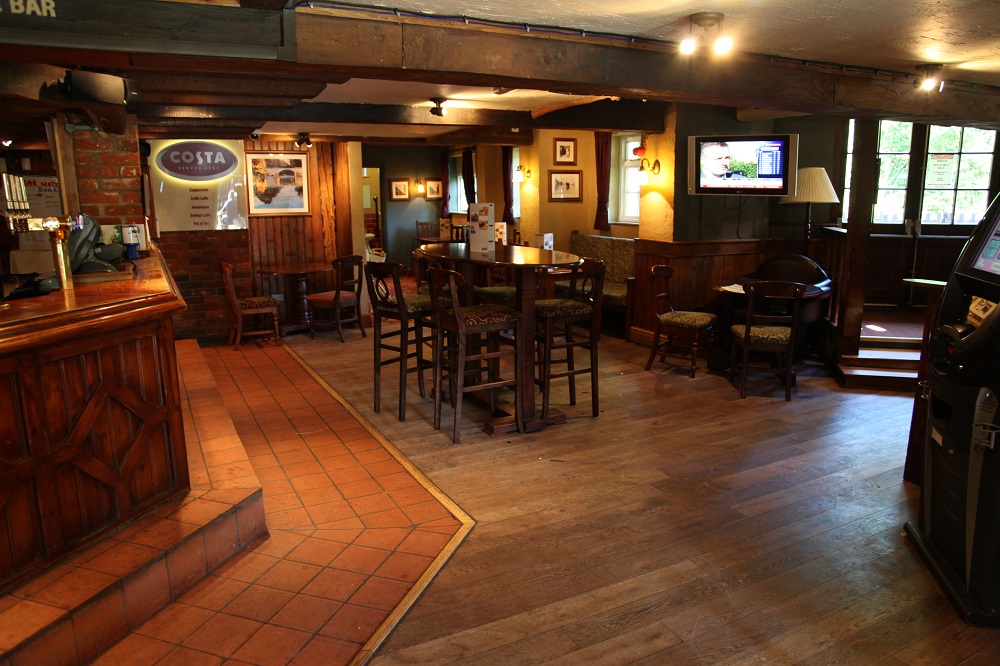 © Words and images by Patrick Goff