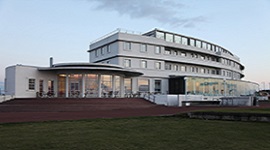 October and the sea temperature is nearly 70 degrees, and bikini clad sunbathers catch the last rays of the summer topping up their tans on beaches where the sea laps its tide of suntan oil against the unvarying line of the years detritus deposited by the waves of the Mediterranean.
In Morecambe the dog walkers are getting accustomed to layers again, sou’westers are the garb for cyclists and even joggers are wearing several layers of kit whilst the dog walkers dogs too are dressed for a gale.Across the bay the peaks of the Cumbrian fells reflect the setting sun as the more adventurous strollers race back to safety of the shore as a tidal rise of ten metres sends the waves roaring at cyclist’s speeds across the stretches of sand, cutting deep gullies slyly to catch out the unwise.

The shallowness of the bay precludes a normal lifeboat for their rescue but the RNLI has a hovercraft ready to sprint to the aid of the unwary if need be.

Recent research has shown shore dwellers live longer. That may be so, but their industries don’t. Neglect by generations of politicians has contributed to the decline of this once prosperous seaside town, as indeed it has too many of the shrinking towns in the North West. They shrink as the young and aspirational move in search of fortune and perhaps fame elsewhere, often to the expensive and overcrowded South East where the political elite concentrate on feathering their own nests rather than regenerating the declining towns of the North.

Here even the Western themed cowboy fun park is shuttered on a bleak seafront where the gleam of the Midland sounds a lonely rallying call to those who would see life return to this birthplace of Morecambe and Wise. There are few jokes in this decline, but the hotel does enjoy the quiet beauty of its near isolation in the gorgeous Lakeland landscape.

Behind the Reception desk is the Gill relief, stolen, fought over and eventually returned to its rightful place in the listed building. Click to see the spectacular lobby staircase