Checking in to The Mayfair Townhouse, London’s ‘dandiest’ hotel 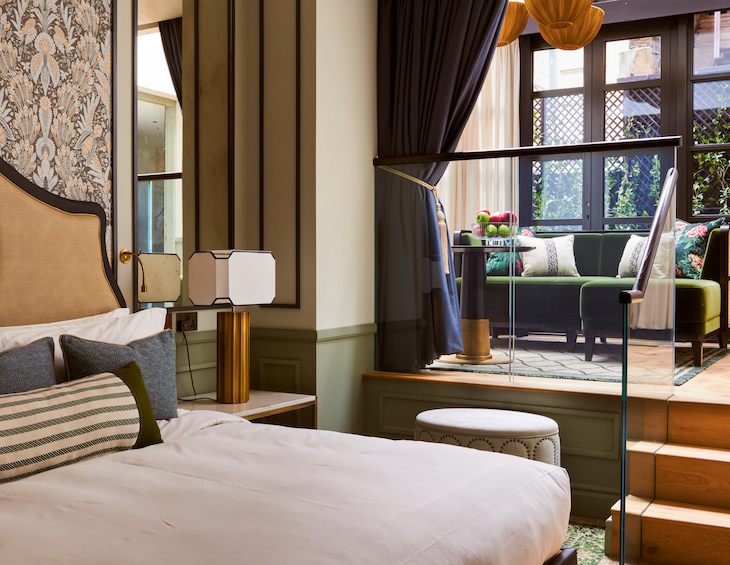 “If only these walls could talk, my job would have been so much easier,” admits art curator Minda Dowling to editor Hamish Kilburn as he checks in to explore the design narrative, drawn up by Goddard Littlefair, that spectacularly and effortlessly unfolds inside The Mayfair Townhouse…

Following what must have been the most dramatic build-up to any hotel opening in 2020, The Mayfair Townhouse, which is made up of 15 Georgian townhouses (seven of which are Grade II listed buildings), has officially arrived in London.

Having myself teased our readers to expect a 172-key luxury lifestyle hotel unlike any other in the W1 postcode – think Oscar Wilde meets Alice in Wonderland – I was intrigued to explore how award-winning design firm Goddard Littlefair and the design team at Iconic Luxury Hotels had masterfully layered the flirtatious motif of being completely ‘dandy’ throughout the latest luxury lair to appear in Mayfair.

“One of the challenges with getting the tone of the styling right was to not overplay the themes.” – Jo Littlefair, co-founder, Goddard Littlefair.

“Determining the direction for the concept took some time as it was clear that the design could have developed into a couple of distinctly different routes,” Jo Littlefair, co-founder of Goddard Littlefair tells Hotel Designs. “We eventually reached the conclusion that we would pursue a contemporary rendering of the style of the ‘Dandy’ to befit the Georgian architecture while feeling bedded in present-day Mayfair. One of the challenges with getting the tone of the styling right was to not overplay the themes so that while the fabric of the design all serve to allude to extravagant dress sense and rich textures and colours we strove to do so in a way that the interior is still comfortable to be in, subtle in it’s story-telling and essentially doesn’t labour a concept to the extent that its charm is lost.” 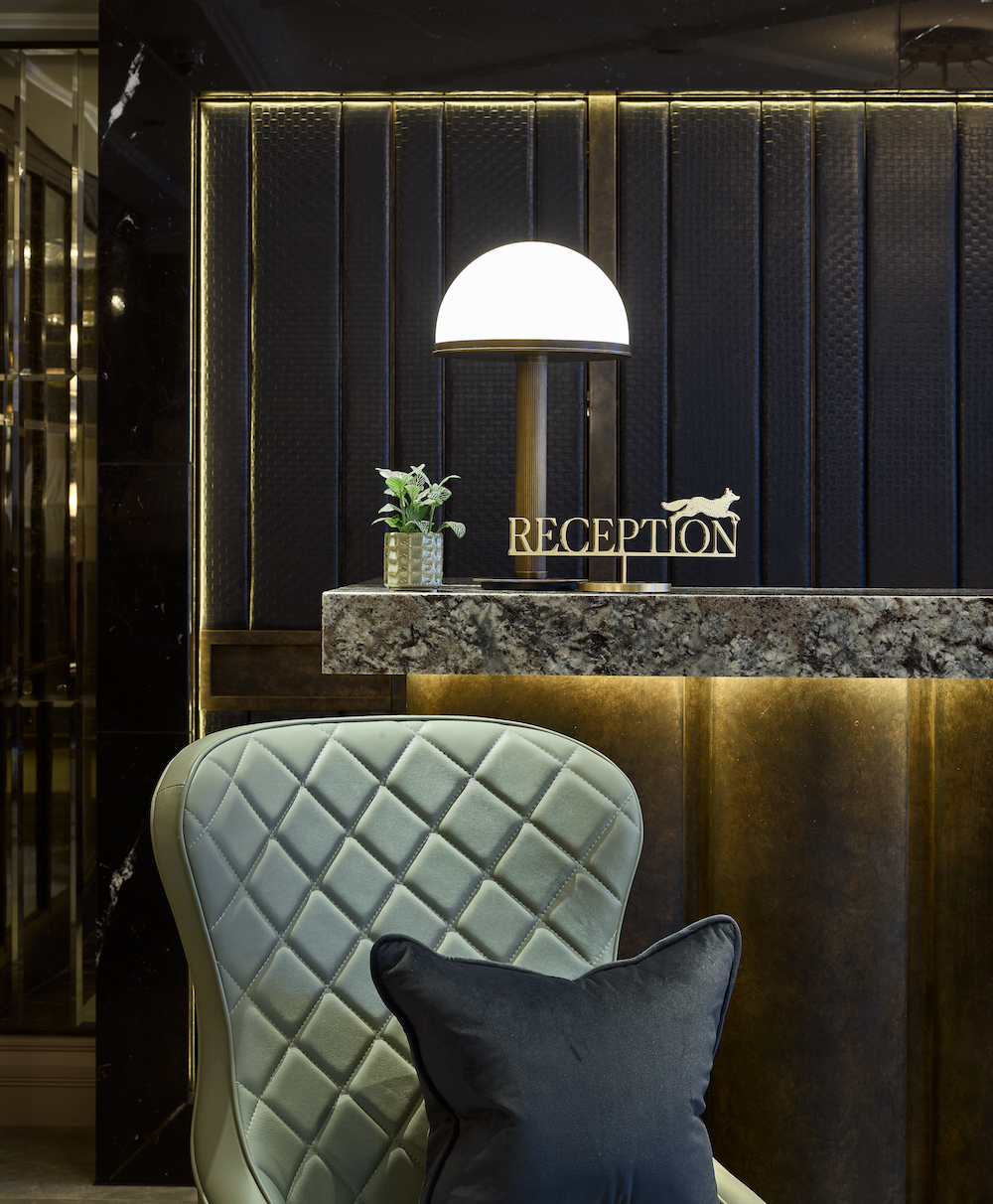 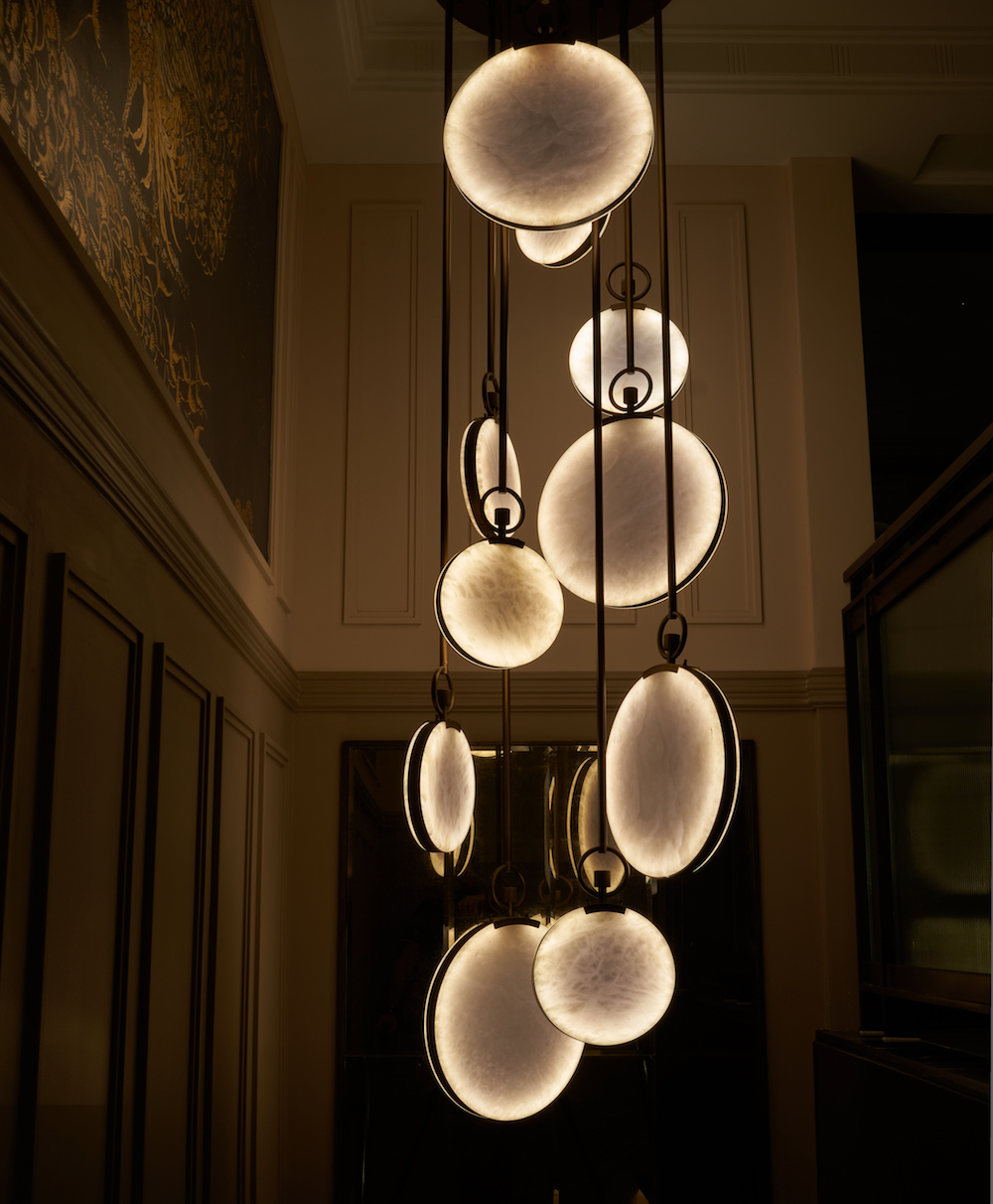 Soon after walking through the main entrance to what will no-doubt be the warmest of welcomes from the front-of-house team, you have entered a different world; an adventure into the unknown where a 67-inches-tall peacock made out of no less than 25,000 Swarovski is the first indication that this hotel is going to anything but ordinary – and foot trails of a friendly fox will follow your experience from here on in, because why not? 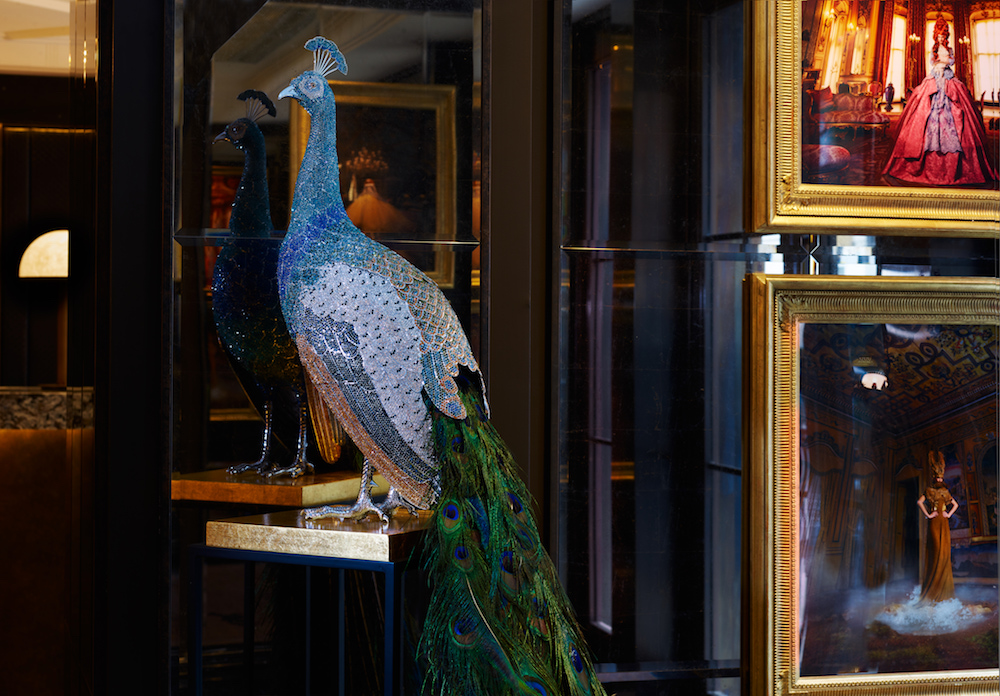 Past the tasteful walkway towards the lift, where a delicate installation depicting gold leaves effortlessly grows on the ceiling, up five floors and along the rabbit-warren corridor, you will come to suite 519 – otherwise known as The Skyline Suite.

In true Goddard Littlefair style, the design and layout of the suite perfectly complements the original architecture of the rooms – it automatically feels like a home-from-home in Mayfair. “We wanted to bring an extra level to this suite,” explains Littlefair. “Put simply, we wanted to bring as much day or moonlight into the suite as possible.”

To achieve this, the design team have installed a partially glass ceiling that sets it aside from others in the hotel. This gives the suite a contemporary, almost James Bond moment that Littlefair describes as “complementing the opulence of the suite.” This eye-catching feature encourages guests to do what few people in London are able to master: to look up! By night, to avoid distraction, the large window into the above sky can be covered by a ceiling blind, which is conveniently controlled remotely from the wall switches.

On closer inspection, one can’t help but notice the finer details: the leather handles on the drawers, sophisticated paneling throughout and brushed brass light switches, which together create a timeless and balanced feel – not pushing the themes to the point of exploitation, but instead caressing their true meanings.

In the bedroom, which is arguably the most important element within any hotel, the bed is gargantuan! Two chunky, marble-top bedside units sit beside an emperor king size, navy-blue, bed which commands the room and is complete with a plush, oversized headboard. Sleeping on a comfortable Harrison Spinks mattress, there is no compromise on luxury and guests are guaranteed a pleasant night’s sleep. 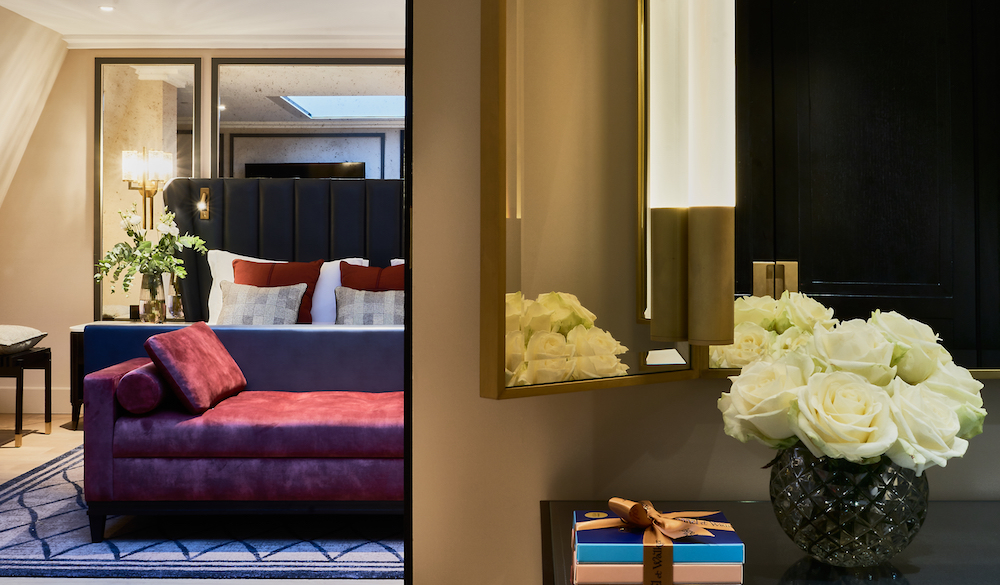 Around the room, a juxtaposition is apparent in the art, which traditionally frames modern and fashionable prints of glamourous women with vibrant birds cleverly interrupting the mise en scené to present something unapologetically different. This seamless reference of nature is complimented also in the soft furnishings and, in my opinion, is further evidence of a meaningful working relationship between art curator and interior design team.

On the other side of the suite  – past the corridor which features a relaxing workstation and dressing area – is a large marble-tiled bathroom, which naturally evokes a sense of calm and features a deep freestanding bath and a separate shower enclosure. “The layout we could achieve meant we had a fabulous bathing experience with the roll top bath, double vanity and huge walk in shower,” adds Littlefair. With demands elevated around how wellness is offered within hospitality, it is reassuring to see that the design team specified high quality products, such as hansgrohe showers, AXOR fittings, Roca toilets, Geberit flush plates and Kohler his-and-hers vanity sinks. 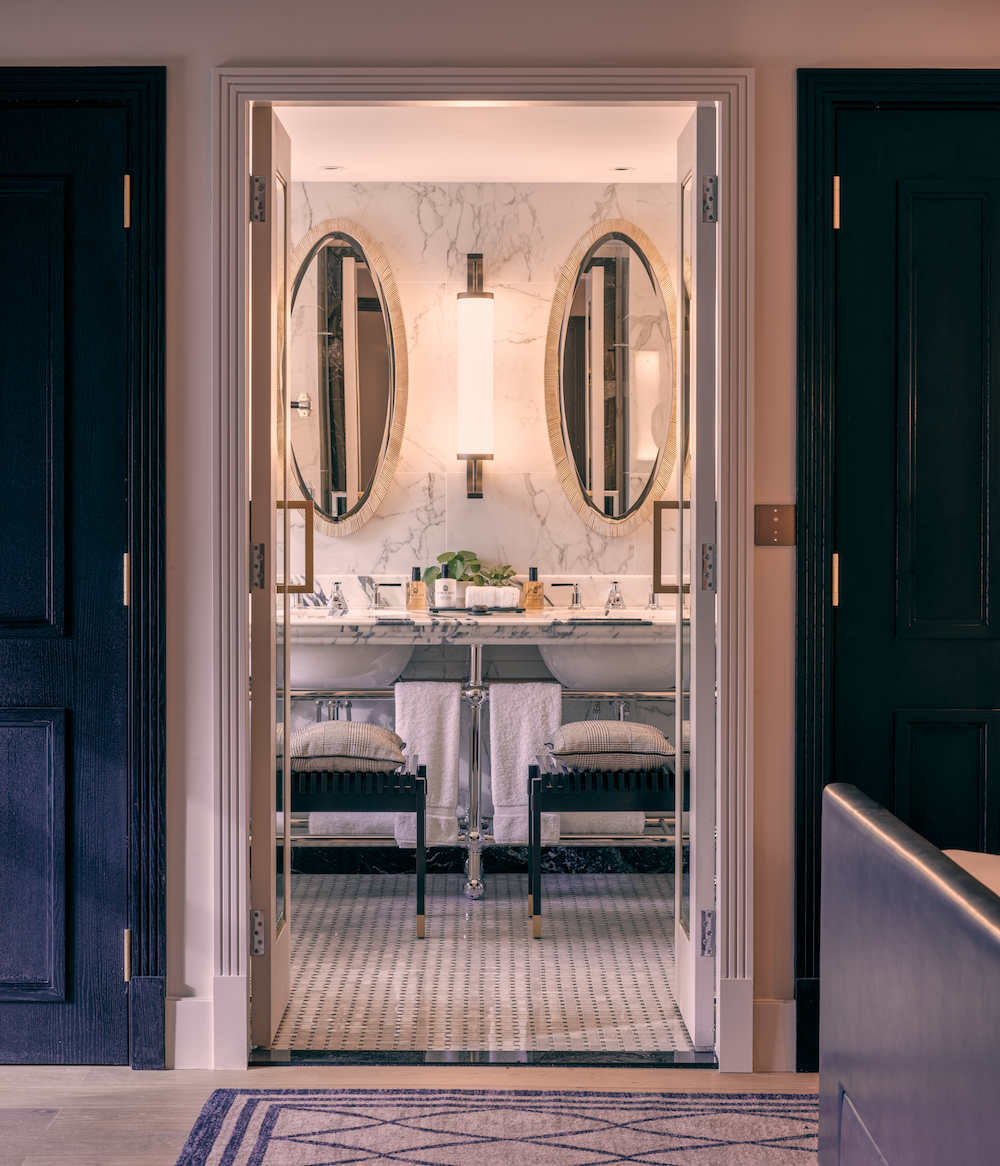 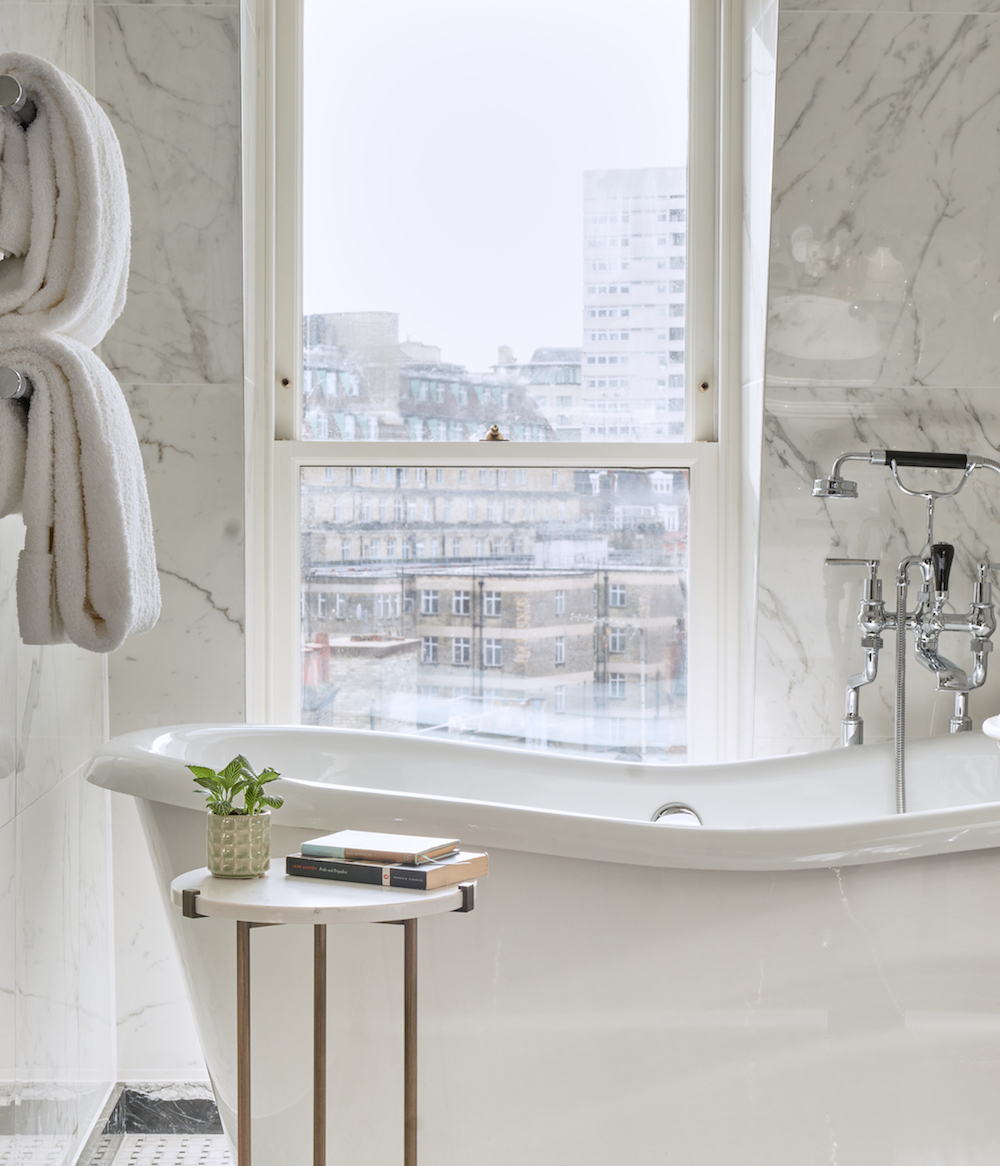 Although the guestrooms and suites are impressive, in order to capture the full narrative of the hotel, guests need to spend time downstairs in the F&B areas. And nothing is what it first seems.

First of all, the Dandy Bar has all the ingredients to become an iconic destination bar – think Soho House but without the members’ fee (and friendlier staff). With a cocktail menu that amplifies the hotel’s brand, the area when full with guests and locals alike will very much become an extension of the design itself.

Behind the concierge desk in the lobby is a staircase that leads down to the basement, which weaves itself to more F&B areas, event spaces and the gym. Acting as a fitting backdrop for this staircase is large mural entitled: “Peacock Mural”. It displays two peacocks, feathers erect walking towards each other to embrace. The style of this piece, which is acrylic painted with faux gold leaf and varnished on canvas, embraces the Aesthetic Movement. This era, which lasted from 1860 – 1900, aimed to escape the ugliness and materialism of the Industrial Age, by focusing instead on producing art that was beautiful rather than having a deeper meaning – ‘Art for Art’s sake’.

In the basement, the Club Room is where breakfast is served. Impressively, despite being located on the lower ground, the design team have masterfully made this space light and bright with subtle nods to the hotel’s sense of place, such as a mural in the function room entitled ‘Green Park’, which through wedgewood, three-dimensional style reflects an idealised image of Green Park and includes characters from the hotel. It is here where the hotel’s art narrative really comes into its own.

With an endless stream of inspiration from all centuries that the design team could have captured, in a bid to challenge convention in a meaningful way, the decision was made to create their own narrative.“Usually the brief for hotel artwork is to appeal to as many people as possible, to be inoffensive as well as relating to relate to the location and the design concept,” adds Littlefair. “Luckily the developers and Iconic Luxury Hotels, as a hotel brand, were much more open to interesting suggestions and, through working with art consultant Minda Dowling, had the courage of their conviction to pursue a significant amount of portraiture.” 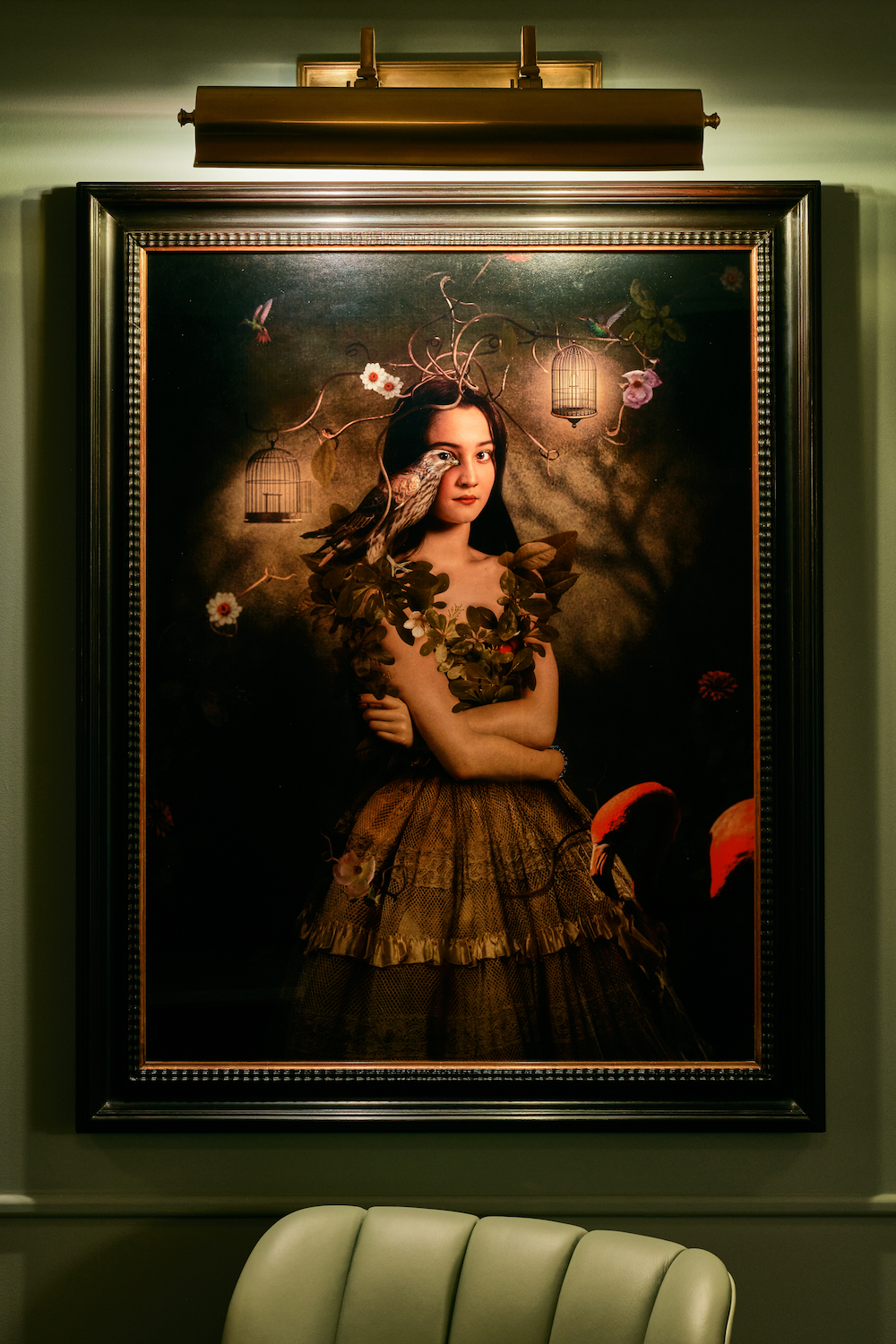 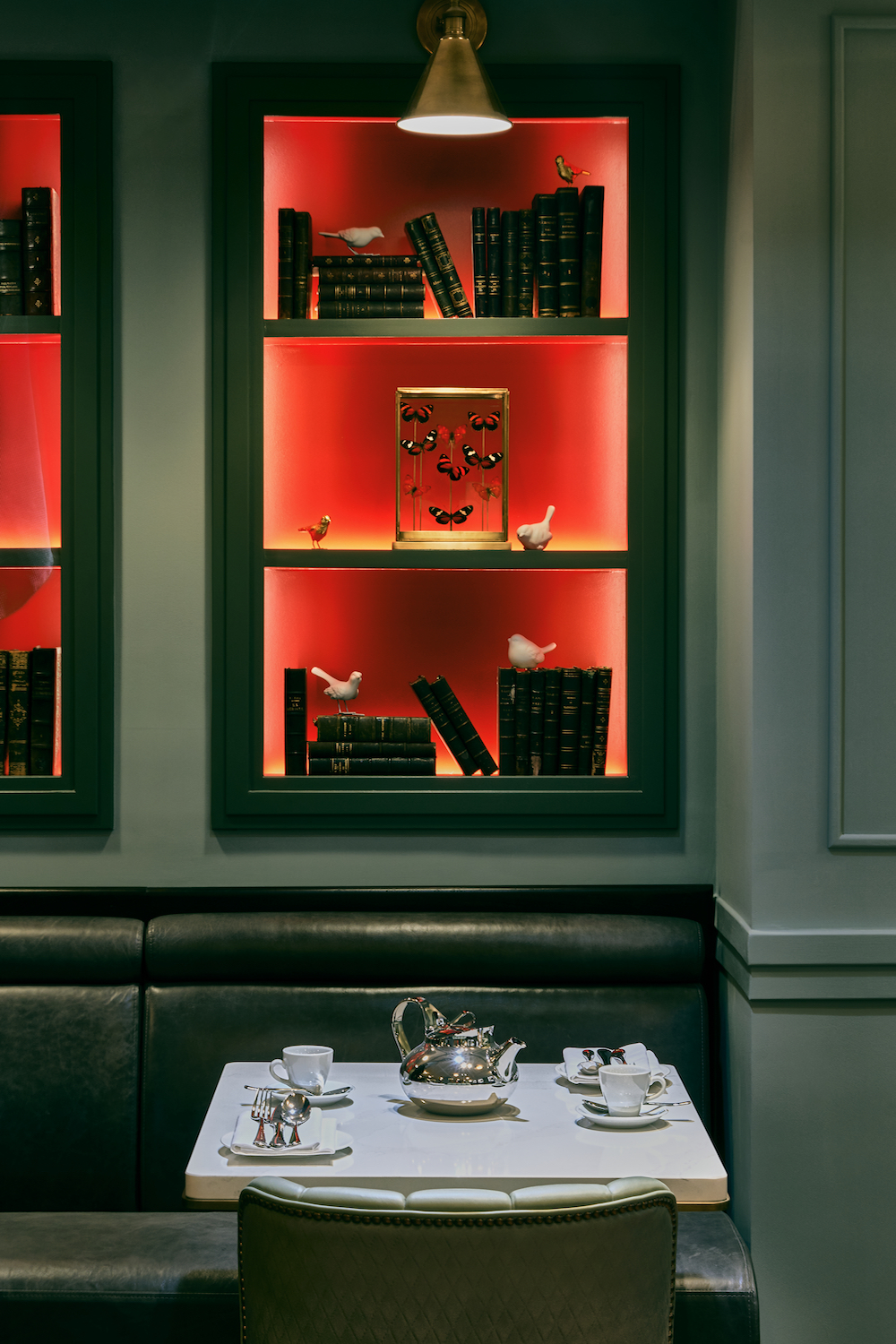 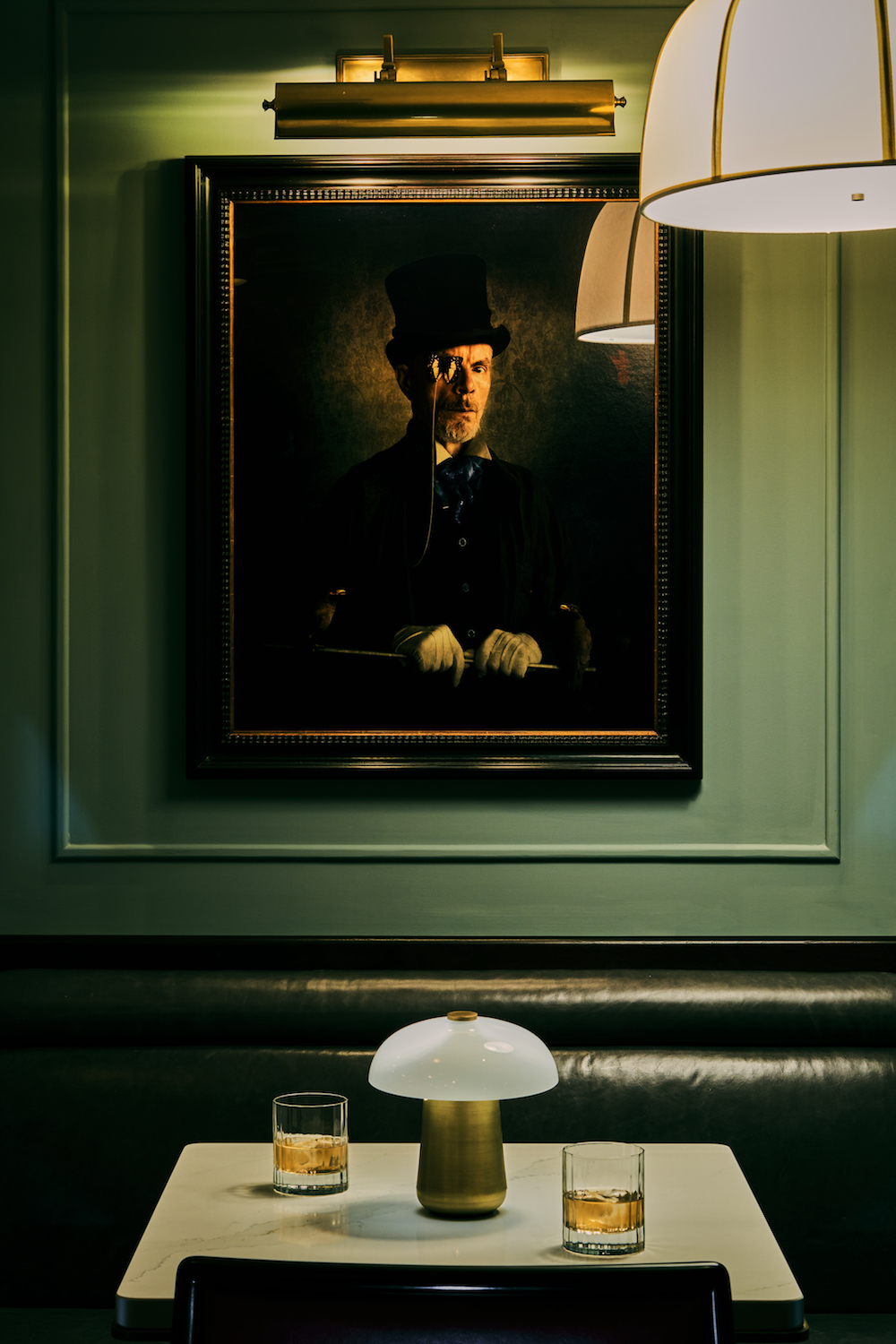 Meet the fictious Renard/Reynolds family, who were cloth and silk merchants in La Rochelle, France, and fled to London in 1688; they were amongst the wealthier Huguenot refugees as Jean Renard had sold all his stock for gold, prior to embarking for England.

In the Club Room, the complex characters of the family are referenced around the walls, such as the ‘Butterfly Hunter’ and ‘Twins’, among others.

Littlefair explains: “For me, I think the art demonstrates that the Mayfair Townhouse accepts that, as human beings, we’re all capable of being imperfect sometimes and this hotel celebrates those fabulous moments that transpire because of that very spirit of adventure.”

Quick-fire Q&A with the designer

Hamish Kilburn: If you could go for dinner with one of the Fictious Renard/Reynolds Family, who would it be with?

Jo Littlefair: I’d have to say the mother, Mum’s know everything don’t they?

HK: What is your favourite cocktail on the menu?

HK: What will you remember most about this project?

JL: Guarding the Swarovski peacock from builders as we were deciding it’s final positioning in the hotel lobby.

HK: Describe the hotel in a sentence or less?

JL: This is a hotel brimming with personality and stories to tell, it has a glamorous beating heart in the Dandy bar with sumptuous, residential bedrooms that are a real sanctuary in the heart of Mayfair

HK: Favourite piece of art in the hotel? 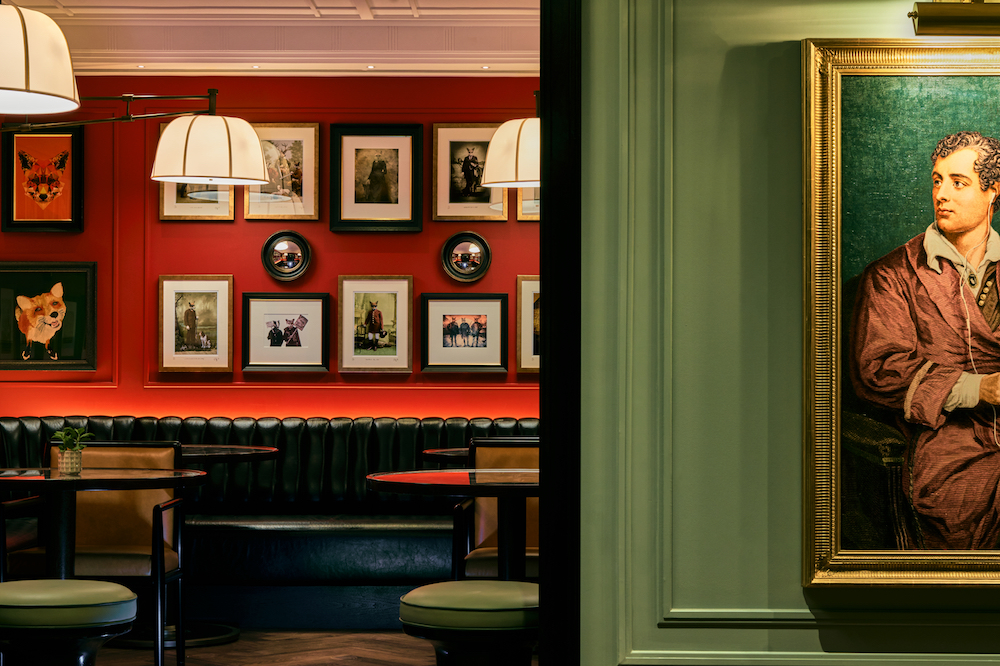 Also in the basement are several break-off meeting and private dining booths, one of which is named the Oscar Wilde, Oscar’s Study, in which the design cleverly blends together two prominent themes of the hotel: the true definition of dandy and the fox. On the wall, an interpretation of a fragment of a well-known painting of Oscar Wilde reclined on a sofa, which focuses on his jacket, reflects luxury and the laid-back attitude of the smart dandy. Meanwhile, a chandelier by Moooi is (whether it is intentional or not, I do not know) references fox-proof, mesh fencing. 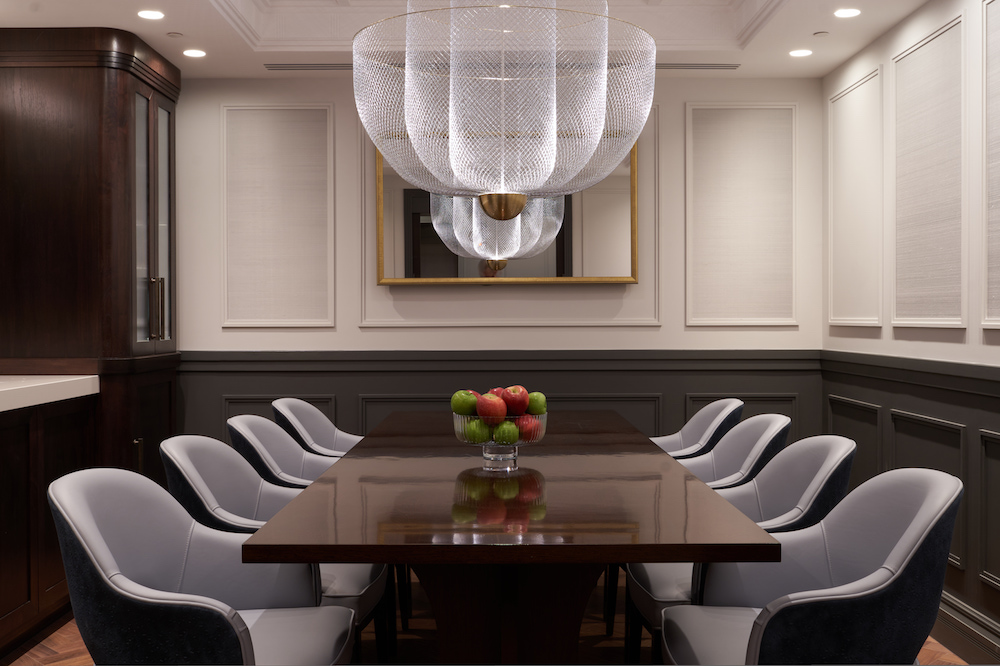 It’s one thing for a hotel to open in Oscar Wilde’s pre-Soho territory, but it is another thing entirely to focus a hotel’s theme, In Wilde’s old scandalous stomping ground, around Mayfair’s perhaps forgotten characters.

Checking out feeling, well, quite rather dandy, with a spring in my step, I feel as if I have discovered a completely unique London jewel – one that nods to all eras of this iconic neighbourhood. With its own quirky and bushy-tailed attitude, please join me in welcoming The Mayfair Townhouse to its new bachelor quarters.