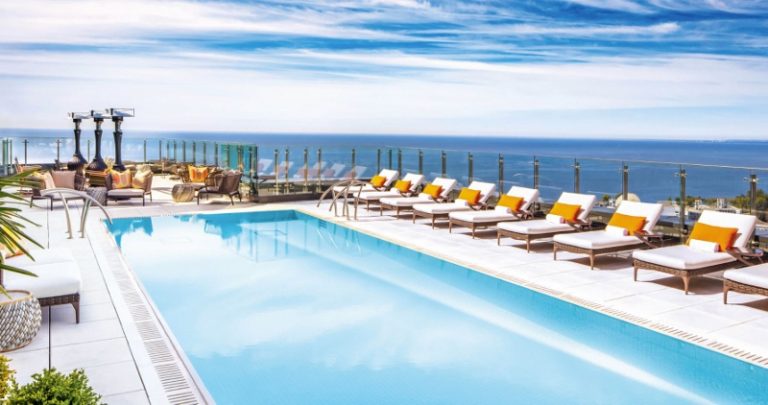 Imagined and designed by Stephen B. Jacobs Group and Andi Pepper Interiors Design, the hotel opened in March 2018 with the aim of creating an extravagant and contemporary hotel with dramatic flourishes. Using its unparalleled location and striking views as a design and architectural reference, X certainly does now mark the spot near Liberty Village, which becomes directly apparent when checking in.

Upon arrival, guests are immediately welcomed into the hotel’s towering size combined with unassuming elegance. On the exterior shell, reflected beams of light hit the glass building, which creates a colourful display in an otherwise grey, and somewhat sombre business district. Despite the hotel, with its state-of-the-art technology and business facilities, appropriately keeping in line with the suit-and-tie scene that surrounds, personality pops out in unassuming moments. In the entrance, for example, monochrome, geometric flooring that has been sourced from all corners of the earth is the perfect metaphor to represent the city as a place where people meet from around the world. 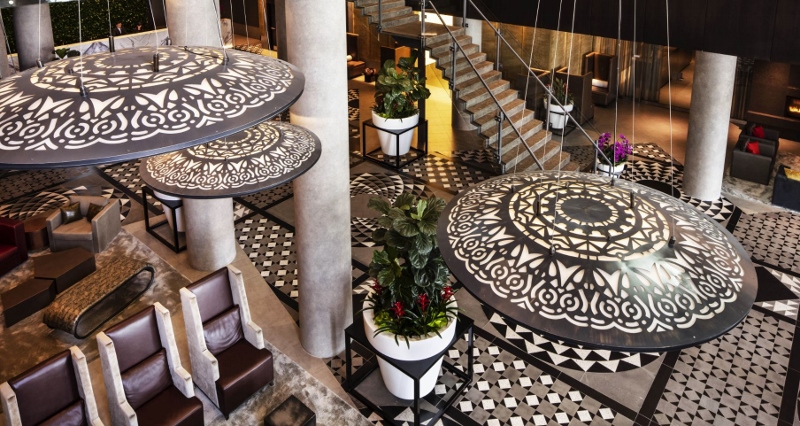 The hand-cut marble reception desk sits in front of a living wall that covers the height and width of the lobby and creates an instant sense of peace that is far removed from the metropolis outside. A grand staircase on the right leads to a glass bridge that overlooks the spacious and minimalist area and offers a platform where guests can enjoy the lobby area from a different perspective, such as an up-close look at the detailed circular patterned chandeliers. 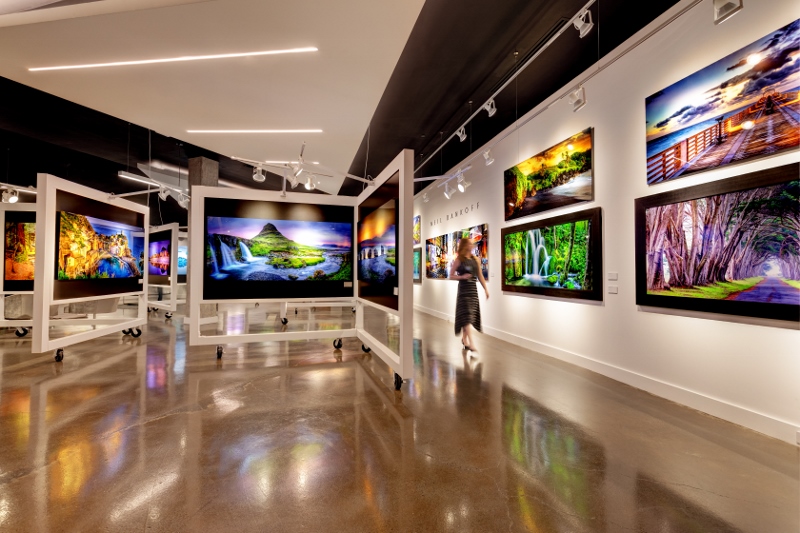 Art is a prominent theme captured throughout the hotel. A gallery on the ground floor is devoted to photographer Neil Dankoff, whose landscape pieces famously led him to become a staple on the art and photography scene in Toronto. His ‘Kandy Gallery’ commission with Hotel X, which sees his signature images that depict worldwide adventure hung on the walls, turned out to be the largest fine art photography transaction in Canadian history. Dankoff spent almost three years travelling the globe to capture more than 800 landscape photographs that were purposefully commissioned for use within the hotel. Hung in such a way so that guests notice an eye-catching canvas of natural beauty around every corner, Dankoff’s work is quite literally written on the walls. Cleverly, his work from the gallery filter into the guestrooms and suites, resulting in a further reclined backdrop. The guestrooms and suites that offer a lake view incorporate water within the pieces, whereas the rooms that face the city skyline contain more physical features such as woodlands and rock formations. 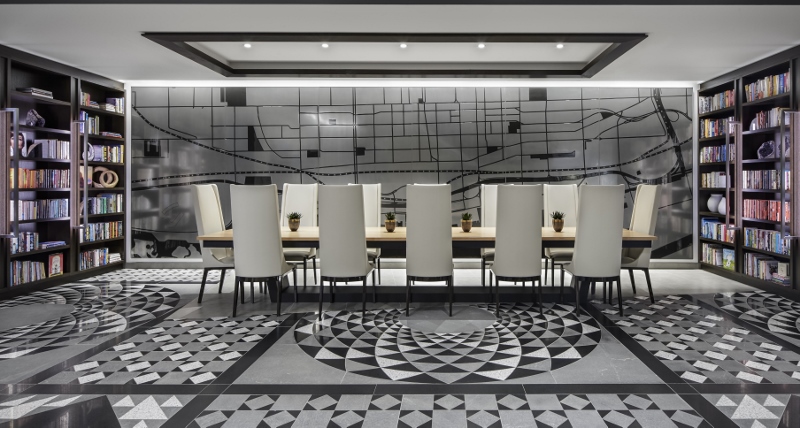 The gallery is a strong design unique selling point that positions Hotel X in a league of its own, but the adjacent library, complete with an oversized statement floor-to-ceiling bookcase, is another design centrepoint. Set in a monochrome setting, which is filtered through from the lobby area, the library’s matte-silver backdrop creates a sense of place with a carved map of the famous downtown area embossed in black paint. The space, which is open to both guests and the public, has been sensitively designed to offer guests a tranquil working environment.

The ambiance within the ground floor corridors changes from the other public areas as the walls transform from a soft cream to white light glass panels. Placed side by side, these LED flashes create a chequered wall that both reinforces the Hotel X brand while also boosts new energy in an area that is lacking natural light. 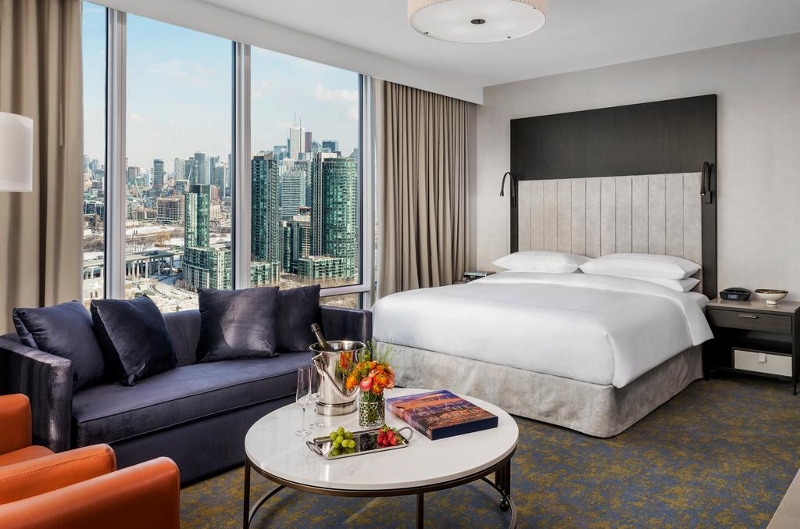 Taking full advantage of the complete Toronto skyline, each guestroom and suite features floor-to-ceiling windows. The spacious living quarters in the suites, which are filled with natural light, blend blues, greys and blacks into dark-oak fittings. Bright, block colour in the furniture infuses the right balance of personality. The sliding doors between the living areas and the bedroom keep the space open at all times and flooded with natural light that flows, like the carpet, throughout each room. The large beds with cream headboards create another layer of calmness that is occasionally interrupted by loud accents in the furniture.

“The glass conservatory has been built on several 18th century military forts.”

New Fort Hall is a unique area of the hotel, not only for its visual appeal but also for its way of retelling history. The glass conservatory has been built on several 18th century military forts. Instead of demolishing the ruins completely, the design team incorporated them to create an eye-catching venue space. The glass floor quite literally allows visitors of the hotel to look down on the original floors of the military barracks. The room itself provides a beautifully simplistic contrast between the old beneath and the modern metropolis that can be captured through its glass.

“No stay at Hotel X is complete without a visit to the 28th floor.”

The hotel supports multi-level sports halls that have been positioned in such a way to overlook some of the city’s largest sport stadiums including BMO field. Adding to this motivation is the personalised EGE Atelier carpet, which divides each area with the lyrics to the song ‘imagine’ by John Lennon.

No stay at Hotel X is complete without a visit to the 28th floor, which is where the vision for Liberty Village’s new era of luxury was conceived from. Both the rooftop Falcon SkyBar and heated swimming pool on the top floor offer guests the ability to experience the city from a VIP-perched level. The iconic three-level bar balances relaxation, style and drama. The suede purple wingback chairs sit alongside other gold and grey suede seating that tributes the colours of the sunset that reflects off Lake Ontario.

The 404-key Hotel X is more than just another urban hotel with a view to pop up. Unlike other hotels in the area, Hotel X took on mission impossible to help transform the largely undiscovered area of Liberty Village into a luxury tourist hotspot that was also equipped to take bleisure travel to new heights. Through design lenses, it has completed that mission in style and has become a go-to destination in itself, further complementing the city skyline with effortless charm.