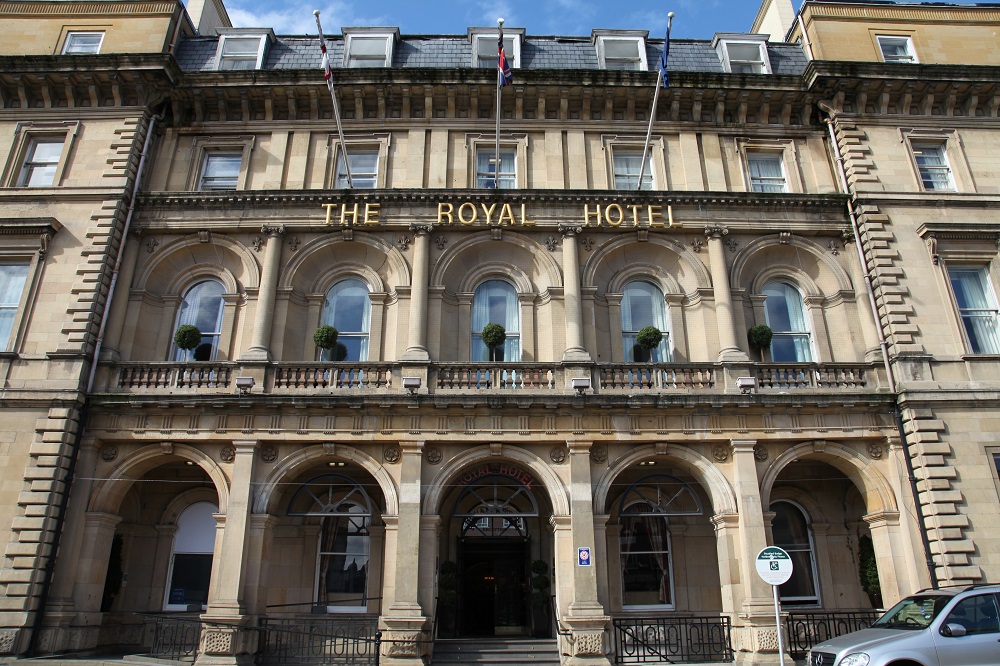 I have a fascination with railway hotels. In Britain, they were part of the revolution in travel and hotel use in the mid-nineteenth century. Before the railways, mass travel was inconceivable and hotels were coaching inns, primarily places where horses for the carriages or stagecoaches could be changed. Such travel was slow and expensive but the railways brought mass travel into reality.

In the industrial towns and cities of the north, working pattern changes and the industrial workers in the mills became part of a well paid elite, at least initially, as wages were set at levels to tempt self employed artisans and field workers from the countryside into the towns. Factories began to have shutdowns to allow the whole workforce to take a holiday; the famous Wakes Weeks in Lancashire an example, where one writer recorded that in Bolton Wakes Week the only thing that moved in Bolton were the ‘hands on the town hall clock’.

More than just holidays however, the railways transformed the transportation of goods and people. Ports like Hull became major players in a world in which by the late nineteenth century, had exports from Britain totalling more than exports from all the other industrial countries of the world put together. Writing at a time when the UK has just announced a record negative trade balance this casts a sad light on the performance of British management, political and industrial, since then. 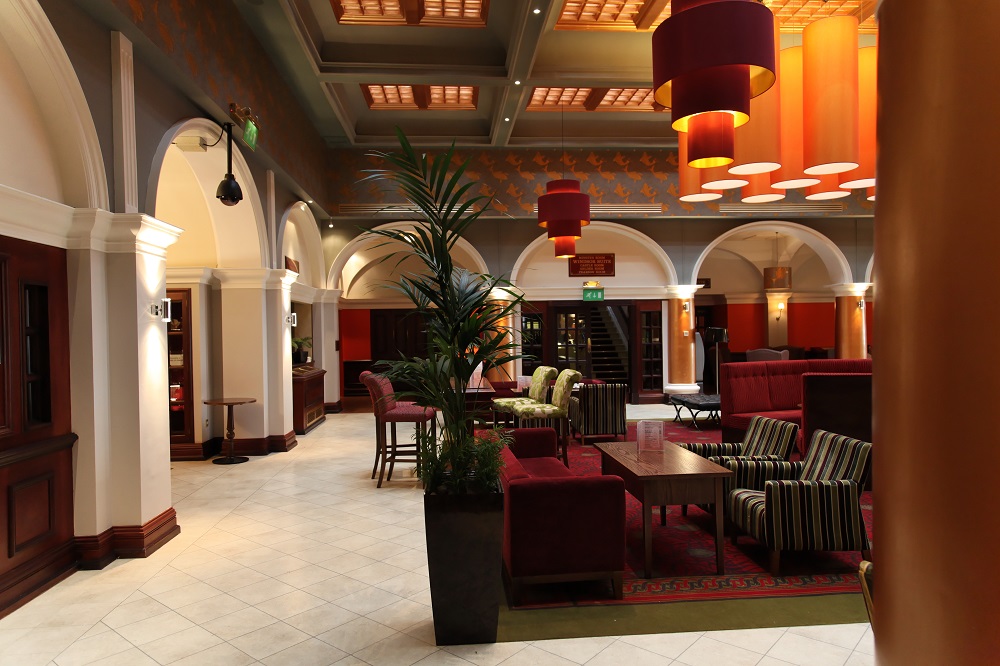 The demand from business as well as other travellers was clear to the entrepreneurs who built railways the world over which started a hotel building boom that was to last many years. The Royal in Hull is a part of a magnificent railway development, a terminal that has survived, in this the most blitzed city in the UK outside London, with many pre-war buildings destroyed or damaged. It stands comparison with later buildings we have featured (Andaz in London, Mohonk in upstate New York and the Queens in Leeds) as a testament to the imagination and willingness to invest of our Victorian forebears.

Indeed Victoria and Albert with their children stayed in this hotel in a visit to Hull in 1854 (the hotel dating from 1851). From the date of HM’s visit the Station Hotel became the Royal Station Hotel, now just the Royal Hotel.

The hotel is the subject of a continuing refurbishment programme from a new operator. Such hotels are a challenge for both operator and designers. Budgets inevitably are tight and much existing has to be refurbished whilst the whole establishment is lifted to remain competitive. For the operator it may mean retraining staff, or injecting a new esprit de corps. For the designer the key is spending the money in a targeted way to gain maximum ‘bang per buck’. 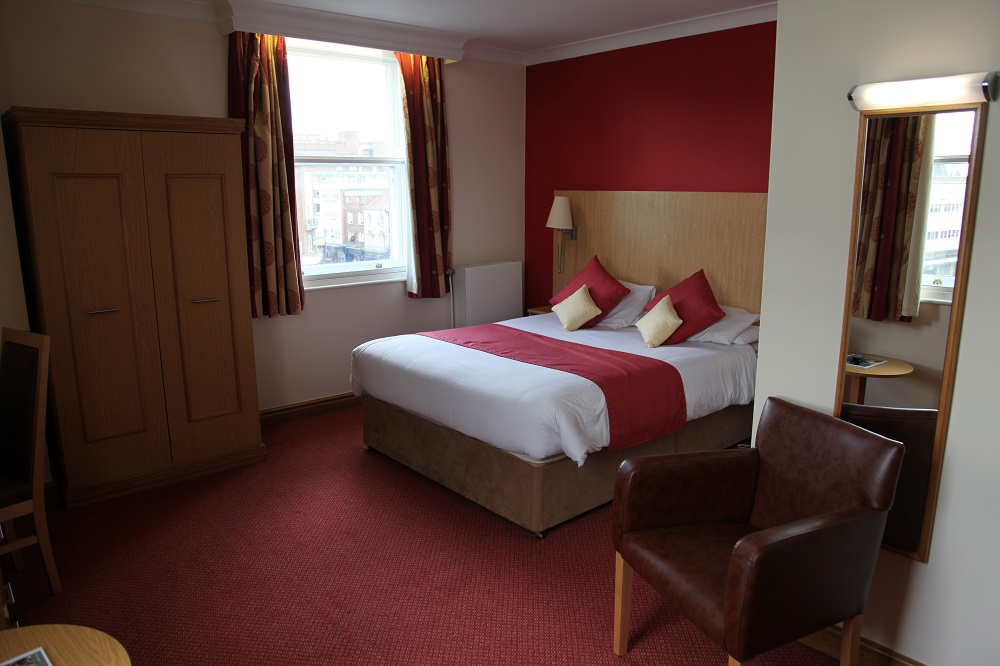 The refurbishment strikes its first confident note with a positive and stylish reworking of the reception and bar lobby. This room, which reaches right through the hotel, has been given a dramatic lighting centrepiece, a large assemblage of lights creating a focus in the centre of the room. As well as being dramatic, the fitting also reduces the vault feel by lowering the centre ceiling. It also stops the eye following the room through to the exit onto the platform through the opposite entrance on the station side of the hotel.

The addition of strong arcs of light around the bar area also draws the eye, again helping to stop what might otherwise have been a passageway effect. Further interruption is gained from the large central seating area. Strong pattern on wall and carpet are counterbalanced by simple paint treatment, but the visual key is the light fittings and the dramatic areas of light they create.

The most disappointing area is the section in front of the reception desk. Here, a small piece of the original mosaic floor is preserved but the floor generally is simple functional tiling, out of place with the mahogany and rich pattern and colour elsewhere. 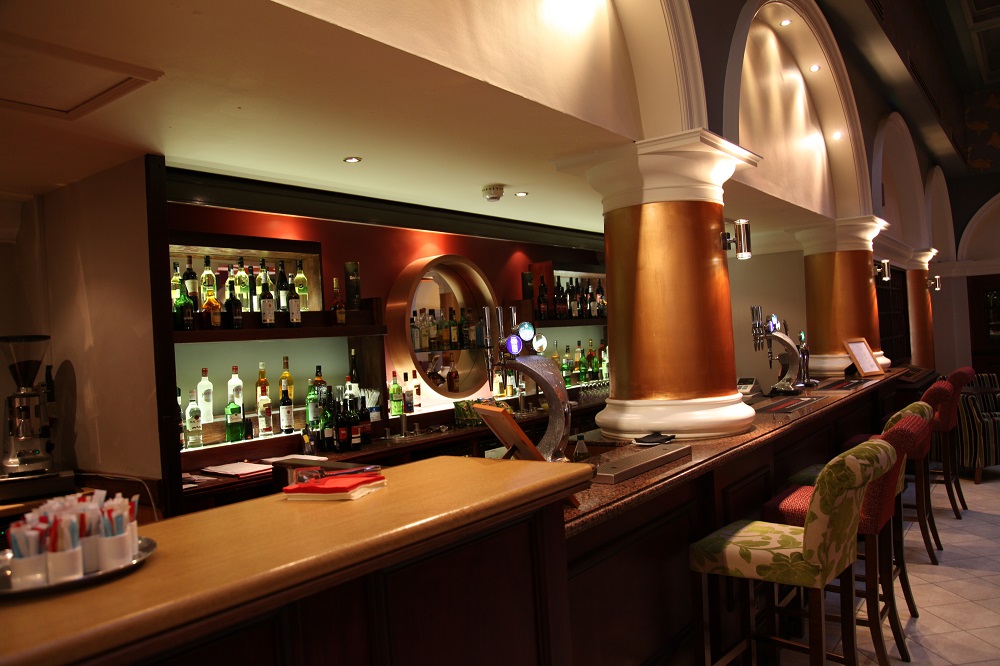 Whilst the reception desk is generously sized, its back fittings and the lift cars have been left alone and fail to match the quality of the newly refurbished area. It is as if a line was drawn at the columns inside the front doors, with instructions to the designers that nothing needed to be done beyond that point, as the immediate front area around the entrance doors seems to hark back to another era. Given the way in which smokers colonise areas outside the doors, this is perhaps a wise decision.

The whole debate about smoking in hotels, won in principal, is still a battle not over. Here, as in other hotels visited, smokers express the desire for non-smoking rooms, as they prefer the clean atmosphere, which of course they are then unable to resist polluting. In this hotel there also seems to be a mix of smoking and non-smoking rooms on same bedroom floors which just doesn’t work, as smokers leaning out of windows doesn’t remove the smell of smoke they trail around on their clothes and other belongings. Entering a hotel through a posse of smokers is a very unpleasant experience too. To be in a non-smoking room next to smoking rooms reminds me of when a Parisian restaurant seated me between two tables of smokers. When I asked for the non-smoking area, the waiter said I was sitting at it.

On this occasion in talking to the smokers, several said their preference would be for the whole hotel to be non-smoking. Certainly, it seems that when a hotel is newly refurbished it is an opportunity to revisit standards throughout and the time to impose a full smoking ban. The ground floor has a substantial function room area, including a private dining room (adjacent to the main dining room) which appears to be used primarily for storage. As the restaurant itself seems under pressure when feeding a coach party, maybe this should be brought into play to relieve it.

The function room is a well-appointed space in a side wing extension to the original buildings. These extensions have been added symmetrically, maintaining the overall grace of the original exterior, enhanced by the operator with planting at first floor. The creative confidence of the ground floor with the sharp lighting and sense of pattern is not repeated on the bedroom floors. Whilst the bedrooms themselves are competently handled, the corridors lack panache. This may be a result of a decision to focus the budget on the areas that are most guest facing, a sensible decision if the budget is tight. 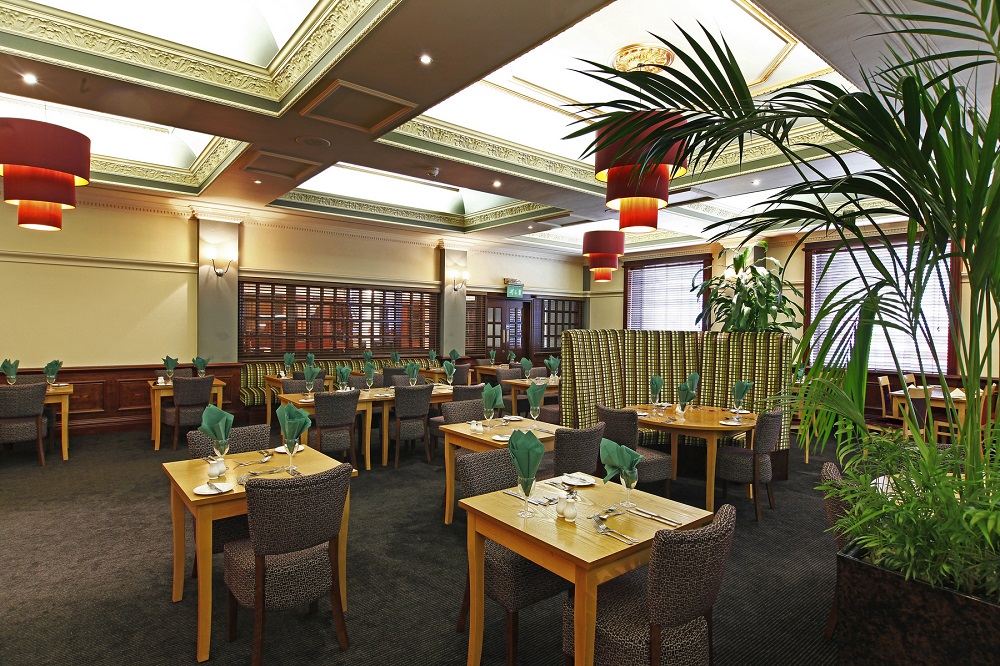 In the bedrooms, the reuse of existing furniture has been intelligent and the addition of a strong colour on one wall goes some way to recreating some of the drama achieved in the public areas.

Bedroom size varies widely and the dramatic lighting that is the strength of the public areas is missing, noticeably so in the larger rooms. The bedroom lighting is adequate but task lights are over the mirror at the desk and bedhead lights echo those of the 1980’s, despite the reading light additions. Bathrooms have been refurbished well, but again, reusing the existing layouts has not enabled the best results to be achieved, all of which is disappointing after the public areas on the ground floor.

Leaving aside service this is a hotel that is capable, with a little push, of lifting itself up into a four star bracket. It may be that the market in Hull does not support that. Although the station has been beautifully restored there is a lack of civic pride evident in the overflowing litterbins at its entrance (it’s all about attention to detail isn’t it?). The hotel building is representative of the many surviving fine buildings in Hull which is still a busy town with major manufacturing and importing businesses. There is plenty of potential here to develop an already strong tourist industry. The town is where William Wilberforce was born and lived, home to aviation pioneer Amy Johnson, and although it now admittedly has John Prescott to cope with, the Ferens Art Gallery is a gem, and the aquarium called the Deep is a brilliant addition to the busy dock area.

The refurbishment of the Royal and the railway station hints at what could be. Parts of the refurbishment justify the label ’boutique’ for an hotel that sees itself still as a three star. A little push operationally could take this to new levels where a rethink of the bedrooms could achieve a standard that would stand alongside the Queens in Leeds and London’s Andaz in the pantheon of well-restored railway hotels in the UK.

Written after a visit in June 2010. Words and images ©Patrick Goff.