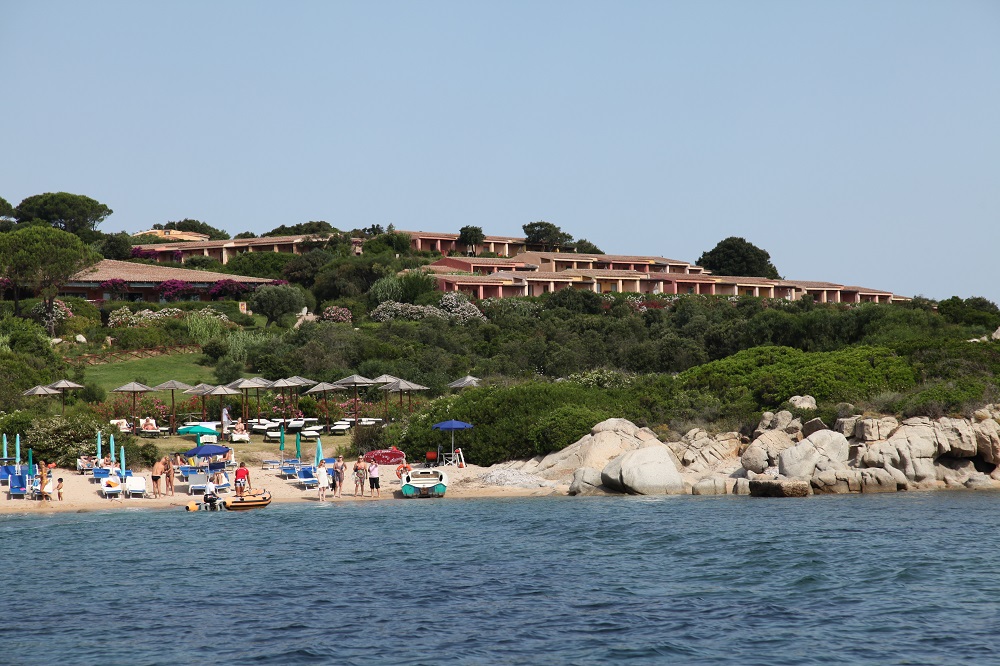 For many years my practice worked for island hotel groups, the Hugglers (see Club Hotel and Spa) and the Seymours of Jersey (see the Merton), through some very tough times for tourism on the island as it shrank from some 27,000 bedrooms to 9,000. For small islands there are many problems that affect the work of designers — limited competition between a few contractors, for example, who can carve up work between themselves and may have limited ranges of specialisation. Even supply from outside the island can put site work at the mercy of island transport links.

Transport links can also be a limiter on how guest reach hotels too. It may be there is only one airline serving the island, or a limited seat capacity restricting the ability to offer low prices or to raise tourism numbers. Jersey for example suffers from sea fogs which can restrict the ability of airlines to keep to schedules. Seat prices are high too.

Recently I was invited to look at a group of hotels on Sardinia. Interesting to see the island listed as having its own separatist movement wanting to take it back independently of Italy into being once again the Kingdom of Sardinia. Somehow for these separatist movements they are quite happy to believe that the grass is always greener on the other side of the fence. 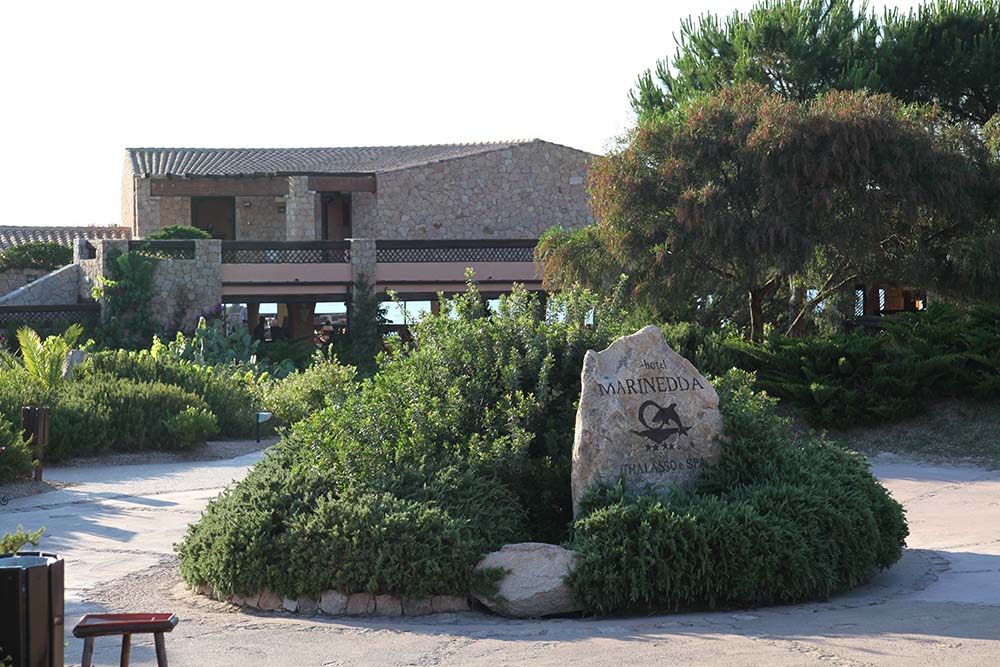 Like Seymour’s who only operate on Jersey (Hugglers also operate the Apollo in England), Delphina only operates on the island, the owners being a construction group with a great eye for locations and the ability to move quickly to exploit them once found. Northern Sardinia is partly the Costa Smeralda. The hotels currently operate seasonally. You might think this is due to the weather, closing in winter being a sensible option, but no hotelier likes losing quality staff during a closure. No this is down to the fact that the airlines only operate the routes to the local airport seasonally.

Sometimes I wonder why Islands don’t operate their own airlines or ferry services rather than leaving themselves at the mercy of offshore operators — I guess the desire for independence doesn’t run to spending their own money. Delphina operates eight four and five star hotels in the north of Sardinia, beautifully located overlooking the coastline with its secret beaches and rocky coves, on the edge of a marine reserve that is a divers delight, and almost a part of the Costa Smeralda itself.

Sardinia has a pink granite rock a little like Jersey’s but unlike Jersey it is washed by warm seas with very little tidal rise and fall, allowing the permanent beach provision of umbrellas, sunbathing platforms, bars etc, unthreatened most of the year by the sea itself. The rock creates little almost private coves along the shore each with a small sandy beach slipping into a warm emerald sea. In addition the absence of threat from the sea itself enables a relaxed style of both townscape and hotel design that can rarely be found in the UK, enhanced by glorious riots of colour from oleander and bougainvillea. 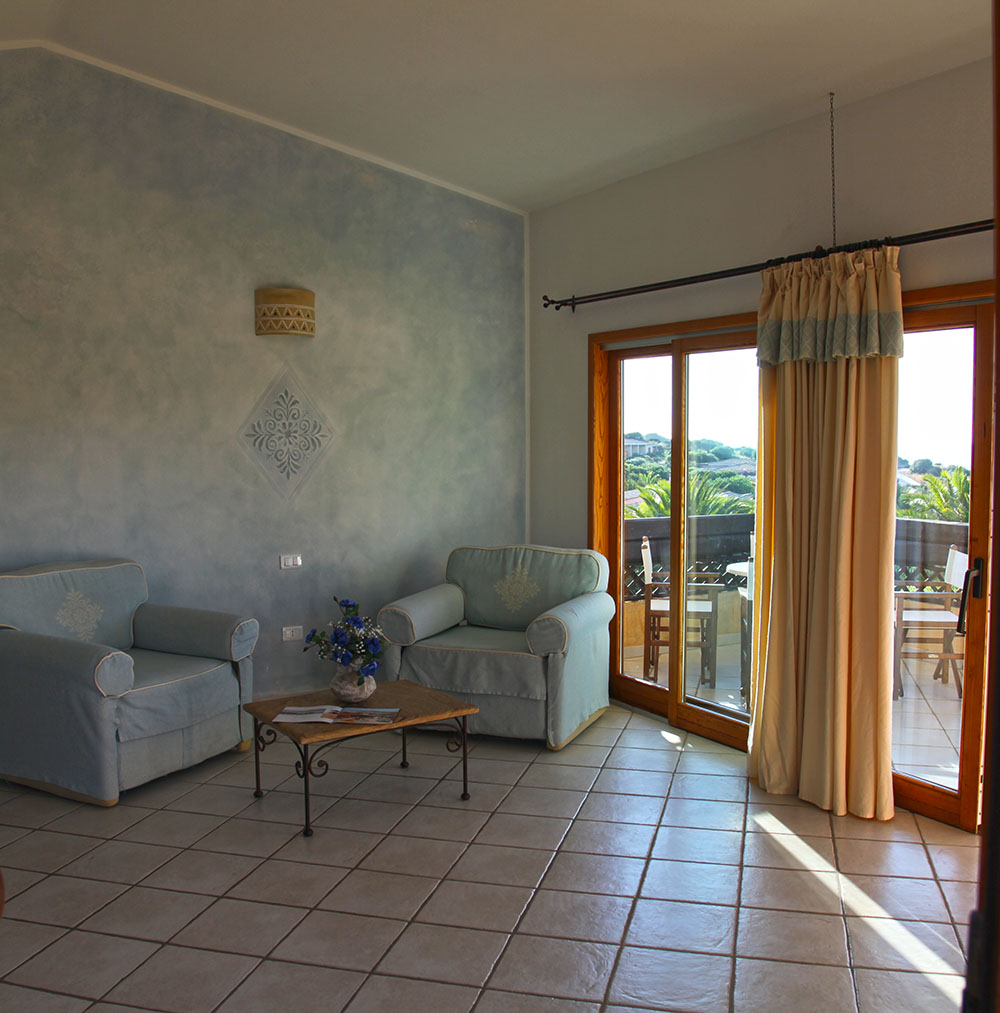 In Sardinia the towns also build right to the sea, unlike England where they hide behind the beach defences and sea walls our up to 15 metre high tides demand, even before we talk of 14 metre high Atlantic or 20 metre North Sea waves. In Sardinia current legislation prevents any building close to the shore line but many hotels and towns go to the water’s edge as they pre-date this law and enjoy the barely half a metre rise and fall rhythm of the Mediterranean. With local roots and local pride Delphina makes the most of this heritage in its hotels. It uses local produce and local cuisine in its restaurants and emphasises its link with the sea by operating seawater Thalasso Spas in 6 of the hotels.The use of local stone builds (literally) the relationship with the local landscape.

Buildings are low rise and follow the contours, the architect and planners having a good eye for how to integrate the resort with the landscape, curving around both pools and the sandy beaches the small coves provide along the property waterfront. Rooms have balconies with sea views and paths through the oleander and bougainvillea lead guest via pools with waterfalls to the beach bars and sunloungers that fringe the beaches. In keeping with the architecture the interior design follows local tradition — painted walls, tiled floors, covered balconies and windows that open to let sea breezes cool and ventilate. Even in the summer heat the rooms feel cool and the vernacular of stone, thick walls, shuttered (and well shaded) windows create rooms that even though they have air conditioning are still cool without it on. 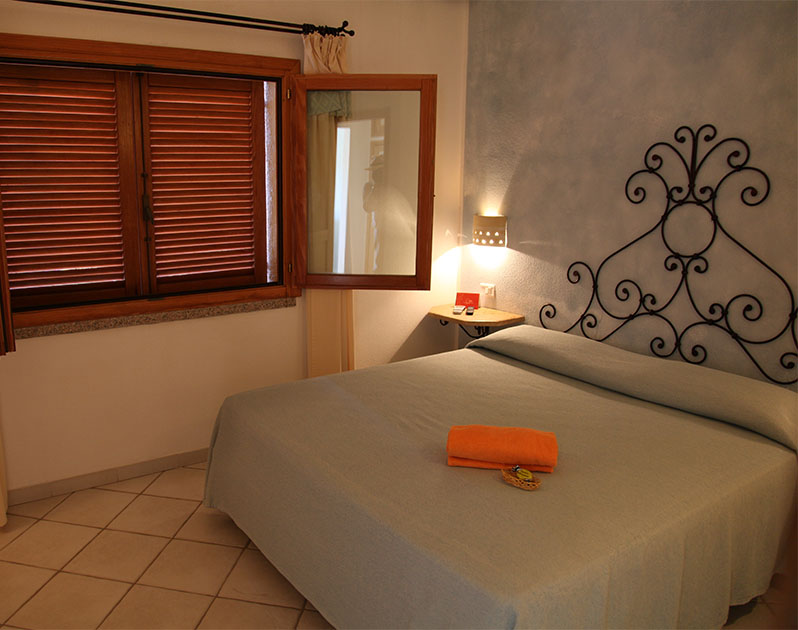 More surprising then is the fact that there is little sign of solar power being deployed given the endless days of sunlight. Washrooms are generously sized and few have baths — again driven by attitudes to water conservation and the quick shower taken after sea bathing. Baths are appropriate where soaking out the stress of a day is needed, but here holiday makers might shower two or three times a day so water conservation becomes a major consideration. For families with small children rooms with baths are available providing notice is given on booking.

This is an hotel without corridors in the conventional sense since all access is along paths that follow the contour lines, each bedroom unit being accessed via its own ‘front door’ off a ‘street’. Balconies look out to sea across gardens planted profusely with oleander and bougainvillea, the gorgeous colours enhanced by the strong Mediterranean sunlight.

In contrast the colours painted on the bedroom walls as faded blushes and blues, gently harmonising with the landscape and the fabrics. Schemes might at first glance seem bland but in a landscape of strong brilliant sunlight and shadow they are restful and calming, making rooms a retreat from the bright turquoise of the sea and the hard light of the sun. The timber used is traditional chestnut, used both for the traditional form furniture and also for the structural timbers that provide the framework for the planting that shades the walkways. 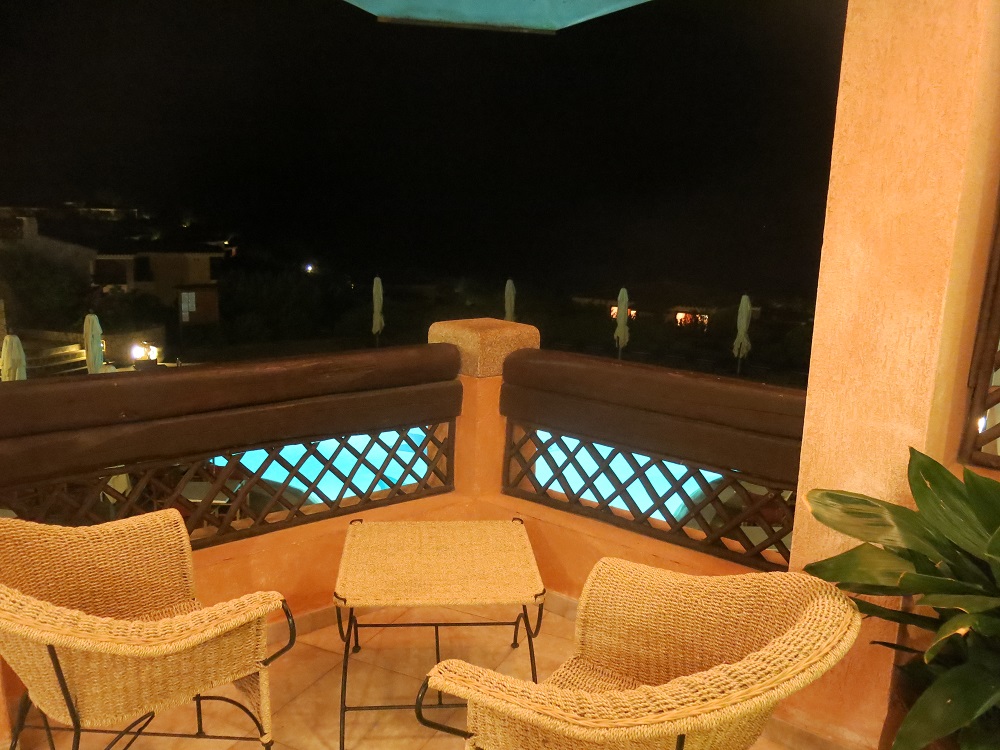 Use of local materials continues in the way in which the signage is controlled. Using outcrops of stone signage is either painted or incised into the local rock/boulders, integrating signage neatly into the landscape.

Running down from the Reception desk is the line of pools terminating on the beach. The chain of water provides a heart to the hotels, and each major point has its own restaurant and along the way the spa hides itself, with treatment rooms having delightful porthole windows that allow light in from beneath the water of the pools, filling them with a calming aquamarine dappling and restful for those having massage treatments.

Tucked away off a pathway the spa is ‘buried’ within the rock, merging into the same contour following building line adopted by the bedrooms. Even seen from the sea the development is skilfully enveloped by the landscape, and for the spa the use of treatment rooms underneath the level of the pools furthers this process of incorporation. The pools themselves are enlivened with water falls and spa areas, some linked as seawater treatment areas (Thalasso), some there for pleasure for those who prefer a pool to the beautifully warm crystal clear Mediterranean that laps tidelessly onto the beach (sigh)… 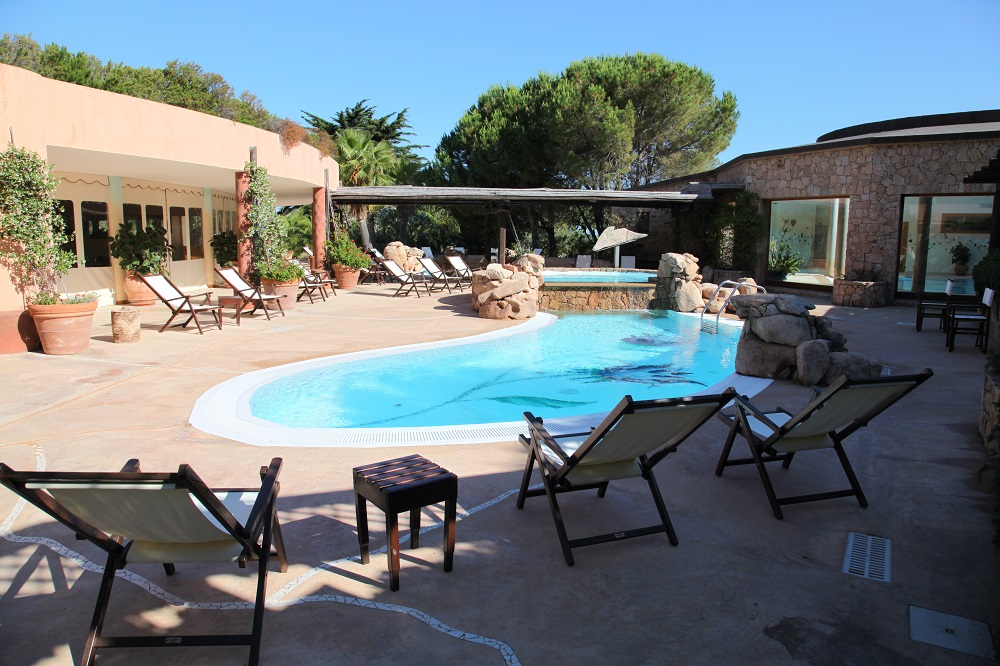 The walks meander through the gardens, sometimes passing rooms where balconies are furnished not just with loungers or tables and chairs but also with thoughtful rails for drying beach towels and costumes, where an evening beer can be – oh stop, enough! Writing this on a cool autumn evening under grey English skies this is torture…

Rooms have Wi-Fi and Sky TV, which has to compete with sunsets and birdsong and the inevitable noise of cicadas. Mr Hilton said location, location, location. Well Mr Hilton, say to that Sardinia, Sardinia, Sardinia. If you like swimming in a crystal clear sea, marine parks, sun and sand then this hotel facilitates that enjoyment. Skilfully planned, pleasantly serviced, generously sized it is well enough designed to slip gracefully into the background, not trying (as so many gauche designs do) to compete with experience of the holiday maker.

Here the memories will be of sunsets and the environment, the sea and sky, of bougainvillea. When asked the reply would be “the hotel – yeah- it was OK”. Impressing with aggressive design is not what its about here. Instead it is well designed to complement the holiday experience, not compete with it. Here the designers ego is subordinated to the hotel guest’s pleasure.

Which is exactly as it should be.

©All words and Pictures Patrick Goff 2014