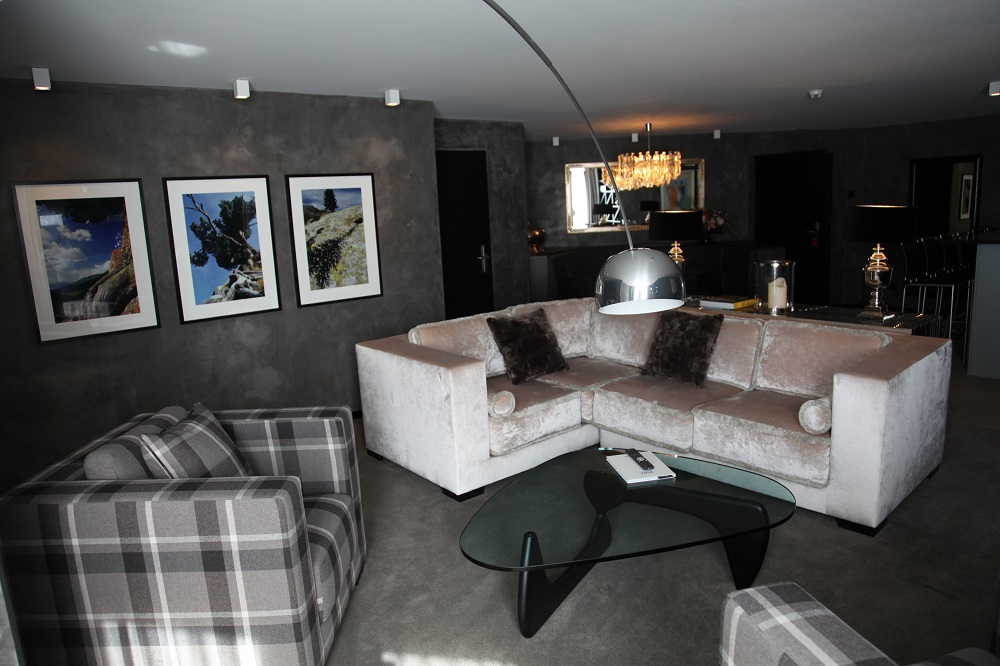 I don’t ski. I have this image of gliding out onto the slope and slowly sinking into the snow as my weight proves too heavy for the skis (heavy bones you see). So the Alps and their frequent deep snowfalls are not really my scene.

However, the Alps in the summer were something else. The week before I was in Davos they had a foot of snow, but in the unseasonably hot autumn when I drove up the mountain, it was gone. The Alps were green and the skies blue with patches of white lingering where the sun didn’t reach. The roads twisted and turned up the slopes, each bend opening another vista of beauty – grassy slopes unmarked by hedges or fences and behind grim rocky peaks reaching upwards into the crystal clear air.

Small towns and villages are linked by the roads, although new dual carriageways are being carved, drilled and constructed to bypass them. These roads attract motorcyclists and driving teams such as that led by Jeremy Clarkson (BBC TV programme, Top Gear), who like the thrill of driving around hairpin bends. The Swiss of course enjoy their famous efficient rail system which seems to manage to run whatever the weather throws onto the line.

Although Davos straggles along the valley, the Grischa is in prime position right across the road from the railway station linking it to Klosters, a short ride down the hill. Convenient though the rail head is, the hotel was chosen for Top Gear HQ because one of the attributes of the hotel is its garage parking. As much as Davos can be said to have a centre, the Grischa is it. Just along from the Town Hall, opposite the rail station and across the road from the new police station, none of these will prove its prime attraction. No, the prime attraction is its position at the bottom of the main ski lift up the mountains. 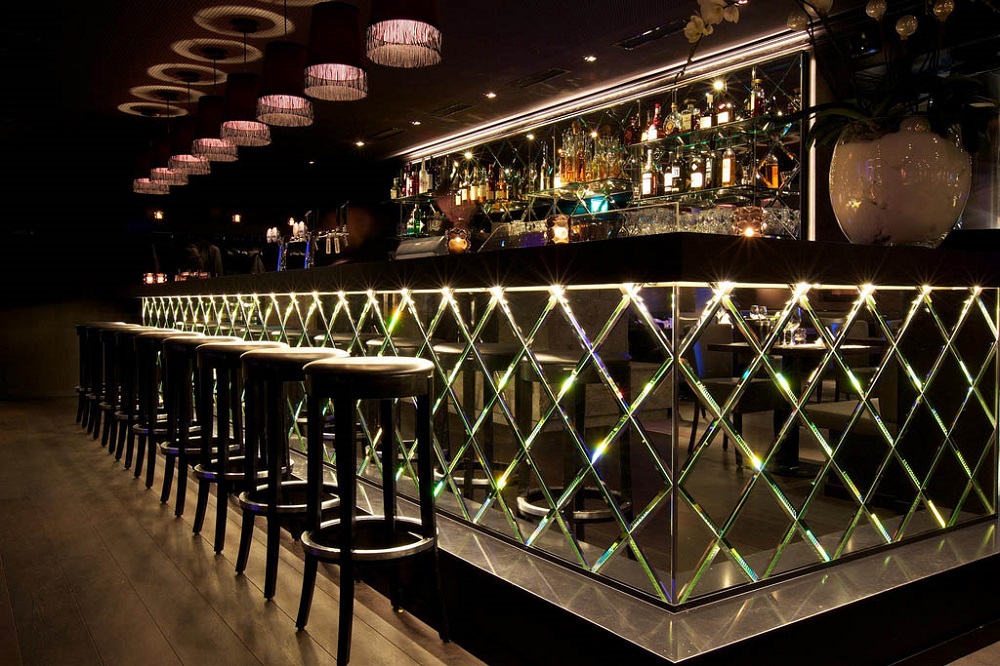 This entire area is littered with ski lifts, but the ones opposite the Grischa operate all year round. In summer they are used by walkers and paragliders who take the lifts to the top of the mountain to hurl themselves off into the void. Repeatedly. Me? I feel the same way about paragliding as skiing – put me on one and it will fold up and plummet to the ground…

Grischa is not a refurbishment. This is a major reconstruction with a new building added to increase the restaurant, bar and bedroom provision and the rebuild of the existing hotel. The building uses local materials – Swiss stone, timber and finishes generally. From the stone and timber in the reception to the polished stone panels that are so attractive in the bathrooms, this creates a harmony throughout the building, reinforced by good lighting design.

The finishes are well thought through from a practical standpoint not just aesthetically. The stone floors in the the entrance lobby work in snow whilst in the bedrooms there are not only coat hooks for outerwear but plastic mats for snow boots to be placed on, allowing thaw water to be kept away from carpets. Psychological warmth is also created with open fires in public areas with stacks of logs next to them to emphasise the visual warmth created, whilst dark corridors also reinforce the womb-warmth of the hotel interiors.

In the bedrooms the fabric walls with their striking bold patterns and small decorative gimps enhance the feeling that the bedroom embraces the guest. Rooms are large with a high proportion of one and two bedroom suites. This is a luxury hotel aware of the two or three weeks guaranteed occupancy as the world’s great and good (maybe terms that need revision in view of the number of bankers involved) come to the annual Davos Economic Forum. Meeting the standards demanded by the politicos and others may be a driver, but Switzerland also hosts some of the world’s wealthiest skiers (the British Royals use Klosters just down the valley) so standards are appropriately high.

The 55 rooms and 38 suites vary from generously sized single rooms through to the 1300 sq foot ‘presidential suite’. Whilst fabric walls feature in some rooms others have a digitally produced timber wallpaper and in the larger suites the open fires of the reception lobby are reiterated. Swiss production is expensive as the currency is considered a ‘safe haven’ from the Euro and other currencies (I’m told Friday evenings banks stay open late as the Italians etc. come over the borders to deposit their weeks takings into Swiss francs rather than keep them in riskier Euros). The Swiss will buy Swiss rather than go for a cheaper option (like the British), so toiletries and casegoods alike are manufactured in Switzerland with the traditional solid Swiss quality. It is not just the stone that has been chosen because it is Swiss.

Open fires and clever lighting – almost under lighting – are reinforced by fur throws and fur cushions on the beds. Gold liners are used on the lampshades to ensure a warm light is thrown too, adding to the perceived warmth in the room. Curtains are heavy and blackout lined but the windows, despite the air conditioning, open and many rooms have balconies too.

Bathrooms generally have both a shower and a bathtub. Again they are quite dark. White ceramic is used for the sanitary ware but the stone is a local granite, very attractive in its finish. The smooth slabs are used in large pieces and there is underfloor heating to continue the sybaritic feel. There are heated towel rails too and the high quality soaps and unguents are all Swiss made (and expensive, the manager added!)… 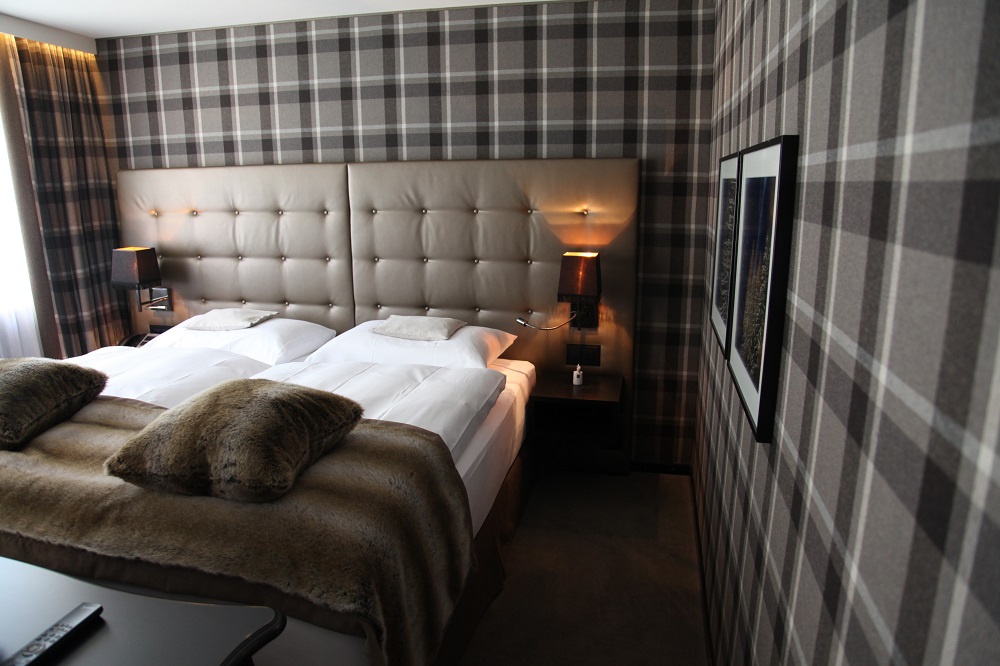 Despite its central location the hotel is quiet and the restaurants and bars are all on the front of the hotel with terraces that face the mountains across the road and rail lines. Here are the places to see and be seen. I would say places for Friday night millionaires, which they would be if this was Lancashire, but here in fashionable Davos, it is more likely to be MondayTuesdayWednesdayThursdayFridaySaturdaySunday-night millionaires…

Among the hotel restaurants is a quality Chinese restaurant, beautifully designed in black with gold lanterns; a bistro; bars as well as the main
restaurant. Again the use of sophisticated, slight under-lighting allied to candle light creates atmosphere and superb dining environments. The sophistication of the design ensures there is a harmony of design throughout the hotel so the restaurants are not a sudden change in ambience, but a reiteration of the results achieved elsewhere in guest areas.

Switzerland is a country made up of cantons with three languages spoken widely (German, Italian and French) and where decisions made by politicians only become law if voted in by a majority in a referendum. This has apparently led to the rejection of a statutory Disabilities Discrimination Act. It is up to the hotel to decide on its DDA policy, but the designers have made sure that all of the Grischa is accessible and there is DDA provision in the bedroom and bathroom provision. 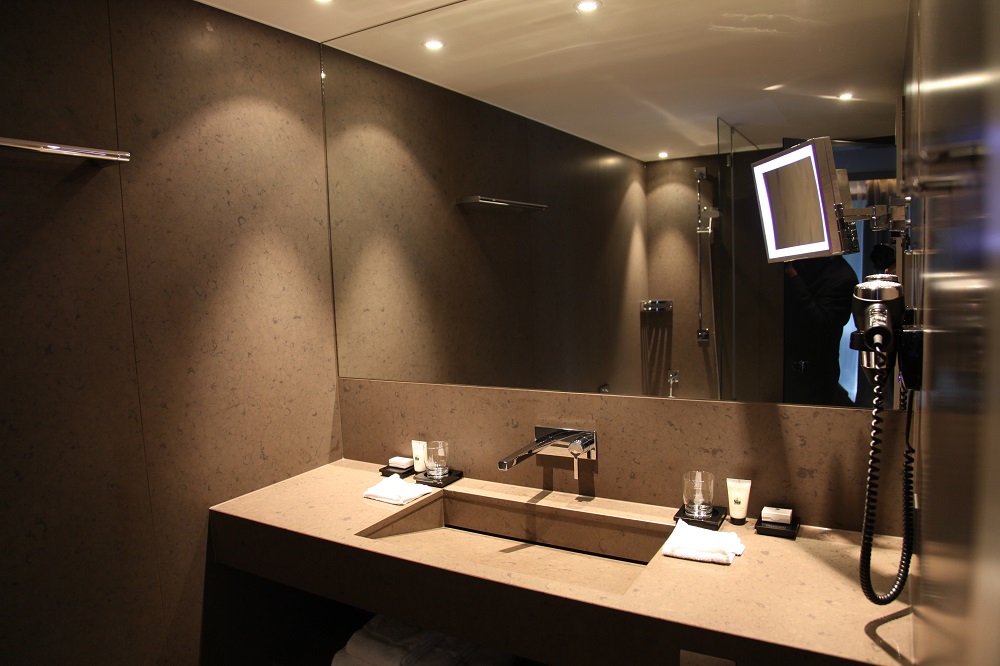 Grischa is a beautifully designed hotel. Finishes such as the stone and timber in both the public and guest areas could have created a harshness in the interiors, but which actually creates a harmonious and comfortable atmosphere. There are strong similarities in quality, signage and finishes between the Hotel Gricha and InterContinental’s Berchtesgaden property. Much as that property succeeded in creating for me a sense of excitement at the quality of the design, so Grischa achieves the same. This a beautifully tailored hotel that, although unfinished at my visit, promises to become one of the top hotels in my list of places to go back to. After over ten years of writing about hotels, and before that 25 years designing them, it takes a lot to impress my somewhat jaded palette. Grischa (and Davos too) has achieved that.

I can see why our political economic masters like to meet bankers and industsrialists annually in Davos with hotels such as the quality of Grischa to stay in, the beauty of the surounding landscape and skiing whilst they are here too. The only thing the hotel lacks is a guillotine for chopping off their bonuses.