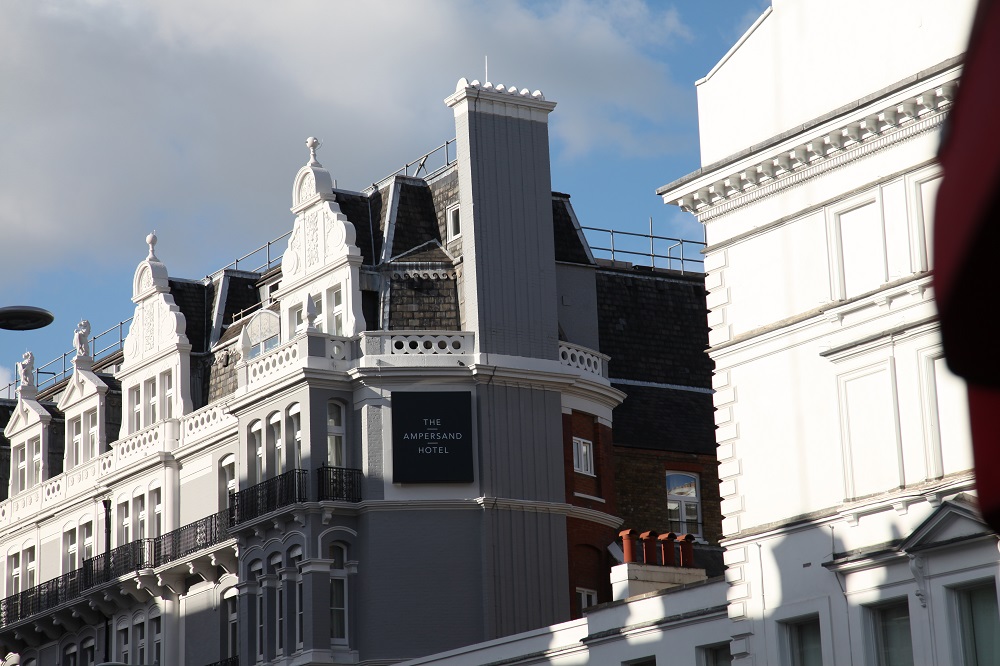 A few years ago I was in Washington to Review a couple of hotels. Staying in a Staybridge Suites I was collared by the manager for advice on how to give some personality to the building. Frustrated by a build system where the hotel was built from plans onto a plot similar to previous buildings, no designer involved just the developer, they were concerned at how the interiors lacked style. In the US where brands are 80% of the market and generally land is available, cloning previous designs is straightforward – but each time a clone is created it becomes less individual, drifts further away from the original vision, which becomes diluted. In the UK, as Ampersand shows, the situation is quite different.

Over here new builds are the exception rather than the rule and the skill of the hotel interior designer is a sine qua non in developing hotels that work in buildings that may be hundreds of years old. Here the brands represent a minority of the operators. Individual owner/operators drive the market competitively, creating hotels that become benchmarks in styling, forcing brands to compete.

This is especially true in the boutique market, where Starwood spawns ‘W’ out of Westin, Accor gives birth to the M Gallery and IHG tries to create its own boutique brands through Indigo to take a share of the market for more individual hotel experiences.It may be argued that the brand giants are, in themselves, inimical to innovative design. Corporate decision making can be defensive whilst owners of hotels such as Ampersand or My Hotel, Magdalen Chapter or Cliff House Hotel are driven to compete with design as they otherwise lack the marketing muscle of a Hilton or other large brand. 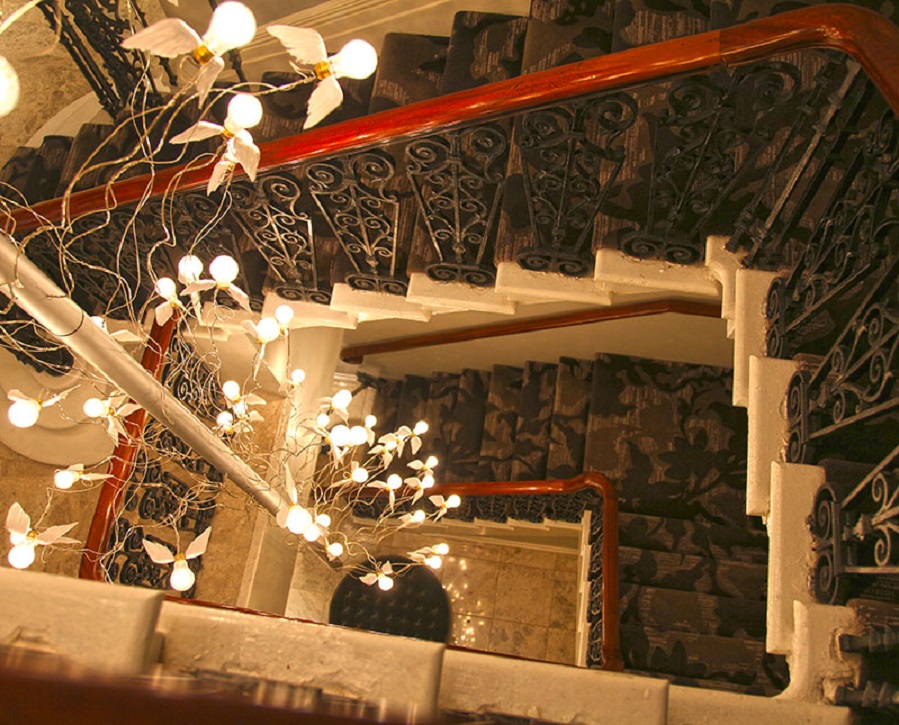 With over 80% of bookings now being made via the web this may be changing, but certainly creating an attractive hotel in an old building such as the Victorian structure that houses Ampersand poses particular problems for architects and designers, whilst filling them remains a problem for the owners.

Mr Hilton argues the key to success was ‘location, location, location’ and for Ampersand its position within view of London’s national museums in South Kensington is key to unlocking this particular door. The spires of the Natural History Museum are clearly visible from the hotel and the V&A, Science Museum and other attractions in the aptly named Museum Road are a gentle five minute stroll away.

Next door to the heavily oversubscribed French lycée it is not surprising that the hotel also makes every effort to capture lunchtime trade and afternoon teas with well designed and carefully defined food offerings too. If the brief for each area was clear then the styling created by the designers has made the definition the owner desired. However to this observer it leads to some disconnect between styles in different part of the hotel, although that may just be my taste kicking in. Certainly the design works in each area, and if the intention was to create a slight shock of surprise on moving from space to space then the designers have achieved their aim. The contrast between the cool international sophistication of the lobby and the very English decorative quality of the lounge is marked. 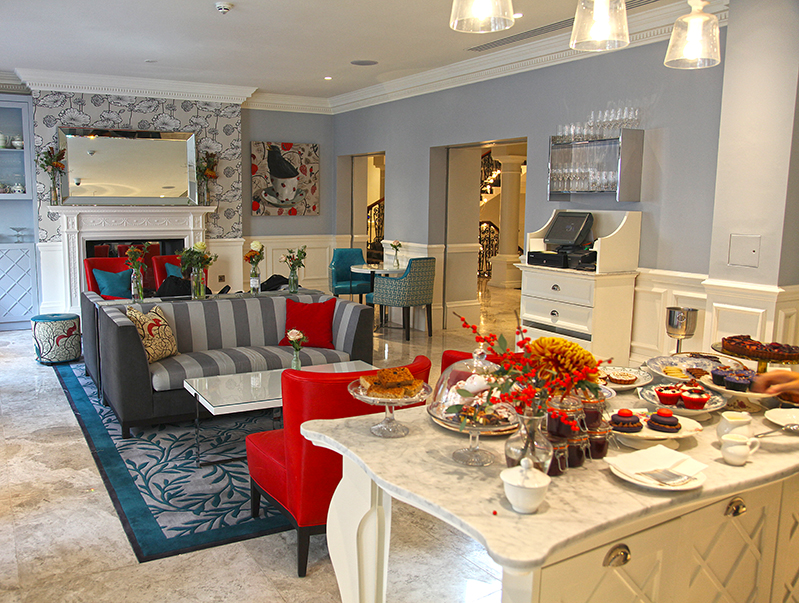 The decorative wallpapers are echoed in the paintings although the result might have a more ironic twist if the paintings had just been of wallpaper, without the surrealist pastiche of glasses full of giraffe. The result is visually busy, and fits with the array of cakes available , their icing decorations matching the decorative treatments of the walls and carpets. The surreal bent is continued through a birdcage (echoing Magritte) perched on a waiter station, all slightly at odds with the Peter Philips influenced bird painting that is a glorious feature of reception. Whilst I may balk slightly at the art it is well chosen and the imagery works as a tongue in cheek supplement to the decor. So often the art in an hotel fails to add to the interiors, but here, as in the ‘M’ Gallery with which the tea room seems to share a common aesthetic, the art adds to the overall decorative effect.

The space at the foot of the stairs is utilised for public internet access computers, with a stylish seating area in the centre and an endstop of a large 3D mural maintaining a visually interesting area as a set piece. As well as acting as the lift lobby and internet space the area also leads into the bar restaurant, which itself has a separate entrance from the street. The decoration is carried through the staircase with a similar chandelier concept to that we showed in our review of the Kempinski Dukes Palace in Bruges. Here the lamps appear to fly off the central pillar like frightened birds, or bugs of some kind. It is a visually delightful device that successfully links the floors. Fire doors are not apparent but secure the bedroom corridors off this space, whilst at the lower ground floor the staircase leads into the further public areas of the restaurant, private dining and meeting rooms.

Bar and restaurant are successful in capturing bistro atmosphere as well as styling and the separate street entrance is enabling that difficult trick that fails to be achieve by most hotel restaurants, that of attracting a clientele in addition to the hotel guest. However with over a hundred bedrooms the space is too small to cater for all guests, but as it is in the heart of an area well served by restaurants that is not a problem and the tea room above is used to cope with the breakfast rush. 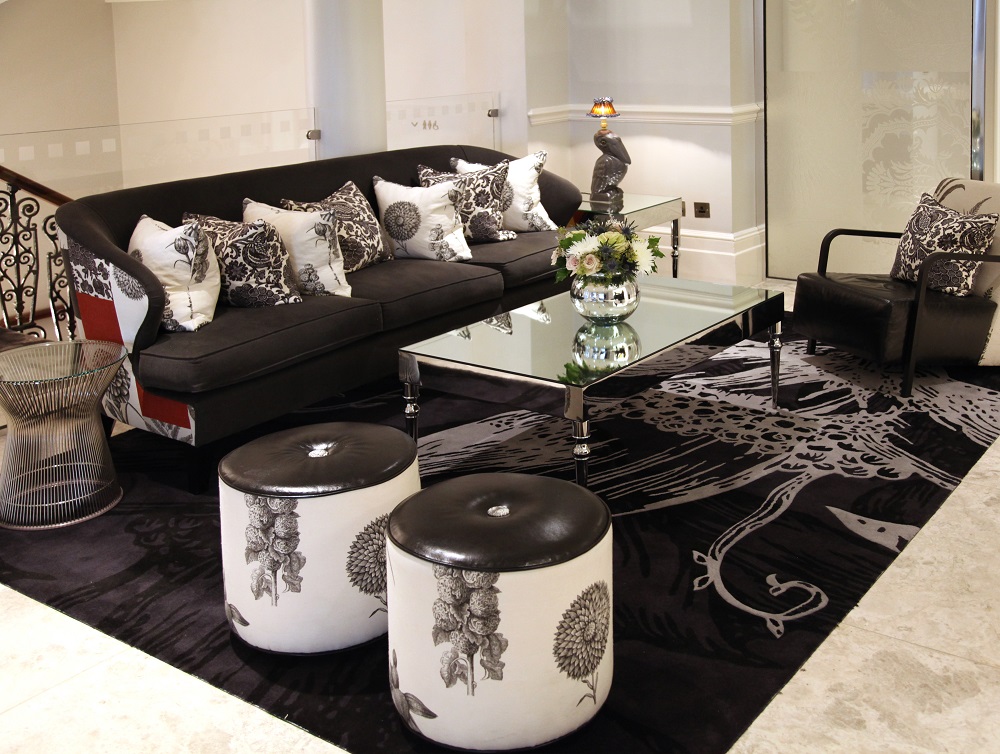 Styling here again contrasts with the lobby and tea room, the white painted exposed brick creating a Parisian feel. Large upholstered bar stool caters to the ‘Friday night millionaires’, just as likely in South Ken to be the genuine article of course. Tables are well spaced and the cellar (which this no doubt originally was) lends itself to small private dining areas, and the sense of privacy is enhanced by the brick vaulting. The areas of the cellars are split, each receiving its own unique design treatment. The timber lined private dining area or boardroom is finished in floor to ceiling joinery, including refrigerated wine cabinets and glasses showcase. The joinery is of a high standard and as throughout the hotel the quality of the detailing speaks volumes for a design and build team that has really known what it is doing. This is one of the most beautifully finished interiors I have seen in a long time.

Beyond the ‘boardroom’ is a library and beyond that a larger space set up as a meeting area.The beautifully detailed joinery is painted, with the colour being picked up in the carpet. The carpet also mimics the colouring of the timber edge to the flooring , itself a device the designer has used to link these dissimilar areas successfully. All the spaces are bright and well lit not just with inventive lighting installation but with the benefit of plenty of natural light from the front despite them being basement areas.

The overall result is harmonious and despite my reservations about the variation of design between the different areas, the result overall hangs together well, with the differentiation providing a series of enjoyable and different interiors as the guest moves through the hotel. Whilst the design of the public areas manages to create the feel of modern contemporary open spaces, it is in the corridors that the Victorian hotel origins of the building become most apparent. However the design treatment of them carries the same felicitous touches as the public areas. 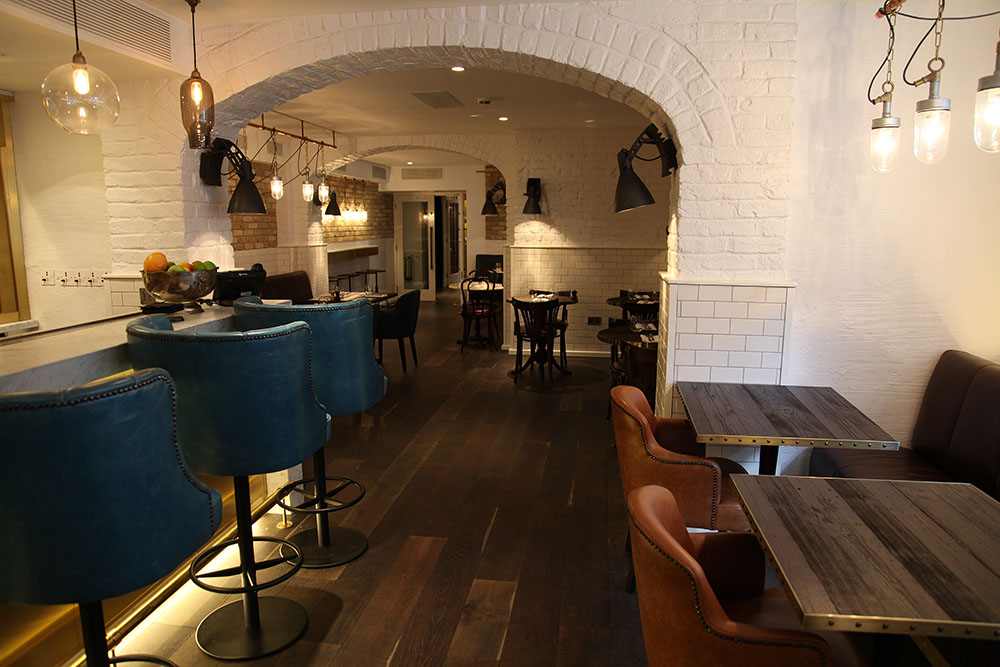 Pattern and images are used powerfully with subtlety throughout the interiors, from the etched glass screens in the entrance lobby, the ‘birds’ of the chandelier to the digitally imaged pigeons on the wallpapers. Colour, carried through from the basement, is used to break up the corridor visually preventing the tunnel effect that is so apparent in many hotels. Lighting is almost traditional in the corridors but the large motifs, taking advantage of modern printing techniques, are also used with some subtlety to create interest. In using similar motifs to the bedrooms the designers have carried a design unity through the bedrooms from the corridors.

Corridors are carpeted and retain the skirtings and dado of the original styling. Carpet pattern again harmonises with the wallpaper design, simplicity and sophistication going together. With the end of minimalism I worried that many designers would shout with colour, but here the designer shows a cool sophisticated handling of colour and pattern that marks them out from the herd, whilst at the same time there is a sense of place, almost a sense of drama, about the treatment of the interiors. 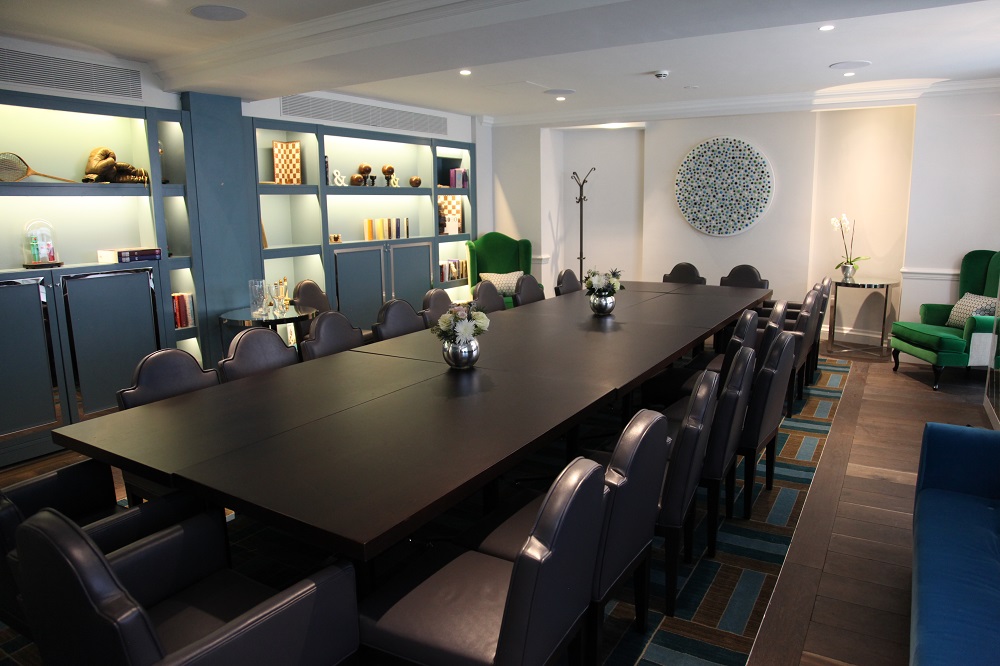 The sense of drama continues through the bedrooms and bathrooms, along with an indulgent comfort. The usual use of high quality linens contributes but it is the thoughtfulness of the design, the attention to detail that stand out here. Small details like the buttoning on the upholsteries have been thought through as a part of the scheme with button colours picking up colours in the cushion fabrics. It may seem a small insignificant detail but it is one that contributes to the overall feeling of quality that has been created. Similarly the placing of sockets above the bedside table enables phone or tablets to be plugged in by the bedhead for use whilst in bed.

Similarly in the bathrooms small details add to the overall effect of luxury, and in the suites the addition of the water proof televisions enhances the sybaritic bath experience. We all know the devil is always in the detail but here the interior designers is a shining example to others in the profession of how things should be done.

In Ampersand London gains another excellent new hotel, continuing openings which, like that of the Arch continues the London tradition of bespoke boutiques that are stylish, well designed and offer a very attractive alternative to the brands. With good food and good service complimenting good design this will become a stalwart (and no doubt profitable) part of the London scene.

©Words and Pictures Patrick Goff. From a stay in November 2012