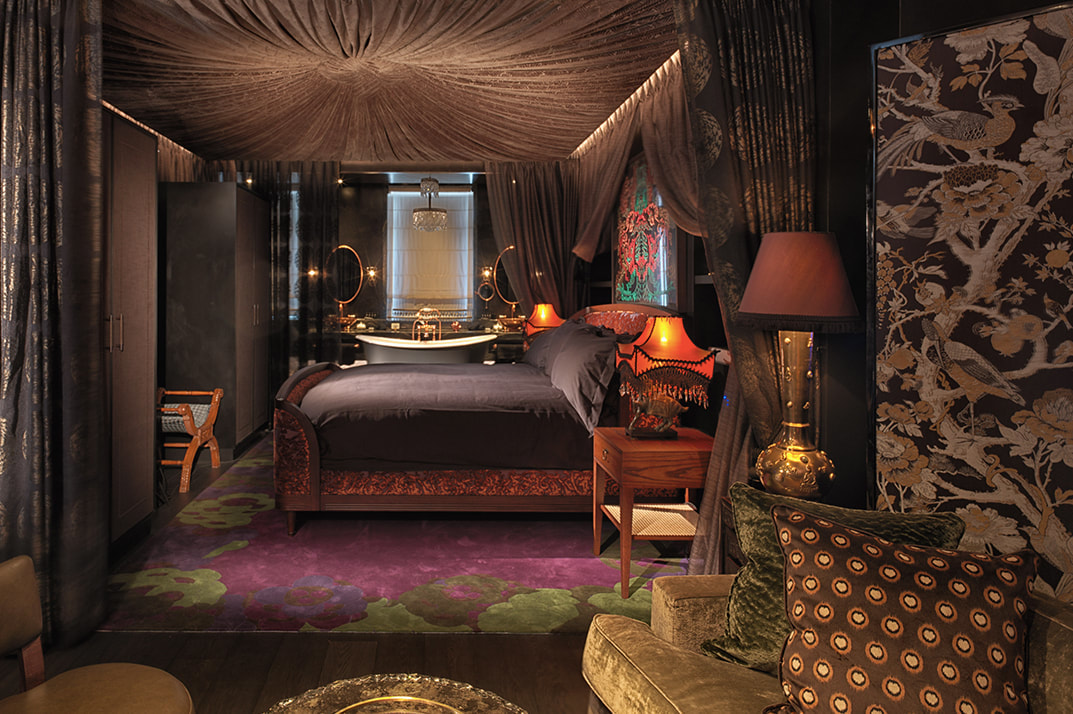 Nestled under a canopy of plants in London’s Fitzrovia district sits The Mandrake Hotel, an unlikely yet very welcome neighbour to this part of town. Hamish Kilburn takes a peek inside…

Blink and you will miss it. The unassuming framed ornate wrought iron gates are the first of many indications that rules have been broken when designing the concept of The Mandrake Hotel. Unlike other luxury hotels in the area, such as Charlotte Street Hotel and The London Edition, The Mandrake’s entrance is very low key – almost as if its exact whereabouts is on a need-to-know basis, which of course it is.

Five years in the making, and a first for the Fustok family, The Mandrake Hotel sits in a former Victorian office block and has been artfully converted into the cool, urban boutique hotel that it is today.

During fashion week last year, when The Mandrake opened, its unique Bohemian-Gothic style led to it becoming the venue of choice for British Vogue’s editor Edward Enninful and a stream of A-listers who followed. The most recent neighbour to move in and name the hotel its premium local hangout spot is Facebook’s new swanky London headquarters in Rathbone Square.

One thing that is immediately apparent when entering the building is that the design elements of the hotel feel very personal. Interior designer Tala Fustok’s creativity literally runs through the walls of the hotel. “It was important to keep the honest feel of the building, and preserve its identity,” explains Fustok in a recent press release. An example of this can be found in the public areas that have been carefully curated with surrealist sculptures to portray the feeling that nothing in this hotel is what it first seems. 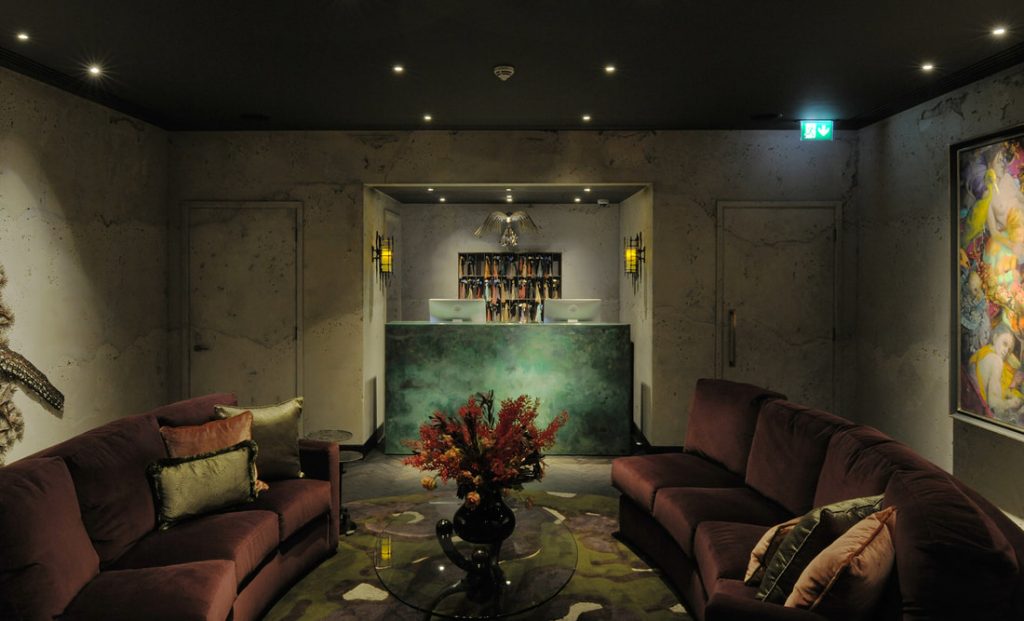 Striking pieces of art depicted by nature make a lasting impression when entering the strangely calming lobby. Industrial-style walls marry nicely with the understated yet stylish reception desk. The lobby hangs under a large gothic-style chandelier, lit by 30 wax candles, and the soft ambient lighting is well balanced to welcome guests into a curious new world.

The theme of outdoor indoor space has been well examined throughout the building, with natural light and the hotel’s incredible terrace being seen from almost all corners of the public area. A modest courtyard is poised and readily equipped for all occasions and looks up to the terrace, above which is a large living wall of plantation. 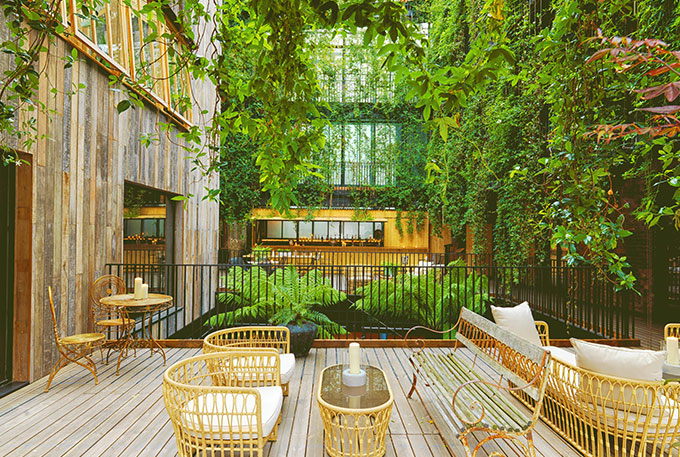 The dramatic Labradorite bar, at some 30ft in length, is the hotel’s source of energy. The dark Victorian panelled mahogany long bar is balanced by the room’s inspiration of nature. This area is rich in greens, with a gentle riot of Parisian fabrics and thick verdant palm textures of green, purple and red. Above the bar hangs the specially commissioned mythical-gazelcock (part-impala, park peacock) by Enrique Gomez de Molina, adding the mixture of eclecticism and humour.

Considering the hype, only 34 guestrooms, three suites and one incredible penthouse are sheltered on three levels, each designed to unlock a chic, unique, cosy, quiet, high-ceilinged refuge, worlds away from the hustle and bustle of London life below.

All guestrooms are carved around the palm tree-studded interior courtyard, which centres the hotel and provides rooms with ample natural light. Designed with a mixture of maximalist bohemian throughout, the rooms create “a glamorous constructed garden of Eden” as Fustok puts it.

There is a sense of harmony as if two cities are colliding in the room’s interior fittings. Indulgent Parisian jewel-toned velvets, gilding mirrors and commanding metallic coffee tables add a flare of glitz in the interiors. This is balanced with a cool London city vibe of earthy-toned drape curtains, an curvaceous wing chairs. 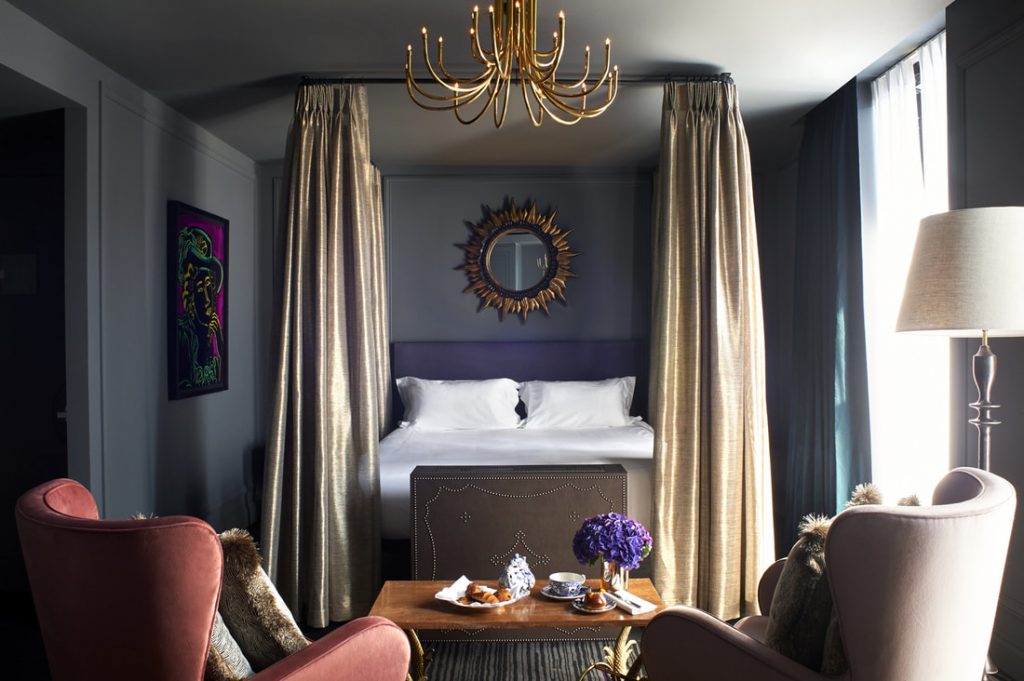 “I wanted to keep the feel of the building’s natural, raw energy,” explains Fustok when describing the well-proportioned rooms and high ceilings of the Victorian shell. Clean lines have replaced the unusual period mouldings, resulting in bedrooms that envelop you in their infinity of moody hues. Striking vintage one-off pieces compliment the dark paint tones, while accents of colour are added by interesting artwork. Together, 33 different chandeliers and vintage panel screens covered with lush botanical plants in the guestrooms echo the bohemian vibes weaved around the hotel.

The pièce de résistance is The Mandrake Suite, painted in dark sultry tones that echo through from the bar and seductive hallways. The luxurious bed is swathed in Bedouin-style folds of fabric. A standalone bathtub set on a slab of black-veined marble adding to the majestic look and feel of the suite.

As I descend down the lift towards check-out, the courtyard emerges and the sense of coming back down to earth feels very real. My conclusion is that, among the hundreds of hotels to open in London, The Mandrake stands as a shining example of how taking risks and following the heart when injecting a hotel’s personality pays off. Bravo Tala, the rest of Fustok family and all others who were involved in creating what we hope to be the first of many truly transformational boutique luxury hotels.

Fitzrovia’s ever-evolving trendy hotspot is rumoured to soon welcome a new Bluebird cafe as well as one of London’s premium HIIT and spin studios, Digme Fitness, which will open directly opposite the new Facebook offices in Rathbone Square. With these major openings, I get the feeling that The Mandrake’s quirky shell could soon well become ‘the local’ for many premium businesses nearby.