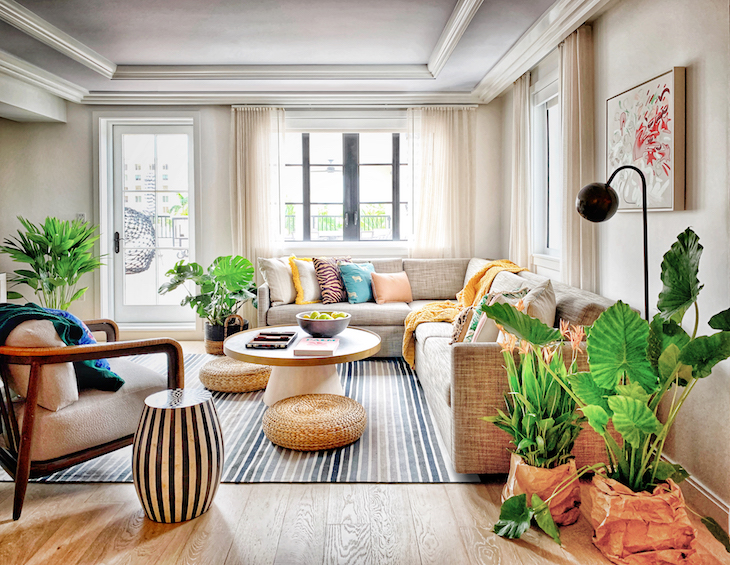 From one holiday destination to another, Nantucket’s White Elephant resort will welcome a sister boutique property in Palm Beach, which will open on November 4, 2020…

The 32-key White Elephant Palm Beach is housed in the former Bradley Park Hotel – originally constructed in 1924 as one of the first resorts on Palm Beach’s Main Street. During its century-long history, it was initially owned by Colonel Edward R. Bradley, who ran a private and celebrated Beach Club casino on land that is today Bradley Park. For more than 20 years, the hotel served as a magnet for business tycoons and high rollers who frequented the salon. Over the decades that followed, the hotel remained a mainstay for seasonal visitors. In 1980, in part to its architectural significance, the hotel was listed with the Landmark Preservation Commission. 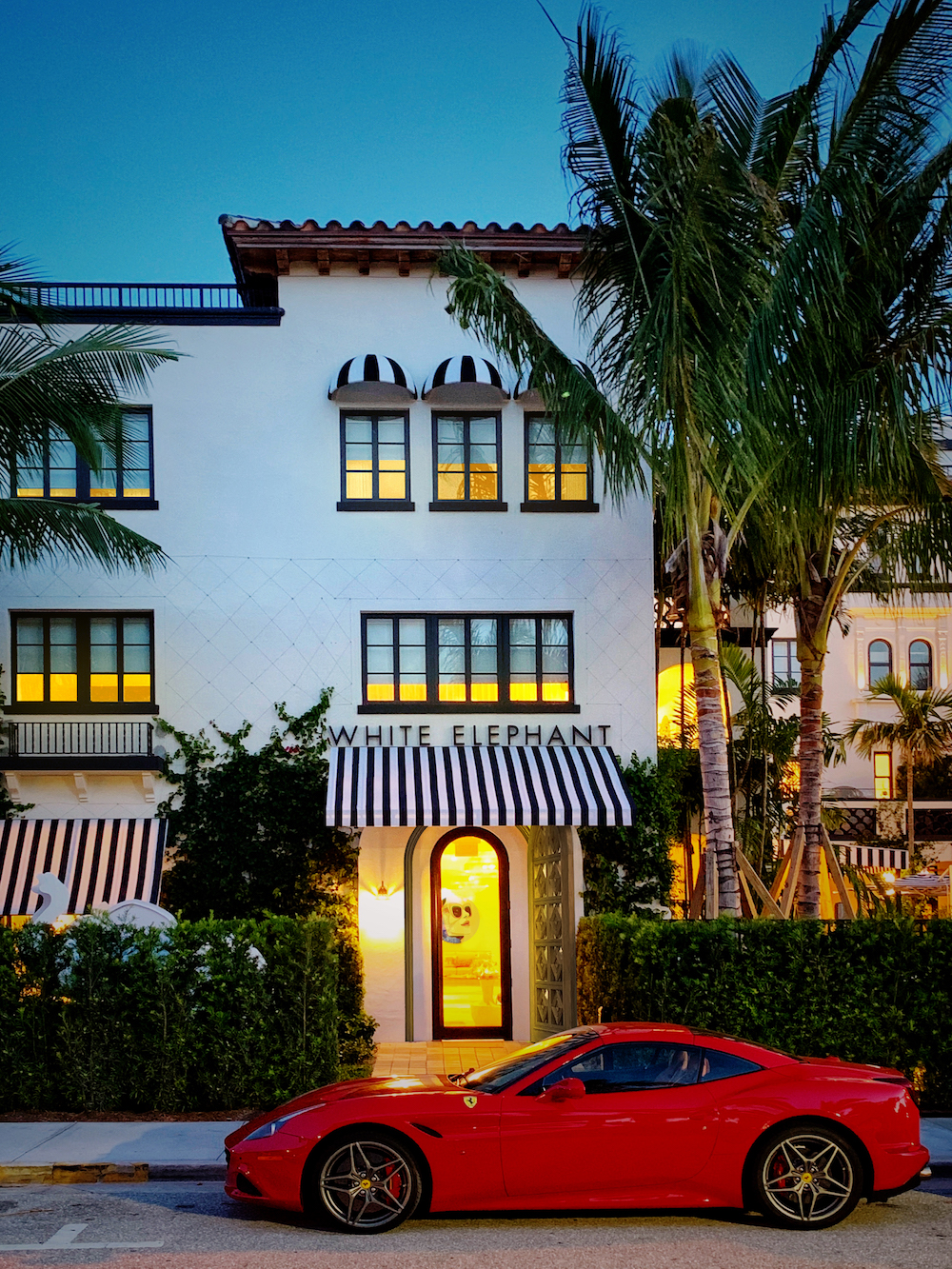 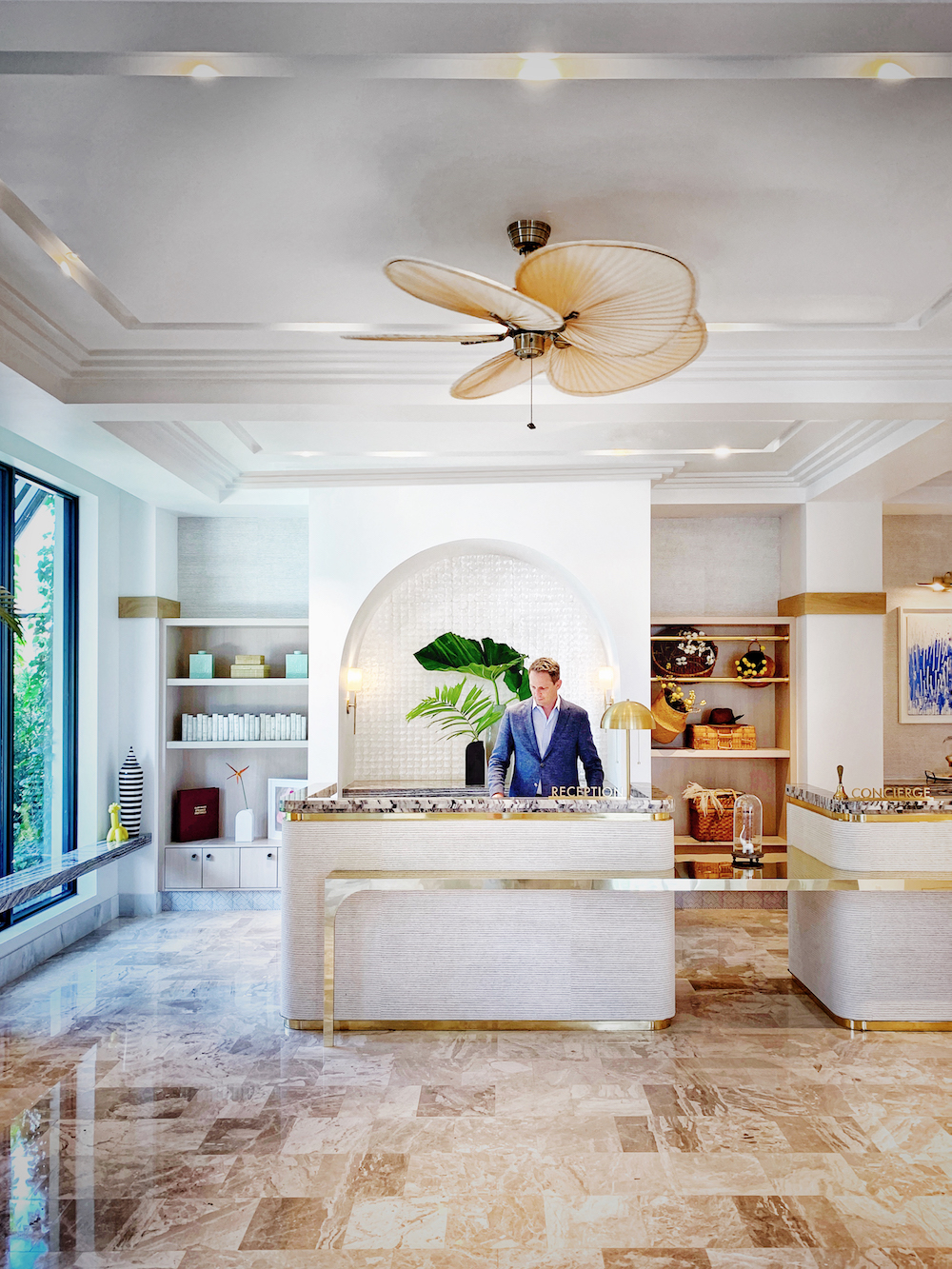 Image caption: The lobby is organized into three bays—reception, parlor, and library—each anchored by an arch at the center. The reception desk and retail are seen here; the concierge desk is to the right. | Image credit: Chi-Thien Nguyen/Elkus Manfredi Architects

The footprint of the structure and the facade remains, while the interiors have been stripped to the bones and rebuilt by Boston-based Elkus Manfredi Architects. The nationally recognised firm, known for its projects with The Peninsula Chicago and Four Seasons Residences, Boston, worked closely with the Town of Palm Beach to create a new hotel that showcases the history of the existing building while incorporating a contemporary interpretation of Mediterranean-revival architecture. White Elephant Palm Beach will maintain the welcoming feel of a private residence with 13 rooms and 19 suites spread across four stories.

The hotel stands one street north of Royal Poinciana Way, Palm Beach’s original Main Street, less than two blocks from the Atlantic Ocean and one block from the Intracoastal Waterway.

The layout of the property takes advantage of the South Florida sunshine and features a U-shaped outdoor courtyard that is the social heart of the hotel – a place to relax and recharge, whether lounging on the patio or around the pool. The landscaping features mature, local flora whose lush colours and tropical fragrances envelop guests.  Previews of what’s to come started earlier this year, when White Elephant Palm Beach’s signature restaurant Lola 41– a Nantucket staple – began serving its globally inspired dishes and local seafood specialties. 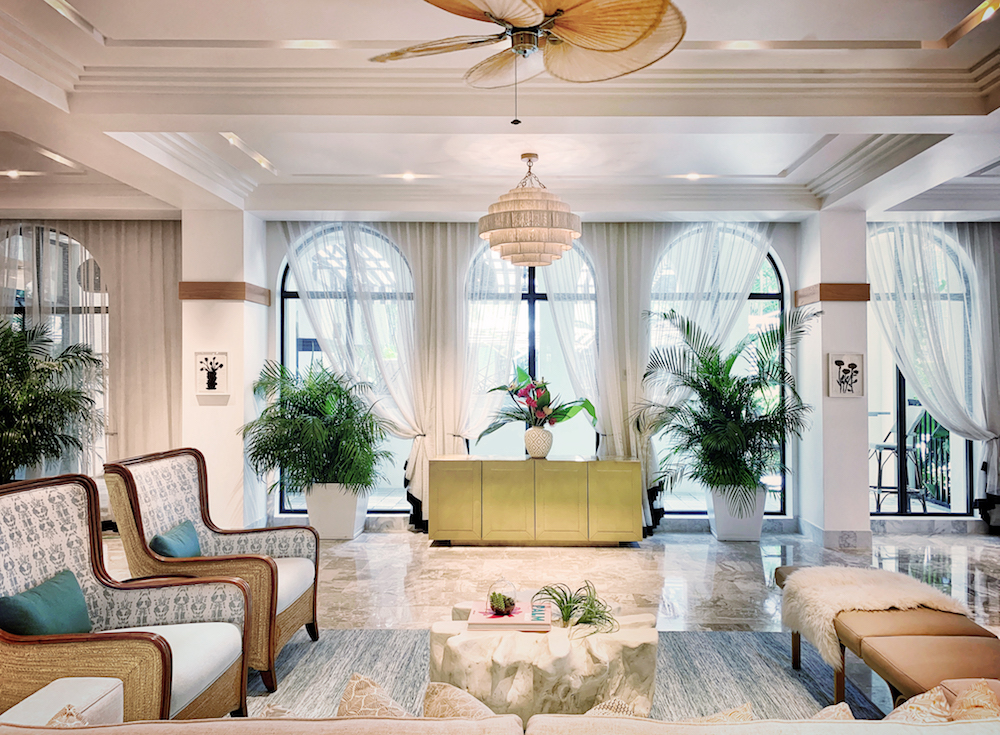 Image caption: In the lobby parlor, guests face a row of arched windows looking out onto the courtyard and outside restaurant seating. Sheer drapery filters the natural light and offers slight opacity, lending a sense of privacy and separation from the activity outside. | Image credit: Chi-Thien Nguyen/Elkus Manfredi Architects

The design captures the spirit of a grand home while maintaining the ambiance of a landmarked boutique hotel. Breaking from the bright pinks and greens that dominate the Palm Beach aesthetic, the White Elephant Palm Beach features a neutral colour palette with sleek metal accents and vibrant pops of colour. The hardwood floors, Carrara marble, elegant tiles and woven rugs are all interpreted with contemporary style.  Outside, the Mizner-style facade is painted a light, creamy-white colour with classic black-and-white striped awnings, terracotta roof tiles, and black trim to bring a fresh, sophisticated look to the classic structure. Guests will be welcomed onto the property by a seven-foot white elephant statue by Santa Fe-based artist Fredrick Prescott.  (A “sister” elephant statue, Trunket, is on the grounds of White Elephant in Nantucket .)

The statue is just one of 120 original pieces of colourful modern and pop art personally curated by the owners and Elkus Manfredi. The museum-worthy collection will be on display throughout the rooms and common spaces. Featured artists include Robert Rauschenberg, whose early creations in the 1950s anticipated the pop art movement, and Jennifer Bartlett, known for her small, square steel plates that are combined in grid formations to create large-scale works. Several pieces by painter Kenzo Okada, the first Japanese-American artist to receive international acclaim using abstract expressionist style, will be on display, as will works by Donald Baechler, part of the East Village, New York 1980s art movement. A 54-inch round acrylic work by Orit Fuchs was specifically created for the hotel and is a focal point of the lobby; while six prints by Yinka Shonibare, who will unveil a new public sculpture installation in West Palm Beach in 2021, will be found on the second-floor corridor. Doodle Boy, a 10-year-old British artist, was also commissioned to create 30 exclusive pieces for the powder rooms. Using clean black lines hand drawn with a thick marker, he incorporated a hidden signature elephant in each of his drawings.

Guestrooms and suites range from 510- to 3,000-square feet featuring custom-designed furniture. King-size beds will be outfitted with Pratesi by Rivolta linens with upholstered backboards accented in a colourful palm and flower print. The same fabric will be found on the back of the desk chairs and on the throw pillow piping. 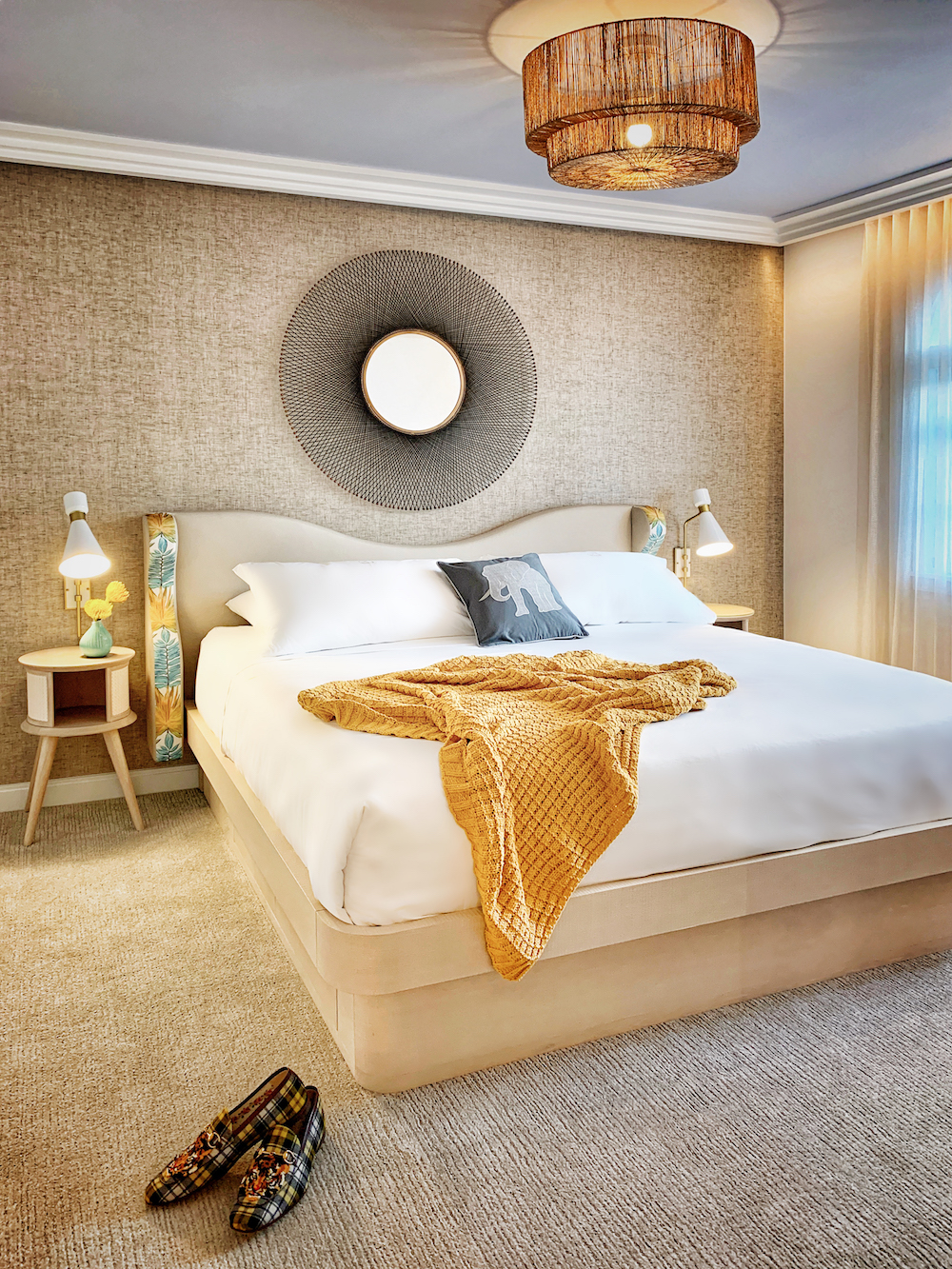 Image caption: Bedroom ceilings were painted a soft sky blue, keeping in mind both the view from the pillow and the view of the hotel ceilings from the street. The light fixture over the bed throws dramatic shadows, and the wall covering is in a natural fiber material by Phillip Jeffries. | Image credit: Chi-Thien Nguyen/Elkus Manfredi Architects 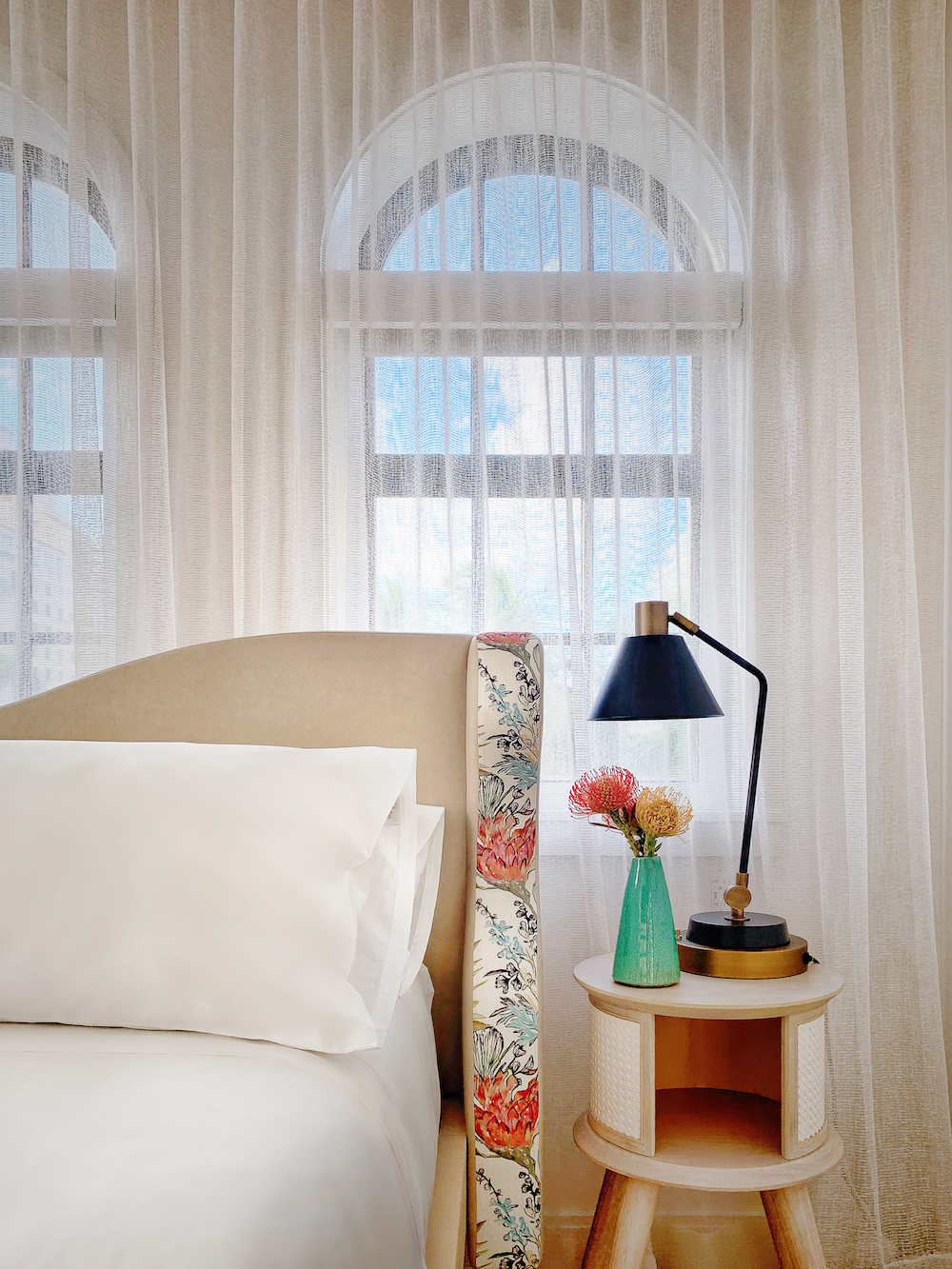 Image caption: All guestroom furniture and materials are custom designed. Small details pamper and amuse guests, from the pattern detail on the headboard edge to how the headboard dips in the middle so that ergonomically, the guest has enough height to lean into while reading, while window light is maximised. | Image credit: Chi-Thien Nguyen/Elkus Manfredi Architects

Other noteworthy pieces include console tables by Selamat Designs in collaboration with the heritage brand, Morris & Co, which are wrapped inside and out with authentic William Morris “Strawberry Thief” covering. The pattern was originally created in 1883. Each of the suites will be furnished with plush grey and cream armchairs and couches. The custom-designed wooden arches that frame the entrance to some of the rooms are a defining architectural element of the hotel. Other decorative accents such as bronze elephant door knockers, bold patterned throw pillows, rattan ceiling light fixtures, and black and white striped side tables are sprinkled throughout. The bathrooms feature marble tiles, double sinks crafted from stone, a dry vanity and glass-enclosed walk in showers with L’Occitane bath amenities. 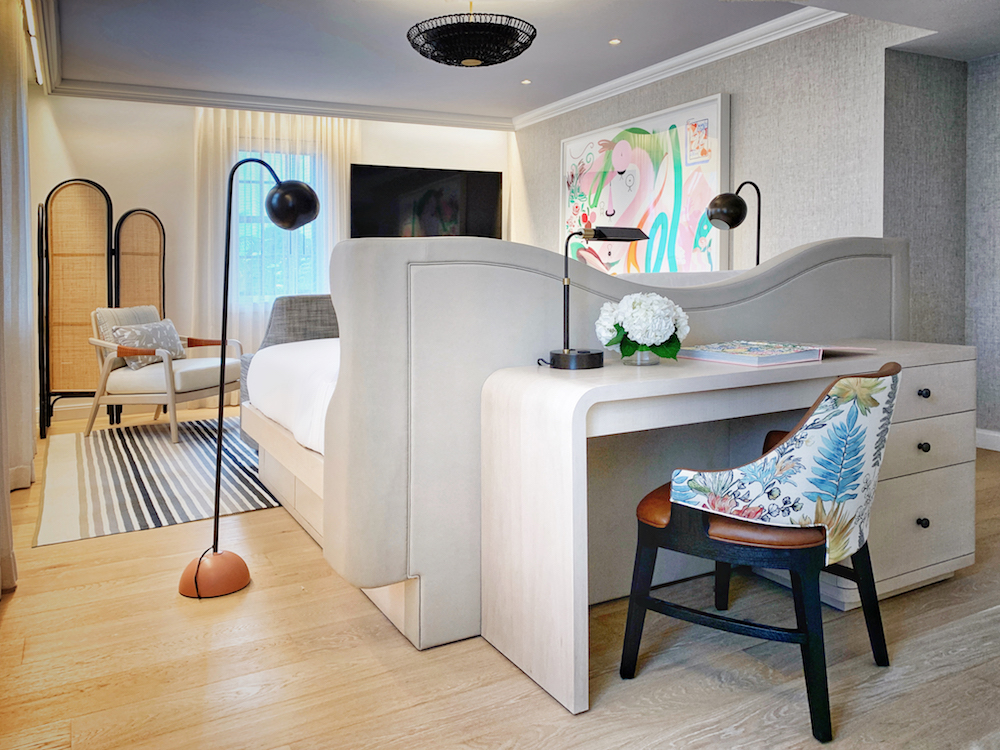 Image caption: The master bedroom in the Park Suite is the largest of the suite’s three bedrooms and includes a seating area at the foot of the bed. Behind us, double doors lead to the master bathroom. | Image credit: Chi-Thien Nguyen/Elkus Manfredi Architects

The two penthouse suites are ideal for those who want to entertain, with large living rooms, fully equipped kitchens, and terraces ranging between 800- to 1,200-square-feet. With views of Bradley Park, the Park Suite is a three-bedroom that can be expanded into four, and the ocean-facing Palm Suite is a two-bedroom that can be expanded into three. 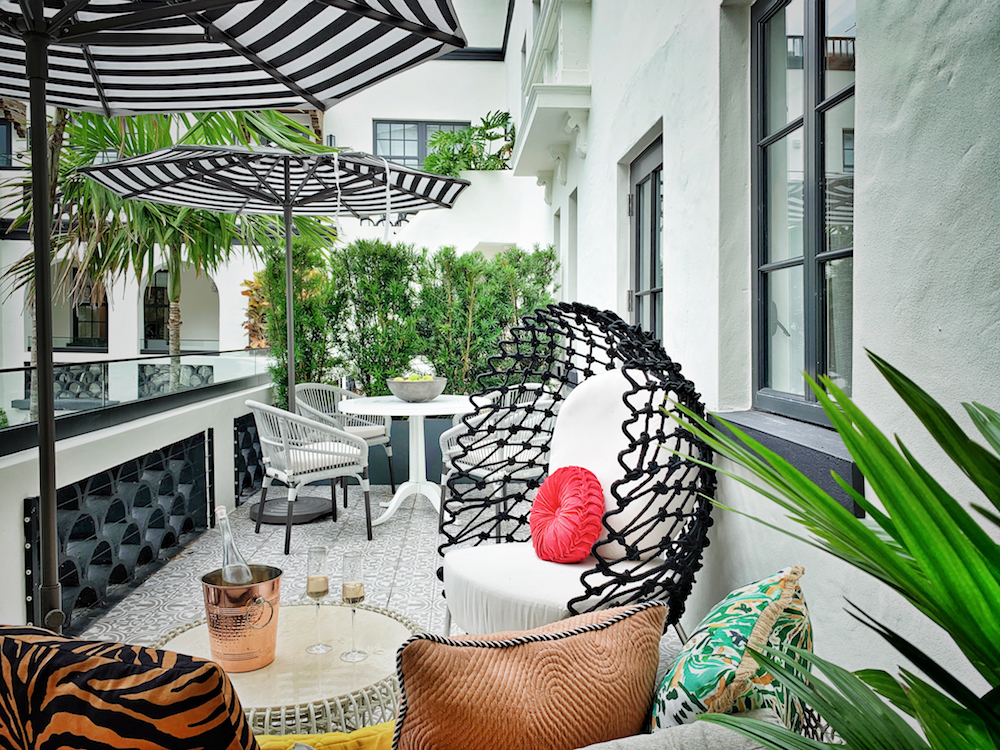 Image caption: All the hotel’s exterior furniture is by Janus et Cie, all in black-and-white to keep in tune with the graphic quality of the architectural language of the exterior. | Image credit: Chi-Thien Nguyen/Elkus Manfredi Architects