Sleep Sets 2018: Behind the keyhole

Four international leading design houses were set the challenge to collaborate with four separate companies for this year’s Sleep Sets at SLEEP + EAT. Hamish Kilburn investigated how each designer turned vision into reality…

It’s not an easy task by anyone’s imagination, but someone has to do it. Reviewing the Sleep + Eat Sleep Sets this year was an experience that inspired as well as taught. The major lesson was that it’s okay to look, think and work outside the hotel design box in order to create something for the future traveller.

This year’s equally talented designers of the Sleep Sets were asked to go where no Sleep Set designer has dared to venture before; to collaborate with well-known brands that had, up until now, had no relationship with the fascinating, visual – and at times unforgiving – world of hotel design – what had they let themselves into? Raising to the challenge, though, were the four internationally renowned design houses: HBA London, AB Concept, Denton Corker Marshall and Yasmine Mahmoudieh and soon after receiving their briefs, it was game on!

Several drafts later, deadline day approached. The leaders of each brand put down their tools and stood back to take in their work as the clock struck 10am and the doors of Sleep + Eat 2018 opened in Olympia London.

Creating what Creative Director of HBA London, Constantina Tsoutsikou, described as the ‘modern-day explorer’s suite’, the company took guests almost completely into another world. Awakening the curious explorer in everyone who walked through the door, HBA London allowed us to explore the unexpected in the most immediate of surroundings. Stimulated by the beauty of the natural world and the importance of our connection with nature, the set cleverly encouraged the uncovering of treasures, the examination of exciting specimens and the drive to learn. 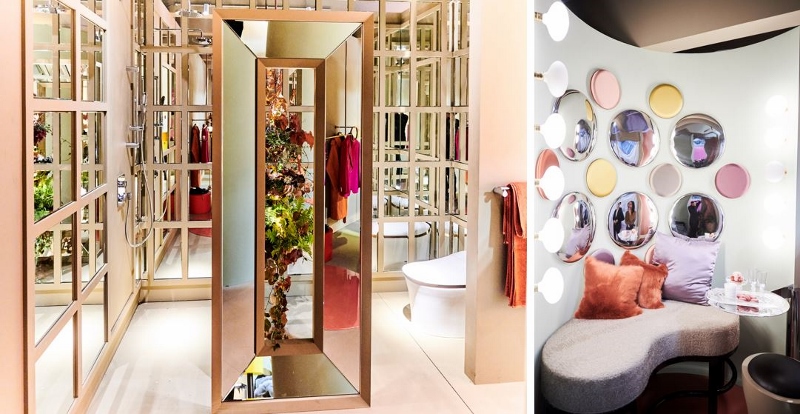 Ed Ng and Terence Ngan bravely took inspiration from ‘fetish’ and one of the celebrated French patissier-chocolatier Pierre Hermé’s seasonal collections, to develop the sensual and provocative Fetish Suite. The suite was a safe haven for guests to indulge in their guilty pleasures, complete with delicious silver macaroons. A space of coquettish hide and reveal and a sense of voyeurism were created through the use of frosted and reflective mirrors and secretive spaces, adding to a tantalising experience as visitors were able to journey through the room. 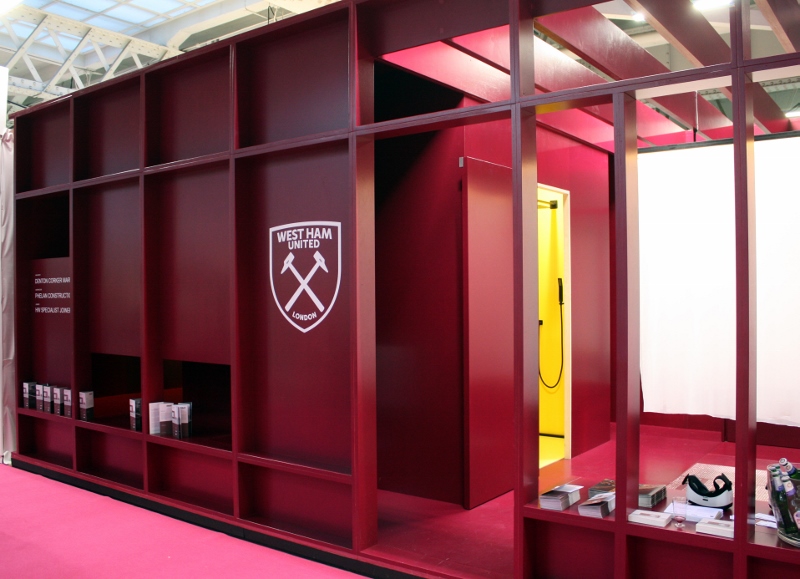 Denton Corker Marshall, meanwhile, explored the locker room, or so it seemed. The lead designer, Angela Dapper, explained how she examined the transition between collective and individual space, while reflecting upon the layers of history and ritual of West Ham United when creating the space. The concept of the room offered moments to engage and to reflect, creating new personal experiences for each guest.

The colour of West Ham, a deep claret, was used throughout, creating an intense backdrop for the concept room. This intensity was a dramatic contrast to the calm nature of the Sleep area, made from natural timber, warm light and natural bedding materials. The Sleep area was a soft space, reflecting the personal and quite beautiful stories we heard from West Ham fans. One couldn’t help but noticed the utilisation of the bed, which reminded me of the beds used in New Road Hotel. The bathroom was modest and minimal, again washed with a single colour, in this case yellow,with very streamlined matt black fittings.

Inspired by literary themes of happiness, love and wisdom that transcend space and time, Yasmine Mahmoudieh has created a narrative for her Sleep Set based on three different Penguin Books from diverse authors from varying points in history: Plato’s The Symposium, Selected Poems of Rumi, and Elizabeth and Her German Garden by Elizabeth Von Arnim. Each area within the room set will take its cue from a book, bringing leitmotifs to life and giving thoughtful visual expression to canonical written material.

Interestingly, it was decided that this year’s sets would not be judged considering that each designer had different briefs to work on. This was a decision that left the audience of Sleep + Eat divided, but I for one would not have enjoyed being on that panel to make that decision. Considering the hype and anticipation of these four areas that grew before the event, audiences felt as if the Sleep Sets this year completely exceeded expectations, and I would have to agree.