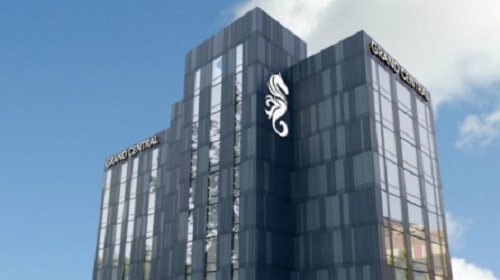 Following revised planning permission being granted for the Grand Central Hotel, Hastings Hotels has announced that its investment will be £53 million on what will be Northern Ireland’s largest hotel.

Building work is now well under way following the approval of the revised plans by Belfast City Council which will see an additional 104 bedrooms bringing the total number to 304 with the creation of over 150 jobs.

Sir William Hastings, Chairman of Hastings Hotels said: “We are pleased that the revised planning permission for the Grand Central Hotel has been approved. This represents our company’s biggest single investment to date of £53 million and is the sum required to create a top quality hotel befitting the name, Grand Central, and of which Belfast City can be proud.

“The Grand Central Hotel will be more than a hotel when it opens in mid 2018. The original Grand Central was built in 1893 and was the thriving hub of Victorian Belfast as well as the finest hotel in Ireland. Winston Churchill, the King of Belgium, Al Jolson, Mario Lanza and the Beatles were all guests who enjoyed its luxurious hospitality. I am extremely proud to be able to pay tribute to this much loved property of the past by naming Belfast’s newest hotel after it.

“The new branding for the hotel will incorporate the Seahorse which is part of Belfast’s Coat of Arms and celebrates the City’s Maritime history. Old photos from the Glory Days of the Grand Central show the Seahorse motif featuring on menus and plates and our new interpretation of this classic Belfast emblem is a permanent reminder of the new Grand Central’s connection with its elegant past,” Sir William continued.

“The Grand Central is a legend reborn and to celebrate this we have created a building wrap which will be changed at regular intervals before the hotel opens. It will help tell the story of the hotel as it is being built and pay tribute to some of the local companies we are working with who are each playing key roles in helping Hastings Hotels create this major development.

“We look forward to working with a wide range of local companies during this major project. Our lead construction partner is Graham Construction and their building expertise and quality of workmanship is second to none. The structural steel has been fabricated in Lisburn and the cladding is being designed and procured through a company based in Moira. The mechanical and electrical contractors are also local as are the bricklayers, joiners, plasterers and even the tower crane driver,” Sir William concluded.