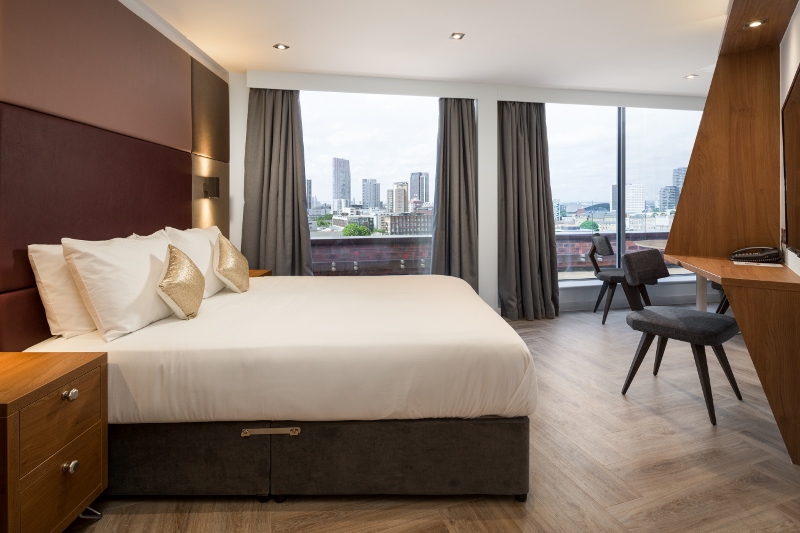 Roomzzz has announced it is launching its first London-based development in Stratford on July 1.

“We’re delighted to be launching our first London Roomzzz aparthotel in Stratford, an area booming in terms of regeneration and growth,” said Naveen Ahmed, CEO of Roomzzz. “There are exciting plans for the area over the next five years, and we are proud to be a part of it.

“Flexibility is key for the Roomzzz brand – our guests choose us as we combine the benefits of a conveniently located apartment with the security and convenience of a 24-hour concierge, it’s the best of city living.”

The suites range from the modern open-plan Neo, through to the spacious superior Liberty suite, which comes as one, two or three bedroom, making them ideal for both families, groups and long-stays. The jewel in the crown are the Dezign penthouses, which boast spectacular views of London’s iconic sights from the sweeping rooftop balcony.

The aparthotel also features a brand-new co-working environment, workinc, which taps into growing demand for flexible workplaces in the capital.

Roomzzz London Stratford is in the heart of East London’s primary retail, cultural and leisure facilities, including the London Stadium, Westfield Shopping Centre and the Queen Elizabeth Olympic Park. Situated on West Ham Lane, Roomzzz is within easy reach of both Stratford International Station and Stratford Tube with easy access to the city centre.

The Roomzzz brand already has eight aparthotels across the country, including Manchester, Leeds, Chester and Nottingham. The brand has ambitious growth plans with further developments in the pipeline for Edinburgh, Harrogate and York, as well as an extension to the existing Newcastle property.