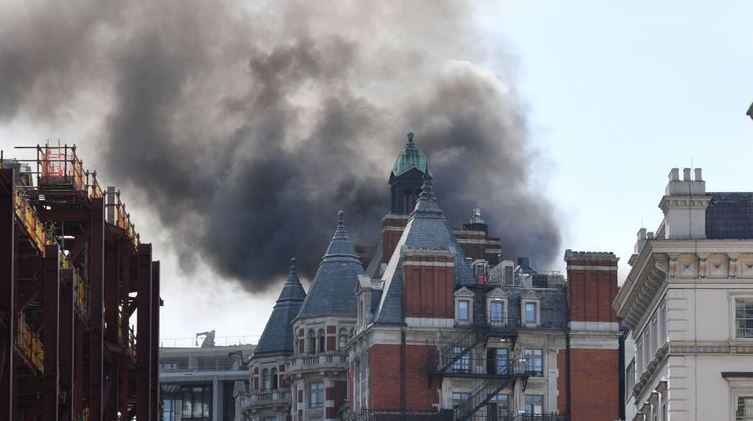 Just one week after completing “the most extensive restoration in its 115-year history”, the Mandarin Oriental London yesterday suffered a devastating blow when a fire broke out on the top floor…

The Mandarin Oriental has made a comment after a fire broke out yesterday afternoon.

“Plumes of smoke were seen rising from the five-star Mandarin Oriental in Knightsbridge just before 16:00 BST,” reported the BBC. Among the guests that were evacuated from the burning building was singer Robbie Williams who described the drama to the BBC: “I went on the balcony and looked up and there was just billows and billows of smoke.

“I came back in from the balcony and said, ‘The hotel’s on fire,’ and then the next thing a knock at the door came and there was a bellboy there and they said, ‘Get out’.”

The fire was believed to have spread across a vertical façade of plants and vegetation and into several floors of the hotel but was quickly extinguished, as reported by FT.

It happens after the hotel last week announced that its recently completed renovation, overseen by internationally renowned designers Joyce Wang and Adam D. Tihany was to confirm this historic hotel’s position as one of the best in the world.

In a recent press release from the hotel brand, the renovation was described to have given all 181 guestrooms and suites a more luxurious and comfortable feel than ever before. The designers took inspiration from art deco and included carefully curated artworks, and custom-designed furniture. The hotel had also installed a green living wall which surrounds the inner courtyard.

Since the fire broke out, the hotel has made a comment: “We would like to express our appreciation to everyone who has conveyed their concern about this sad incident.

“It is too early at the present stage to assess the full extent of the damage. A full investigation is under way and will take time to complete.”

Our thoughts are with the hotel and the Mandarin Oriental brand at this time.