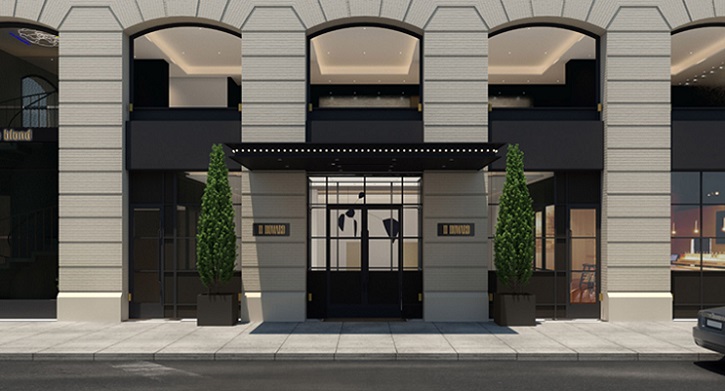 New York’s hippest new hotel – 11 Howard – has opened in SoHo and has all the markings of its owner’s style. However, in an uncharacteristic move, Aby Rosen has also pledged to donate a percentage of the hotel’s room revenue to the Global Poverty Project.

In a similar vein to his other properties, Paramount Hotel or Gramercy Park Hotel, Rosen’s new $180 million hotel is aimed at a ‘fashionable clientele’, featuring Scandinavian design and tablets in every room for ordering food or drink.

Three designers joined forces on the 221-room project – Anda Andrei with SPACE Copenhagen’s Signe Bindslev Henriksen and Peter Bundgaard Rützou – who were tasked in implementing the self-confessed ‘conscious hospitality’ ethos of the hotel into its design.

Wooden floors, unique rugs as well as custom furniture and lighting exclusively designed for the hotel by Henriksen and Rützou are the order of the day. Custom artwork specifically chosen by Rosen and Andrei dots the walls which also feature 11-foot-high ceilings and oversized windows, allowing for abundant natural light—unique in this area of the city. Bathrooms are finished in marble and brass, with specially procured products made from organic botanical ingredients.