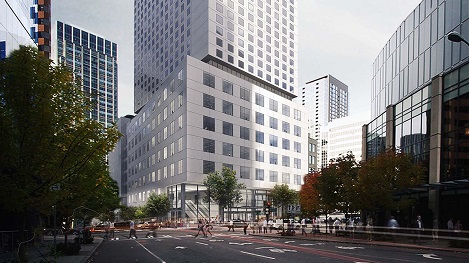 LMN Architects, a multidisciplinary design firm with a reputation for distinctive, community-focused projects, announces the topping out of the building podium for the new Hyatt Regency in downtown Seattle. 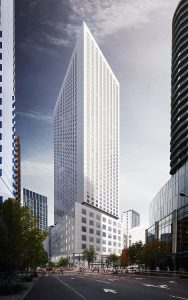 Positioned at the nexus of Seattle’s downtown commercial, convention, and high-rise residential neighborhoods, the 1,400,000-square-foot Hyatt Regency Seattle synthesizes a diverse mix of urban influences into a skyline-scaled, mixed-use building. The tower’s monolithic composition will provide a bold, yet quiet, counterpoint to the highly articulated neighboring towers; its ethereal exterior conceived to dissolve and merge into the silvery sky as it rises above surrounding buildings.

The 45-storey, 500-foot-tall building is composed of two primary volumes: one, a semi-detached, eight-story podium bisected at street level by a mid-block connector; the other, a 37-story tower. The podium will provide 105,000-square-feet of meeting and ballroom space integrated with a two-story glazed base featuring a restaurant and hotel lobby functions. The tower above will host a 1,260-room hotel. The tower will rise above the podium’s rooftop terrace atop a glass-enclosed fitness center and club lounge.

The building will activate the city at street level through a series of highly transparent spaces including the lobby, porte-cochere, restaurants, bars, and shops. Ground level spaces are designed to spill out onto the wide, landscaped sidewalks—a visual merger of inside and outside. The second level will feature additional retail, including a grab-and-go market, a large bar and restaurant, and expanded lobby lounge space for hotel and meeting guests.

The tower’s placement on the southwest corner of the block will allow it to knit together with the dense commercial high-rises of downtown and the convention center expansion. The overall massing strategy will minimize shadows cast over adjacent blocks to the north where the lower height of the podium aligns with the residential and mixed-use neighborhood. A new mid-block connector will interface with an existing alley for pedestrian, garage, and back-of-house access within the interior of the block, leaving the street perimeter free for continuous public space with wide sidewalks, street furnishings, and generous plantings. A vertical window wall rising above the mid-block connector will divide the podium into two smaller volumes. The northern portion will be devoted to ballrooms, and feature a pre-function hallway and event space that will open to views of Stewart Street via a deep-set window wall. The southern portion will contain meeting rooms. Paintings and sculpture, located throughout the building’s public spaces, will animate the building’s refined aesthetic.

The hotel, which will be operated by Hyatt Regency, is expected to be completed in 2018. LEED Gold Certification is anticipated.