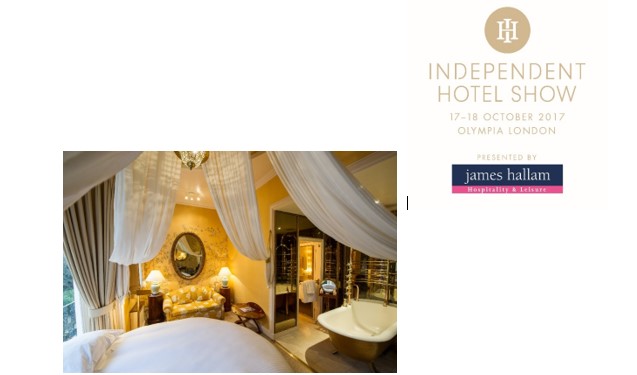 Established interior designer Harriet Forde has been commissioned to put together ‘The Perfect Hotel Bedroom’ for the Independent Hotel Show.

Harriet, a director of the British Institute of Interior Design, will use her vision to build a real-life version of a hotel bedroom on the show floor. Guided by consumer preferences in areas such as lighting, soft furnishings, technology preferences and storage requirements, she will also use furnishings and equipment from the show’s exhibitors to help create it.

The Perfect Hotel Bedroom, in partnership with Chic Retreats, is a brand-new feature for the Independent Hotel Show and has been determined by the results of a survey completed by over 1,800 consumers. Additional research and industry comment will also be included in a final report to be available for hoteliers to take away from the show.

Harriet, who works on both hotel and residential projects in the UK, Europe and the Middle East, says the line between residential and hotel interior design has become ‘increasingly blurred’ in recent years as hotel guests seek a more ‘at home’ environment with aspirational elements.
“Hotel bedrooms have become less formal and as people become more design literate, guests enjoy bedrooms that are furnished with design classics that they might recognize,” she says. “Mid-20th century design is making a comeback in the residential sector which can also be seen in the more unique hotels in East London.”

Harriet says lighting has become an integral part of hotel bedroom design as it influences the ambience of the room. Natural materials such as wood, marble and coloured glass are also increasingly being used in hotel design she has found.

However, some of the traditional service aspects we associate with a hotel stay, such as room service and the mini-bar are waning in popularity she feels.

“Today’s hotel guest is becoming more health conscious and requires healthy meals not normally available on room service menus, and are less likely to pay for a chocolate bar from the mini bar,” adds Forde.

Having begun her study of interior design at the London School of Furniture, Harriet went on to graduate from the prestigious Central St Martin’s university with a degree in textiles. Following more than 10 years’ experience in the hospitality sector — working for the likes of Richard Daniels, Richmond International and Areen Design — she eventually set up her own practice in 1999 where she continues to personally head every project.

Harriet is applying the standard design stages to The Perfect Hotel Bedroom – concepting, design development, design detailing and documentation, execution and installation. The survey results are the ‘client’ with whom there would normally be lots of discussion and interaction, so to aid the process of getting into the space mentally she has created a profile of the guests to bring it alive.