Gleneagles to redesign its famous restaurant 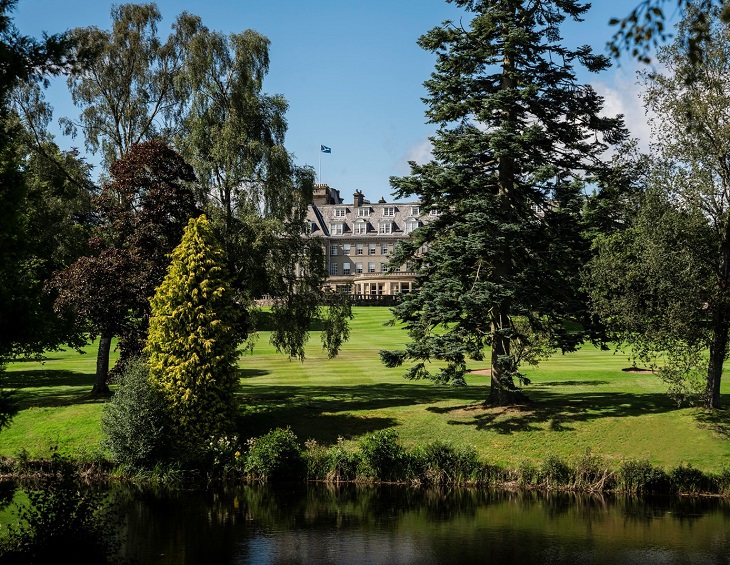 With the aim to bring back the glamour and decadence of fine dining experiences of the 1920s and ’30s, Gleneagles will in May 2019 unveil the relaunch of its famous restaurant, The Strathearn following a design transformation by Ennismore Design Studio.

The space – which has welcomed a host of famous faces over the decades, from Vivien Leigh, Sir Laurence Olivier and Sir Sean Connery, to John Travolta, Bob Hope and Her Majesty The Queen – is to unveil a new look inspired by an era when glamorous socialites would travel in style from London to Gleneagles to enjoy summer seasons of country sports and decadent dining.

The new designs will celebrate that elegant spirit through a setting that evokes the theatre of the outdoors, the beautiful flora and fauna of Scotland. The creation of a stunning mosaic-floored orangery will offer beautiful views of the estate and the Ochil Hills across the seasons, while a new stage for musical performances will complement the elegance and drama of the rich décor – evocative of first-class carriage journeys in the early twentieth century.  A new kitchen-style breakfast servery will also double up as an occasional private dining space – breathing fresh life into the area that housed Gleneagles’ kitchen in the 1920s.

“After years of meticulous planning, 12 months of interior design work and four months of careful renovation, we can’t wait to unveil the beautiful new look in May.” – Sharan Pasricha, CEO of Gleneagles and Ennismore

Dinner at The Strathearn will be an even more decadent affair, with traditional gueridon service from bespoke dining trollies bringing excitement and energy to the room as a selection of classic dishes are finished at the table. Personally attending each table, the team will add a theatrical flair to the evening, as they effortlessly carve Scottish smoked salmon, prepare and dress a salad, or flambé a ‘Steak Strathearn’ on request.

“As one of the final strands of our three-year design transformation, the renovation of The Strathearn restaurant was always going to be one of the most important phases of all,” said Sharan Pasricha, CEO of Gleneagles and Ennismore. “After years of meticulous planning, 12 months of interior design work and four months of careful renovation, we can’t wait to unveil the beautiful new look in May.”

“Originally known simply as ‘the Dining Room’, the restaurant has been a destination for decadent dining and lively celebrations since Gleneagles first opened nearly 100 years ago. It’s been cherished by generations of guests, so we didn’t want to radically change the fabric of the space or the spirit of the experience. Instead, we wanted to take the essence of The Strathearn and turn up the volume. By amplifying all the elements that are so well loved – the elegant décor, the history, the lively atmosphere, the culinary theatre and the exceptional food – the team has brought back the vibrancy, energy, playfulness and glamour of fine dining experiences a century ago.”

The Strathearn will be overseen by Restaurant Manager, Daniel Greenock, who has moved home to Scotland having honed his craft at Marcus Wareing’s Michelin-starred restaurant at the Berkley Hotel and the world-renowned three Michelin-starred Eleven Madison Park in New York.

Now under new owner Ennismore, Gleneagles has enlisted the skills and expertise of some of the UK’s most acclaimed designers including David Collins Studio, Timorous Beasties, Macaulay Sinclair, Goddard Littlefair and Ennismore’s own in-house design studio – with the aim to create designs and spaces that celebrate the rich, glamorous heritage and beautiful architecture for which the hotel is famed.

The latest redesign announcement follows Gleneagles’ Conor O’Leary winning Hotelier of the Year at The Brit List 2018 for his unmatched leadership style.