Celebrated designer Ian Schrager brings the celebrated EDITION brand to the metropolis of Shanghai, with an unprecedented blend of leisure and entertainment within one luxury hotel…

Times change, people change, cultures change. Few cities move as fast or adapt as quickly as the city of Shanghai. Ian Schrager, the inventor and innovator of the boutique hotel concept, now brings the modern luxury of the EDITION Hotels brand to Shanghai.

“The Shanghai EDITION is housed in one of the city’s finest buildings.”

Following the success of the EDITION Hotels in London, New York, Sanya, China and Miami Beach, The Shanghai EDITION represents a new kind of innovation and authenticity in luxury travel; a modern oasis of comfort at the heart of one of the world’s most populous cities. By understanding that a hotel is more than just a place to sleep—it’s a hub, a meeting place, a culture of commerce, work, life and play—Schrager creates not just a hotel but a seamlessly integrated experience, a small city within a city. It’s an international ethos with a local product: World-renowned architects, designers, chefs, mixologists, fabricators and artisans have come together at the meeting point of unmistakable Shanghai culture. This one-of-a-kind modern meeting point innovates and extends the very concept of hotel: dining, recreation, entertainment, work, relaxation, meeting point and landmark in one.

Combining two very distinct yet complementary buildings, The Shanghai EDITION is housed in one of the city’s finest buildings; the former headquarters of Shanghai Power Company on Nanjing Road, along the tree-lined Huang Pu River port on the Bund. This Art Deco monument houses the public area of the hotel, comprising a magnificent lobby, Michelin starred Chef Jason Atherton’s new restaurant, Shanghai Tavern, and a world class spa as well as multiple bars, night club, rooftop and meeting and event areas. As well as being updated and renovated, the heritage-protected historical building now flows into the state-of-the-art skyscraper development, designed to coexist and harmonise with the historical structure, while bringing it into the present day. This multi-dimensional space creates a synergy, designed for movement and flow. In the new tower, 145 rooms and suites, many with unrivalled views of the Bund, will be accompanied by an array of wining and dining spaces, including HIYA, a new Japanese restaurant by Jason Atherton on the 27th floor and Shanghai’s stylish incarnation of Punch Room, the sophisticated cocktail lounge first made famous at The London EDITION and ROOF, a garden rooftop bar with 360 degree views of Shanghai.

“Yet, it was essential that the hotel’s spaces and interiors were infused with a contemporary, sophisticated design vernacular.”

The historical pedigree of the development and renovation are rich. As well as the local heritage of the Shanghai Power building, the public spaces were created with an eye to an old-world sensibility; the likes of a traditional, English country estate or the quintessential London private gentleman’s club. 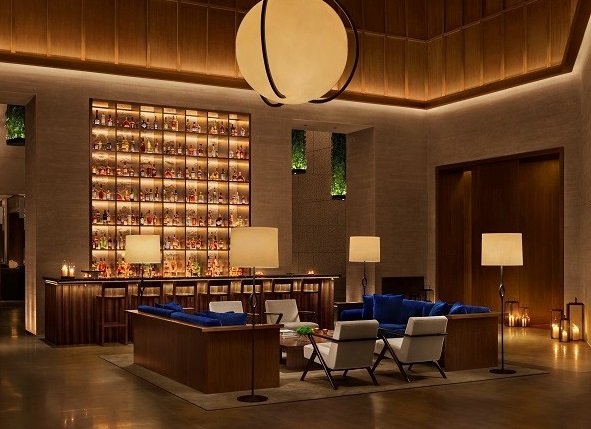 Yet, it was essential that the hotel’s spaces and interiors were infused with a contemporary, sophisticated design vernacular. In Schrager’s signature style, The Shanghai EDITION possesses a dynamic fusion of old and new, embodied by the dual nature of the buildings’ development. The striking Lobby and main entrance to The Shanghai EDITION features a centerpiece light custom designed by the French architectural and decorative designer Eric Schmitt. The glowing sphere, held delicately in the grasp of gently curved metal prongs, hangs elegantly like a piece of jewelry in the center of the lobby. The atmospherically designed space includes a programmable LED feature on the underside of a cantilevered canopy, which welcomes guests in from the cobblestone driveway. The 9.5 meter high Grey stone walls establish sense of grandeur and solidity in contrast with rich walnut fittings which provide a sense of intimacy and warmth. This dichotomy is a signature of the EDITION brand. In keeping with Ian Schrager’s philosophy of the hotel lobby as ‘a new kind of gathering place’, the Lobby Bar, one of nine in The Shanghai EDITION is inset with a bespoke plaster relief artwork inspired by carvings typically observed on Shikumen (stone-gated) housing, which is unique to the fast-disappearing, traditional Shanghai urban typology. 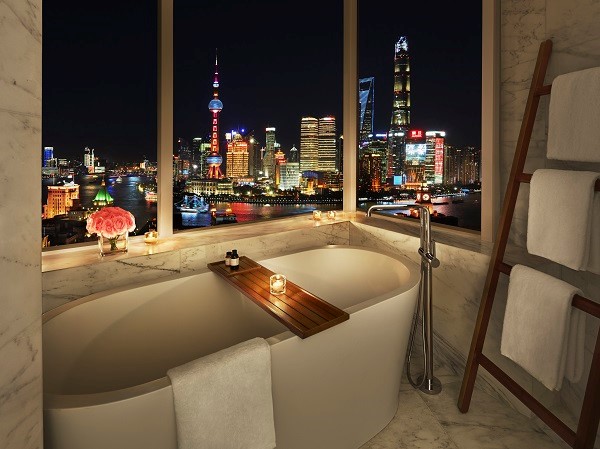 The 145 guest rooms and suites at The Shanghai EDITION bring laid-back modern luxury to a new era. Every room features the conveniences travelers and revelers have come to expect and rely on. State-of-the-art beds are adorned with imported luxury Anichini linens and unique and custom designed furniture with carefully selected textiles. The bathrooms are finished in white marble, detailed in contrasting black metal, with custom-scented Le Labo amenities as standard. The slanted windows, all of which give breathtaking views of Shanghai and The Bund, add to the feeling of insulated calm within the rooms. The walls and floor of the bedroom and living areas are clad in light oak, creating a sense of warmth and domesticity.

Beyond the home-away-from-home accommodation, guest amenities raise the stakes of contemporary hotel offerings. On level 5, the swimming pool has been modelled as though carved from a solid mass of Pietra Serena from an ancient Roman mountainside, and overlooking the urban landscape. The gym, meanwhile, on level 7, does away with the crowded utilitarian standard of contemporary gyms, and combines wellness and holistic design into the need for physical exertion, open 24 hours. The state-of-the-art gym equipment was selected, no expenses spared, by renowned fitness experts, and installed on a smoked oak skin that lines the floor and walls. The indoor gym gives onto a large outdoor terrace, where guest can rest, meditate and practice tai chi, yoga, and cardio against an urban backdrop. 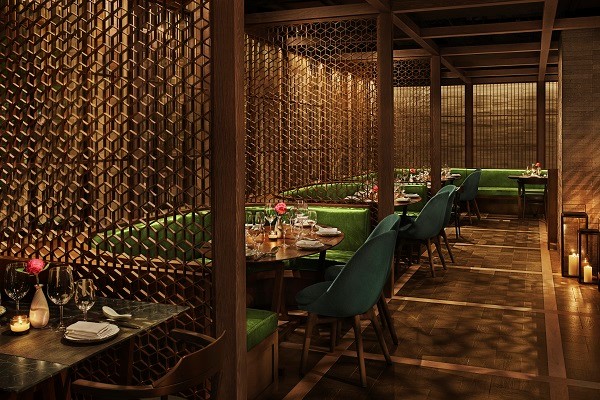 On the 27th floor of the skyscraper sits Jason Atherton’s HIYA a Japanese lzakaya-inspired restaurant, designed by Neri & Hu. Meaning ‘Clouds in the Sky’ HIYA is slick, sophisticated and glamorous, taking cues from Atherton’s London restaurant, Sosharu, to become a nighttime destination for Shanghai’s elite. Rising up the grand spiral staircase from the Shanghai incarnation of The London EDITION’s award- winning Punch Room, a modern reincarnation of London’s 19th-century private clubs, and on the Mezzanine is the ROOF. As guests enter the Roof they behold one of the most spectacular panoramic views of Pudong from the Bund. The main bar and high seating is enclosed within a wooden trellis intertwined with climbing ivy, where an open-air lounge area offers guests a comfortable and intimate setting for casual drinks with a view. From here, a range of EDITION’s classic and innovative libations will be served, focusing on champagne and champagne-based cocktails.

The threshold that connects the heritage building and the postmodern tower is the Urban Lobby. Acting as a portal between the accommodation section and the public entertainment sections of The Shanghai EDITION, this magnificent space is home to a hanging garden, its lush greenery suspended from the ceiling. The back wall is covered by an awe-inspiring 7-story antique mirror, sourced and refurbished specially for this space, heightening the spatial illusion that one is walking beneath a floating, indoor forest. As a spectacular centerpiece to the contemporary space, the bronze spiral staircase winds continuously down three floors from the rooftop garden, giving access to a spectacular 3-level eating and drinking area with commanding views of the Bund.

The heritage building accessed through the hotel’s Urban Lobby and through a separate public entrance plays host to multi-level experience for dining, drinking, dancing and amenities starting with Shanghai Tavern, Jason Atherton’s all-day dining, brasserie style restaurant located on the first level. Drawing on Elliot Hazzard’s period architecture and magnificent coffered ceiling, the design seeks to reference the layers of history behind the Shanghai Power Company Building; a communal space that has been interior designed for pocketed intimacy. One floor above hosts Canton Disco, a traditional Cantonese restaurant concept by the celebrated Black Sheep Group, with a contemporary update at its fore. The high energy atmosphere, addictive cuisine and unpretentious service paints a perfect picture of modern Shanghai throughout the main dining room as well as the five exclusive private rooms. The next level provides a dedicated multi-purpose space for meetings and events for up to 200 guests  followed by the Club Room on level five – a gentleman’s club-inspired lounge area that exudes a sense of warmth and exclusivity. The sophisticated Club Room features two indulgent lounge areas, with a nine-seat bar as well as a screening room and a KTV karaoke room.

The Spa at The Shanghai EDITION on level 6 reflects a sophisticated approach to beauty, wellness and wellbeing with an inspired blend of luxury and comfort. The Spa features a total of six treatment rooms and suites, manicure and pedicure services, sauna, an expansive relaxation area with fully equipped bar and a retail boutique. Showcasing the best wellness and beauty practices, The Spa delivers authentic Asian treatment inspired by western rituals featuring top-shelf products by Amala and Intraceuticals – designed exclusively for EDITION’s well-travelled and elegant guests.

Level seven plays host to the brand new nightspot: Electric Circus, a fresh kind of club and VIP lounge for Shanghai. Conceived in the Studio 54 tradition, with its dramatic lighting, otherworldly interior and signature EDITION cocktail mixology, Electric Circus will play host to some of the world’s top DJs and performers, destined to become an unmissable venue in the Shanghai nightlife scene. For discerning guests requiring the utmost in discretion, Electric Circus houses the city’s ultimate private room with its own dual-access private entrances to maintain privacy. 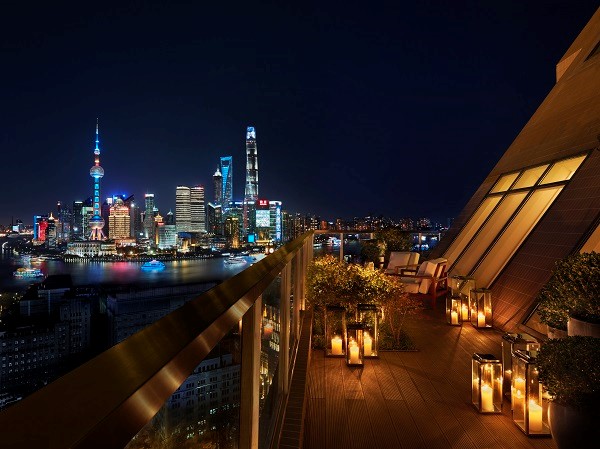 On the rooftop, situated on the 8th level   of the modern building, sits a fully landscaped Roof Garden, a perfect oasis, and one of few urban green spaces in Shanghai. Composed of a patchwork of brick and lawn terraces of differing heights, the roof garden mixes Chinese greenery with luscious, tropical horticulture. The richly planted rooftop features an under-the-stars movie theatre, a games area for lawn bowls and croquet, daybed seating, as well as the service of a full bar with, food and snacks on the roof.

The Shanghai EDITION distills the most central and desired services with precision, doing away with the obsolete, dated baggage of the prim, regulated hotel environment. This highly stylised hotel functions as a “home away from home,” catering to the modern-day traveler by providing comfort and ease with refinement: now a signature that defines the EDITION brand.