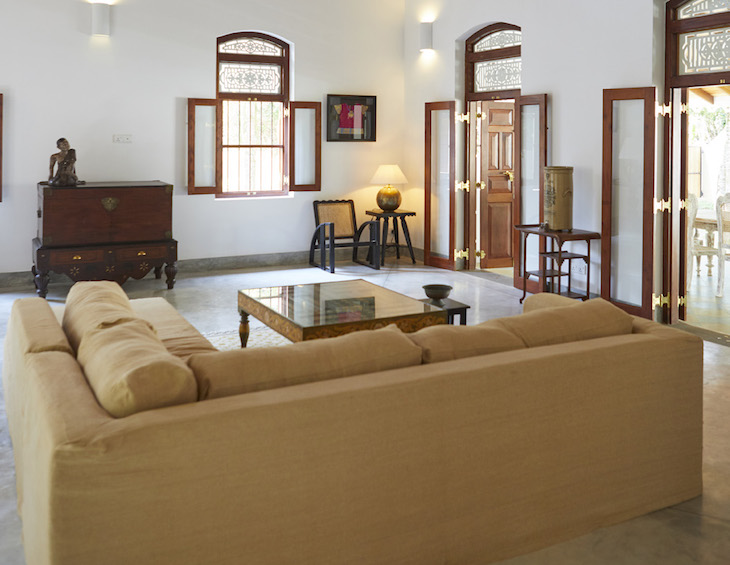 As an interior designer, I have always extolled the virtues of how a successful design makes my clients feel – and the aesthetics form only a part of that.

A space should functionally work, but it must also awaken as many senses as possible and I believe that comes from the designer at design stage connecting at a human level. Right from the get-go, we should be thinking about all the elements that will be pulled together to create an awakening for a user within a space that will stay with them long after we have gone.

“I deliberately allowed the design thinking to evolve as I discovered materials and fixtures that would fit the bill.” – Dee Gibson

Building a luxury hotel from scratch was an opportunity for me to put this into practice, and I deliberately allowed the design thinking to evolve as I discovered materials and fixtures that would fit the bill. Of course, the story doesn’t end there, we have a responsibility as hoteliers and designers to create and build sustainability, especially considering residential design trends can be influenced by the hotel market. Sharing this information and passion encourages others to join us; to engage emotionally and create spaces that people understand and want to talk about and replicate themselves. 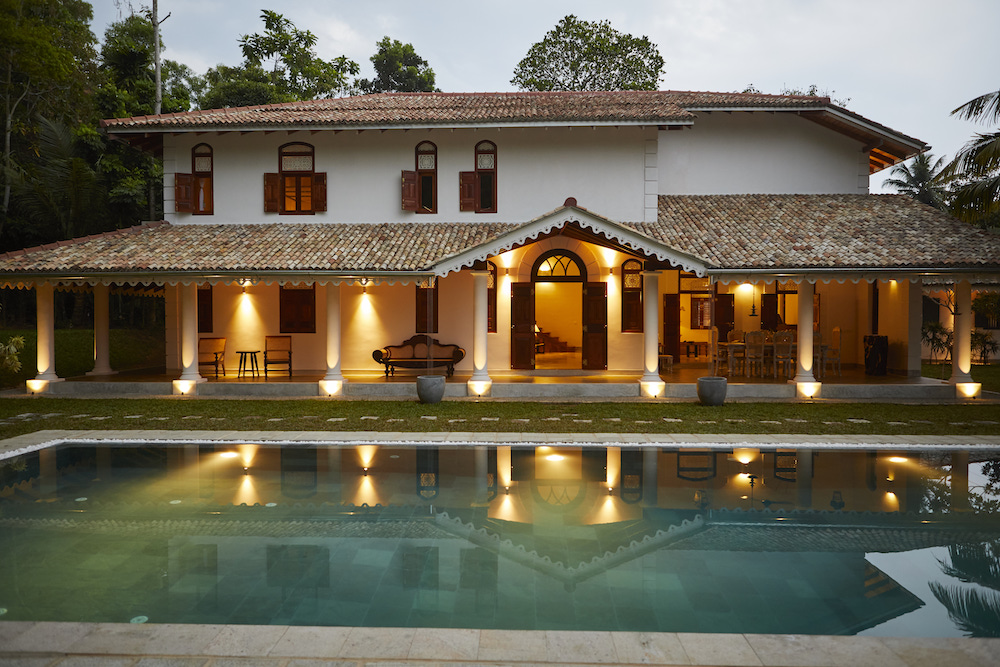 Image caption: The colonial Walauwa architectural style of the building had to be restored sensitively in order to retain its charm and character

The hotel is on a gorgeous natural piece of jungle backed by a tall, golden cliff and 100 metres from the beach. Its garden was overgrown and the original derelict building had to be razed to the ground (not part of the plan). With a finite budget, it was important not to cut corners just to save money. At the same time, we had to balance the requirements of a demanding, luxury travel market. The challenge was to build and respect the elements of sea air, enormous trees, wildlife and extremes of weather and make the right financial choices around this.

The hotel is created in the colonial Walauwa architectural style associated with “Headmen” and the aristocracy, so the look was to be ultra luxury but had to be built responsibly. We wanted to evoke feelings of nostalgia for beautiful bygone eras, far away from the glass and steel structures that many developers favour today. 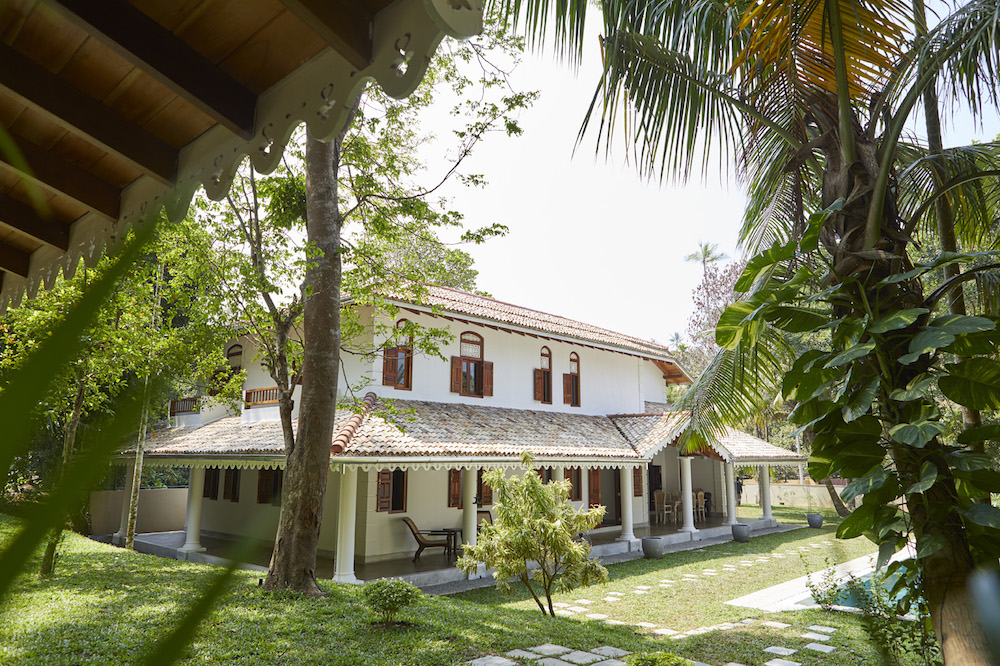 Image caption: Elements such as clay roof tiles and shutters were up-cycled to keep the style of the property

We stripped the bungalow of every inch that could be re-used. Original clay roof tiles were removed one by one and saved, shutters, doors, even the rotting fretwork was all dismantled. It was important to us to re-use as much as possible but also replicate original patterns wherever we had to make new. The charm of the original building had moved us and this was the closest I could get to completely replacing it and creating a sense of history.

The original grounds were bursting with tropical life; the trees and flora giving home and sanctuary to countless monkeys, birds and other wildlife. We carefully hand selected and cut back a small number of trees that were blocking light and designed outdoor spaces around the remainder. The gardens today are packed full of original, gigantic palms and Jackwood trees, and sunlight floods through to the ground where we have planted new exotic flowers, shrubs and Frangipanee. 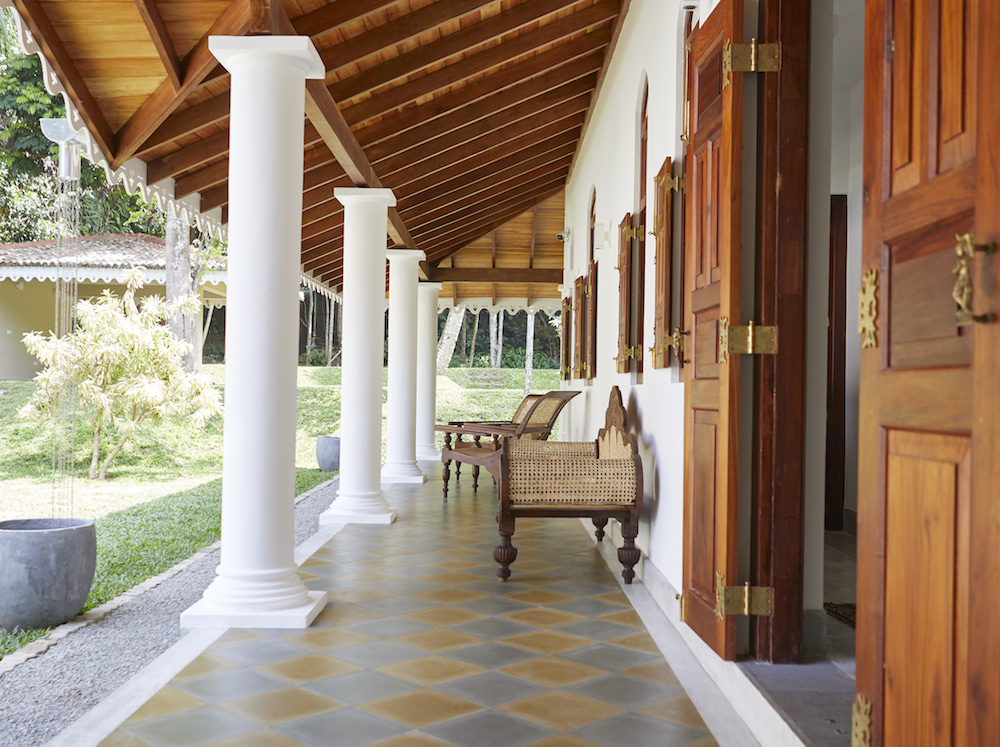 Image caption: The hotel has a distinct residential style that is both luxurious and thoughtful.

Working with the footprint of the original bungalow was crucial. Rather than cramming lots of small rooms in as was suggested (bums on seats), we created two levels and carved off half the space for a large double height, vaulted living area which would stay cool naturally, and the other half for four lovely bedrooms with en-suite bathrooms. We installed the refurbished doors, shutters and windows from the original property back into similar locations and had additional ones handmade by local craftsmen from local, sustainable sources.

We have a natural water well and that water is used to irrigate the gardens. If the well runs dry when it is particularly hot, then the gardens go without. The original jungle has been there for centuries without being watered and we chose beautiful but hardy plants that could withstand extreme weather patterns. It was one of hundreds of decisions we debated – how to balance finances, sustainable design and luxury market expectations. 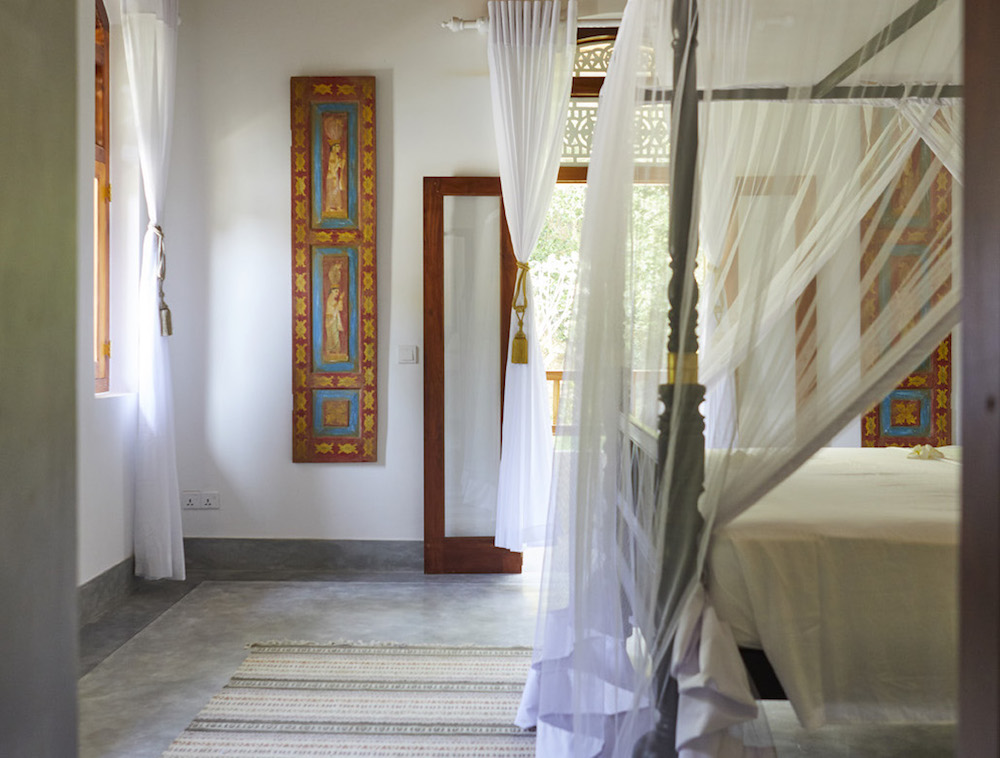 Image caption: The bedrooms shelter a traditional look and feel with hidden technology keeping it relevant for the luxury market

Powerful hot showers are a personal must have for comfortable, luxury travel and the electricity for this comes from solar panels. The Grohe fittings are expensive in Sri Lanka but the thought of having cheaper, mass produced variants was not an option. In a hot country like Sri Lanka there are times when the heat can be intense, so we have installed fast, efficient high-tech AC units in the bedrooms in addition to ceiling fans, and we actively ask and encourage guests to use the fans where possible and be mindful of the impact on the environment.

Our future plans include switching over entirely to solar power, but frequent power cuts will mean we still have to rely on our generator.

The hotel is styled with antiques that are all in daily use, and individually selected based on how they stirred us emotionally. We used a local antique dealer who had stories to tell of his life including where he was on the day of the Tsunami in 2004. These human connections and stories of provenance added layers of interest and emotion into the process. 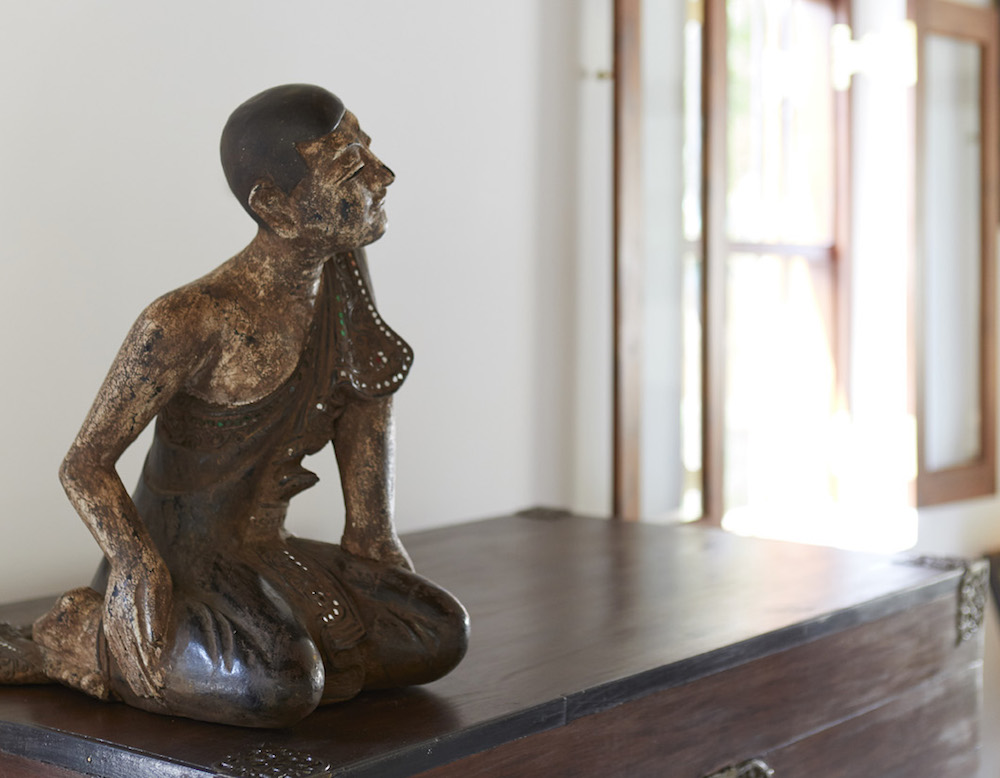 Image caption: The hotel used a local antiques dealer when styling the interiors 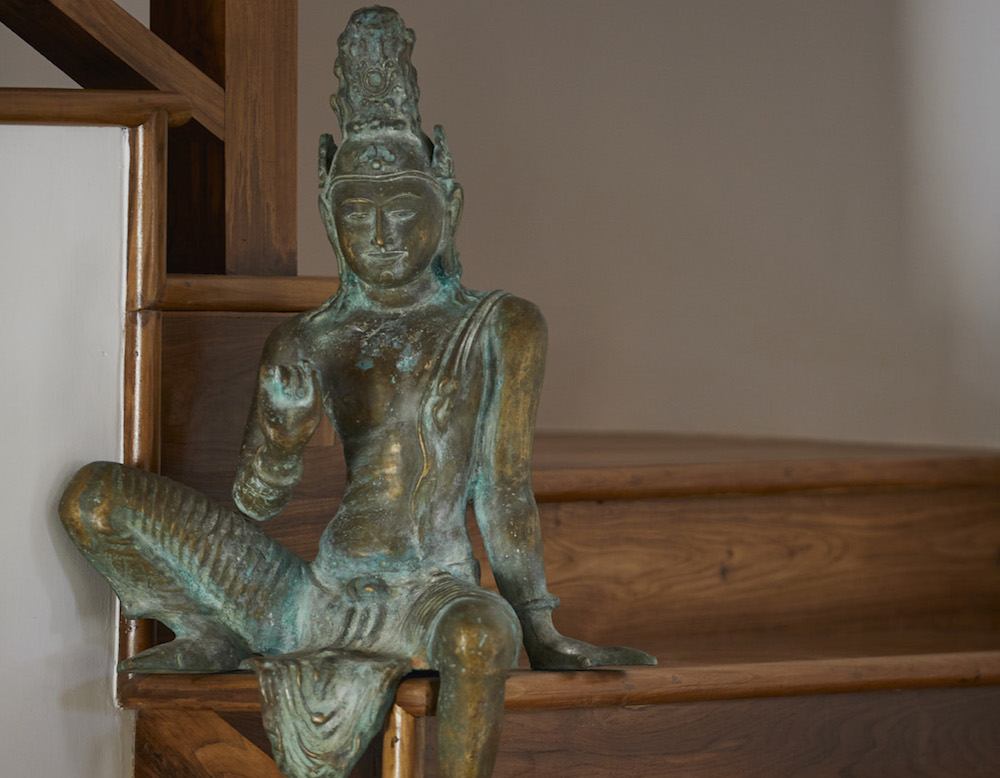 Image caption: The hotel used a local antiques dealer when styling the interiors

Other craftsmen hand carved furniture for us, and we consciously sought out Sri Lankan artisans instead of mass produced, replica retailers. The entire space breathes and pieces are installed for specific use, their inherent beauty and details are styling enough. Carvings and statues add a sense of nostalgia, these too are minimal so they can be admired. 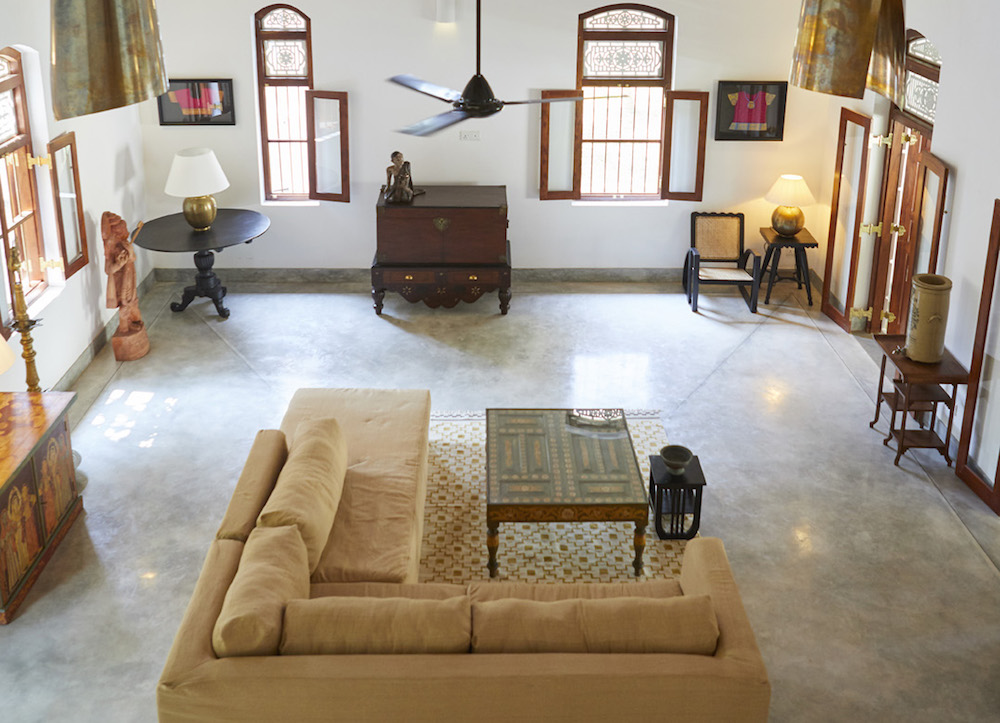 Image caption: The interior design scheme inside the hotel evokes a strong sense-of-place and time

Having regular contact with the contractors meant that I could see the hotel going up brick by brick. Our Sri Lankan builders had knowledge of local building techniques as well as modern materials, they used labourers from local streets to help on smaller tasks and we retained the caretaker who had looked after the site before we bought it. Relationships were built and strengthened, our presence in the village has roots.

Every detail was considered, from drainage and irrigation to power sources and building materials, and contractors, craftsmen and staff. It took time and effort and since opening, there are costs associated with maintenance, but the hotel has been built responsibly and with authenticity.

Sustainability is an on going project for us. We share our story with guests and engage them as much as possible to join in by making conscious choices on meal ingredients, water and electricity consumption and even local experiences. Our toiletries are all organic and every bathroom has china bottles that are topped up with products. Single use plastic is down to less than five per cent and we are always thinking about what we can do to improve.

We are asking that all guests go on at least one of our experiences where we encourage a human connection with locals. We also have strong links with a local children’s charity who we support through donations from guest bookings and other means.

Our staff are trained to be discrete while attentive and they are encouraged to warmly interact with guests if it feels appropriate, recreating those moments of connection we had with various people when building Kalukanda House.

All of this brings the guest experience into a deep sense of connection with the provenance and values of the hotel, the people, and the environment. Guests want to actively participate in our sustainability and green initiatives and ask about this when booking to stay.

Designers and hoteliers must insist on thinking about a design approach that is both conscious, emotional and sustainable. Whether in Sri Lanka or anywhere else, we can use our influence to create engagement between users and their environment, as this is the beginning of a journey to good mental health, wellbeing and thinking about our world in a kinder and respectful way.

Over complicated technology, throw away fixtures and faddish design aesthetics result in buzzes that are easily forgotten, and an un-conscious lack of respect for the environment.

The Kalukanda House definition of luxury is having the time and means to engage at a human level, to savour every pleasure our senses can find and to leave a positive social impact on the space we leave behind. That word ‘conscious’ is the golden key to sustainable and timeless design.