First look: ACME completes work on first room of £76 million Canopy by Hilton hotel project in the City of London 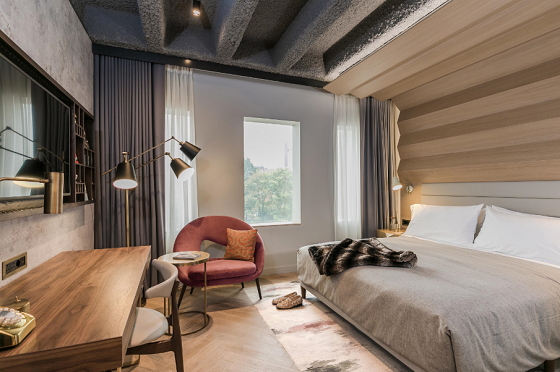 ACME design studios have unveiled the look and style of the first room from the new Canopy by Hilton hotel project in the City of London.

The landmark expansion in the heart of the City has been described as “part refurbishment, part new construction” and takes its inspiration from the City’s cultural and historic capital.

The first look at the design appears brutal and industrial, with the eponymous treetop canopies lending softness from the window. Furnishings are modern and in rich, earthy tones and parquet wood flooring is underfoot.

The Canopy by Hilton brand can also be found in Reykjavik, Iceland.  It’s the Hilton’s way of saying they’ve learnt about the demands of the modern traveler: out with anonymous colours, textures and patterns, in with a more personalised design reflecting the local community.

The hotel draws on the Jewish and Bangladeshi immigrants who moved to Aldgate in the 19th and 20th Centuries, while respecting the modernist frame of the building, by exposing the concrete framework (typical of the period) wherever possible.

Bespoke furniture and fabrics have been developed for the hotel. Some of which lay as bedspreads, while others form the chaise longue, cushions, chairs and lights.

Aldgate also has a rich publishing history, which inspires the design. Freedom Press, an anarchist publisher, set up in Aldgate in 1886, and the Whitechapel Art Gallery opened in 1901. So the hotel have put individual letterpress trays in every room, filled with work from local artists, and objects from Petticoat Lane Market.

Dais Contemporary studios have also provided artwork for the bedrooms and public areas of the property, which have been inspired by the local area.

Friedrich Ludewig, ACME’s Director explained: “The original 1977 building with its complex facade has been a great stage to work within. Each of the new fixtures and fittings for the guest room have been developed using local Aldgate and Whitechapel references, creating a guest experience rooted in the history of context of East London.”