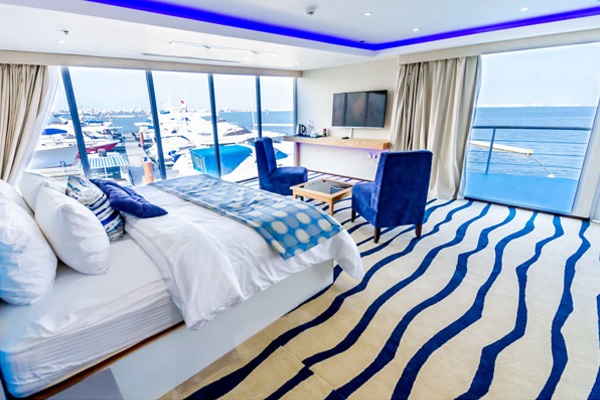 Bahrain’s first floating hotel was officially opened at the weekend (May 15th) in the capital city Manama’s Coral Bay.

The $5 million, five-star C-Hotel is built on the base of an old houseboat and contains 14 rooms, two of which are large suites. While the hotel floats while anchored, an automatic gliding bridge connects the hotel to Coral Bay’s facilities.

The boutique hotel is part of the Hotel des Charmes group, which specialises in luxury boutique hotels around the world, and features predominantly Italian design.

The C-Hotel is the brainchild of Seven Leisure Group owner Akram Miknas who told the local Gulf Daily News that he got the idea when he bought a houseboat for personal use.

“I bought the boat from a prominent family in Bahrain and decided to convert it into a luxury hotel on a docked boat. It took us three years to make the changes, including designs approved by a marine architect, Italian interior décor, furniture, and other facilities in the rooms,” he said.

The C-hotel had a soft launch in December and has since averaged 80 per cent occupancy.