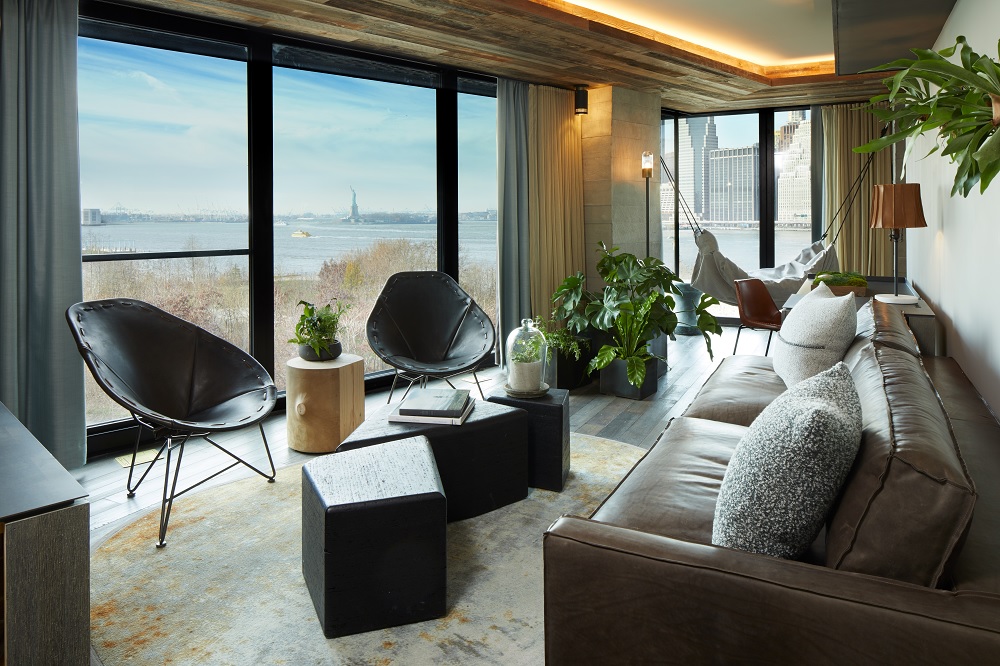 1 Hotels has opened the doors of its third property and first ground-up development, 1 Hotel Brooklyn Bridge. Remaining true to 1 Hotels founder Barry Sternlicht’s core philosophy; ‘the world around us is beautiful, and we want to keep it that way.’ The property cultivates the best of eco-conscious design, sustainable architecture, cause-oriented partnerships, and unrivaled service.

Situated at Pier 1, just south of the iconic Brooklyn Bridge, in Brooklyn Bridge Park with sweeping waterfront views of the Manhattan skyline and the Statue of Liberty, 1 Hotel Brooklyn Bridge was developed by a joint venture partnership between Starwood Capital Group and Toll Brothers City Living, and it was designed by New York-based architecture studio, INC Architecture & Design. 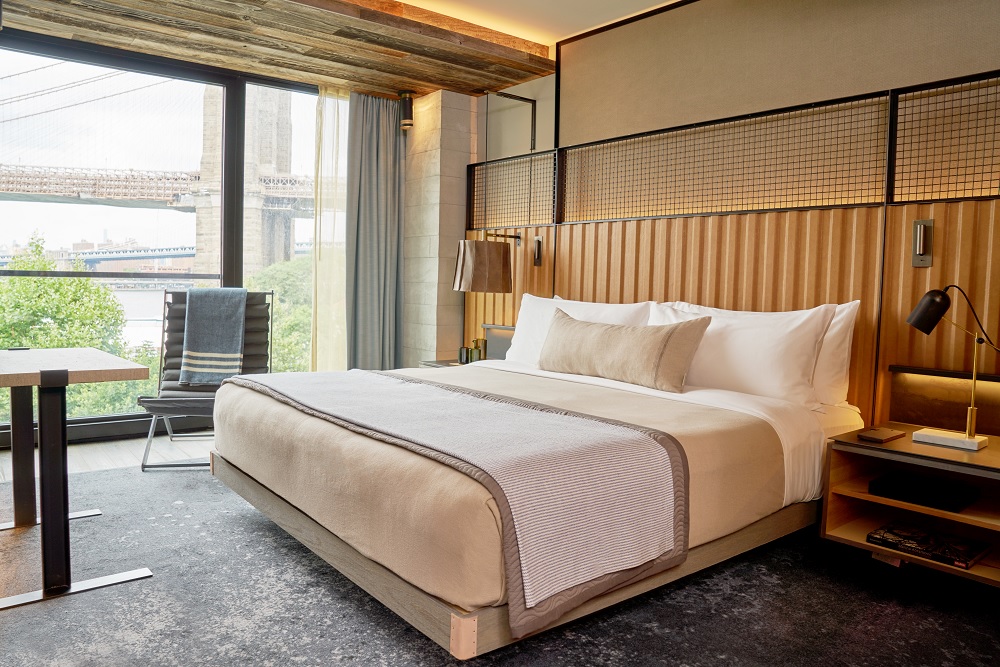 The property features 194 guest rooms, including 29 two-to-six-bedroom suites and The Riverhouse, its Presidential Suite, with most rooms offering panoramic views of the East River, the Brooklyn Bridge and the New York City skyline. The project also includes the adjoining new condominium, Pierhouse, which consists of 106 townhome-style residences spread across two waterfront buildings and is sustainably and beautifully designed by Marvel Architects. 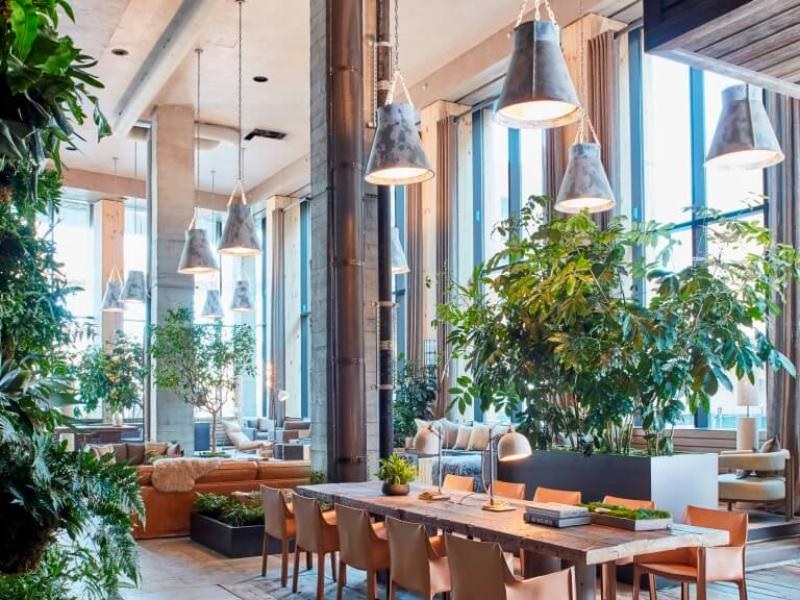 “Confronted with how far Americans were lagging behind in changing our consumption habits, I created 1 Hotels to show sophisticated travelers that they can do good, live well, and connect with both the world and the community around them,” said Barry Sternlicht, 1 Hotels Founder and the Chairman and CEO of Starwood Capital Group. “Today, with the opening of 1 Hotel Brooklyn Bridge, my vision is now realised. We were able to select every material and develop mindfully, yet the space’s main purpose remains to serve, entertain and inspire with some of the best amenities found in the New York hospitality market.”

Narrated by Nature
The 10-storey hotel occupies Pier 1 in Brooklyn Bridge Park, an 85-acre beautification project that stretches 1.3 miles along the East River waterfront. The hotel project originally began in late-2011, however when Hurricane Sandy hit the East Coast in 2012, 1 Hotel’s architectural drawings for the Brooklyn Bridge property had just been completed. Due to the damage and destruction, the team was informed the waterfront zoning had changed, requiring 1 Hotels to raise the building by three feet along with other code changes such as relocating mechanical equipment to the roof. Meanwhile, they could not raise the overall height of the building, which triggered a massive redesign effort.

Rather than whitewashing the delay and changes caused by Sandy, the 1 Hotels team opted to honor the force of nature by tapping Olivié Ponce, an artist and creator in Bushwick, Brooklyn, to paint a watermark in remembrance of Hurricane Sandy along the walls of the corner suites. 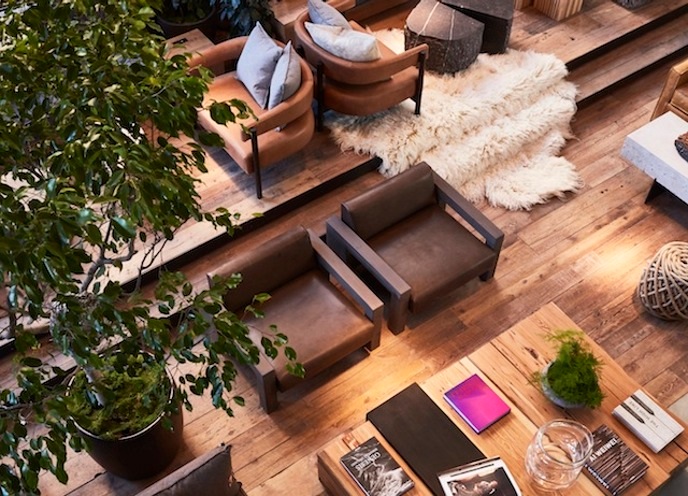 Committed to sustainability and preserving the environment, 1 Hotel Brooklyn Bridge was built under LEED® guidelines and underscores the following efforts:
– The design of the hotel features a 54 percent ratio of regional and reclaimed materials, including original heart pine beams from the former Domino Sugar Factory, walnut from the Brooklyn Botanical Gardens and pine flooring from the Old Crow Distillery in Kentucky.
– The hotel will eventually boast a LEED Dynamic Plaque™ which will measure and display the building’s eco-conscious practices in real time.
– 1 Hotel Brooklyn Bridge operates a rain-water reclamation system that will reduce storm water runoff into neighboring water streams by more than 50 percent prior to the site development. The water collected will irrigate the park during summer months. (Roughly 5,000 cubic feet of water is projected to come from the hotel.)
– The property uses 100 percent wind power energy.
– The hotel features low-energy light bulbs, a Triple Clear water purification system, in-room recycling bins, and fresh dining offerings.
– 1 Hotels has committed to donating a percentage of sales from in-room dining and goodthings (the hotel’s mini bar) to Action Against Hunger, a global humanitarian organisation that takes decisive action against the causes and effects of hunger.
– The hotel features a nature-driven art collection, including a textured rubber sculpture, “All OVEREACHOTHER,” created by Jarrod Beck from massive rubber pieces of roofing that were stripped from a big box retailer’s roof during a tornado that touched down unexpectedly in Utica (Upstate New York) in the summer of 2014. 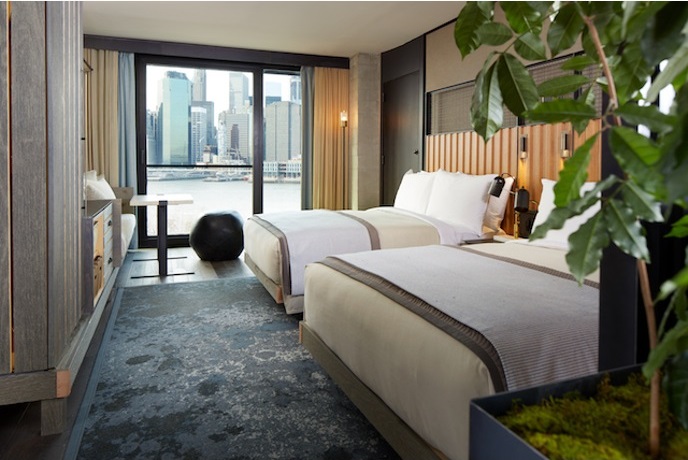 Rooms & Suites with a Lady Liberty View
The interiors of the 194 guest rooms and suites were designed to honor the historical significance of one of world’s busiest waterways—the East River. The most stunning feature is a sleek floor-to-ceiling sliding window that transforms the guestroom into an open-air den with skyline views of Manhattan and the Statue of Liberty. Furnishings include a porous stone-looking table of composite wood, leather chairs and pendant leather lampshades. Many of the design details in the rooms are by local artisans, from the “crate” inspired, open-slatted wood closets, corrugated leather headboards, to the Fresnel glass light fixtures. 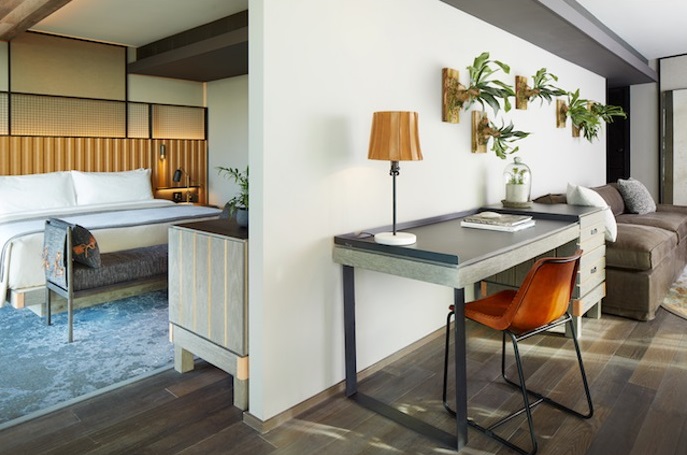