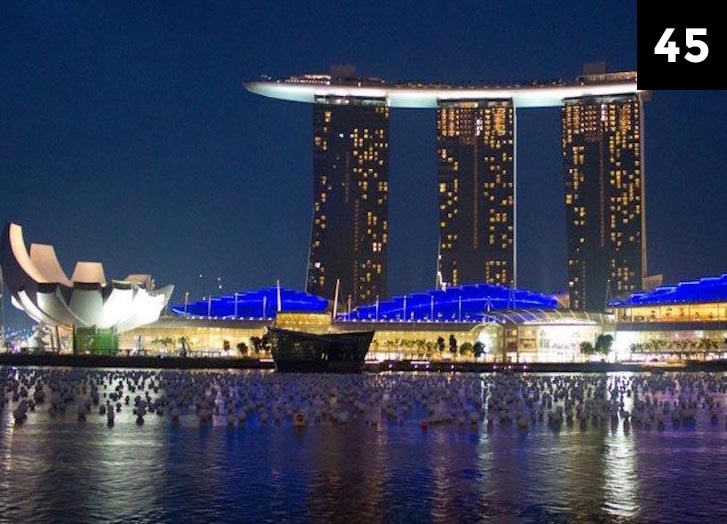 The almost all pervasive use of a standardised approach to the construction of medium height and tall buildings does not help with differentiation; a key attribute for any hotel as first impressions are vital. The skilful application of façade lighting can help a great deal, as the LED lighting specialists at Illumination Physics explain… 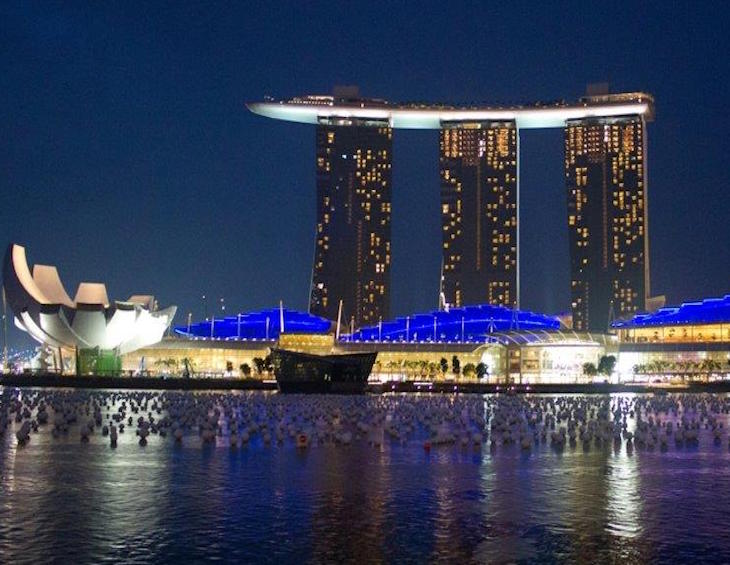 The use of glass and aluminium in unitised or non-unitised curtain wall construction is pervasive in most modern facades for reasons of cost, performance, and speed of construction: The advantages are irrefutable. However, the facades all look inevitably similar.

Older or more classical hotel designs that do not use all glass facades and use stone and other non-reflective surfaces present an entirely different challenge.

The properties of a double glazed glass panel is determined by factors such as wind load and these dictate the width of the vision glass. There is a magic number of approximately 1500mm between the vertical metal mullions and varies only a little around the world. Any wider; the glass has to be thicker and stronger (and more expensive). Any narrower and the windows seem claustrophobic and the amount of metalwork increases (and is more expensive).

The vertical distance between floors (slab to slab), is also driven by a magic number. High ceilings may be spacious but they cost more because less floors can be built in a certain rise. As a consequence the height of a floor, and hence the height of a curtain wall panel will be somewhere between 3.5 and 3.8 metres. Part of the panel will been to be a window and part will need to be opaque to hide the edge of the slab (the spandrel panel).

Architects and façade consultants strive to achieve any elaboration that is possible with all types of glass and metal structures, but to casual observers, there is a strong resemblance between edifices of many types because the texture is the same.

Hotels, perhaps more than any other genre of building, need to exude a personality and should differentiate themselves from each other and other similar modern structures in the vicinity. The curtain wall system can make it difficult to discern a building as a hotel or an office sometimes.

To illustrate this potential, the following examples demonstrate projects in which façade lighting has helped to develop and articulate the personality of four very different hotels. All of the projects are constructed with modern façade technology and each of them have developed their character through lighting.

The DoubleTree Hilton in Zagreb, Croatia

Wooden fins on a modern glass building is novel, but provided a striking visual element in daylight, adding interest to the facade. At night the effect was lost, unlit the fins became just shadows. The night time interest was restored by integrating a small custom LED light fixture into the base of each fin. The same width as the fin, the light fixture goes unnoticed by day. After dusk however, it provides an eye catching display that uses subtle warm white and cool white light in a dynamic display, without resorting to coloured light. This was suitable artistic restraint that suited this location. 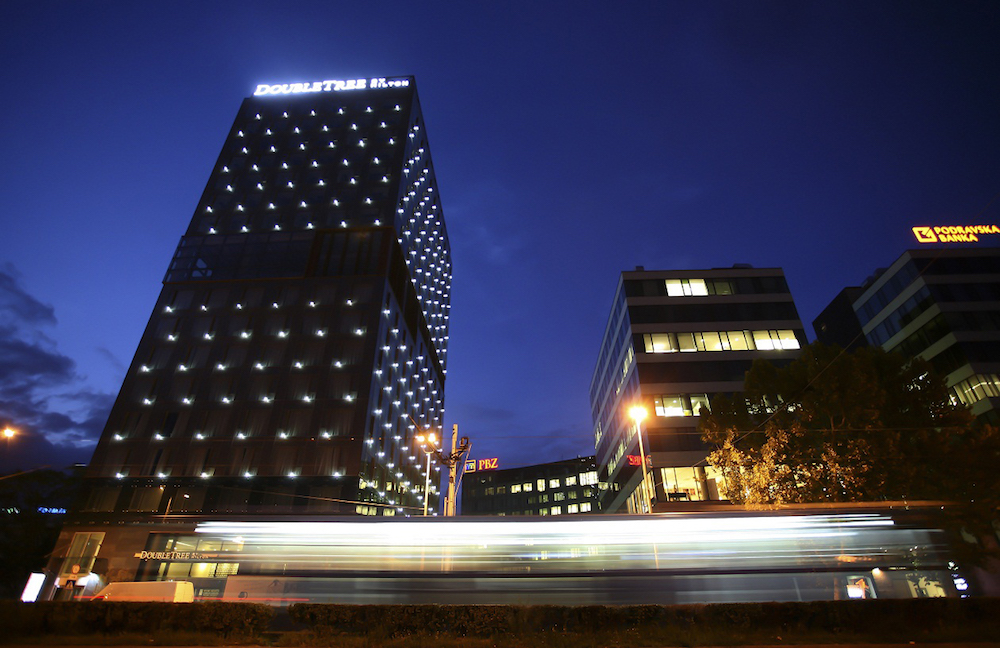 The building is now clearly not an office tower. The lighting display is playful but sophisticated. An ideal message for the positioning of this hotel.

Technically simple, cost effective and totally reliable. The equipment was installed by the electrical contractor with guidance from illumination Physics.

The retail expansion of the podium in 2015 produced a new 250m wide curved façade, 20 metres high, constructed of glass and aluminium. City of Dreams contained four hotels at that time and a casino. The expansion was a major development of the Cotai Strip and a statement needed to be made. Lighting would be the key for that message. 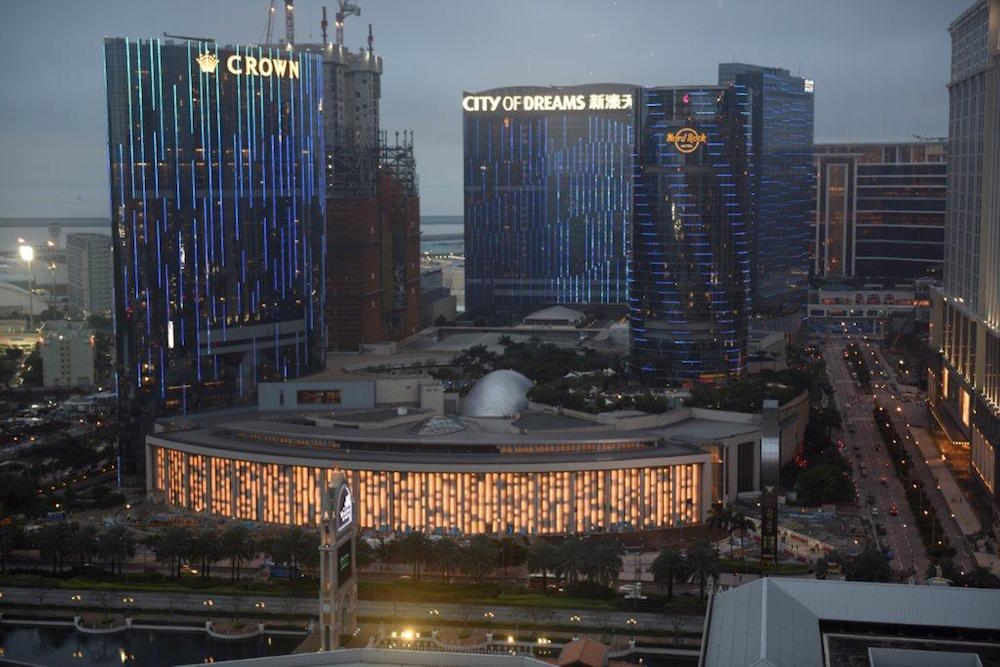 Image caption: The new retail façade of City of Dreams now dominates the start of the Cotai Strip in Macau. The use of very warm white light and cool white light are used as a metaphor for gold and silver in a display that is constantly evolving. Design and build by illumination Physics.

The signature use of highly coloured neon and now LED have been all pervasive in Macau since the 60s.  Those hotel personality messages are unmistakeable.

The new podium at City of Dreams should be treated differently. It would need to demand attention, overt; but not in red, green and blue colour mixing. There is already too much of that. The image of the retail expansion also needed to be distinctly up-market and for once, primary colours would not help.

A different approach would be the one to stand out. The 90 tall light boxes would be illuminated by washing the back panel with two offset focuses, one in very warm white (gold) and one in very cool white (silver) as a metaphor. A custom linear light fixture was specially created. The display is animated and demands attention but the dynamic changes are neither fast nor slow, creating an image of class in deference to the high-end retail brands contained within. The building demands attention and yet clearly communicates its personality.

Designed by Moshe Safdie Architects, the three iconic towers joined at the summits by the Skypark have become the contemporary image of Singapore. These were not the only opportunity to create a personality, or many personalities as it turned out. The hotel towers needed little help.

However, at the base of the towers sit three wide low buildings; The Theater, The Exhibition Hall and the MICE centre. The creative company Laservision had identified that the acres of grey convex Clip-Loc aluminium roofing, whist not an asset in day time, might be exploited at night.

illumination Physics developed a luminaire design that was able to evenly illuminate the compound curved surfaces. The overall display utilised more than 1000 custom light fixtures that were among the first to adopt RGBA (red, green, blue & amber) LEDs rather than the more prevalent RGB or RGBW (red, green, blue & white). The inclusion of amber allowed the creation of a true warm white – a specific requirement of the architect, as well as a palate of colours previously unseen. Dynamic control grants the Sands the ability to adopt many personalities and moods according to the time of day and special events such as Singapore’s National Day when the red and white colours of the flag are used.

It gets very cold in this part of the world (the average annual daily temperature is 8.9℃) and hence the sporting, spa and pool facilities must be indoors and yet feel spacious and open. It was logical that Novum structures would provide two organically shaped self-supporting glass and steel geodetic domes. This magnificent engineering would be lost at night unless it was celebrated with lighting, which is what illumination Physics did. Each node in the dome was equipped with a direct view LED pixel, a custom designed luminaire that was integrated into the structure at each node. In addition, linear indirect wash lights were installed, hidden around the perimeter of each dome.

The combination of these two light sources creates two views of the domes. From the inside a sky can be created complete with stars. From the outside the glowing domes arouse curiosity and attract attention in a way that invites people in to places of warmth and relaxation. Ideal for this hotel.

The square peg and round hole issue

illumination Physics was founded on a specific philosophy. illumination Physics would focus on the exact needs of the project above all else. Integrated architectural lighting requires that the design of lighting equipment must be perfectly adapted for fit and function and also maintainability. Custom design played a key role in the success of all of these hotel based projects. Our manufacturing facilities are organised for agility and flexibility so that a particular type of light fixture can be designed, proven and produced as, if not more quickly than an off-the- shelf product. The support for illumination Physics’ products has extended for a decade and the company have debunked the popular myth that custom products are more expensive. Illumination Physics apply the same level of care to projects large and small.

Illumination Physics is one of the brands that has taken advantage of our Industry Support Package. To keep up to date with supplier news, click here. And, if you are interested in also benefitting from this  three-month editorial package, please email Katy Phillips by clicking here.