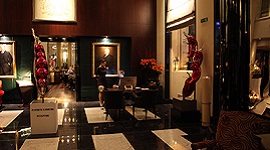 I have reviewed a Sofitel before – the Sofitel Hamburg. It was an hotel I found very difficult to like; the décor was cool and minimalist, grey and indeterminate, lacking (it seemed to me) in the air of opulence and luxury that I expect from a five star hotel. Having designed such establishments, I know the kind of design cues needed to create the right ambience, and as Hamburg fell short, I had mixed expectations of the St. James’s property.

The location is right at the bottom of Waterloo Place, close to the Institute of Directors and in the heart of London. The building used to be a bank and it has a good street presence, fitting for a 5 star hotel. From the outside at least I was not disappointed, its late Victorian portico entrance an agreeable part of the mosaic of grandeur that makes up this area of town.

Looking to the side of the lobby opposite the Reception desk, towards the restaurant and bar – click tosee the nicely done reception desk

I’ve always thought of St. James’s as the part further down, around the palace, but the hotel adopts that name rather than associate itself with Waterloo – a name unacceptable to the French even today – or with, perhaps, Haymarket and its theatres. Haymarket and its link with the theatrical demi-monde is perhaps too louche for the kind of associations the hotel wants in defining its luxury appeal to its desired clientèle. Instead, the operator creates its own sense of upmarket theatre.

Starting with the smart, smiling, top-hatted doorman, the sense of theatre is enhanced by a glass screen inside the doors. Illuminated, passing this allows the guest to experience the revelation of the lobby as if a stage curtain had been raised.

The reception desk is on one side, the splendidly design restaurant on the other behind an informal service desk. An exhibition of slightly kitsch decorative sculpture in the lobby was stopped from dominating by a very theatrical floral display. The theatricality was reinforced in the evening by the introduction of candle lanterns, the normal lighting being subtly adjusted.

The screen inside the front door acts as a sound and draught baffle. Internally lit the script details the history of the building, Click to see the impressive exterior from Waterloo Place