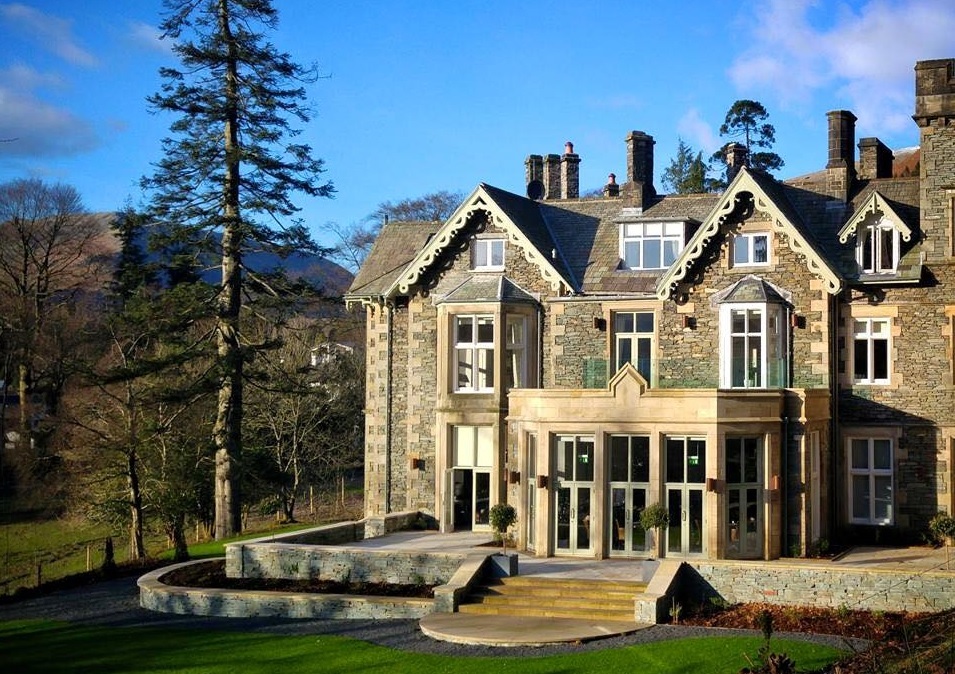 For those of us in the know, the Lake District needs little introduction. Indeed, sometimes, there are no words to capture its outstanding beauty.

For the rest, yet to discover its delights first-hand, I can only urge a visit to find out why this is the case – its stunning landscape, quaint villages and air of tranquil solitariness have been captured perfectly by the immortal words of Wordsworth, Landon and Procter far better than I could ever hope to attempt here. 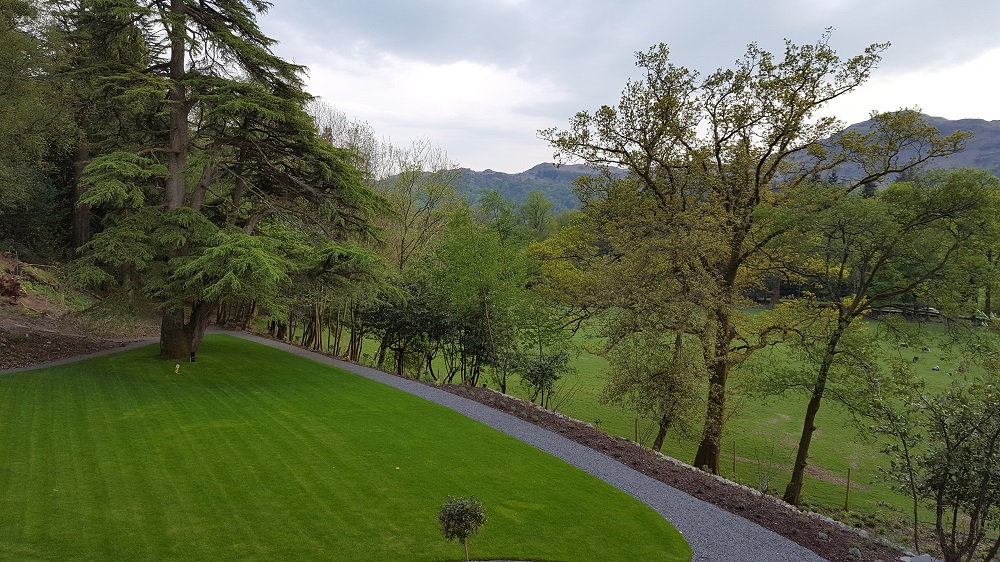 So, it was with great pleasure I was invited to dine and stay at the newly-refurbished Forest Side Hotel in Grasmere – the third property in the portfolio of affable and mild-mannered hotelier Andrew Wildsmith. Forest Side, which has joined Hipping Hall in Kirkby Lonsdale and The Ryebeck in Bowness in his eponymous collection, is a fantastic base for discovering just how accurate Lakes-native William Wordsworth’s love-letters to the district still are.

Set amongst craggy mountains and serene lakeside grounds this former Victorian manor home – tucked away from the main road, which had just reopened during my visit after the damaging floods earlier in the year – oozes presence on arrival. I’m welcomed at a simple reception desk and then get a chance to spot the impressive main staircase and the various rooms that break off the main atrium – namely the bar, lounge and the hotel’s fantastic restaurant. (FULL REVIEW HERE) 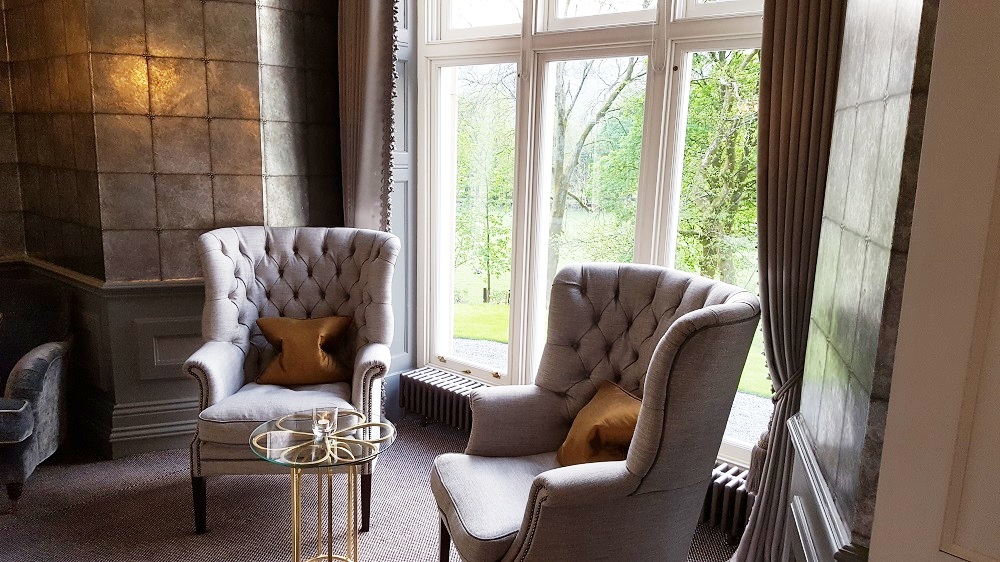 Andrew later tells me that the building was first surveyed in the autumn of 2013 after an online search and purchased in the summer of 2014 – with the kitchen requiring a complete re-equipment and refit and the small bedrooms needing to be repurposed to restore them to their original size. The latter has been done with great aplomb. My ‘Master’ room is incredibly spacious, luxuriously and tastefully furnished with predominantly light hues by HD Directory members Zoffany; and drenched in natural light thanks to the elegantly-dressed, period-style windows (all 80 of which in the property, I later read, were painstakingly installed). My only gripe would be with the placement of the television in relation to the location of sofas and chairs, it has been rather awkwardly placed in a corner and comes across as an afterthought. 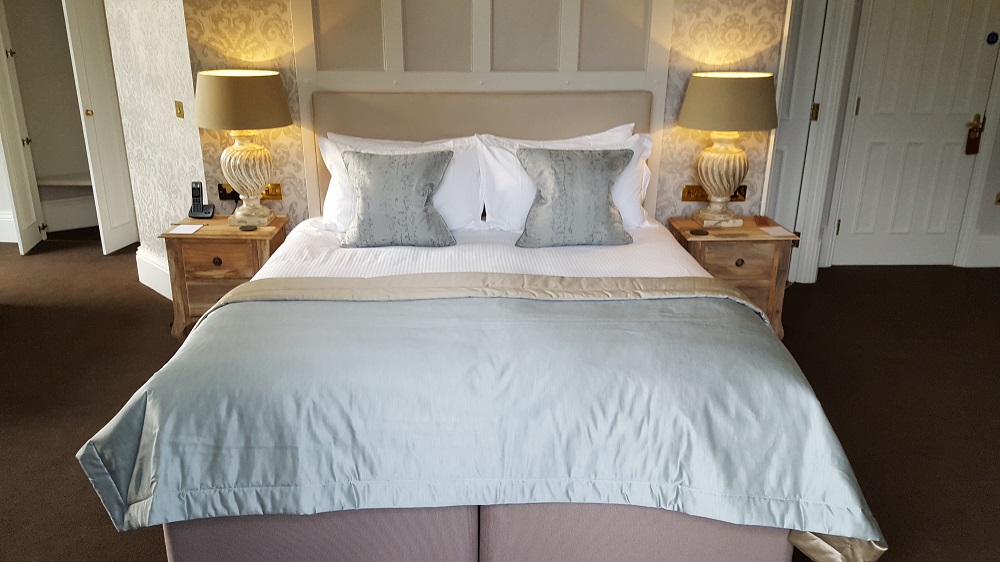 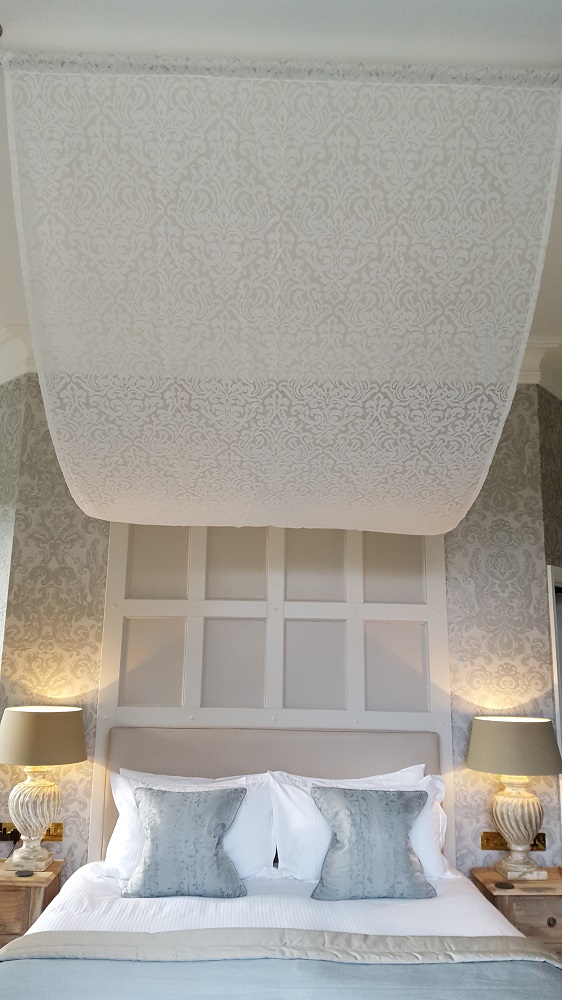 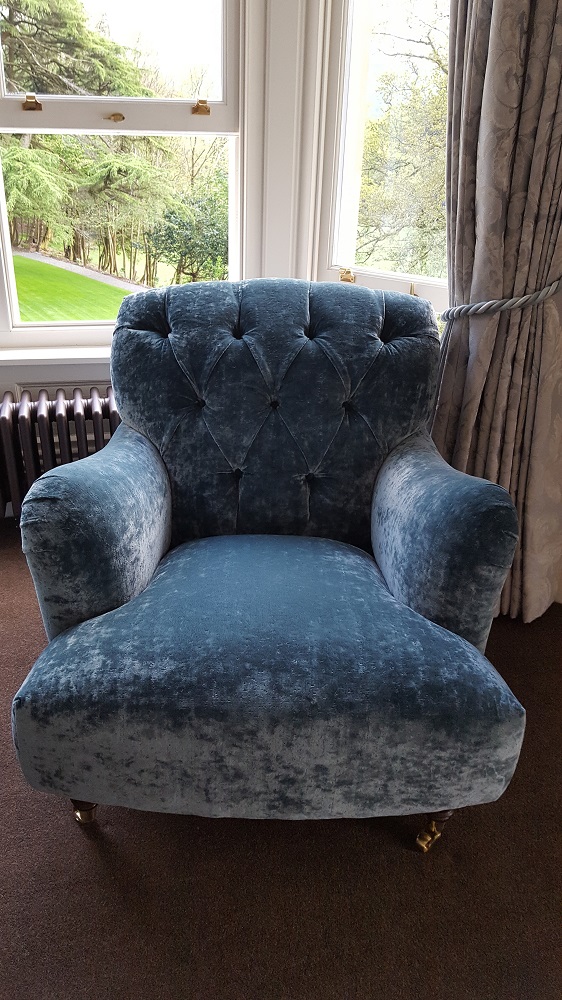 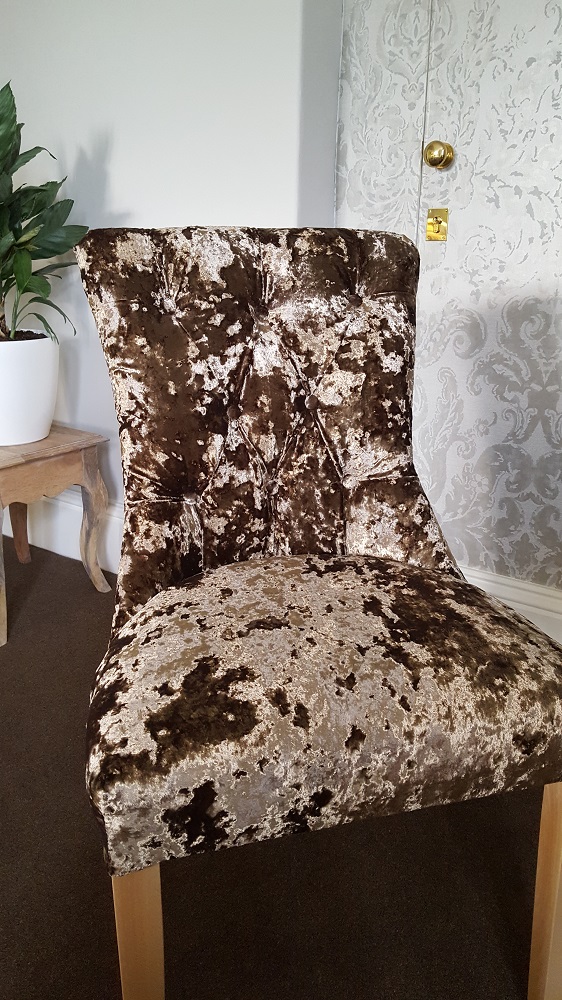 But the attention to detail throughout, from the furniture choices (think custom-made Harrison Spinks beds), heritage-inspired upholstery and fabrics to the wonderfully simple but elegantly functional finish in the bathroom – the push-button thermostatic mixer for concealed outlets on the bath and shower by HD partner Hansgrohe a definite stand-out – all endorse the skills of an interior designer with an eye for modern luxury as well as the hotel’s bucolic surroundings. 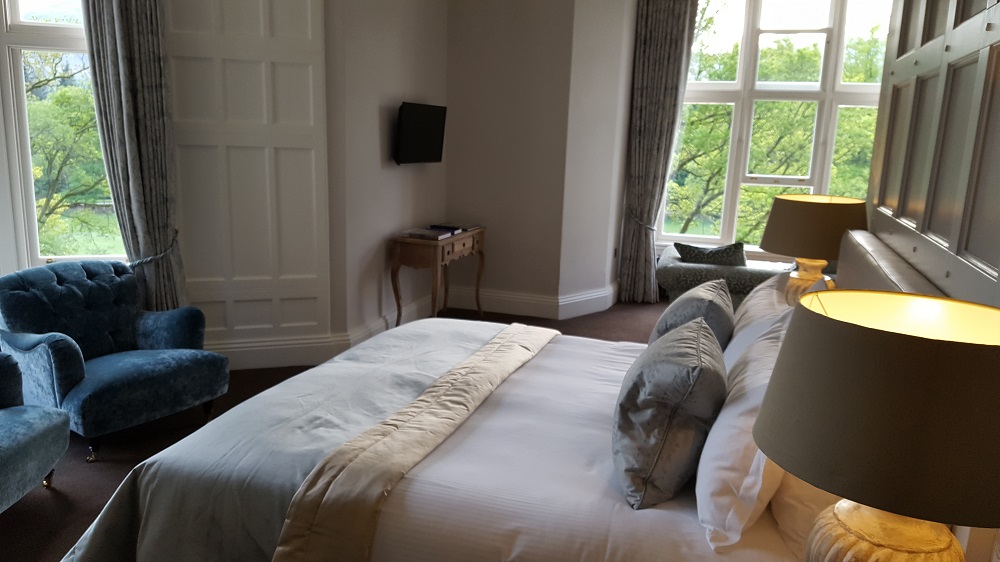 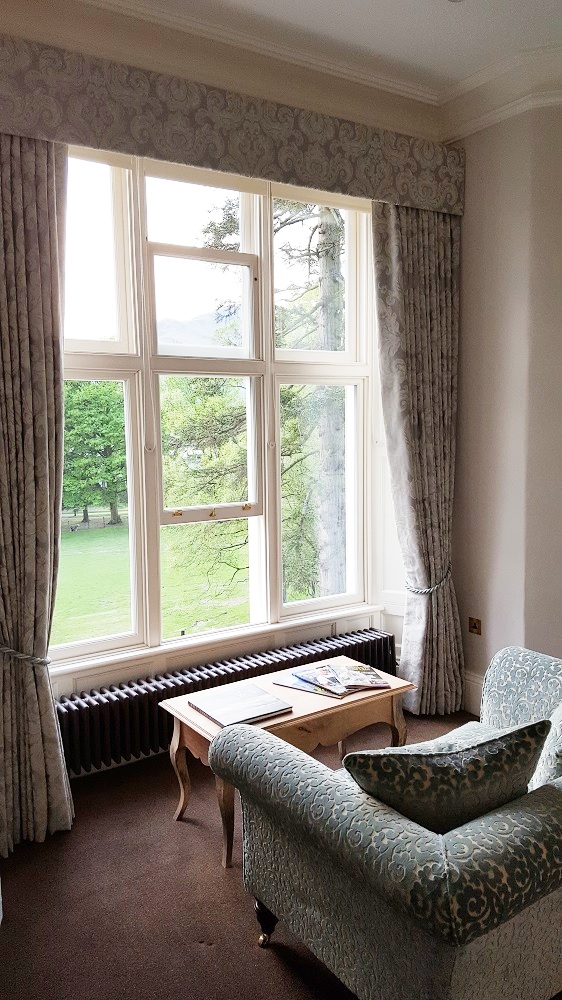 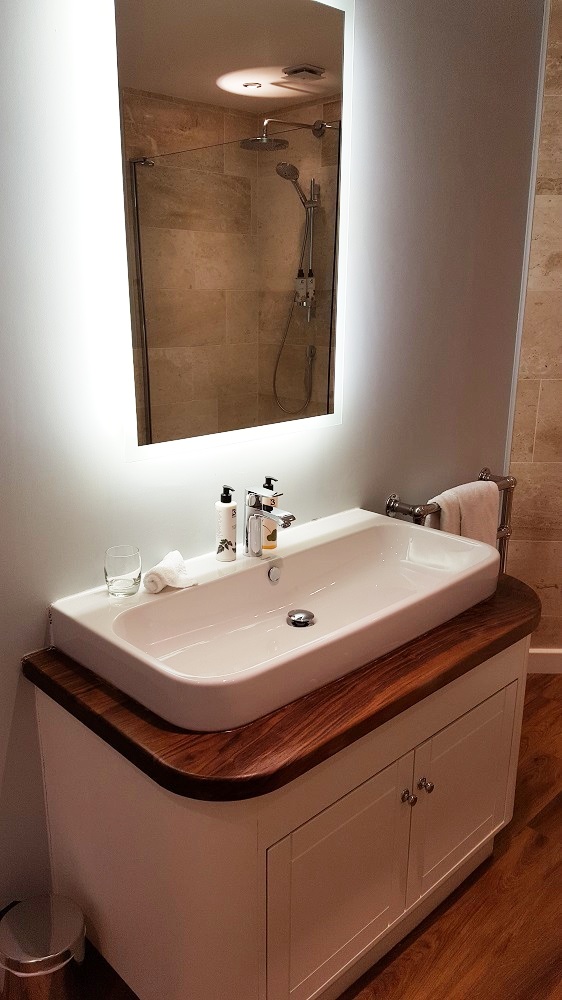 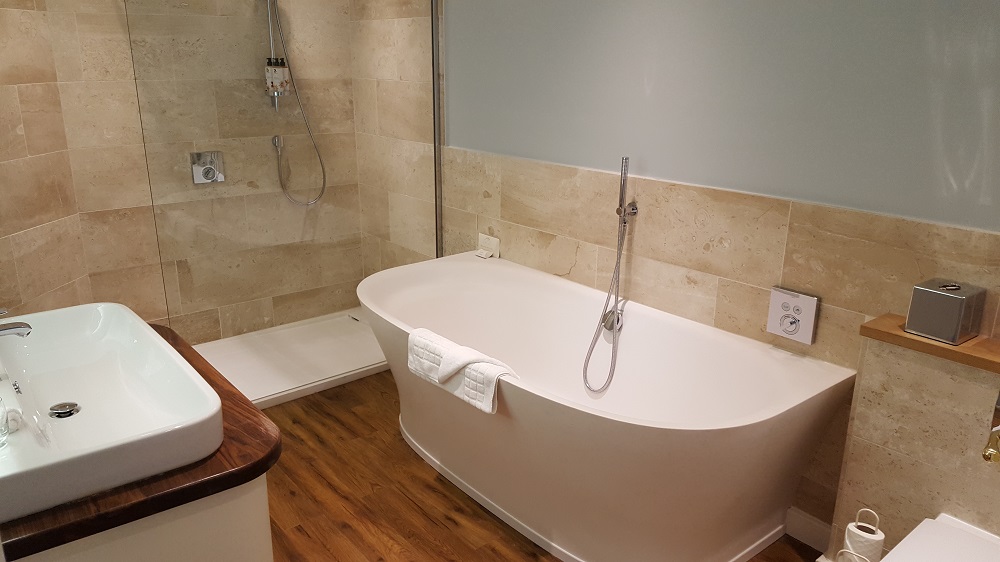 Indeed, James Mackie’s locally-inspired touch is to be found throughout all the Forest Side’s rooms. A perfect example of this? I read all the carpets are sourced from the local Herdwick breed of sheep and the entire hotel’s order totalled 2,000 fleeces from Wools of Cumbria. 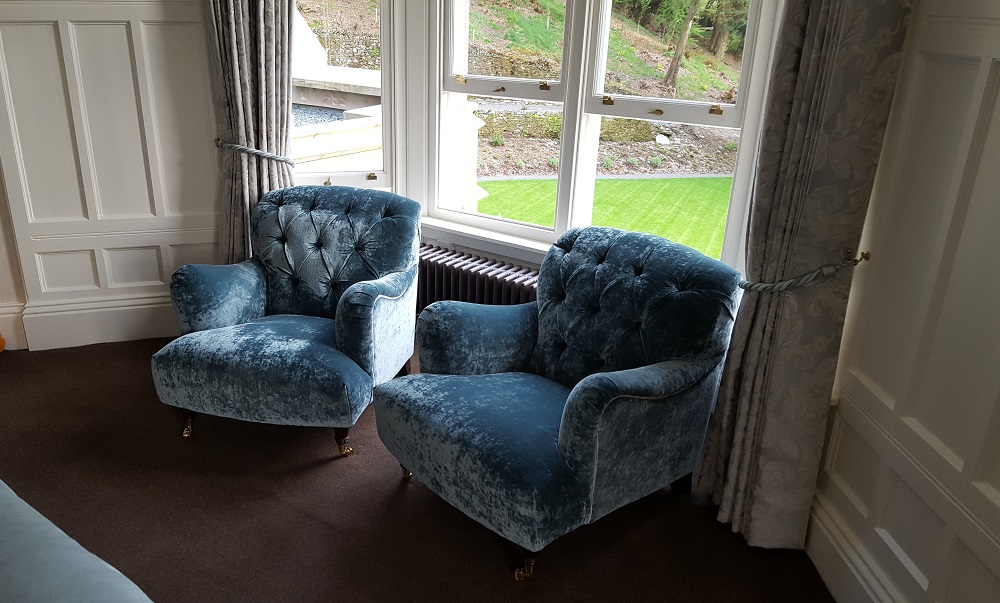 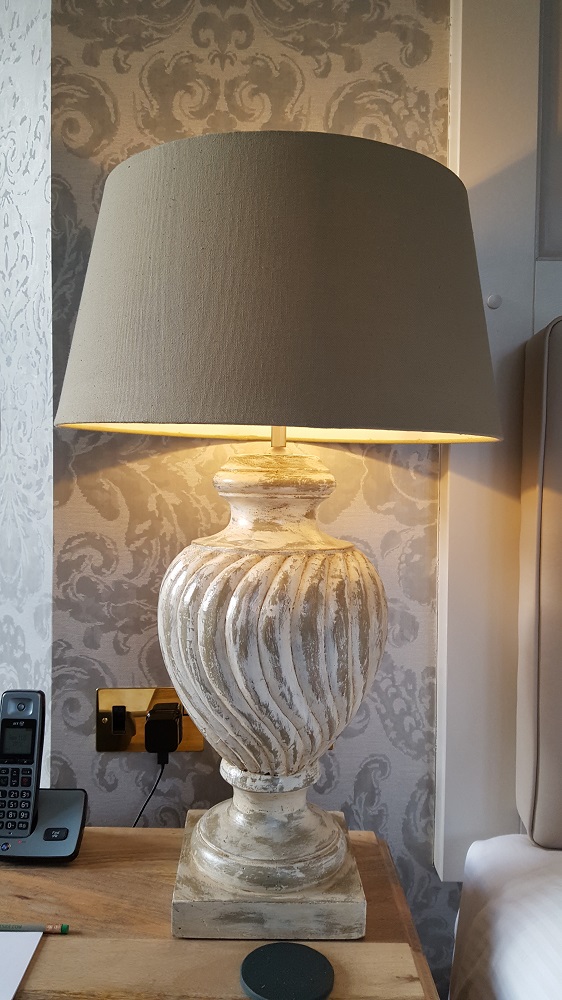 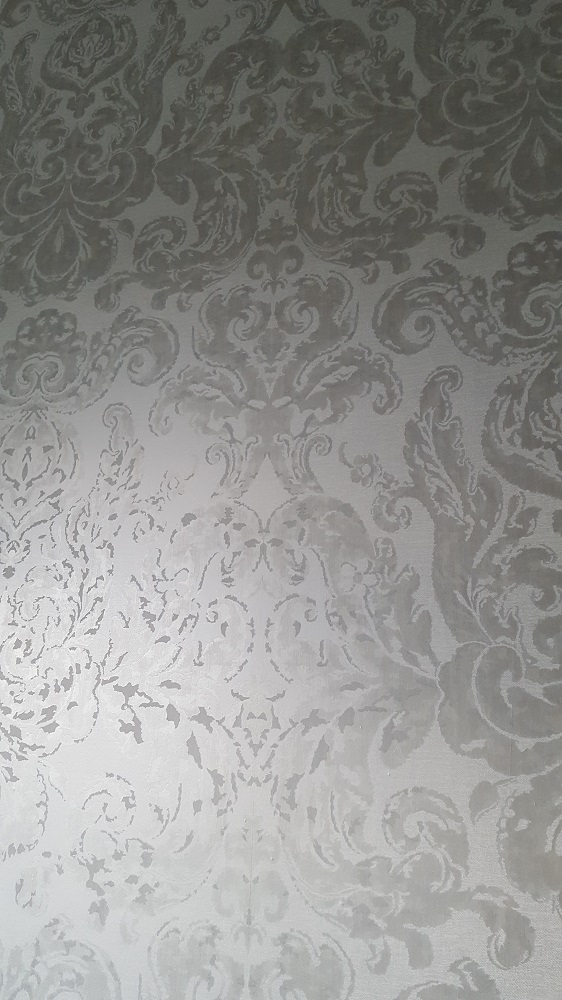 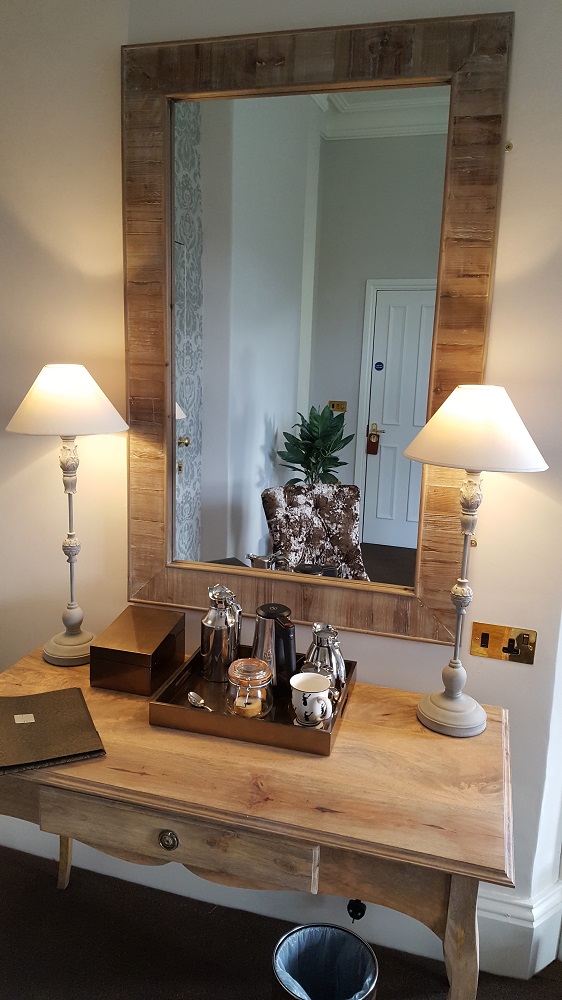 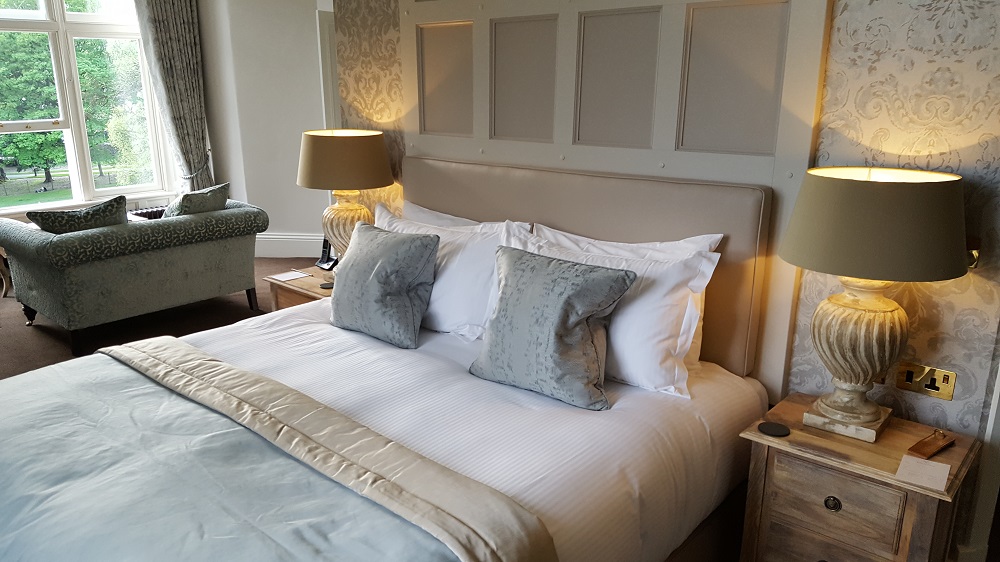 Moving downstairs, I get to sneak a peek at the open-view and modern kitchen, head chef Kevin Tickle’s team already busy at work preparing for the evening service ahead, as well as the spectacular wine cellar – it disappears into a cavernous opening below me as I try to get a glimpse at its treasures through a glass panel beneath my feet. An example of the blend of state-of-the-art and carefully restored historicity that makes this hotel so appealing. 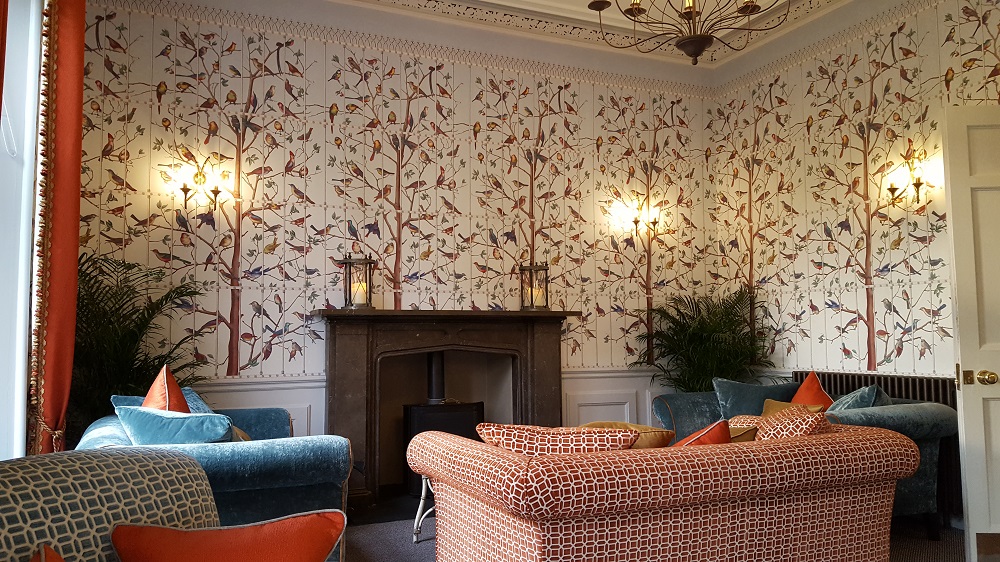 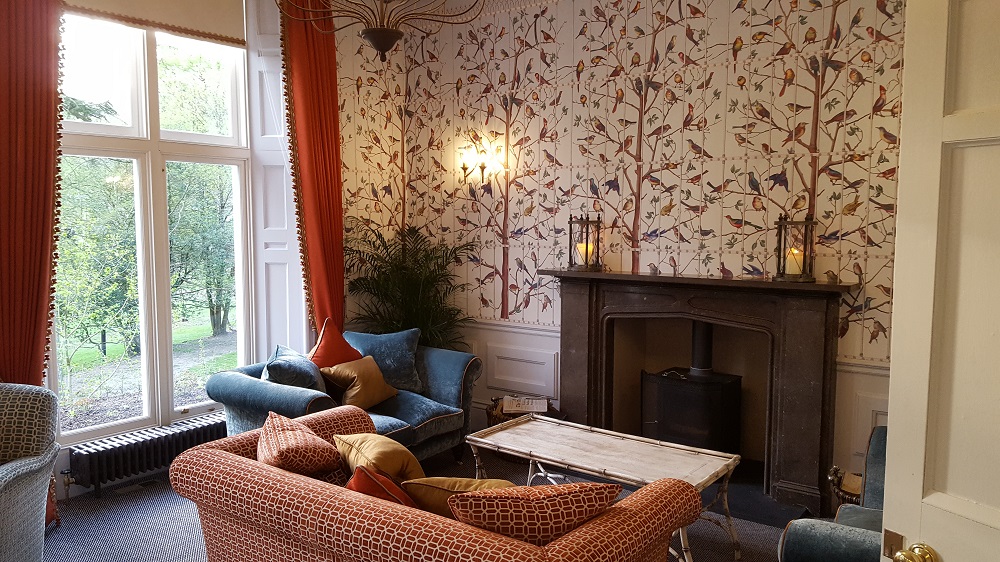 The look and feel of the lounge areas exacerbate the rich, textured feel of the rooms upstairs with varied wallcovering choices – the zany ornithological theme of the smaller lounge area balanced out by beautiful, shimmering metallic Lustre Quartz in the larger room – elaborate mirrors, original fireplaces and decadent sofas. These all offer more of an assault on the visual sense than in the guestrooms. But an earthier, rustic look is achieved in the dining room, complete with glorious views of the grounds and beyond. I adore this space and it’s my favourite in the whole hotel – I love the fact the dining tables are made from reclaimed wood from the original floorboards by a local carpenter. A superb touch. 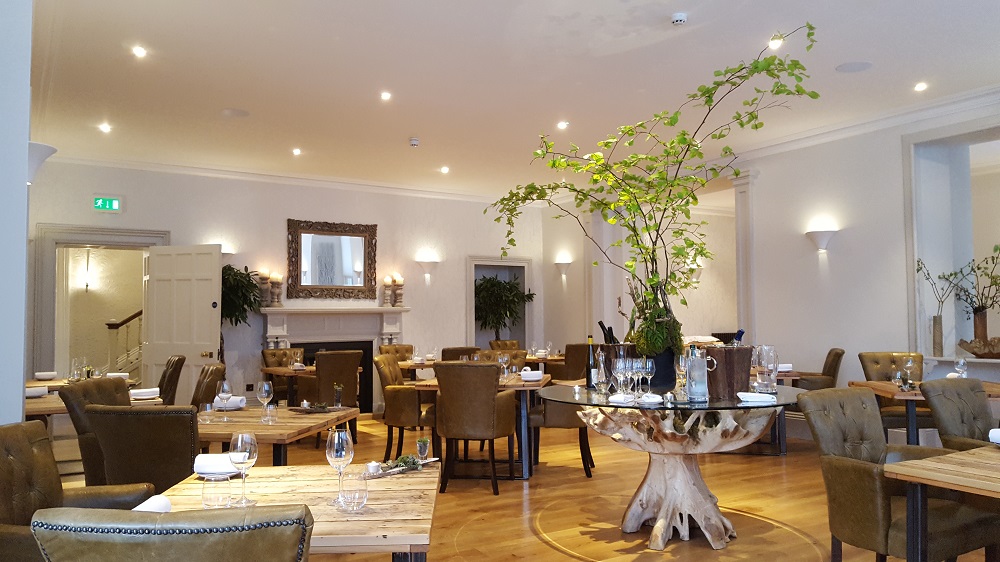 The next morning, after a hearty Cumbrian breakfast (what else…?), I’m shown around the hotel’s marvellous, manicured foraging / kitchen gardens built a short walk from the hotel itself on top of land originally left to overgrow; it’s now home to a host of vegetables, herbs and deliciously edible things I never realised were edible. “Not many gardens with such a view,” Andrew remarks as we gaze out on the dramatic Lakes landscape and local landmark ‘Lion and the Lamb’ rock formation. I can only agree. 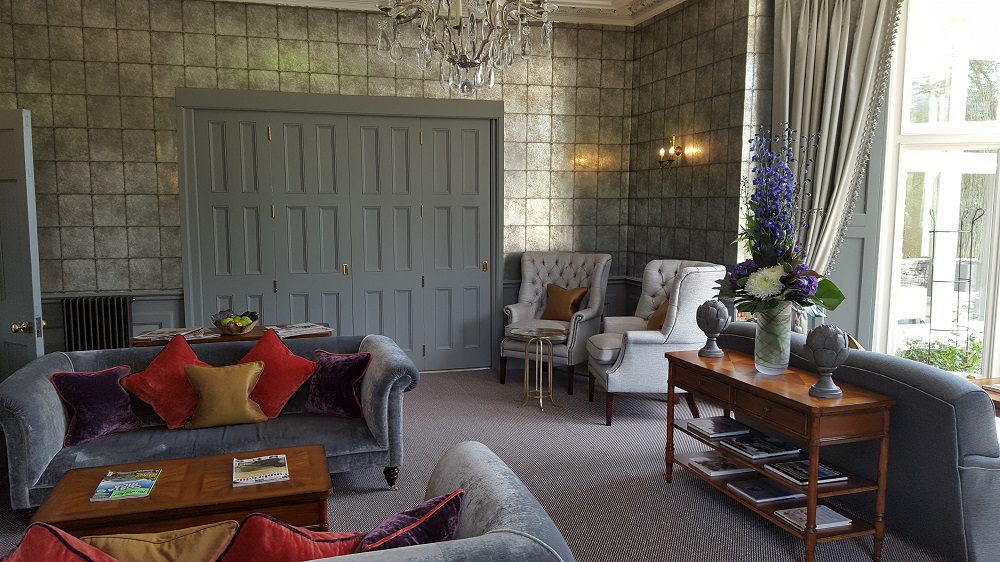 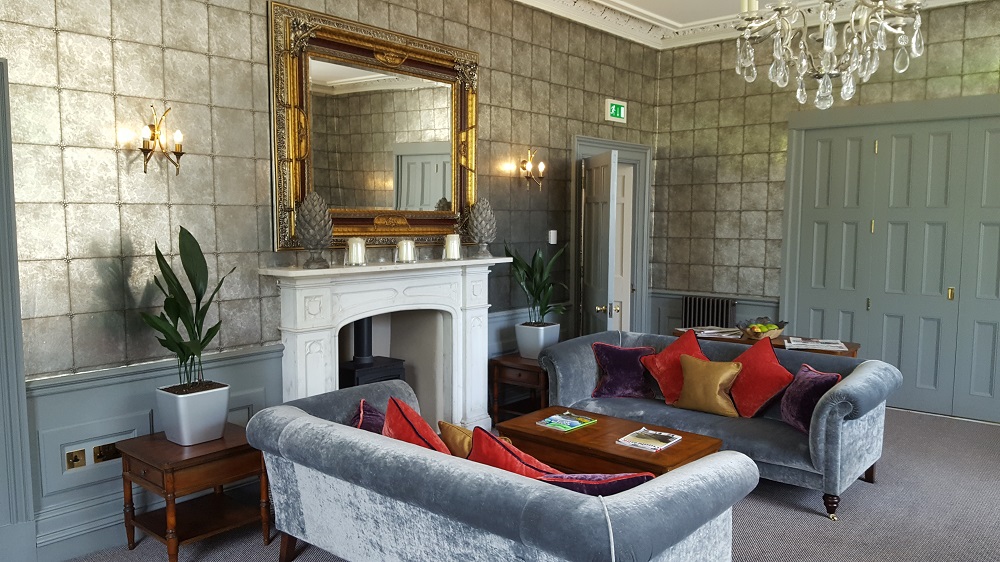 It’s with a heavy heart I have to pack up and leave on the long drive back south; I could have spent a week enjoying this gem of a hotel and exploring its locality. A no-expense-spared approach to the refurbishment and interior design is matched by the entire Forest Side team, whose accomplished, professional but personable approach to their work only adds to the experience of what is an outstanding property.

Chatting briefly to Andrew before I leave, I discover he started his hotelier career having previously read chemistry at Cambridge. If his two other properties are half as good as the Forest Side, it appears he really does possess a Midas touch – especially when it comes to boutique hospitality…

Based on a stay in May 2016
Photos: Daniel Fountain // Forest Side Facebook
www.theforestside.com