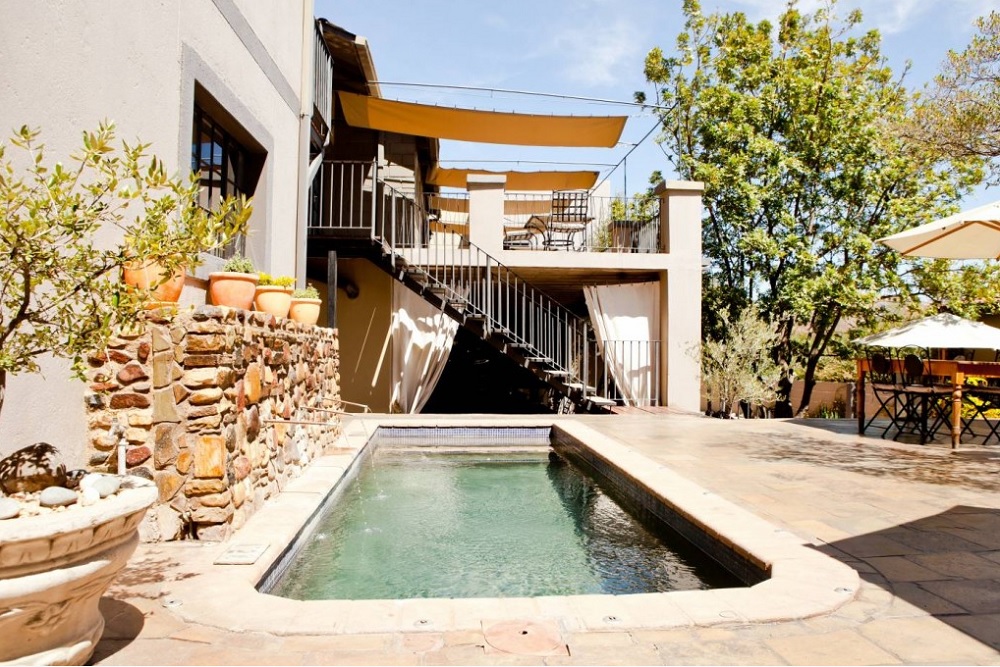 Concrete is the last material I expect to see as part of the finishes in an hotel room. Oh I know that poured concrete is a modern construction material. I have worked on hotels where it has been a source of problems, seen it used in the construction of bathroom pods, so I’m familiar with its great qualities. But I have never seen it used as a polished finished material, where the construction kind of extrudes itself into making the bathtub, bedhead, vanity unit.

Where the material also ingratiates itself as your floor and wall finishes, polished and with inset subtle pieces of coloured glass. Where white paint, white linen and white towels provide an almost ascetic aesthetic against which drama is provided by the play of light from African sun by day and metal lanterns at night. 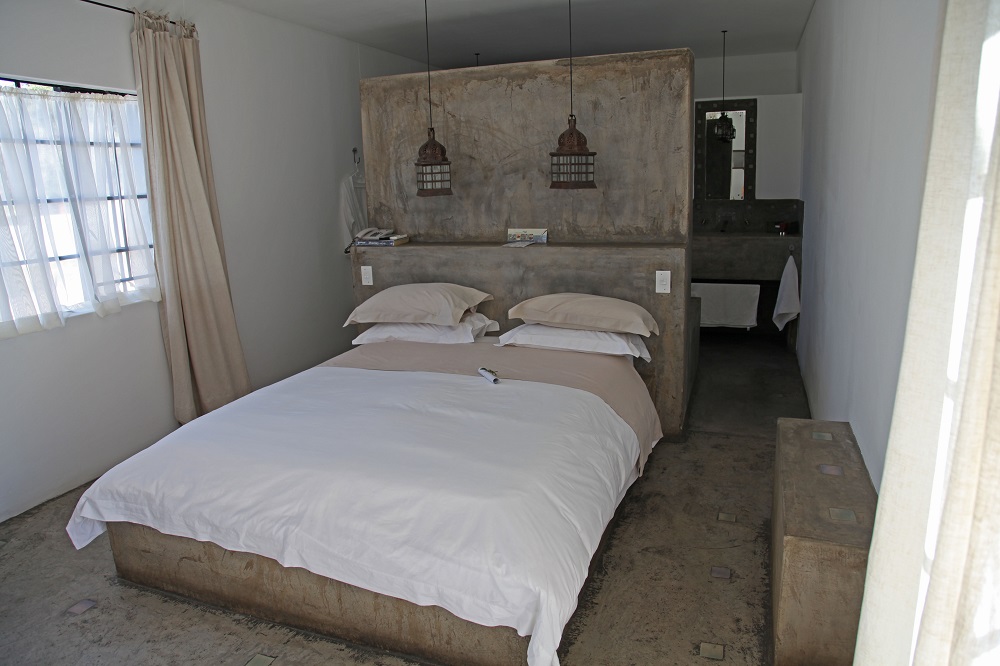 In this quiet corner of Windhoek, Namibia’s small town capital, is the misnamed Guesthouse of the Olive Grove. Namibia is the country with almost the lowest population density in the world at roughly two people to every square mile, so creating an oasis in this town is unnecessary when there is so much country side to retreat to. So here we have a sophisticated urban boutique bridging the gap between western sophistication and wilderness that is the attraction in this country. The voter population of 1.18 million people is estimated to have over 110,000 of them working in the hospitality industry. As the country recovers from a brutal war of independence the government leads the conservation work backed by tremendous private effort. Effort that is epitomised not by large institutions but by individual such as the operators of this, one of Windhoek’s premier boutiques.

I’d love to have seen more of Windhoek. The remnants of the colonial occupiers in the form of the German architecture, churches and even a castle are apparently remarkable. But this was only a transit point on the way to Review the lodges at Little Kulala, Damaraland and finally Ongava in this beautiful country. The five hour delay endured through Air Namibia robbed me of any time for tourism and my meetings, but I was fortunate that the interim accommodation in the form of this supposed guesthouse that is the Olive Grove set me in one of those places where one doesn’t mind getting stuck for a while.

I say supposed guesthouse because this is so much more than just another guesthouse or B&B. There may be just a dozen rooms and three or four suites but they have been well planned and well thought through. The relaxation is encouraged, and although close to the centre of Windhoek the view from the terrace is over the countryside surrounding the town, its ridges and hills practically bare of settlement.

As a transition from the bustle of Johannesburg or Cape Town, an adjustment from the frenetic pace of a European or American City, then a pause here is worthwhile before venturing to the Wilderness.

The silence at night is almost as intense as the darkness that reveals the African night sky. Its dark cobalt is shot through with so many stars that their number is infinite. There are so so many that they in themselves are a wonder that we have lost in the light pollution of our great cities. A pause in travel gives time to slow down, to relearn the art of watching and listening.

“terraces that look out across the newly planted 200 tree olive grove.” 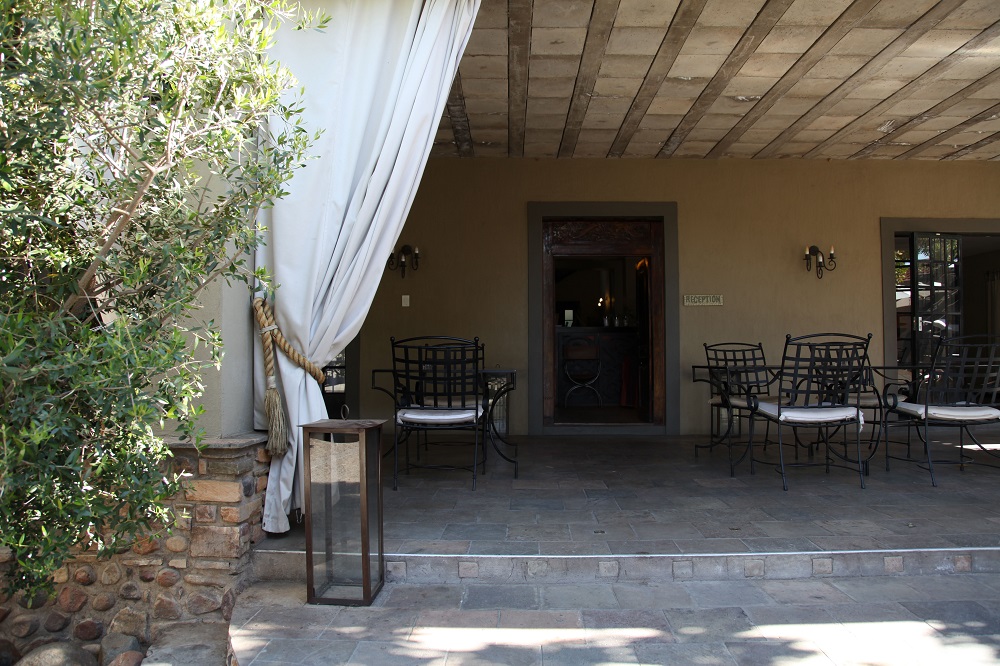 Rooms are generously sized and have terraces that are shaded by horizontal blinds on runners that provide shade from the sun, terraces that look out across the newly planted 200 tree olive grove, and provide a perfect spot for reading or writing. There is a small plunge pool, for cooling off in the summer (our winter months – this is the Southern hemisphere) when it can get oppressively hot, surrounded by loungers to which smiling staff bring cold drinks.

Lingering breakfasts are taken on a terrace where canvas curtains keep out the morning chill from a space heated by those ludicrous steel umbrella heaters that seem so pollutingly unnecessary in Europe but are so worthwhile here. Here too is the lounge where a drink can be taken before dinner, although the small kitchen makes for a small menu. True to the guesthouse roots the hotels will provide a taxi service to local restaurants, which include the Namibian Institute of Culinary Excellence, funded by a German safari outfit to train Namibians in the culinary arts.

Learn the Namibians are too, not just the culinary arts but hosting and design. As experience grows so too does the ambition of Namibians working in our industry – not just the housekeeper who proudly asserted her intention of starting her own Guesthouse, but the owners who’s interior design touch grows more assured as they work on their building more. The new suite created overlooking their newly planted 200 tree Olive Grove is evidence of this growing confidence.

A step up from the standard rooms, this uses more contemporary pieces to create a set of spaces that are stylish and comparable with suites anywhere. The space is large and rooms flow from entrance to lounge to bedroom through to bathroom and finally to the sun trap outside areas. With their outside cooling shower these very private areas are quiet and protected with the suite almost self contained from the hotel. 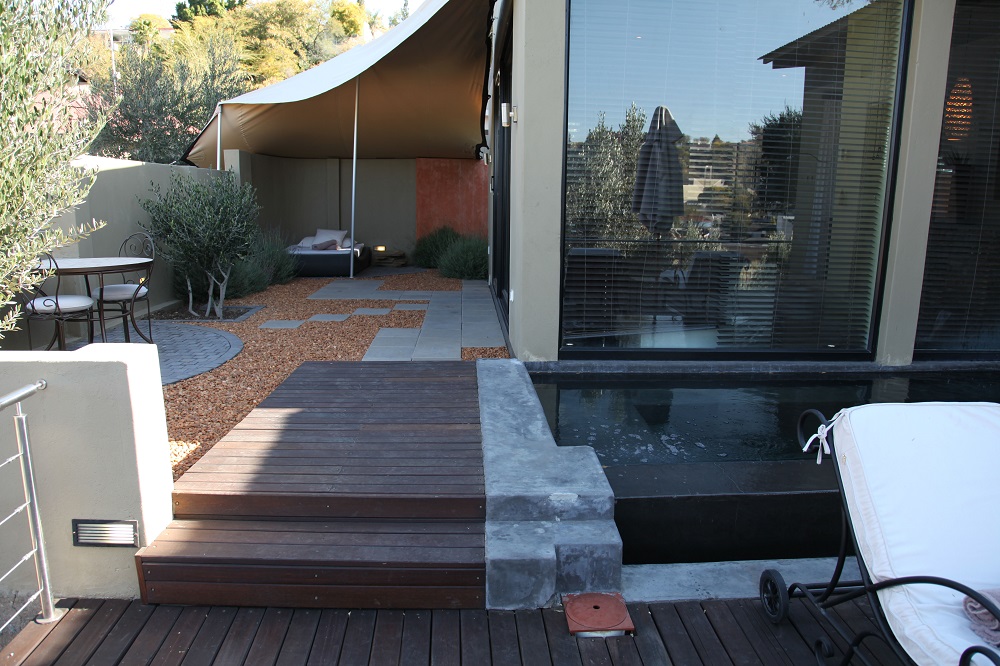 The entrance is set back off the plunge pool terrace, with dustily coloured fountain trickling water alongside. Entering the cool beyond the lobby decants into a lounge with floor to ceiling picture windows. The windows look onto the terrace and over a small private plunge pool, and have views overlooking the olives. The space is separated from the bedroom by the large flat screen TV and cupboard unit. Internal finishes are again the polished concrete of the rest of the building, with subtle variations on the colouring. These finishes are complemented by the natural materials used in the furnishings.

The architecture and interior design I saw throughout Namibia used flowing forms where the very structures appeared to grow organically. Whilst breeze block construction ordered straight lines the thatch and tree trunk construction style insinuated itself in this urban environment with roofs and canopies frequently flowing following organic forms. With the nature of the climate dictating a flow between interior and exterior unfamiliar to those from northern Europe, space exploited natural light, ventilation and the use of water and plants.

In art history I was taught there were early cultures in Africa that were totally based on the circle, where the square was not used.Certainly design seems more organic. Maybe too the closeness to nature everyone must be conscious of in Namibia reinforces the organic and natural content of design styles here. To use a much abused set of terms, they appear much more sustainable and environmentally friendly. Perhaps there is much to learn from here.