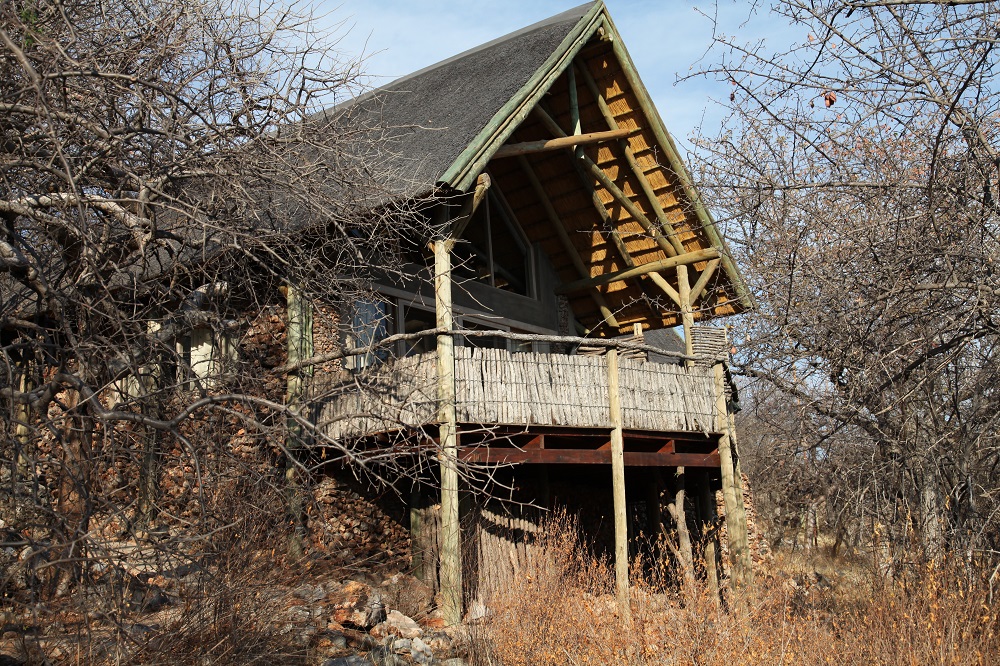 The boy was nervous, shining his torch carefully into the shadows, walking slowly so we were treading on his heels. The man with the rifle was alert, holding his weapon across his body, finger on the trigger guard. Was this a piece of hotel theatre staged for effect? We were walking back to our room after dinner, and were not allowed to leave the restaurant until our escort was in place.

Ongava Lodge is constructed on a small hill in the 323km² (125mile²) Ongava Game Reserve, a private reserve just outside the main gate of the Etosha National Park in Namibia. The National Park’s original 100,000 km² (38,500mile²) made it the largest game reserve in the world when created. The aim was to stem the rapid depletion of wildlife in the area, and protect the land through which the seasonal migrations passed. Then, just as a nature conservation unit and several tourist camps were set up, the reserves were redefined and Etosha shrank to its present size covering an area of more than 22 750km² (8,750mile²).

The addition of the private parks, many of which abutt each other and Etosha, has extended the range of protected territory as well as that of the predators. A ribbon of such reserves now stretches down through Damaraland and the Skeleton Coast to the Sossusvlei, the Namibian Sand Sea. The Lodges are all connected by dirt tracks and the areas own bush airline Sefofane. 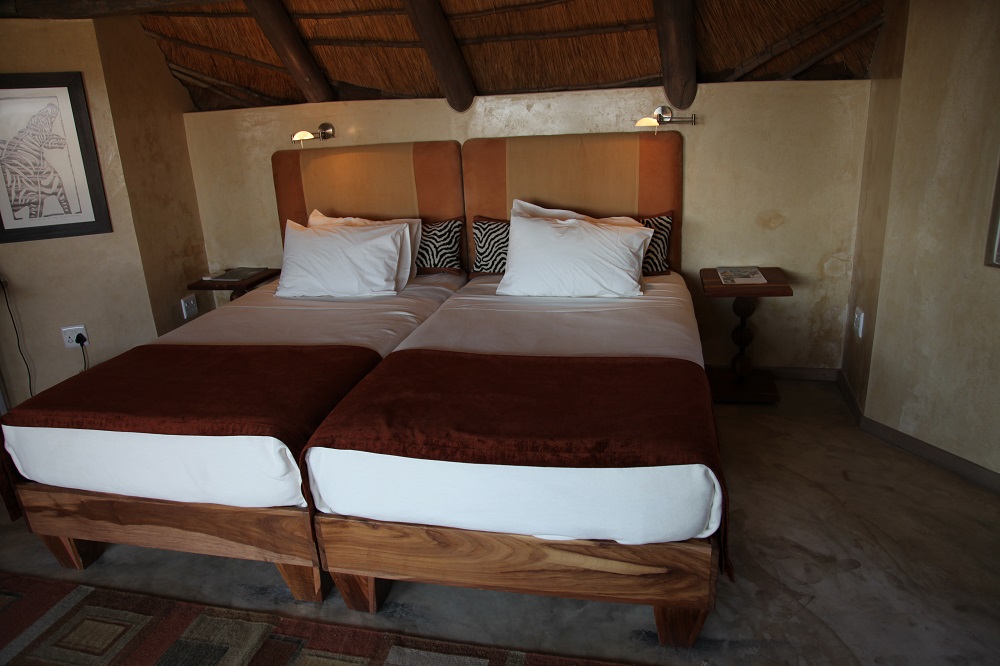 So is the escort a piece of theatre by the Lodge to see guest safely back to their rooms? The second night, after a long working day, I decided to go back to our room early, long before dusk, and sit quietly on the balcony with a bottle of chilled white wine and watch the vault of heaven light up with the myriad upside down constellations of the African sky.

As we settled into our wicker chairs, wrapping ourselves in the provided blankets against the chill night air, a black backed jackal walked past a hundred or so metres away – followed by two lionesses and a lion, all on their way to the Lodge water hole. ‘Red in tooth and claw’, such wildlife is why tourism is growing – and why operators take every precaution to ensure the safety of their guests. As our guide said “we haven’t had anyone eaten this year…yet.”

The embrace of nature is a part of the philosophy of Wilderness Group who use the out of season times to provide experience of the game parks to children from African cities through their Wilderness Trust. They have lit enthusiasms, then paid for development and education both for individuals and whole communities. Now many have done this but uniquely Wilderness funds their activities, on over 60 sites across Africa, with luxury hospitality developments (see Little Kulala and Damaraland for other examples). 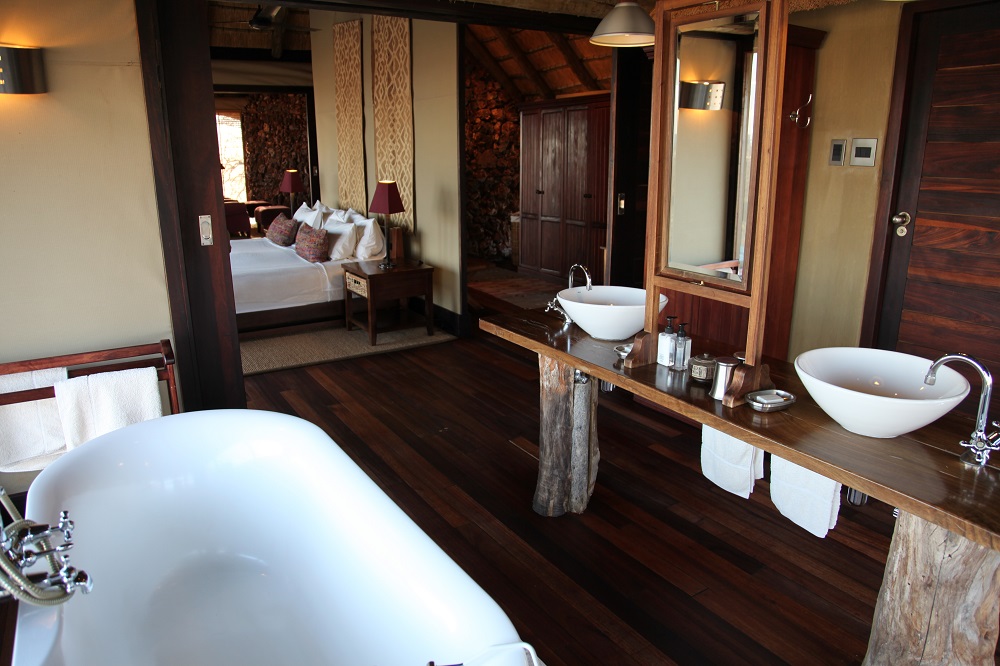 The luxury wraps around the guests at Ongava sometimes striking a slightly discordant note, such as when one can watch rhinoceros or giraffe at the waterhole whilst sipping an iced gin-and-tonic at the bar. The comfort is five star with meals served on the restaurant terrace under the stars or under the thatch, with clear views down to the plain below. Dusk and dawn, evening and breakfast time provide the best game watching as the beasts move to water then, but all the rooms are aligned to watch the waterhole or game paths.

As evening draws on the terrace has a fire pit to sit around and there is always the escort waiting to see guests safely back to one of the 14 rooms. Game paths also run between the rooms, and it can be a little startling to find a buck some ten feet from your balcony in the morning — to the buck too, although they don’t always take fright (too stupid?). Balconies are large and have an outside shower as well as the interior shower, allowing sun worshippers a quick cooling drench when the heat becomes too much to bear.

The individual lodges vary in size, but all have their own air conditioners, although in late July it was still cool enough under the thatch that their use was not necessary. Rooms have ample space for clothing and a daily washing service is included as the guest luggage allowance on the Cessnas is necessarily very limited. Laundry taken away one day is returned the next, neatly ironed. 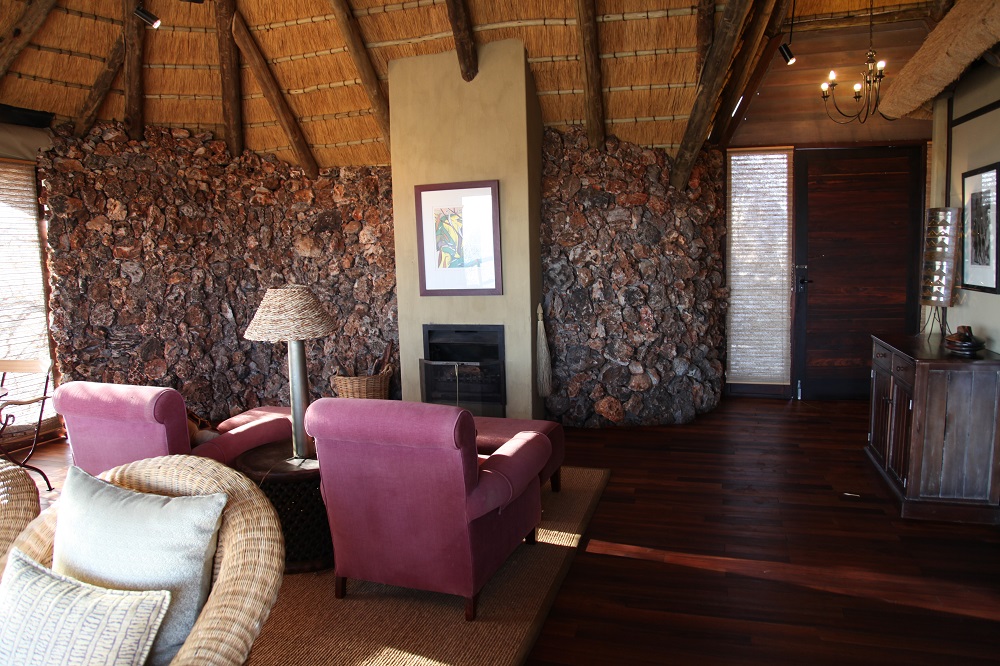 The large shower room is organised so that the twin wash hand basins have a window in front of them through which it is possible to watch the waterhole whilst washing. Materials throughout are carefully chosen to reflect the environment but the whole is sophisticated with electric shaving points and ample power points for charging cameras etc..

Walls and floors look like a concrete version of Venetian plasterwork,and this is practical, being cool in the heat and easy to maintain in the sandy environment. The rooms open up into the thatch providing a large air circulation area to aid cooling. Windows have timber bars for security, which also help provide shade from the heat of the sun. Large French windows open onto the balcony and the absence of TVs and radios allows the wilderness to speak.

There is a separate higher-level lodge called Little Ongava. There, three large apartments each with small infinity pools, lounges etc make up the ‘suites’ of the Lodge. The Lodge has its own pool with sun loungers, sometimes shared with the dassies, and offers the main dining experience but the suites have their own self-contained lounges. Approached by high-level timber walkways this exclusive area was apparently adopted briefly as a sleeping platform by some lions shortly after opening, slightly surprising guests when they opened their front door!

The suites, like the rooms in the main hotel take their design cues from the African vernacular we have seen in other hotels reviewed updating them with luxury described by one commentator as “mixing Robinson Crusoe with the Savoy”. The resulting mix is however far more sophisticated then Crusoe may have managed and energy conservation, water recycling and safeguarding the guest’s physical well being all are part of the designers approach. 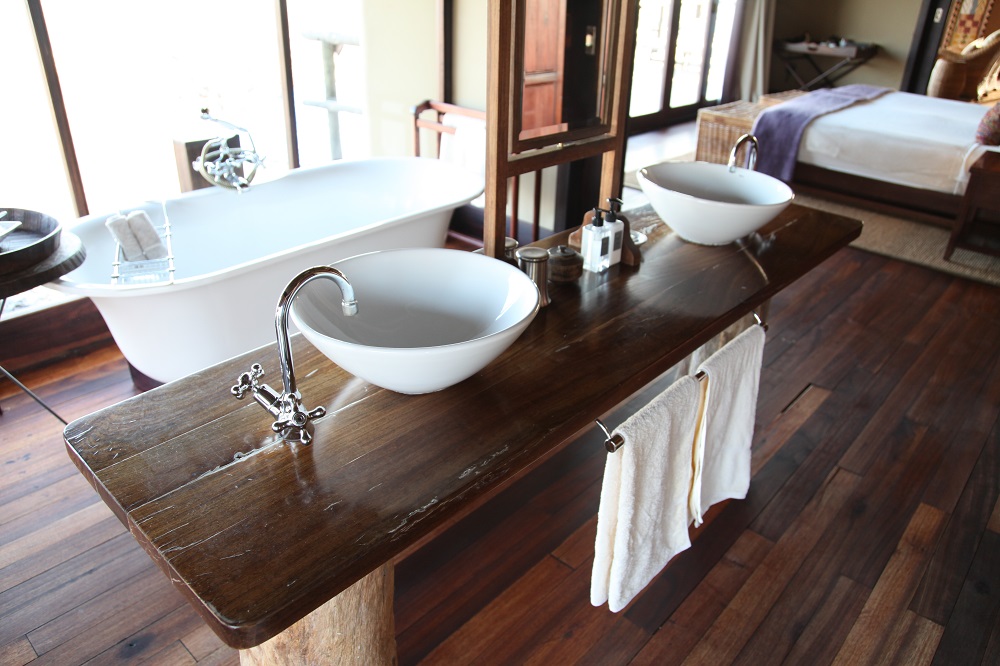 Game Lodges are a specialised sector of the hotel market. They are set in remote locations where the guest is prepared to endure journeys of enormous distances. Guests live in comparative isolation away from the comfort and security of 21st century city living in order to experience the adrenalin rush of being close to big game.

Despite their isolation and having to rely on their own abilities to supply water and power, these Lodges have lessons for all hotels. Some are obvious such as energy conservation and water recycling. Others are less obvious such as using the local vernacular within guest accommodation to reinforce a sense of place or enhance the theatre of experience. Even the game trails and experiences of seeing wildlife have lessons for hoteliers elsewhere as I showed (slightly tongue in cheek admittedly) when I created a wildlife safari suggestion in my Review of the Premier Inn Woking. David Seymour of Seymours Hotels has done it successfully in Jersey with his very successful guided walks along the tidal beaches on the island.

In all the lodges I have Reviewed there has been a successful blend of comfort with closeness to the environment. Standards of comfort and facilities rival those of any London four stars and are competitive with many of the city’s five stars. As the Cube in Austria has taken a hard look at its market and changed the design parameters to meet the identified guest need, so Wilderness have taken a hard look at the cost benefits of their design and guest needs to create something special.

If travelling and staying in hotels is about creating memories, then Ongava must top the league.