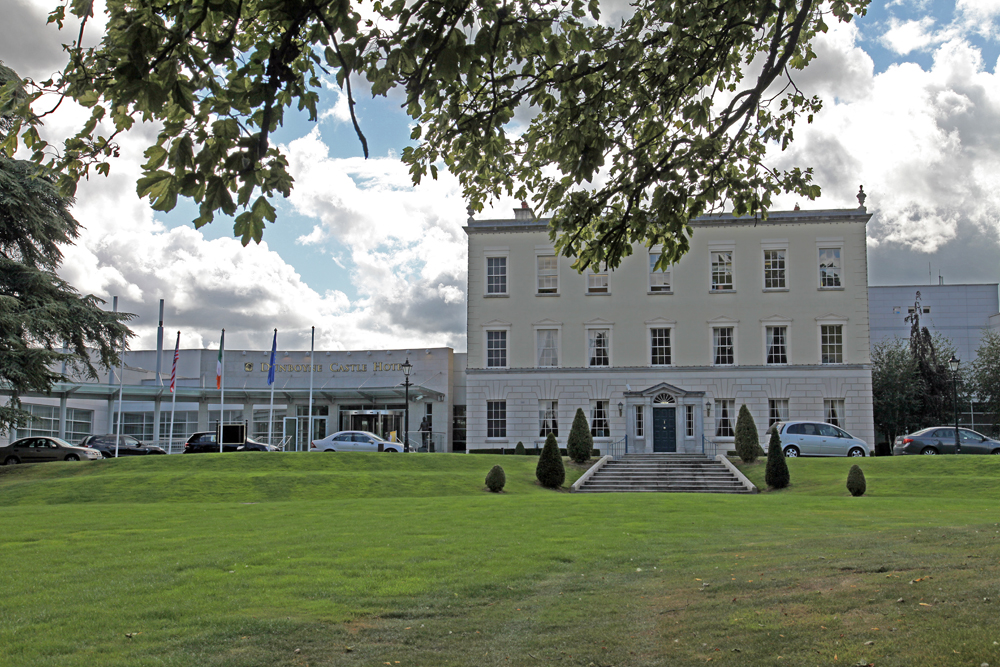 The English aristocracy didn’t just build their country houses in England. Scattered across the whole British Isles are grand houses that remind one of the divide between a land owning aristocracy and the rest of us. Nowadays we still see trappings of wealth in large houses but few on the scale of the English country house. These country houses have become famous as the basis of fine hotels, frequently charging such expensive rates that they become the playground of latter day aristocrats.

When a country house is used as the basis for an hotel it often stands apart from the new build sections. At Dunboyne Castle Hotel & Spa, the aristocratic mansion first became a home for nuns; then for a while it served as farm buildings before a six year planning battle (perhaps more English than Irish for its lengthy disputation) finally saw the house incorporated in a new hotel. Incorporated because it is indeed incorporated, not separate from but embraced by the modern structure that hugs its side and rear walls. 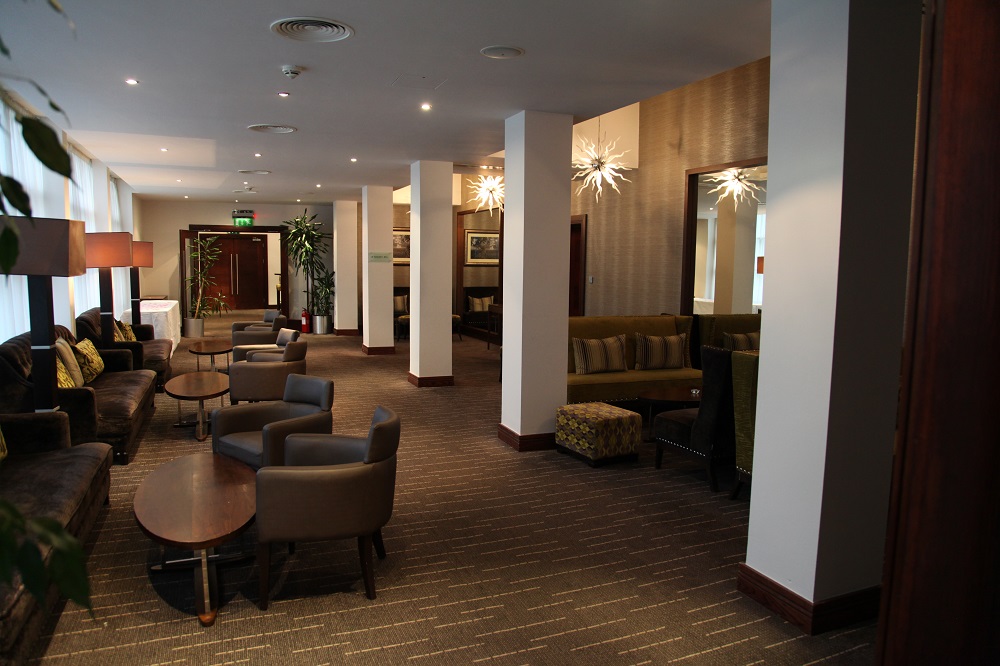 The hotel sits in 100 acres of ground next to newly developed commuter homes for Dubliners. The landscaping is a little bleak and the new estate is kept apart through fencing from a rear ‘garden’, an area with a sunken pond and meandering path that sits in a piece of unattractive grassland and car park. More life and vitality, along with possibly more custom for the hotel, might have been generated if the community had been embraced. Instead very formal front landscaping reinforces the separation achieved to the rear. The overall effect is a rather crass new building sitting in a very institutional piece of imitation country house parkland, with the country house standing uneasily alongside.

The institutional feel carried through into an interior spoiled by a mania for cost cutting (see also Irish Hospitality pts 1 & 2) has led to understaffing and other operational ‘savings’. These lead to a visual destruction of good design and poor guest experience alike.

The country house is not central to the interiors, but sits on the side of the modern interiors. Much of the lighting was turned off, creating an uninviting feel which serves to help keep the country house section feeling closed. Its rooms are beautiful and deserve to be fully utilised, instead of which they are kept for weddings and the smaller business meetings. Most of the new building extends to the rear with a magnificent and very large spa. Function rooms and exhibition areas are centrally placed continuing to one side whilst the bedroom block goes off on the other side. From the front the old mansion house is treated with grace and sensitivity but from the back it is lost, its Georgian proportions hidden by the new buildings. 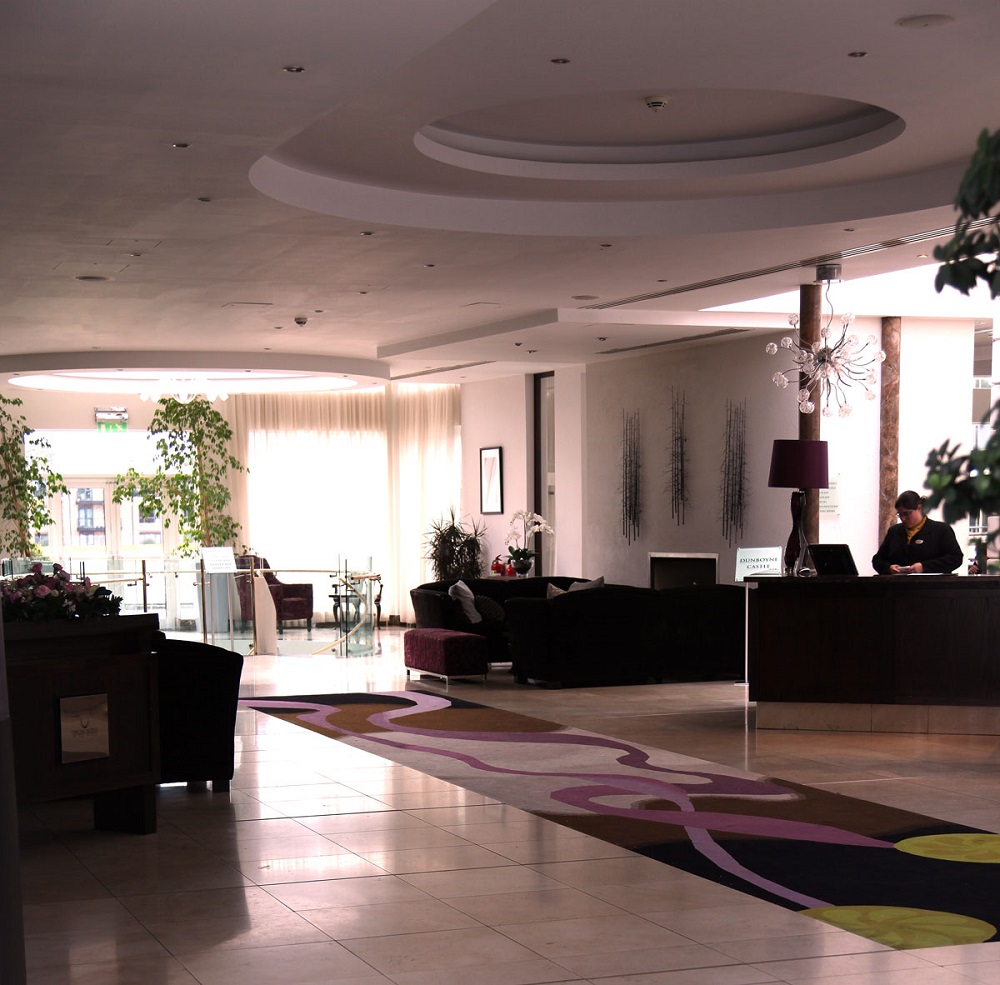 Internally the junction between old and new is again handled well architecturally but is let down by the lighting. I find it difficult to make up my mind whether the lighting is badly designed in the public area or whether management practices which dictate leaving lights off are to blame for the lack of sparkle in these area. The corridor alongside the bar lounge and the old mansion is top lit by daylight, but the lighting in the adjacent spaces is left off it seems in daylight, making the whole area uninviting. I have heard some Irish operators blame the green hotel policies of the Irish government, but this is hotly disputed by the agency concerned and seems more to do with management using any excuse in a difficult market to keep lights off to cut costs. It makes the spaces very unattractive to guests, robbing them of life as the comparative images of the reception area show.

In the old house, with its glorious public rooms, the lack of lighting is a deterrent to guests using the spaces. However the impact of this approach is shown in the bar operations. With so much of the income generated for the hotel now coming from functions, I noted one evening when there was a large wedding reception on the lower bar/bistro closed as staff were seemingly diverted to service the wedding and its bar upstairs.

The physical separation of the bedrooms from the function area does not insulate them from noise either. The outside terraces into the function rooms allow noise transmission and a number of guests commented on this happening in the early hours of the morning when presumably the terrace doors are thrown open to encourage function guests to leave quickly. The artwork is all reproduction Vettriano prints – love’em or loath’em this is the 21st century equivalent of Trechikov, supposedly the most reproduced artist of the 20th century. Like the artwork, the colour scheme is bland and inoffensive but rooms are well lit, all the switches in the right place, and many with balconies and opening windows. 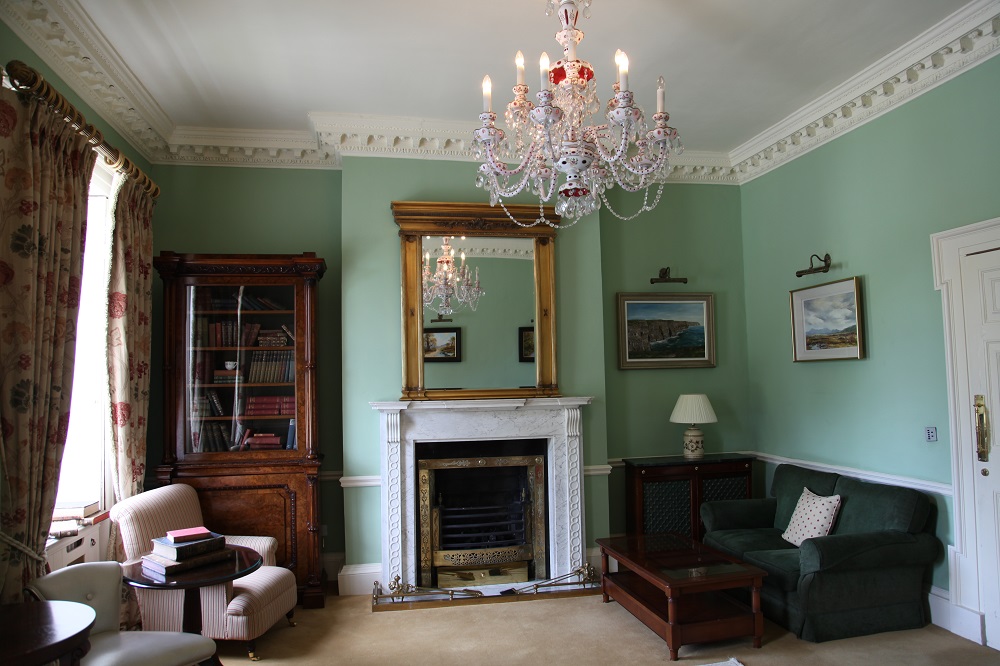 There is a good sized work desk and large mirrors, together with a dining table and chairs meeting criteria for five star rating (unlike some hotels in the UK I have seen recently which fail to meet Visit Britain five star standards yet are given a five star rating – I wonder how?).

Here where inspection is tight and a hotel has to meet certain criteria before it can even be called an hotel, the generous room size would embarrass many London hotels who are second rate by comparison. The UK is increasingly out of step with European rating practise and moves now adopted by nine countries to harmonise standards. The suggestion by UK ministers that TripAdvisor should be used is risible. These rooms are well sized and fitted out and offer free WiFi too.

I say the bedrooms are almost the best part of this hotel, because they are second to a beautifully designed sumptuous Seoid (meaning Jewel) spa area over three floors. It claims to be one of the most luxurious spas in Ireland, and this I can believe. It has all the usual therapies, but also includes a full razul experience. The whole area is well lit and doesn’t suffer from the cheap ‘energy saving’ approach characterising the rest of the hotel. Instead it creates the ambience and luxury to be expected in a top quality spa. The lighting sparkles where it needs to and is subtle where warmth and relaxation are the key. The location of the hotel, close to Dublin but out in the country, makes the spa a good draw and there are also several leading golf courses within a few minutes drive. 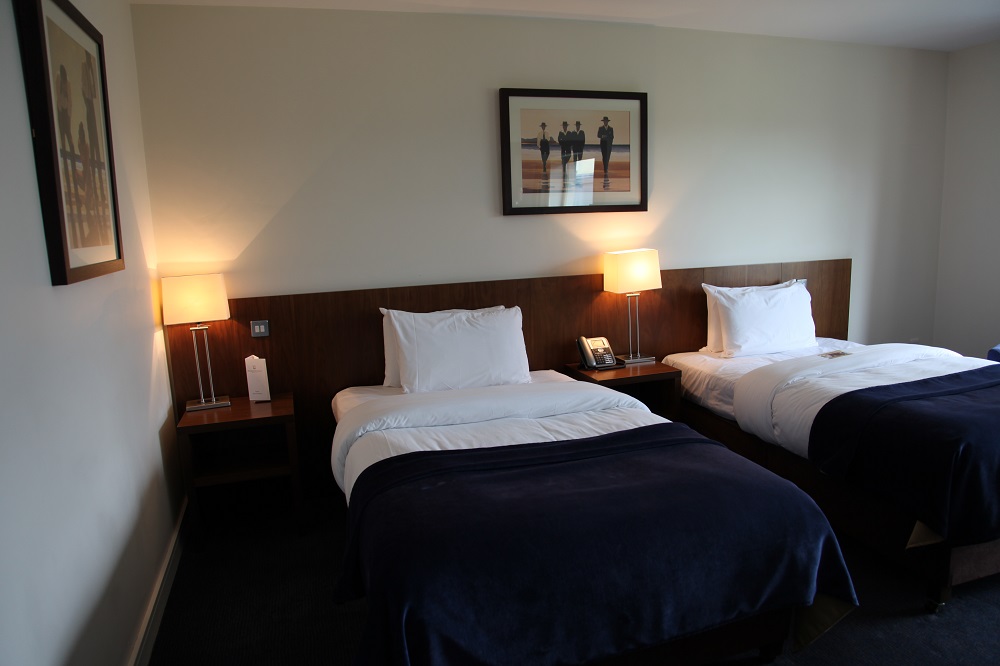 The spa reaches over three floors and includes a slightly bleak outdoor whirlpool. The indoor pool is nicely designed (apart from the intrusion of the columns). Interior designers really should whip the architects and structural engineers into line as so many interiors are spoiled by columns being unnescessarily visually intrusive. The outdoor areas really don’t work here. It is almost as if they are awaiting further development. More planting would help keep down noise and add colour to the rear, sorely missed in the views from the bedrooms. For such a luxury spa the outdoor whirlpool is functional rather than indulgent.

Treatment rooms are well designed and offer a range of treatments, whilst relaxation areas are warm and womb like, supporting the therapies offered. There are stylish touches throughout the hotel that combat the slightly institutional feel created by the architecture and landscaping. For example, the staircase down to the sports bar/bistro has been turned into a seating area by simple addition of a sylish throne chair and a small banquette seat. The lighting is the key to all these areas and with it turned off there is a gloom pervading that robs the hotel of the theatre and sparkle it deserves.

Couple this with understaffing (and the staff here are very, very good) and the whole guest experience is downgraded. The sports bar/bistro staff appeared to be transferred to service a wedding bar on my second night so it was closed. The second bar, a snug Irish pub, was deserted – like the Marie Celeste abandoned to voyage alone. 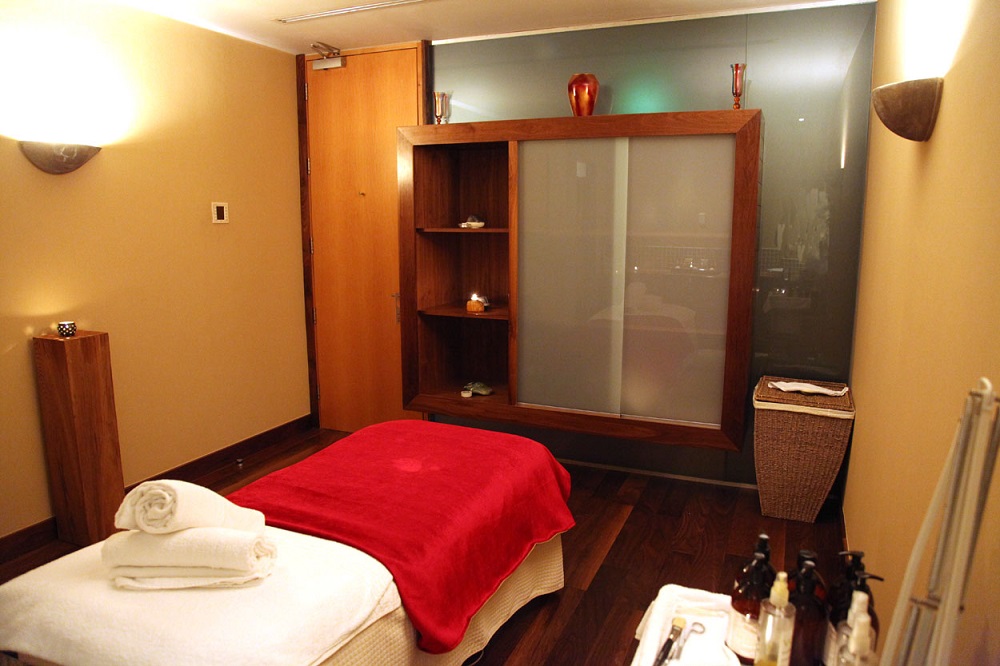 This is a well designed hotel, seemingly caught up in the recessionary pressures that characterise so many Irish hotels and which management is fighting with desperate measures. The ‘coming out balls’ are a great saviour of hotels all over Ireland at the end of the school year it seems, but the view of many in the industry is that there are 30% too many hotel rooms in Ireland.

With over 100 of 900 hotels basically in the hands of the receivers, tourism here will need to recover a long way to turn the hotel economy around. Dunboyne has the location and the Spa, plus nearby golf courses which will makes this one of the flourishing survivors if the short term management solutions being applied don’t deter the well-heeled punters it needs to attract.

© Words & Pictures Patrick Goff. From a visit in August 2011