“You’ll love it,” I was told by friends when I mentioned I was heading to Jersey for the first time.

It’s true, I knew little about this Crown Dependency nestled in the Bay of Mont St. Michel before I flew over (at the second attempt) from the mainland; this British-but-slightly-so-Gallic island had never been on my radar of must-visit destinations. After spending two days discovering this delightfully quaint bailiwick, that has most definitely changed. 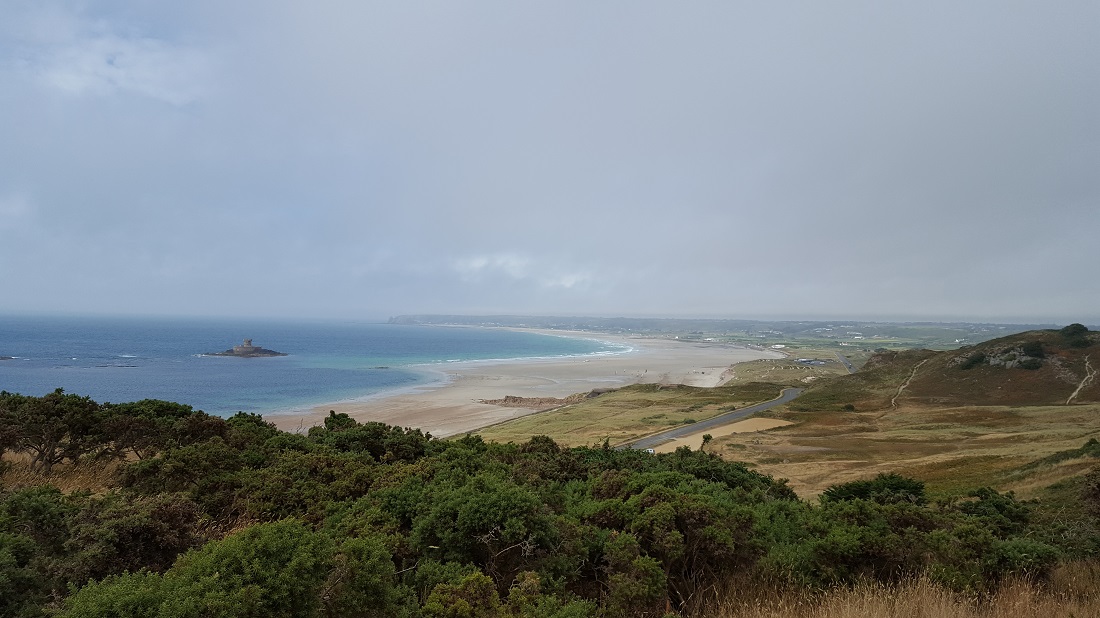 The view over St. Ouen’s Bay from the hotel’s headlands

I was visiting to spend an evening at the Atlantic Hotel in St. Brelade, a family-owned hotel under the stewardship of Patrick Burke and his wife Treena, and to review the two restaurants attached to the property. Prior research showed me that the hotel has built up a reputation for being one of the best hotels on Jersey. Indeed, when I announce my destination to my taxi driver, he nods his approval and commends my choice. With its effortless luxury and excellent service, it’s easy to see why.

As we wind up the entrance road, I’m struck by the markedly 1930s-style exterior of the building, which is surprising considering the hotel was purpose-built and opened in 1970 by Patrick’s father Henry – but it makes for a refreshing change to the over-modernisation often encountered at projects back in London. Yet, given the retro vibe of Jersey it’s certainly not out of place and its ocean liner-esque appearance is befitting of Jersey’s obvious oceanic feel. And as soon as I enter the hotel, I note the understated elegance of the public areas. 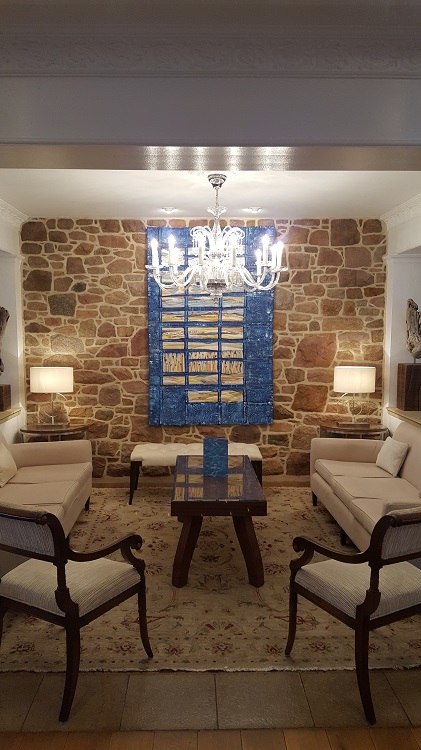 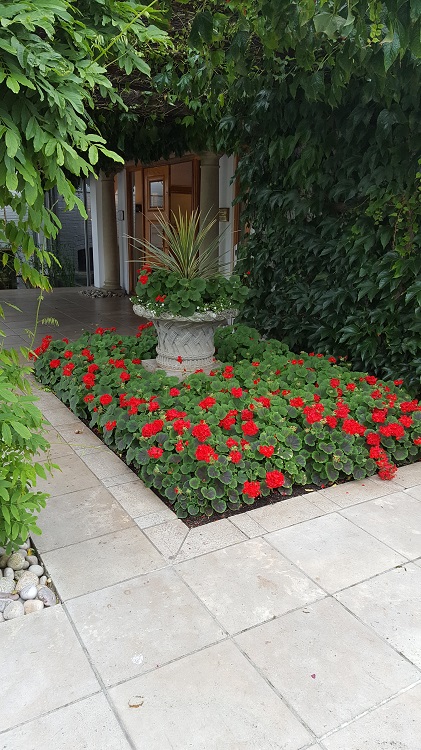 The reception-cum-lounge area is light, airy and the wooden floors and occasional exposed brickwork all reflect the property’s coastal locale. It’s an excellent blend of modern and classic. A range of sand-and-sea motif pieces from local artists line the walls – alongside beautifully appointed, unique furnishings – and the ‘Atlantic Dunes’ by Nicholas Romeril takes my breath away as Patrick explains the story of how it came to be in the possession of the hotel whilst Naomi Renouf’s ‘Crossing the Sands’ is an eye-catching centrepiece. The source of the constant sound of rushing water is a fountain set in a water feature traversing the indoor-outdoor divide complete with a carp fishpond. This space is built for a life less rushed. 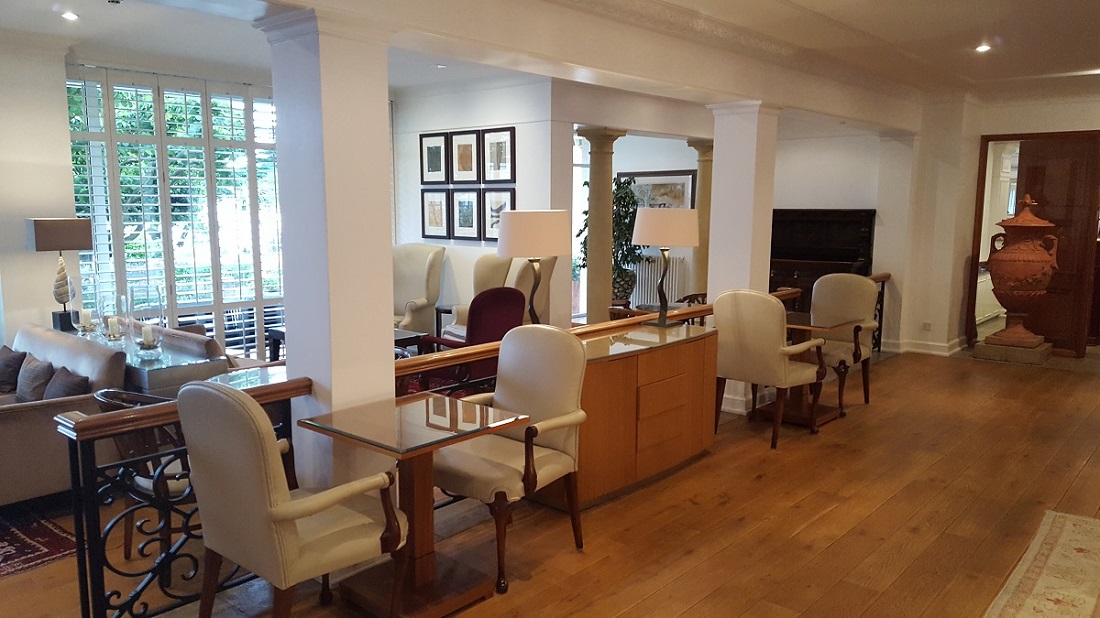 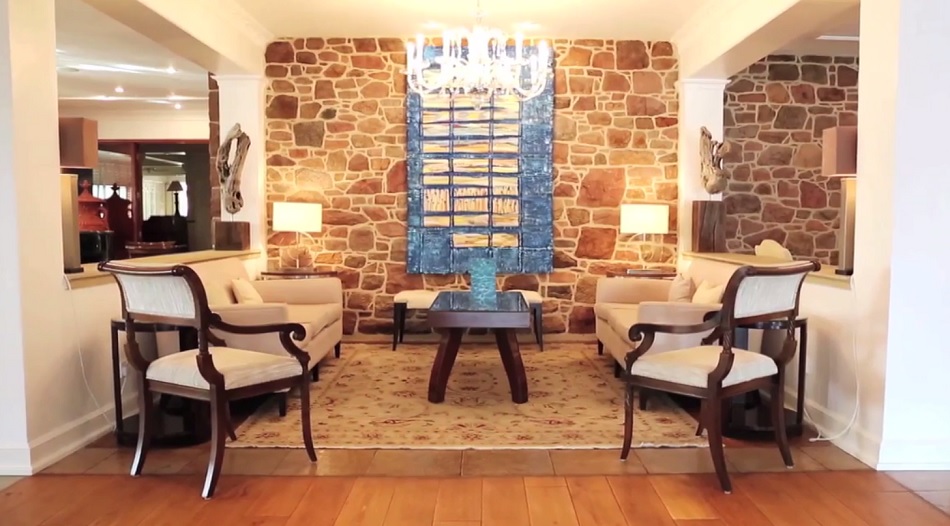 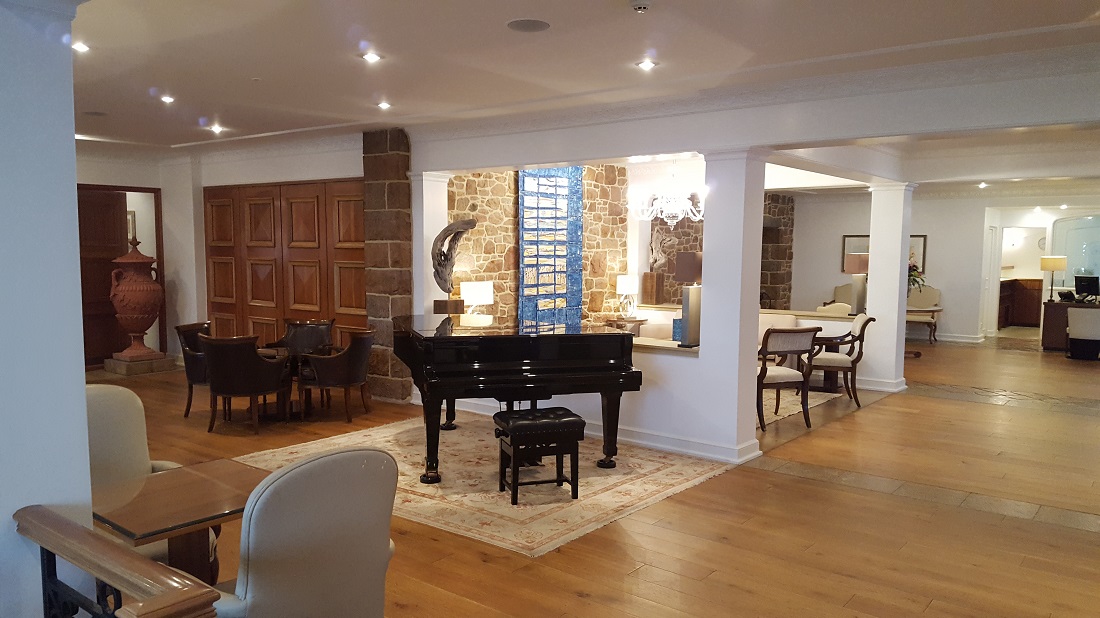 A baby grand piano sitting at the entrance to the hotel’s stunning Ocean restaurant adds a touch of glamour. Indeed, glamour is what the Michelin-starred Ocean is all about and the interiors are exquisite. It’s by far and away my favourite space in the whole hotel; the elegant pillars, French shuttered windows and blend of white, cream and beige with dashes of deep blues and reds conjure up a feeling of an Edwardian dining room – it’s a truly beautiful setting for a meal. It overlooks a delightful garden terrace and generous outdoor swimming pool, which was the next stop on my tour with Patrick. 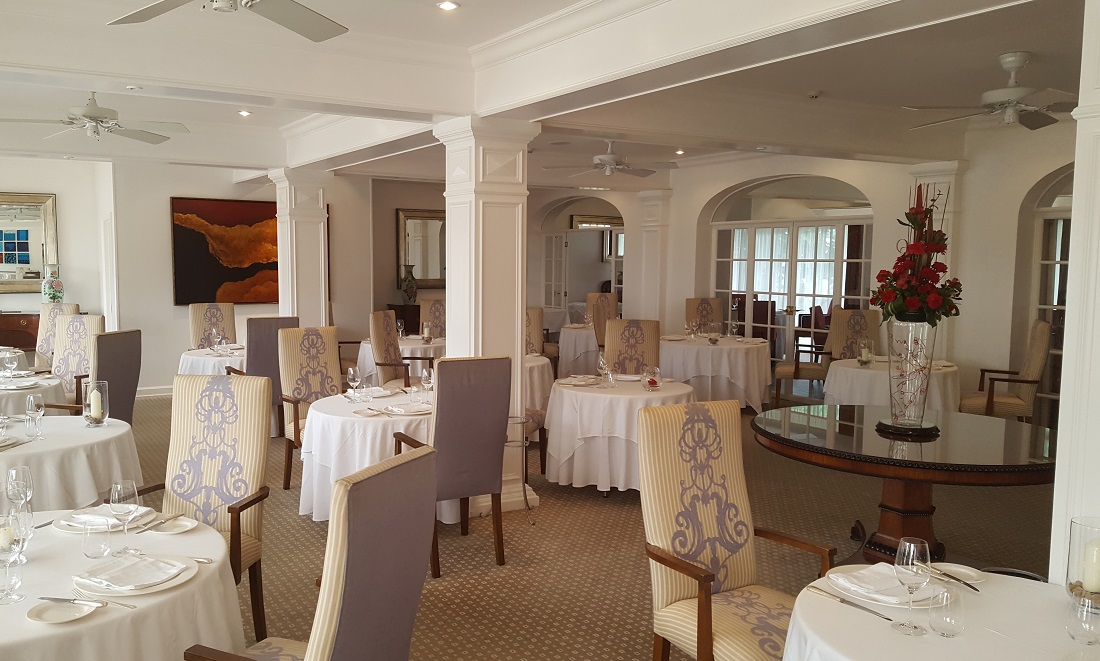 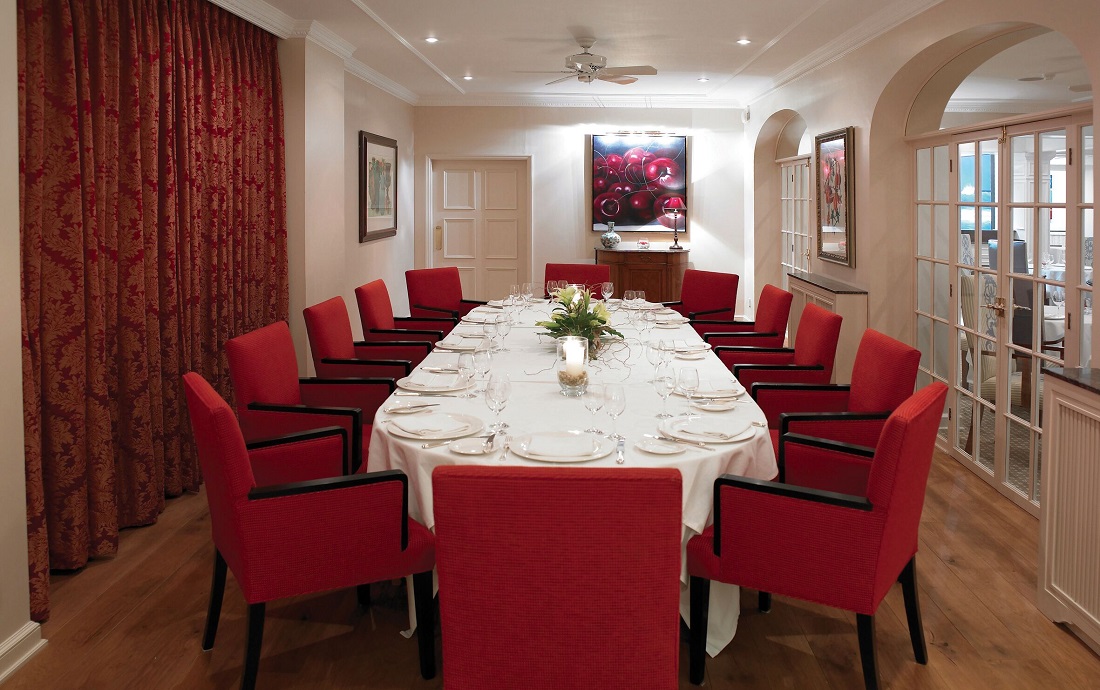 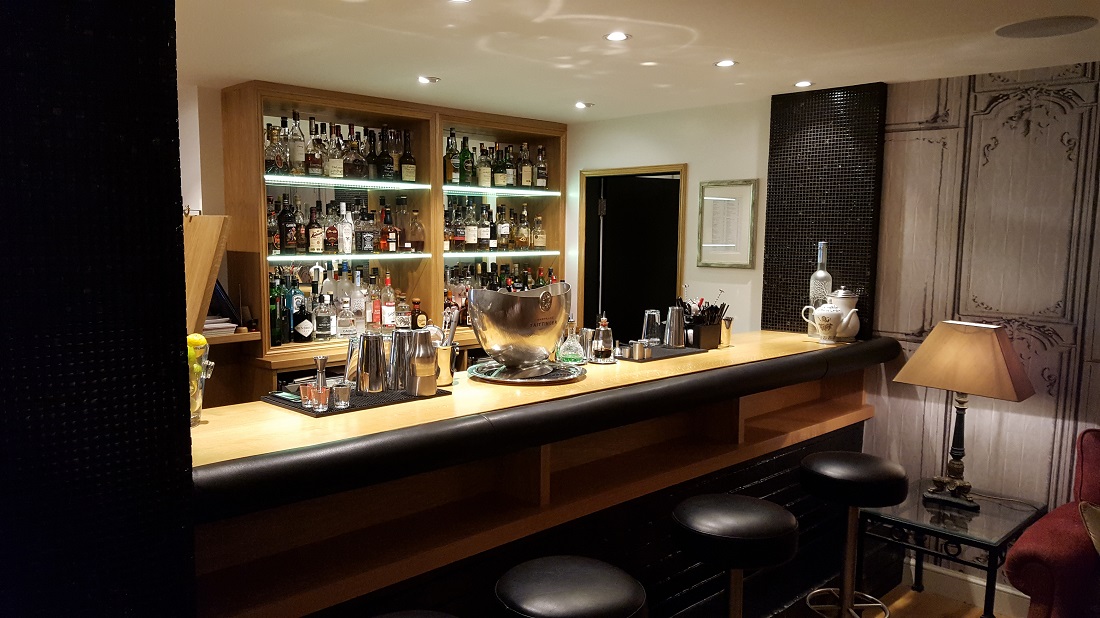 The pool area is reminiscent of a southern Mediterranean setting, not one just 50 minutes from London. Palm trees blend in with the stunning views over St Ouen’s Bay and the vast Atlantic expanse beyond – an enthralling sight so close to home. Our walk over the hotel’s 6 acres of grounds and headlands allows a glimpse of the tennis court as well as the Garden Suites – the deluxe offering at the Atlantic – which were fully occupied during my stay, but ‘extremely popular with families’ I’m told by Patrick, made up of ground floor rooms with large en-suite bathrooms and a private terrace with direct access to the gardens and swimming pool.

It’s at this point I discover a bit more about the journey Patrick has been on with the Atlantic. Having taken over as managing director in 1987, Patrick went about transforming the property into what it is today and in the process – through various strategy groups – the hospitality scene on Jersey as a whole. Indeed, this is clearly a labour of love for Patrick; under his stewardship the hotel has enjoyed numerous accolades such as membership of the Small Luxury Hotels of the World group (of which, Patrick himself is a director), AA rosettes and the prestigious ‘Independent Hotel of the Year’ at The 2014 Cateys – an award, I can see, that evokes a great sense of pride. Rightly so.

Jersey as a destination is in Patrick’s blood. He tells me of his work with the Luxury Jersey Hotels (LJH) consortium, a collection of Jersey hoteliers working together to bolster the reputation of the island as an internationally recognised hotspot for gastronomy and luxury. His obvious success led him to inaugurate the Eat Jersey Food Festival last year, which brings acclaimed chefs to the island from the UK, France and Jersey itself in a celebration of local produce. This is a way of life for Patrick, not just a job.

He tells me, when I ask about possible expansion plans, that maintaining the look and feel of the hotel as well as the aesthetics of the site are extremely important; so building upwards is out of the question. Consolidating what is already a fantastic property is the name of the game. The tour comes to an end, which allows me some time to sample the modest but perfectly adequate Palm Club health facilities comprising an indoor swimming pool, Jacuzzi, a mini gymnasium and saunas and a welcome option considering the less-than-summery conditions outside. 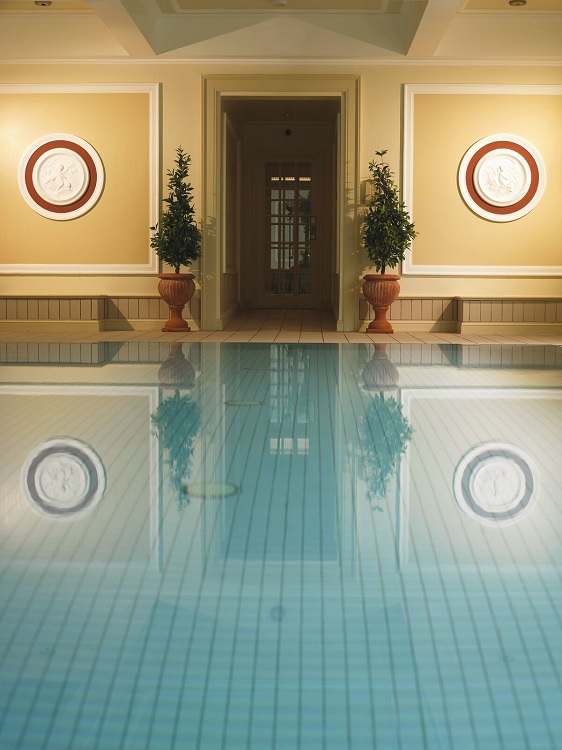 I retire to my ‘Ocean View’ room, featuring a king size bed with a simple, contemporary oak headboard, and comfortably elegant furnishings; the Art Deco-meets-maritime theme of the hotel is strong in the room décor. My room is well equipped with a marble bathroom, complete with high-quality, ever-functional Hotel Designs clients Hansgrohe fittings and luxury toiletries by Molton Brown. 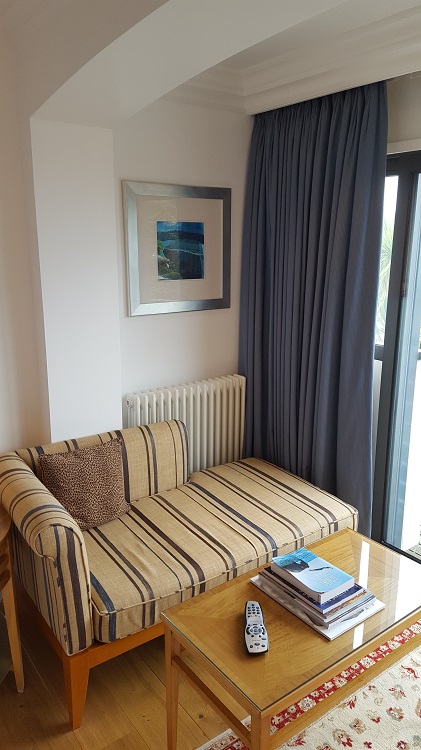 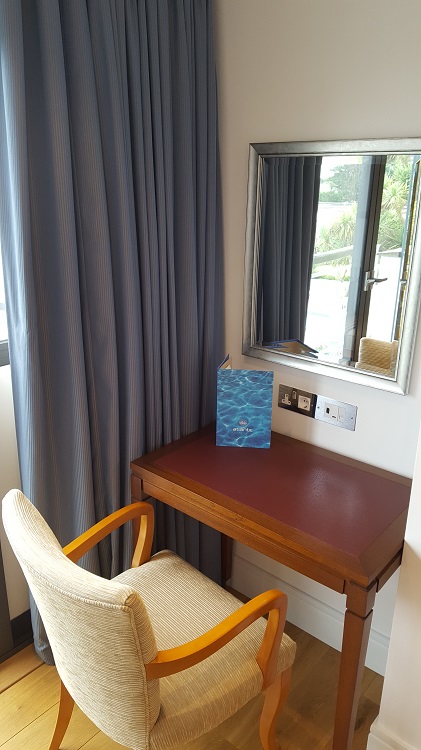 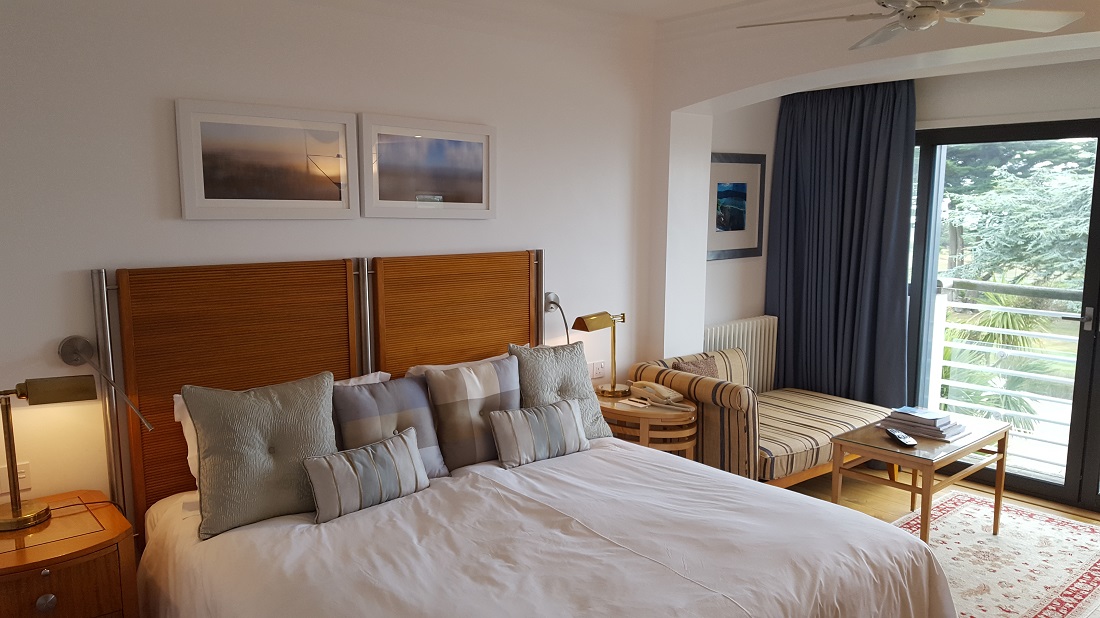 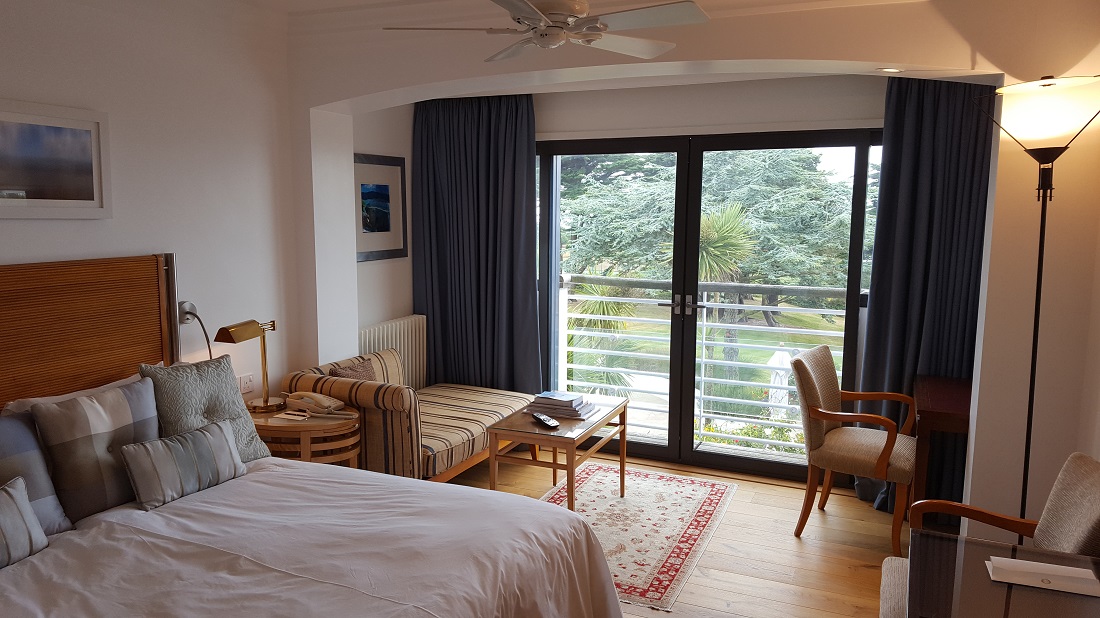 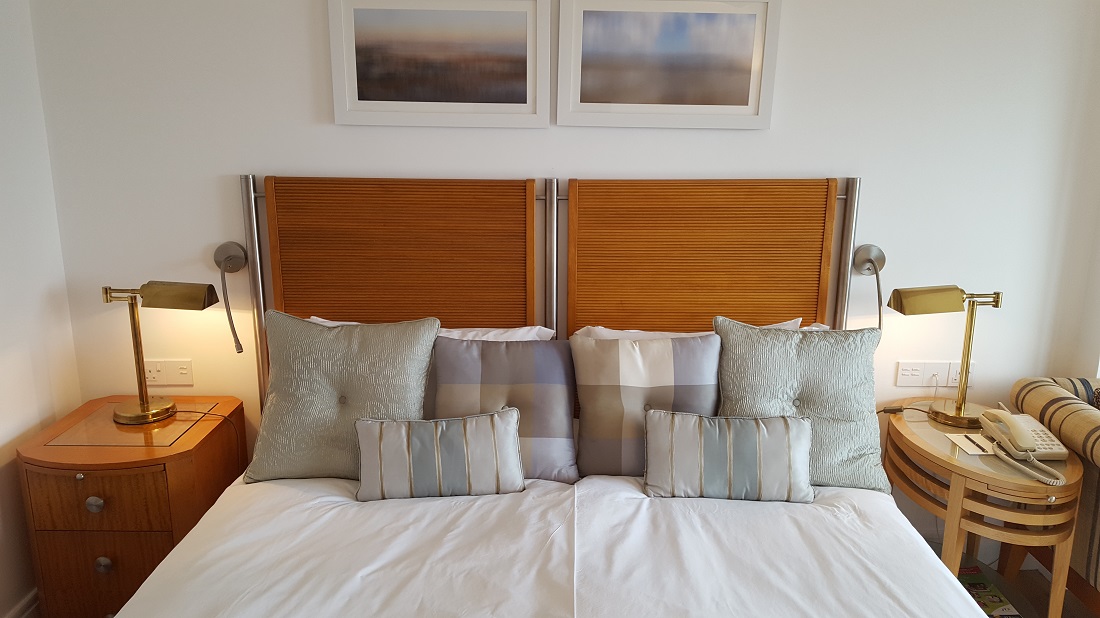 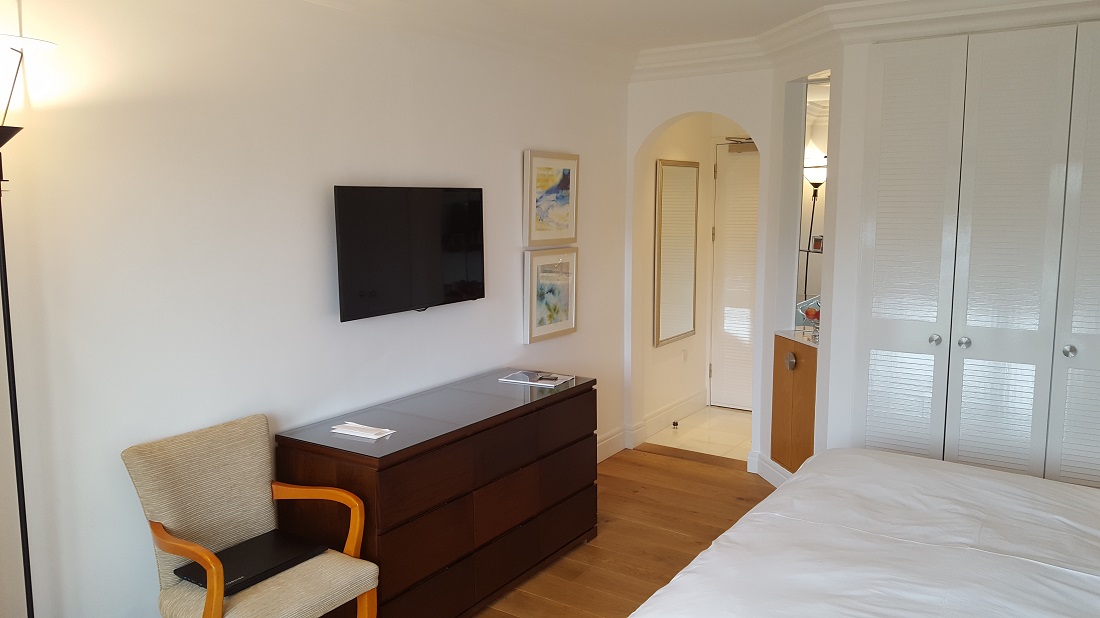 My balcony windows do indeed offer views over the swimming pool area and the ocean – it’s just a shame about the uncharacteristically cloudy July day. Considerable refurbishment work has been carried out over the years since the turn of the century as part of Patrick’s commitment to constant improvement and maintaining a high standard throughout. The hotel offers a range of rooms – including ‘Executive’ and ‘Atlantic’ suites – all finished to the same levels of unfussy elegance and practicality. 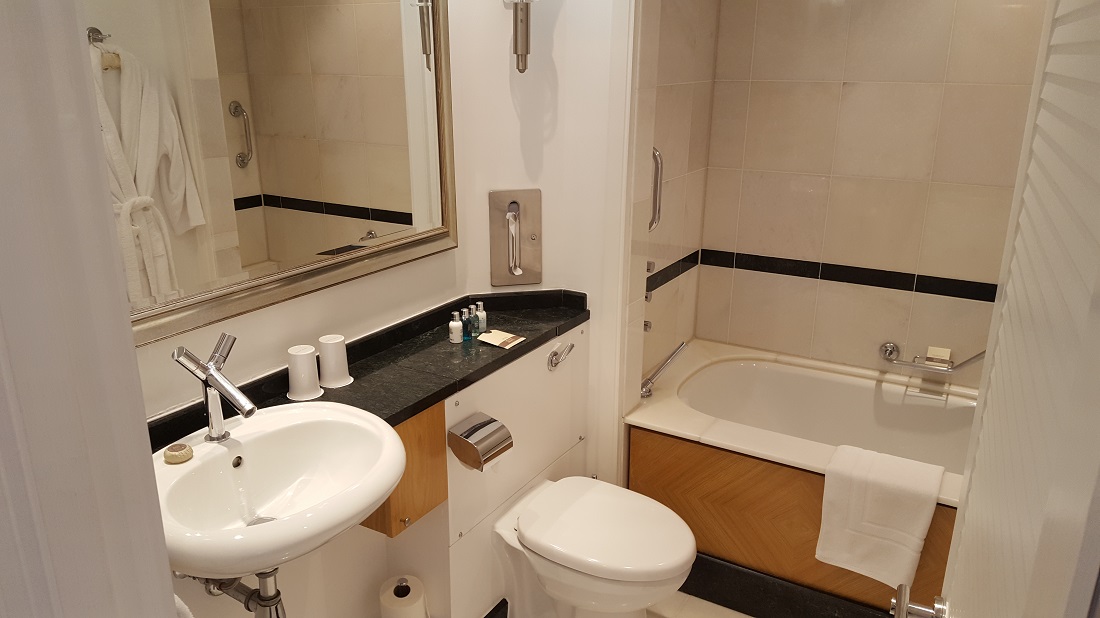 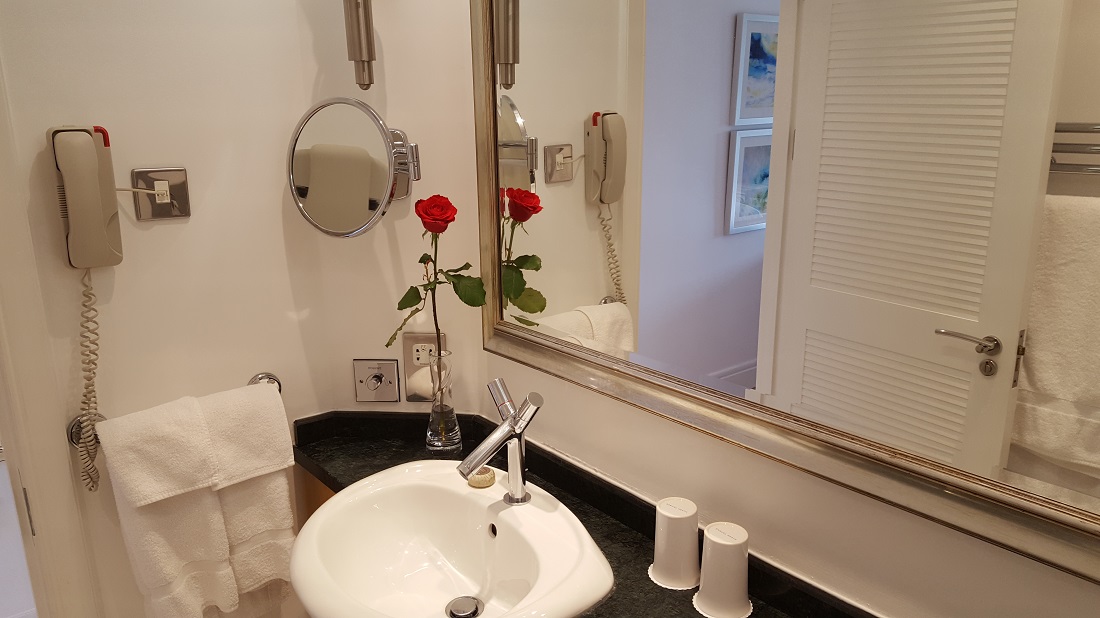 I spend an evening with Patrick and Treena over dinner in the hotel’s superb Ocean restaurant – fronted by the charming Martinho de Sousa and showcasing the supreme talent of chef Mark Jordan – which, having held its Michelin star since 2007, is a destination in itself. Combine the two, and staying at the Atlantic is most definitely an experience to savour. After lunch the next day in the hotel’s sister restaurant in nearby St Peter and a short time looking around southern Jersey, I take the short hop back to the mainland. I then proceed to spend the next few weeks telling anyone who’ll listen that they must find the time to visit this wonderfully idiosyncratic island and ensure that they stay at this gem of a hotel. 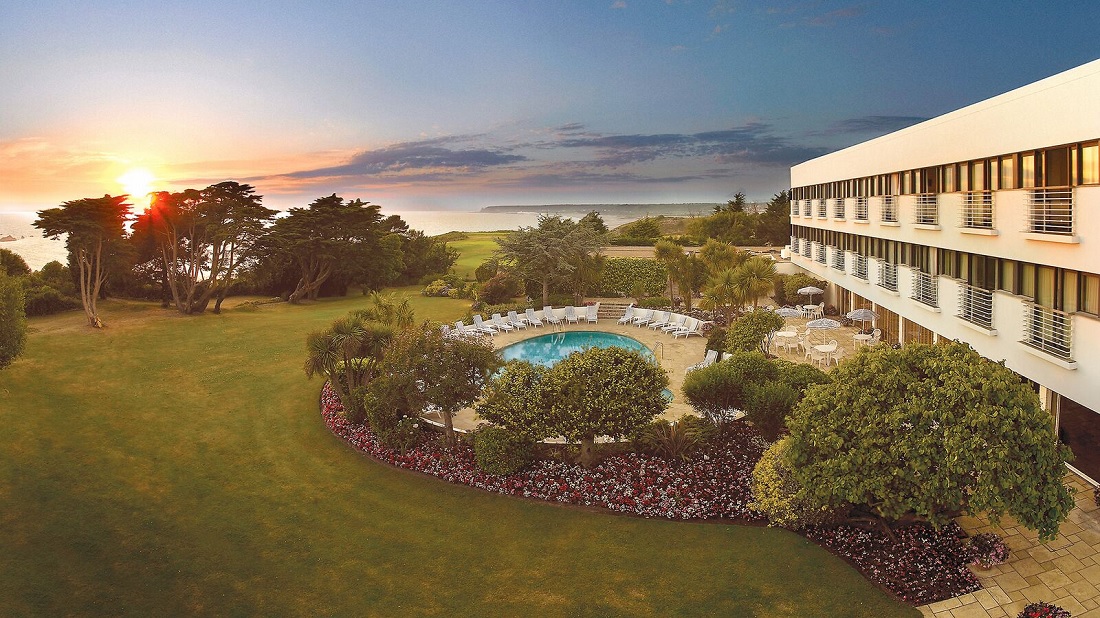 2020 will mark 50 years of the Atlantic. In his time at the helm, it’s clear to see that Patrick has firmly established the hotel as one of the best on Jersey. Having seen it first hand, I have no doubts that his passion for the industry and the locale as well as his dedication to quality and service that the property will continue to remain so in the years ahead. Trust me, one would be hard-pushed to find a more faultless example of what a small, luxury hotel should be…

Based on a stay in July 2016
Photos: Daniel Fountain // Atlantic Hotel
theatlantichotel.com