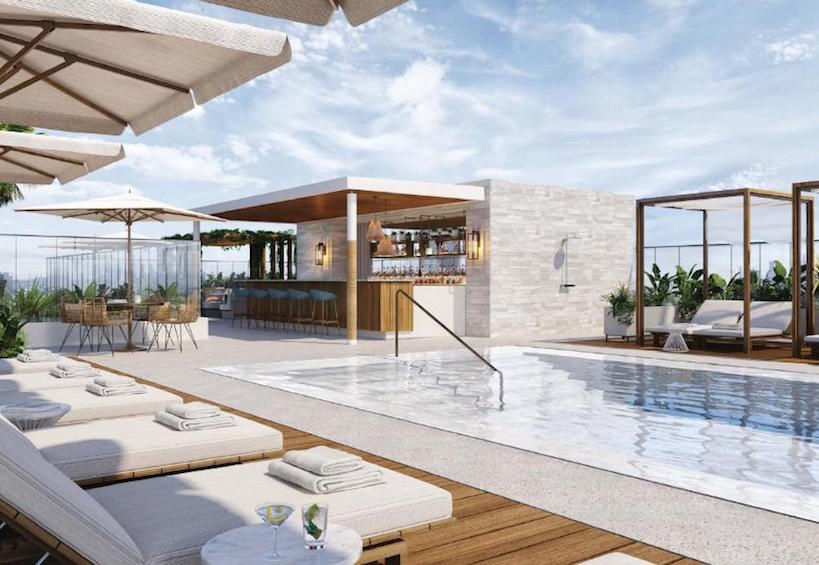 Hyatt Hotels has announced the debut of Thompson Hollywood, a luxury lifestyle hotel situated on Wilcox Avenue near Hollywood and Vine. A dynamic mix of global sophistication, hyper-local immersion and intuitive service, the prime location embodies the Thompson Hotels brand’s promise to provide guests with the ultimate “in-the-know” experience at the refined edge of travel. 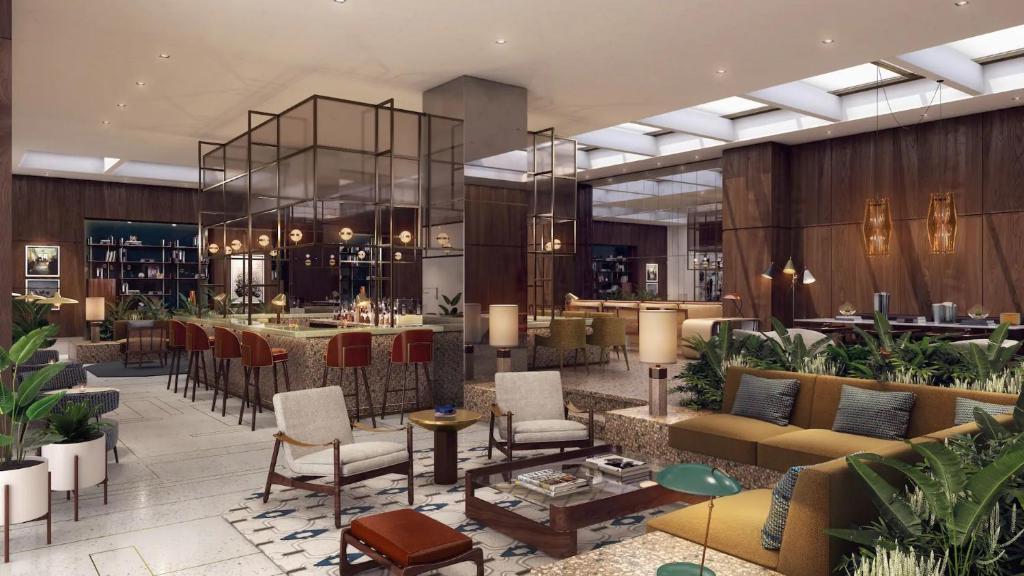 The new 11-story hotel features 190 mid-century-inspired guestrooms, including 16 suites, a sophisticated feature dining concept from acclaimed LA-based chef Lincoln Carson and Bar Lis, a destination rooftop lounge and pool with unparalleled city views. Sure to be a gathering spot for tasteful travellers and the eclectic Hollywood community alike, the much-anticipated project is owned by Relevant Group in collaboration with Steinberg Hart for architecture and interior design by Tara Bernerd & Partners, with Ten Five Hospitality overseeing food and beverage. The 11-storey hotel innovatively combines the hallmarks of timeless elegance with a raw industrial edge to create a unique atmosphere that is relaxing and inspiring, familiar and new.  The overall design is bold and confident, drawing upon the West Coast Modernist movement and a dash of Hollywood glamour as inspirations to seamlessly blend for a contemporary and elegant approach throughout.

Upon entry, a trellis-covered walkway beckons guests to a lobby adorned in mid-toned timber and teeming with verdant greenery, forming a tranquil and welcoming haven upon arrival. A spectacular custom terrazzo floor awaits guests underfoot, featuring an intricate metal inlay pattern that perfectly complements the elegant mid-century and contemporary furniture, bespoke Tara Bernerd & Partners rugs and inviting terrazzo reception desk. The convenient lobby bar – topped with a striking retro-green onyx – serves up coffee, cocktails or casual bites for those coming, going or staying to socialise, all with the laid-back hospitality and inclusive spirit emblematic of the Thompson Hotels brand’s desire to ensure everyone who walks through the doors feels more like a resident than a guest.

Throughout the property and into the guestrooms, floor-to-ceiling windows flood rooms with natural sunlight, offering sweeping vantage points of the Hollywood Hills and beyond, and immersing guests directly in the city’s bustling energy. Guest bathrooms feature walls and vanities finished in rich terrazzo amidst contrasting pale-tiled floors, while exclusive D.S. & DURGA amenities add another touch of luxury to the experience. An honour bar containing various curated selections, lustrous Egyptian cotton linens, 55-inch smart televisions, and a state-of-the art 24-hour fitness studio round out the other exceptional amenities that elevate every stay. 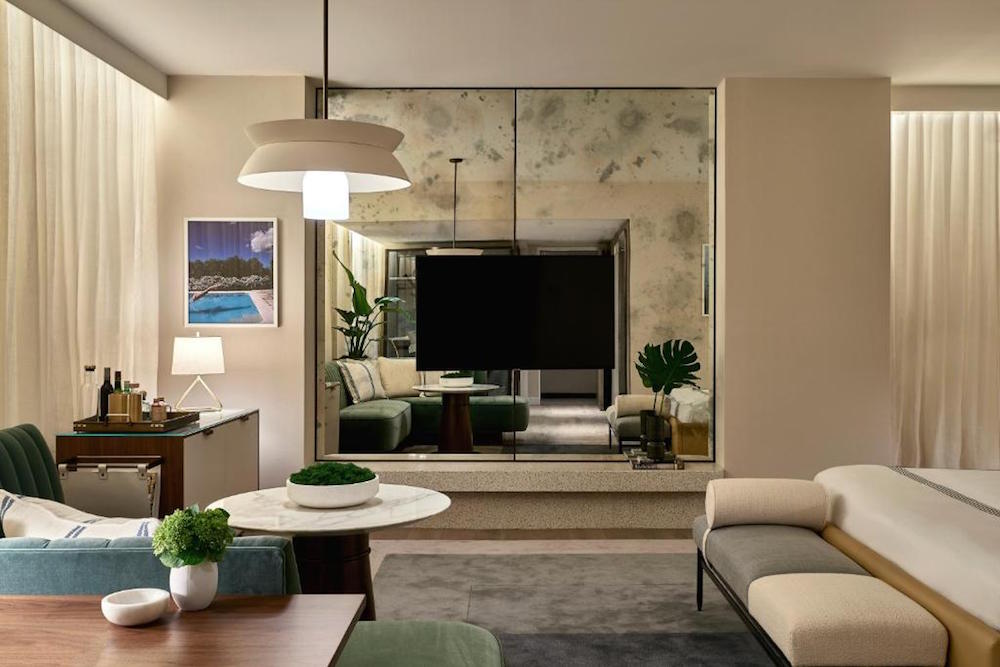 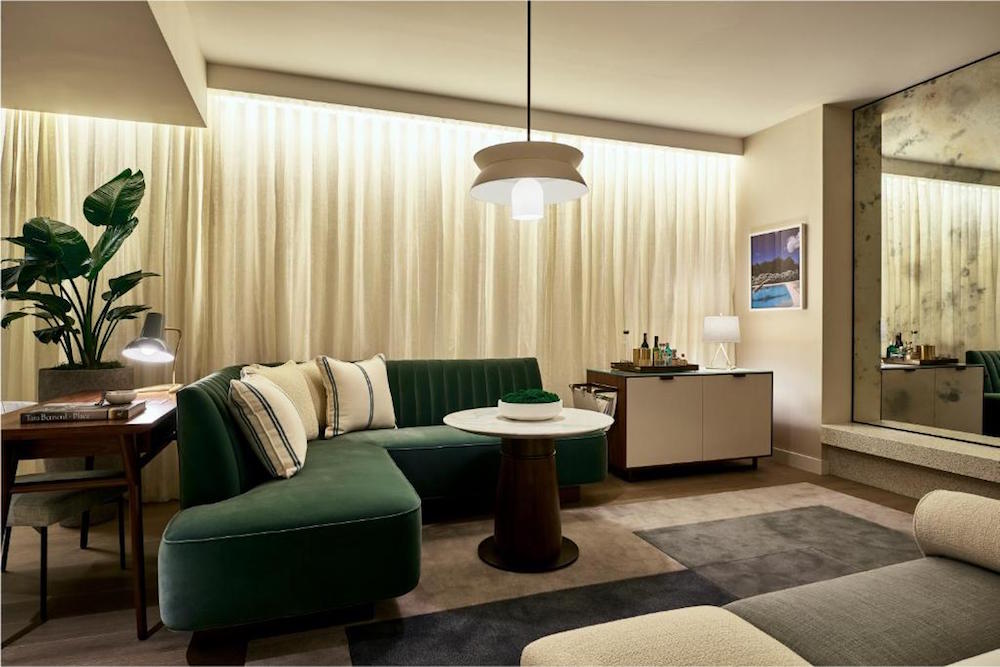 Through layers of inviting textures, timeless mid-century furniture and finishings, luxurious terrazzo details and a curated selection of modern art throughout, Thompson Hollywood redefines the notion of Hollywood glamour and is poised to become one of Los Angeles’ chicest destinations for culturally astute travellers and locals alike.

Designed by Bernadette Blanc, Bar Lis sits atop Thompson Hollywood, representing the crown jewel of the experience. Chic without pretention, the new rooftop lounge captures the iconic spirit and playfully sophisticated vibe of the Cote D’Azur. Serving inventive cocktails as well as fresh bites of locally sourced seafood, crudité and authentic bistro classics under the open sky, guests can enjoy Sunset Hour with unobstructed views of the Hollywood Hills, including the Hollywood sign. Bar Lis’ retractable roof ensures all-weather, all-year-round entertainment while a dedicated entrance with private elevator allows for more exclusive soirees. At night, Bar Lis comes alive with vintage and contemporary DJ sets, making it the perfect spot to top off the stay.

“Introducing Thompson Hollywood in one of Los Angeles’ most sought-after real estate market is a groundbreaking move for the hospitality brand,” says Grant King, Managing Partner of Relevant Group. “This property not only perfectly sits at the storied intersection of the technology, media and entertainment realms, but will inevitably heighten Hollywood’s visibility as a coveted hospitality destination.”

Located nearby to Sunset Strip, Runyon Canyon, the Hollywood Bowl, Griffith Observatory, Hollywood Boulevard, the Capitol Records Building and more, Thompson Hollywood sits at the very nexus of Los Angeles’ most appealing sites. The property joins other Thompson Hotels that are slated to debut in 2021, including Thompson Savannah, Thompson Denver, Thompson Buckhead and Thompson Austin.