After an environmentally-sensitive and inspiring rebuild, Wilderness Safaris’ Serra Cafema Camp, in Namibia’s extreme north-west, has reopened. Located in one of the most remote regions in southern Africa, on the banks of the Kunene River in the Hartmann’s Valley, Serra Cafema takes design hotels to new unexplored regions and offers life-changing journeys to this extraordinary desert location, ensuring the ongoing biodiversity protection of this pristine area and positively impacting the local community members of the Marienfluss Conservancy.

As part of a joint venture between Wilderness Safaris and the 300 000-hectare Marienfluss Conservancy –  owned primarily by the Himba people who are amongst the last semi-nomadic peoples on the planet – Serra Cafema is strongly rooted in a core Purpose or reason for being. 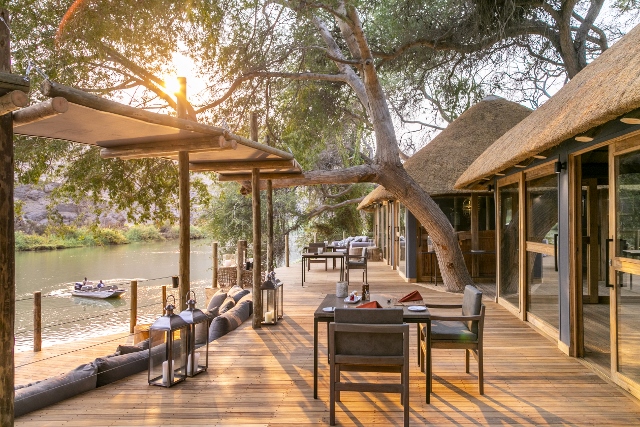 “It’s not just about luxurious accommodation and superlative local hospitality – that’s a given; it’s about exploring and conserving the vast, wild space of the Kunene area, gaining insight into the ancient, yet evolving culture of the Himba people, and looking inward, where guests are given the chance to reconnect with the earth and themselves. These elements define the luxury of space and the value of unique experiences”, said Alexandra Margull, Wilderness Safaris Namibia Managing Director.

“It is also 100 per cent solar powered, in line with Wilderness Safaris’ commitment to operating with as light an eco-footprint as possible.”

Each incarnation of Serra Cafema has explored and enhanced its relationship with the spectacular natural world around it. The new Serra Cafema takes this to the next level, where the concept for the camp is done with reverence and respect for the Himba community. The camp is comfortable, updated and modern, incorporating fresh elements, while retaining the heart and soul of Serra Cafema. It is also 100 per cent solar powered, in line with Wilderness Safaris’ commitment to operating with as light an eco-footprint as possible. 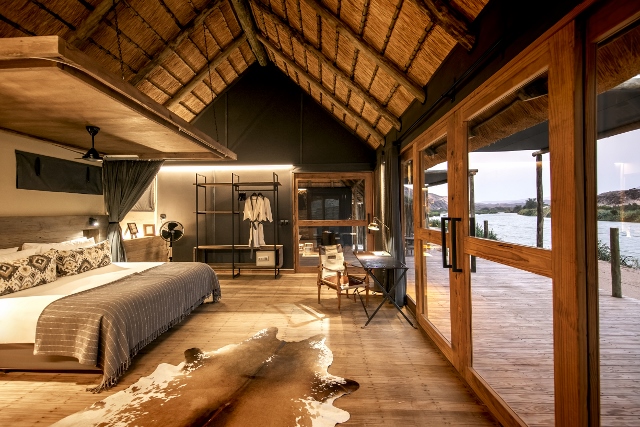 Natural materials that reflect the surrounding landscape have been used throughout the camp, with stone sourced from the adjacent valley used for feature walls and prominent defining structures. Each of the eight luxuriously-spacious guest rooms overlook the Kunene River and mountains of Angola beyond, and include a sunken seating area, an extra-large bed with a canopy and netting, indoor and outdoor showers, and a large private deck for private dining, and from which guests can enjoy the surreal sight of a river in the midst of a desert.

The main central area also overlooks the river and has a lower-level oval seated area that is ideal for night-time star gazing. Further celebrating local culture, the conceptual organisation of the main area emulates the structure of a Himba village. The buildings are arranged to connect to each other via different outdoor spaces, ensuring pockets of privacy within a larger cohesive whole. This arrangement allowed for the existing ana trees to be preserved and utilised as necessary shade.

The details within the camp are also uniquely Namibian. The servers and tables for the dining area were built by young craftsmen and women at TABLED, a social enterprise that gives orphans a future by involving them in crafting design furniture. In keeping with the Himba tradition of wearing and using leather, Wilderness commissioned Myeisha, a Windhoek-based company that provides training and employment for previously-unskilled local labourers, to produce rich, ochre-coloured leather menu, wine and room folders. Another local company, Mbiri, has, in partnership with a group of Himba women, developed a range of products based on the tradition of sustainably harvesting the resin from the Omumbiri tree (Commiphora wildii) and using it as perfume. From their harvester-owned processing facility in north-western Namibia, Mbiri has developed its first bathroom range which will be launched and used exclusively at Serra Cafema.

“These are just a few examples of our commitment to growing local talent and changing lives by providing support and encouragement to local suppliers, local artists and local culture”, Margull added. On the camp’s completion, all unused building materials were donated to the Marienfluss Conservancy to build a shelter at the local school.