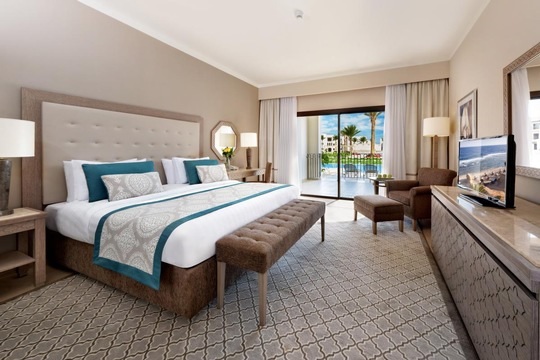 The Steigenberger Alcazar-Sharm El Sheikh in Egypt, a new built five-star resort located in the Nabq Bay directly on the Red Sea coast, opened for business this week.

Each of the 610 luxurious rooms is at least 46 square metres in size, 99 of them are swim up rooms with direct access to the pool. Twelve Junior Suites and two villas equipped with private pools offer even more generously proportioned accommodation.

Expansive gardens provide plenty of green spaces as well as containing three public pools and two for kids. Guests will also enjoy exclusive use of a 3000 square metre private beach to soak up the sun and the sea. The diverse underwater world surrounding the Sinai Peninsula is an ideal place to go diving and snorkelling.

The hotel offers numerous additional sporting facilities, both water and land based, as well as housing a spa and a gym. Five à la carte restaurants offer Asian, Lebanese and Italian specialities as well as grill- and seafood and several bars cater to all the guests’ culinary needs: An Ultra all-inclusive package is also available. A modern conferencing area is able to stage meetings and events of every kind.

One particularly attractive feature of the resort is its close proximity to Sharm El Sheikh Airport, which can, for example, be accessed in only ten minutes via the hotel’s dedicated shuttle bus service. The Steigenberger Alcazar-Sharm el Sheikh Resort is already the eleventh hotel which Deutsche Hospitality has launched in Egypt, and CEO Puneet Chhatwal is delighted with this new addition to the company’s portfolio: “The Steigenberger Alcazar-Sharm El Sheikh is a beautifully appointed and highly modern resort in an extremely desirable holiday region. Sharm El Sheikh represents a considerable enrichment of our hotel portfolio and is a facility which is bound to fire the enthusiasm of our guests.”