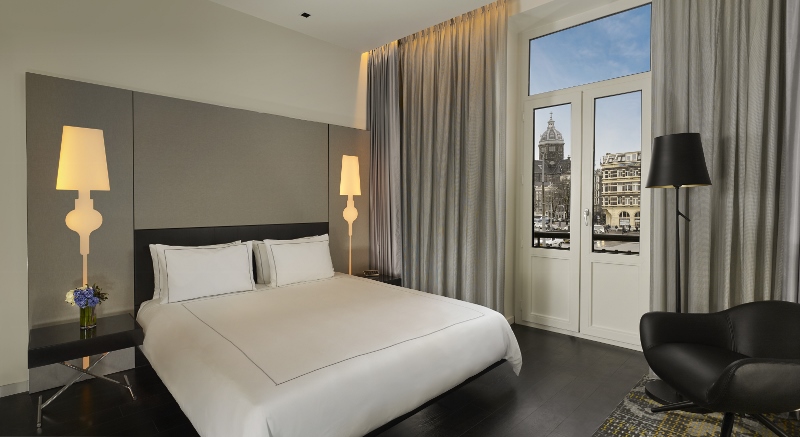 Following the announcement of the Independent Hotel Show marking its debut in Amsterdam next year, the vibrant city continues to prove its place as an international design hub as it witnesses the unveiling of Park Plaza Hotels & Resorts’ flagship Amsterdam property.

The upscale contemporary brand Park Plaza® Hotels & Resorts, which has over 40 hotels in worldwide city-centre locations, has unveiled  the re-launched flagship Amsterdam hotel, Park Plaza Victoria Amsterdam, after a multi-million-euro investment. The 298-room hotel, located in the heart of the city, officially revealed its new stylish, contemporary look.

The interior design of Park Plaza Victoria Amsterdam, led by Digital Space Designs, has been transformed to create a refreshed and sophisticated feel across the entire property, whilst respecting and retaining the historic architecture and long-standing charm the iconic listed building is known for. The guestrooms feature state-of-the-art technology, contemporary lighting incorporated in the headboards and large, luxurious bathrooms. In addition, all guestrooms have been furnished with Egyptian cotton bed linen and Elemis toiletries.

“We are delighted to announce the official launch of our refurbished hotel and can’t wait for guests to enjoy the elegance and sophistication,” Lennart Maas, Hotel Manager at Park Plaza Victoria Amsterdam comments. “Close to many of the attractions that Amsterdam is known for, and within walking distance of Central Station, it’s a very exciting time for us and we are thrilled to play a part in welcoming visitors to our wonderful city.”

“Since first opening its doors in 1890, the distinguished hotel has played host to famous guests including Louis Armstrong and Mata Hari.”

Park Plaza Victoria Amsterdam’s public spaces have also been restyled, including its nine meeting rooms, which offer a sophisticated location for professional occasions and hold up to 130 people. In addition, a Brasserie and VIC’s BAR will join the hotel’s swimming pool, sauna and fitness suite as an ideal location for unwinding after a day exploring the city.

Since first opening its doors in 1890, the distinguished hotel has played host to famous guests including Louis Armstrong and Mata Hari, alongside glamourous international fashion shows by designers Pierre Balmain, Christian Dior, Elsa Schiaparelli, Nina Ricci, Rochas and Pierre Cardin. Looking to the future, the hotel will continue to welcome a close link with the fashion and creative industries.

Conveniently located in the centre of the city’s buzzing shopping district and a two-minute walk from Centraal Station, Park Plaza Victoria Amsterdam makes a fantastic destination for short breaks. With many key museums and attractions also nearby, the hotel provides the perfect base for exploring enchanting Amsterdam as it continues to hold its position as one of Europe’s major design hub.