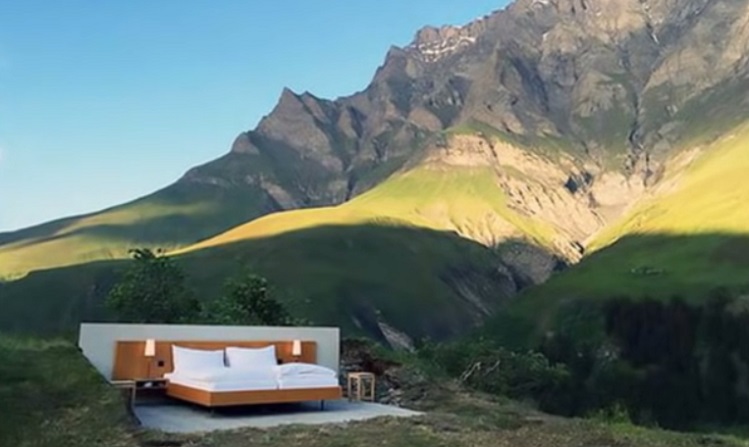 So getting the choice of bed, mattress and linens right takes thought and time. But if that’s the hotel’s only offering, you might think the hotelier’s job has been made considerably easier.

For ‘conceptual artists’ Frank and Patrik Riklin, that’s exactly what’s happened. With the help of hospitality professional Daniel Charbonnier, their latest brainchild is the one-room, open-air Null Stern ‘hotel’ on a Swiss mountainside. The room has no walls, no ceiling and – aside from a few side-tables and lamps – no amenities. Guests must use a public toilet some 10 minutes’ walk away…

It’s the second accommodation offering from the pair after they launched a similar, ‘zero-star’ project in an underground, former nuclear bunker. And this one is going for an eye-watering £154 per night – which does include a butler service.

Speaking to The Telegraph, Charbonnier said: “Even though this version is radically different from the first one in the nuclear bunker, the essence and the spirit of the concept remains the same.

“To put the guest at the centre of the experience and to focus on the intangible by reducing everything else to the minimum.”

Concepts come and unsuccessful ones go, but several have stuck around through the years – think boutiques or technologically-focussed properties. Personally, however, I do think this is one ambitious project too far. The unpredictably of European weather aside (you can cancel with short notice dependant on weather), a hotel is the sum of several smaller parts that go to make an experience for the guest.

Strip away amenities, décor, structures and staff – you can’t really call this a hotel. More a glorified and over-priced camping spot in a Swiss field. I’m all for innovation in hotel design and architecture, but call me old-fashioned I do feel that should include walls and ceilings…