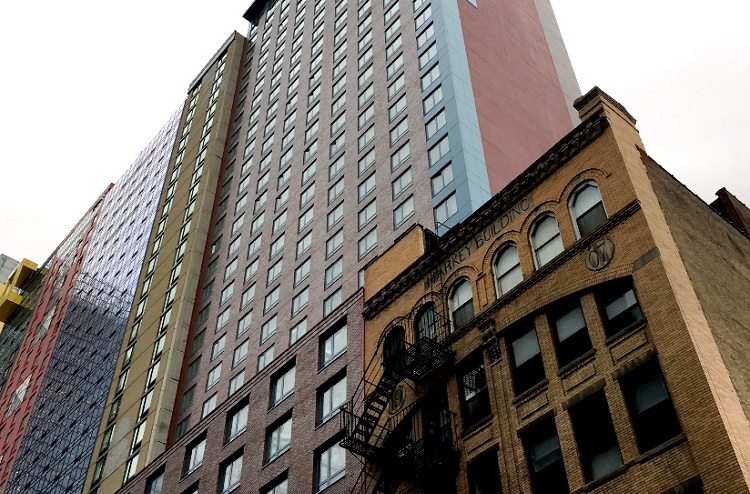 At more than 200,000 square feet and offering 612 rooms, the towering 35-storey DoubleTree is the largest hotel Gene Kaufman Architect has ever designed and the largest to open in New York City in many years. Its arrival follows the groundbreaking, in November, of another enormous Times Square-area hotel designed by the firm, a 518-rooom, 35-story Hyatt Place at 350 West 39th Street.

The new DoubleTree sports a dramatic façade. A red brick masonry street wall wraps around a courtyard that transitions to a setback tower. The tower’s slate blue windows and metal work take advantage of the uninterrupted western exposure to capture the illumination of the sunsets. 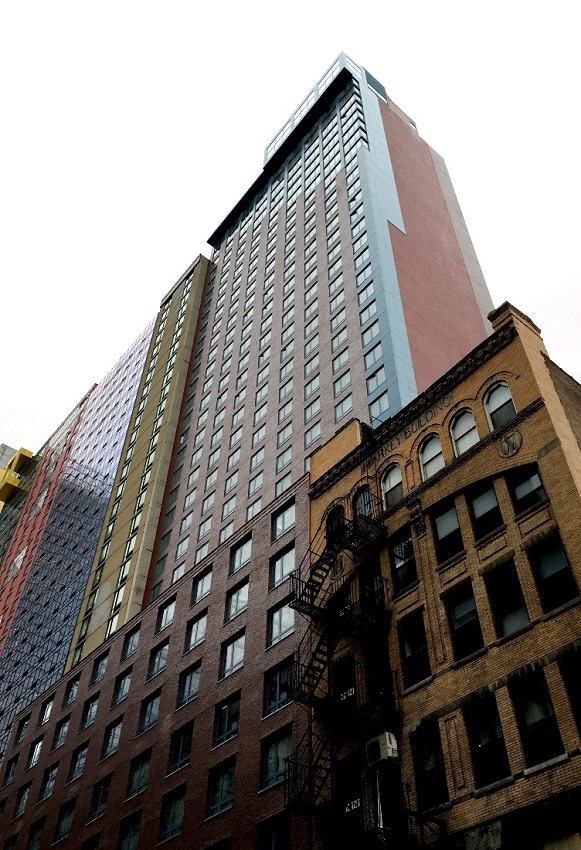 Said Gene Kaufman, founder and principal of Gene Kaufman Architect: “We are tremendously proud of the DoubleTree. It is not only our biggest hotel project ever, but the final touch for a block that we have helped to transform from a backwater into a fully integrated part of the bustling Times Square area.”

As the westernmost hotel on 40th Street the DoubleTree has upper-story guest rooms that offer unparalleled views of the Manhattan skyline, as does the hotel’s 4,000-square-foot Lovage Rooftop & Indoor Lounge. This dramatic glass-enclosed space boasts 17-foot floor-to-ceiling windows 36 stories above Times Square.

The two venues are the latest properties of Addison Hospitality Group, for which Gene Kaufman Architect’s interiors group previously designed the 5,000-square-foot Monarch Rooftop & Indoor Lounge at the Marriott Courtyard Herald Square that opened in 2013.

“I am thrilled to once again team up with New York City’s leading design house, Gene Kaufman Architect,” stated Ric Addison, president of Addison Hospitality Group. “There is an abounding synergy between both of our brands, which was evident in our collaboration on Monarch Rooftop & Indoor Lounge in 2013. Their ideas are fresh, cutting edge, and visionary, and I am confident that Magnolia Restaurant and Lovage Rooftop & Indoor Lounge will reflect their talent and creative sense of style that is uniquely their own.”