Inside a sustainable shipping container hotel in Chile 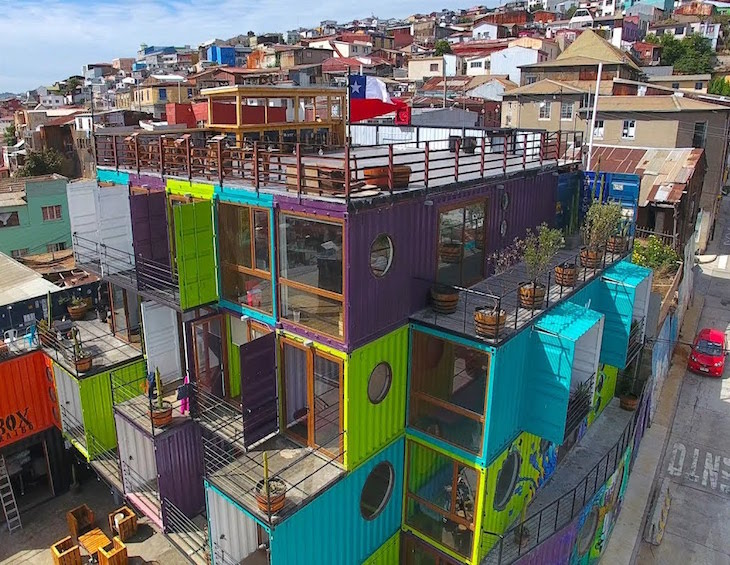 The Winebox Valparaiso was created by local winemaker, Grant Phelps, who claims to have opened the city’s first sustainable hotel and winery to be made out of shipping containers…

Capturing one of Valparaiso’s most eye-catching architectural displays, The Winebox Valparaiso is a fully sustainable aparthotel and winery that is sheltered within 25 decommissioned shipping containers.

Self-designed by hotelier and winemaker Grant Phelps, the aparthotel and winery features 21 graffiti-styled guestrooms, two public terraces and even the city’s debut winery.

Perched at the top of one of the city’s vibrant undulating hills, the aparthotel which opened last year offers panoramic views over the city. The industrial-like guestrooms are long, narrow and either offer porthole windows or larger terraces, both of which allow natural lighting to fill the space. Designed with young adults in mind who are seeking adventure, the interiors are fully sustainable and are complete with quirky and loud accents that reflect the city’s edgy graffiti qualities. Natural materials such as wood pallets have been used to create headboards and mirror frames, while recycled wine bottles have been used to create mood lighting.

Phelps, who is as much the creator of the aparthotel as much as he is service provider, wishes to educate his guests checking in on living sustainably. In a hotel review conducted by the New York Times, he revealed that his vision of the hotel was inspired by the way in which “Christchurch used shipping containers to rebuild after New Zealand’s 2011 earthquake.”

The hotel, which prides itself on offering alternative accommodation with attitude, is a disobedient take on modern hotel architecture. Throwing the rule book in the bin, The WineBox is anything but conventional as it attracts tourists to see the city from alternative lenses.