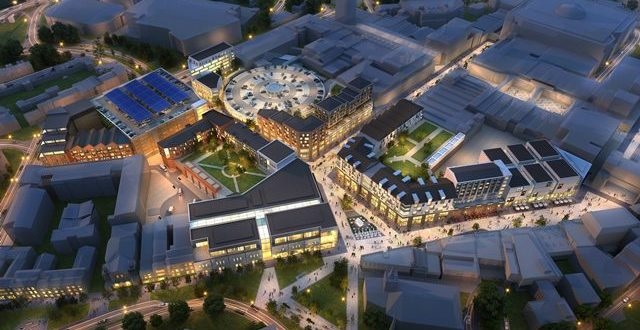 Plans for a hotel and new restaurants in Coventry have been revealed as part of a £360m development at City Centre South.

Coventry City Council has approved the appointment of the Shearer Property Group for the 818,000-sq-ft mixed-use development in January. The firm has already worked on schemes such as the Parkway shopping centre in Newbury, the Grand Arcade in Cambridge and the new restaurant quarter at Cathedral Lanes in the city.

City Centre South will transform some of the oldest areas of the city centre, including Bull Yard, Shelton Square, City Arcade and Hertford Street, into a development that includes a department store, retail units, restaurants and a hotel.

The hotel and restaurants will be located in the leisure part of the development in Hertford Street, linking to Broadgate Square. The development is hoped to be open for business by 2022.

Councillor George Duggins, leader of Coventry City Council, said: “When you look at all the changes happening around Coventry and see the ambitious plans for City Centre South, it shows there are great times ahead for our city.”

Guy Shearer from the Shearer Property Group added: “We are thrilled to have been chosen by the city council to deliver this vitally important regeneration project. This site lies in the very heart of the city centre and is huge by any standards – about the size of 10 football pitches. It finally provides the opportunity to deliver a transformational scheme that will put Coventry back on the map as a retail and leisure destination.”