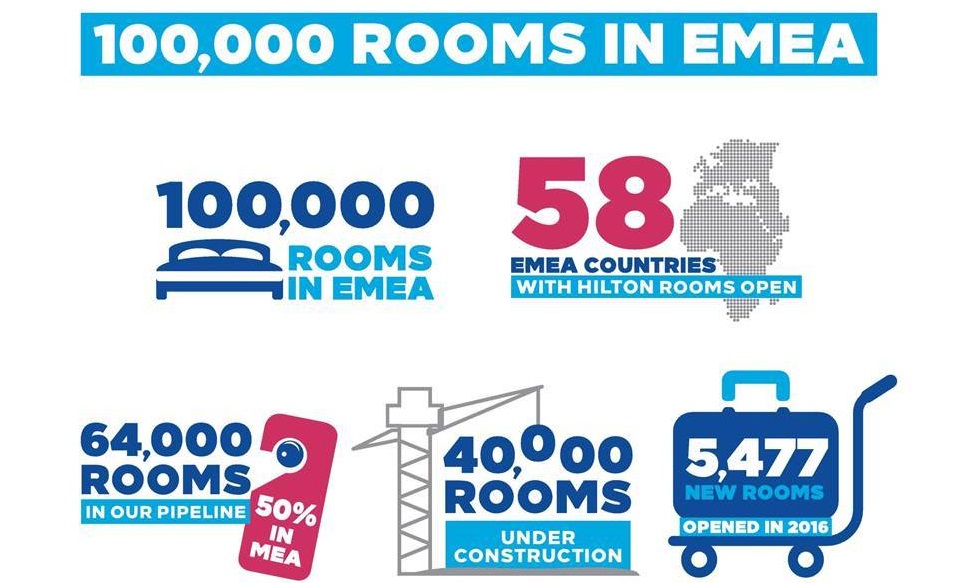 At this year’s International Hotel Investment Forum in Berlin, Hilton has announced that it has passed the milestone of 100,000 rooms trading across its Europe, Middle East & Africa portfolio.

The news comes in a period of unprecedented global growth for the company. In EMEA specifically, this has seen net unit growth of more than 20,000 rooms in the past three years, a trend which is set to continue with close to 40,000 rooms currently under construction and expected to open by the end of 2020.

Patrick Fitzgibbon, senior vice president, development, Europe, Middle East & Africa, Hilton said: “Reaching 100,000 trading rooms is a significant milestone for us as a company, particularly given the quality and breadth of Hilton’s portfolio in the region. Our development journey in EMEA continues to set the pace for the industry – with over 60% of our pipeline rooms already under construction.”

Brand Highlights:
– A burgeoning pipeline is set to double the number of Hampton by Hilton and Hilton Garden Inn hotels over the next three years
– This year has also seen Hilton’s upscale DoubleTree by Hilton brand open its 100th property in the region, (DoubleTree by Hilton Madrid Prado)
– The city of Reykjavik, Iceland became home to the world’s first Canopy by Hilton in 2016
– Curio – a Collection by Hilton has already accumulated 16 trading and pipeline properties in EMEA.

Fitzgibbon added: “In the last decade we have introduced five new brands to the market which have allowed us to kick-start growth in a variety of segments, with our mid-market and economy brands now trading or under development in more than 200 locations. We have also successfully launched our collection brand, Curio, as well as continuing to build our core Hilton brand and luxury offering. Owners of our hotels were rewarded with the highest occupancy rates recorded in our history across the globe last year, 2017 is set to be another milestone year for Hilton in EMEA.”