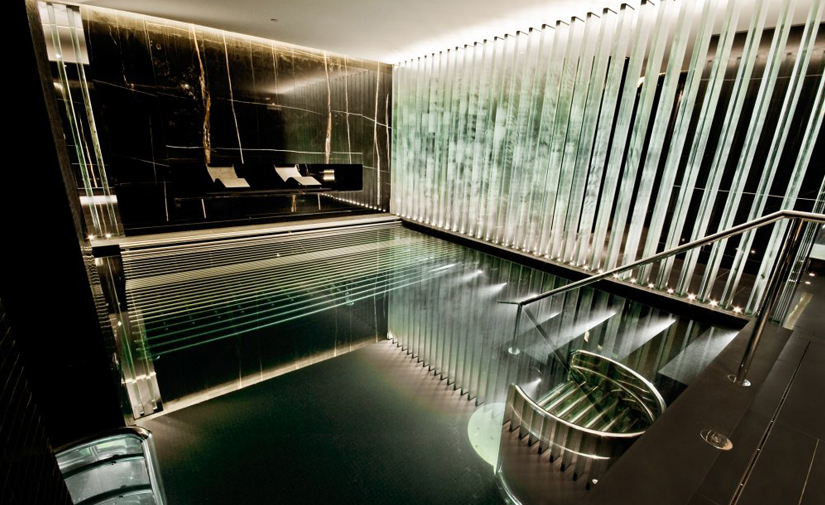 Between the years of 2013 and 2015, Global Wellness Institute (GWI) concluded that the wellness travel market grew by a whopping 10.6 per cent to be worth an estimated US$563.2 billion. With that trajectory expected to rise even further, as GWI predicts that the wellness tourism will grow to be more than a US$800 billion industry by 2020, spa concepts and the core designs around spas are arguably the windows to new clientele.

As a result, spa design within the hotels to reach that ambitious five-star status is hot on the mind of designers, architects and hoteliers – and rightly so. As the spa becomes the spirit of the hotel, here are some awe-inspiring hotel spa concepts that have the ability to transform guests into another world whilst checked in. 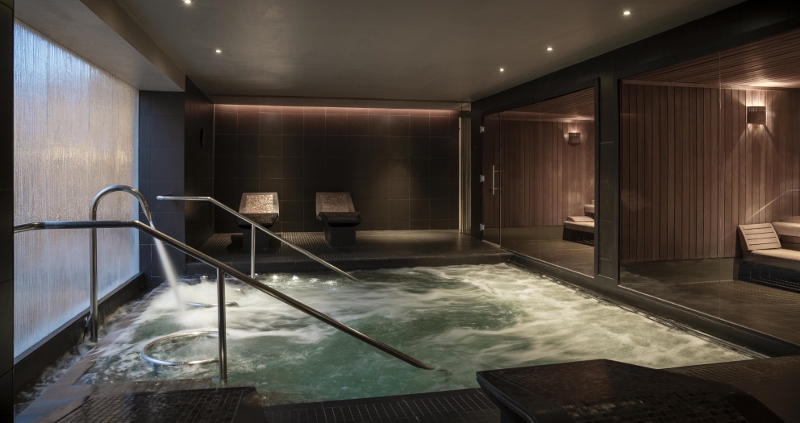 In its majestic position underneath Scotland’s Ochil Hills, Glenagles’ escape doesn’t get much better than its spa. Designed by the great Sue Harmsworth, ESPA at Gleneageles was named last year as Britian’s best spa by The Good Spa Guide. As Scotland’s pre-eminent destination spa, it has been designed symmetrically to keep male and female areas separate.

Visitors to the spa can de-stress in the soothing surroundings of the central courtyard, enjoy indulgent heat and thermal experiences before or after their treatment, or enjoy a snack at The Spa’s café. Considering the majestic settings and the grand 1920s main building, the hotel is surprisingly modern with all the right levels of luxury. 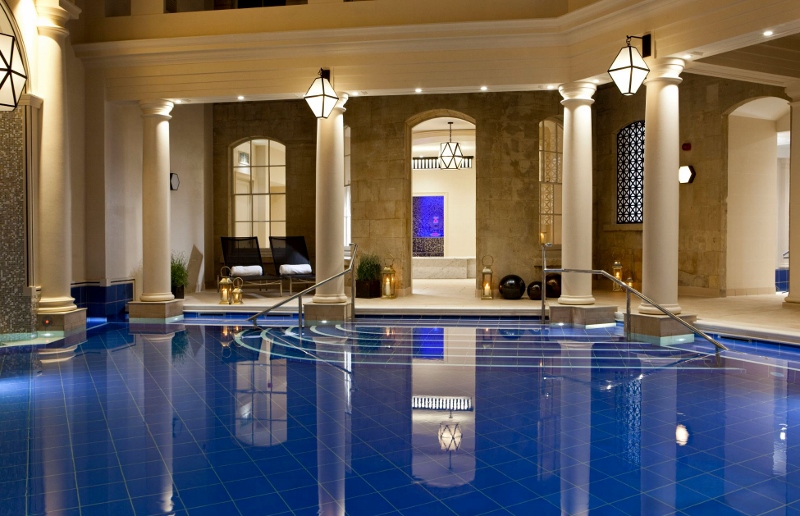 As Bath’s only hotel that taps into the city’s natural thermal springs, The Gainsborough is in a league on its own in the South West.

The spa’s design fuses modern elements with traditional architecture typical to surviving examples of Roman Baths. At its heart are three healing pools of warm thermal water beneath a contemporary glass atrium. The spa is spread over two levels. On the lower level there are treatment rooms, an ice room, infra-red sauna, traditional sauna, steam room, luxurious men’s and ladies changing rooms and the thermal pools. Respecting the historic Roman tradition, each pool is a few degrees warmer or cooler than the next and are to be experienced – as they were in Roman time – in sequence.

Between the columns of the Romanesque colonnade and feature wall surrounding the largest of the pools of the Bath House, are niches clad in custom glass mosaics in blue and grey. Designed to reflect the thermal water and the Bath sky beneath the glass roof above, bathers will sit amongst the columns enjoying massaging jets of therapeutic water. Above, three contemporary interpretations of Georgian lanterns illuminate the Bath House, adding another contemporary edge to the spa’s design. Elsewhere, a Roman mosaic floor, uncovered during 19th century archaeological works and sealed beneath the surface, has been replicated above.

On the second level, linking the Gainsborough to its sister YTL property, Green Leaf Niseko Village, in Japan, a Tatami and a VIP room complete with an Ofuru-style tub (a wooden Japanese soaking tub accented with river rocks) is a feature element honouring the Asian hydrotherapy tradition. Ensconced further within is a cloistered space called the Fountain Room where guests are invited to taste the mineral-laden thermal water – a practice known to Roman bathers in Bath – and to meditate on a waterfall in contemplative solitude.

Another Harmsworth-inspired retreat, the ESPA at The Corinthia London is the largest hotel spa in London and is, bizarrely enough, located just metres away from one of the city’s most iconic landmarks, Trafalgar Square. Arguably, that’s what makes the experience that much more special and surreal.

The spa which spans across four floors (reception and spa lounge, thermal floor, treatment floor, gym) is the perfect escape from the city above. The gateway to luxury starts at the reception area. Deliberately narrow corridors leading towards the thermal floor evoke the feeling of escaping into an underground world. Seamless ceramic doors camouflaged in the walls make every turn feel like an exclusive experience. Meanwhile, the roaring fires placed around the venue compliment the dark hues of blues and blacks. As well as creating drama, the concept of fire also cleverly breaks up the space without using walls.

Located underneath the hotel, and the busy streets of the capital, the spa includes a swimming pool – which sits below a large glass amphitheatre sauna, an ice fountain, a vitality pool, heated marble sun loungers and private sleep pods.

Dedicated to natural wellness and inspired by its forest surroundings, Herb House instils a sense of calm, well-being and serenity – it’s the perfect chilling retreat.

Herb House has a largeSauna and indoor Hydro Pool with stunning forest views, a mud house, a steaming outdoor hot pool, eight spacious single treatment rooms and two magnificent double treatment rooms – the perfect place in rural England to escape from the world in the heart of the New Forest. 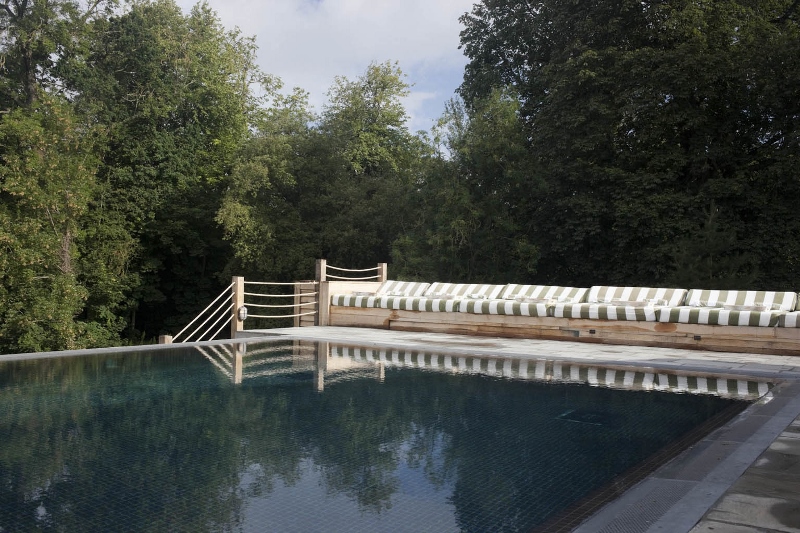 Set in the heart of Somerset, Babington House was designed with the stressed-out city goers in mind. The relaxed and typical ‘Soho House’ colour scheme of green and white stripes marries nicely with the honey-coloured facade of the main building that sits behind. The ‘rustic-chic’ Cowshed spa is surrounded by stunning vistas of the Somerset countryside. Facilities include two heated pools (one inside and one outside), sauna and steam room.

To celebrate the best of British in the hotel design industry, Hotel Designs has now opened up nominations for this year’s Brit List. The Brit List will amplify Britain’s top interior designers, hoteliers and architects. Click here for more information.