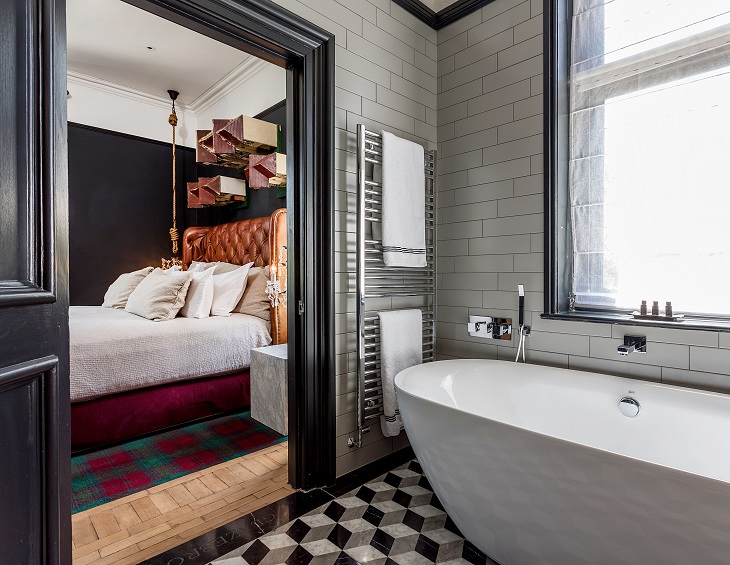 Checking In: Down the rabbit hole in Devon’s Glazebrook House Hotel

When Peter and Fran Hamman, the owners of Glazebrook House Hotel, originally embarked on their tremendous journey to open a statement luxury boutique hotel in South Devon, they were faced with several key decisions to make.

The first, and arguably the most important: who was going to design the interiors of the hotel to help turn bring to life their vision of an Alice-in-Wonderland-themed hotel? If there was anyone who qualified in sensitively making this dream a reality it was internationally renowned British revivalist designer Timothy Oulton, a somewhat obvious choice considering his quirky portfolio of work.

Oulton’s alternative, somewhat edgy charm can be felt immediately upon entering the hotel’s lobby. Two statement chandeliers hang from the tall ceiling above a deliberately distressed-looking rug. On one side of the room, past a striking chesterfield sofa, is a white sculpture of a young Queen Elizabeth. On the other side, past two clashing metallic armchairs, and above the mantelpiece are the hulls of mini boats hang on wall, injects a subtle sense-of-place. Meanwhile, an oversized, eye-catching union jack curtain hangs behind an understated check-in desk. 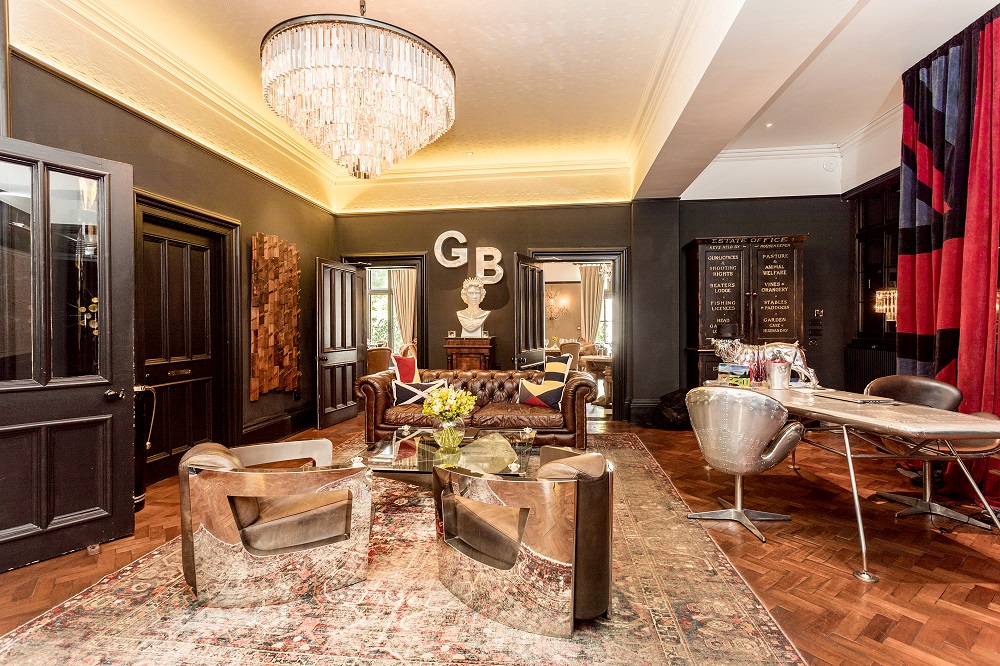 Since opening in September 2014, the hotel has become as famous for its food and beverage offering as it has its award-winning design. The elegant, intimate F&B area is balanced precisely with refined parquet flooring and reclaimed British oak tables, which adds an element of welcome authenticity. Fun details such as British-made china and shining silverware trays create a bold yet brilliant choice of wallcoverings. Across the hall, an equally impressive bar area spills out onto a sun-trap terrace and connects to the cigar room, which features a sculpture of Winston Churchill smoking an illuminated cigar aptly positioned next to the liquor cabinet. 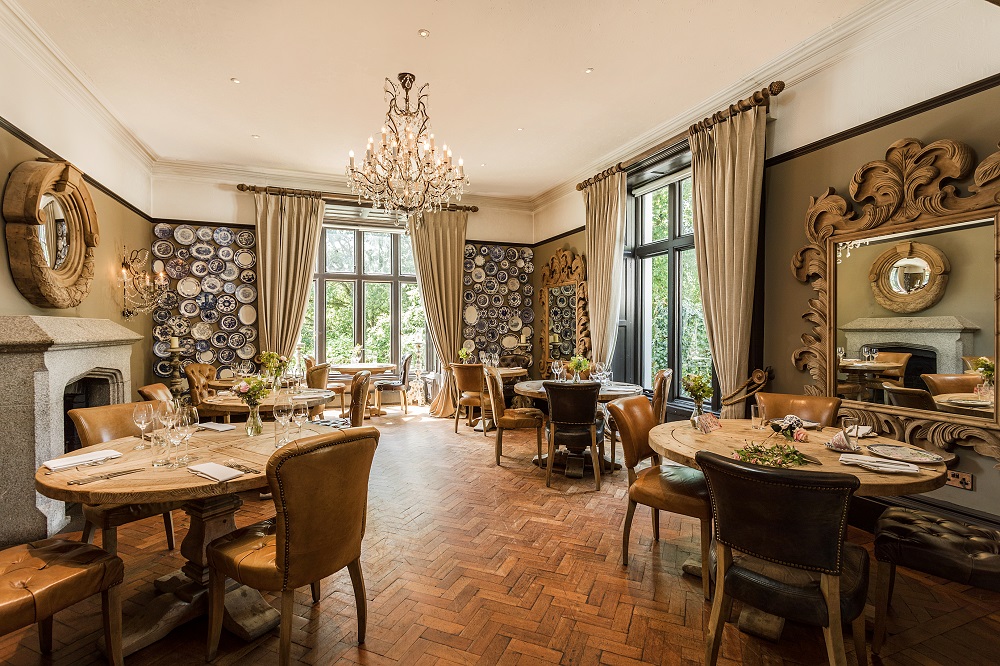 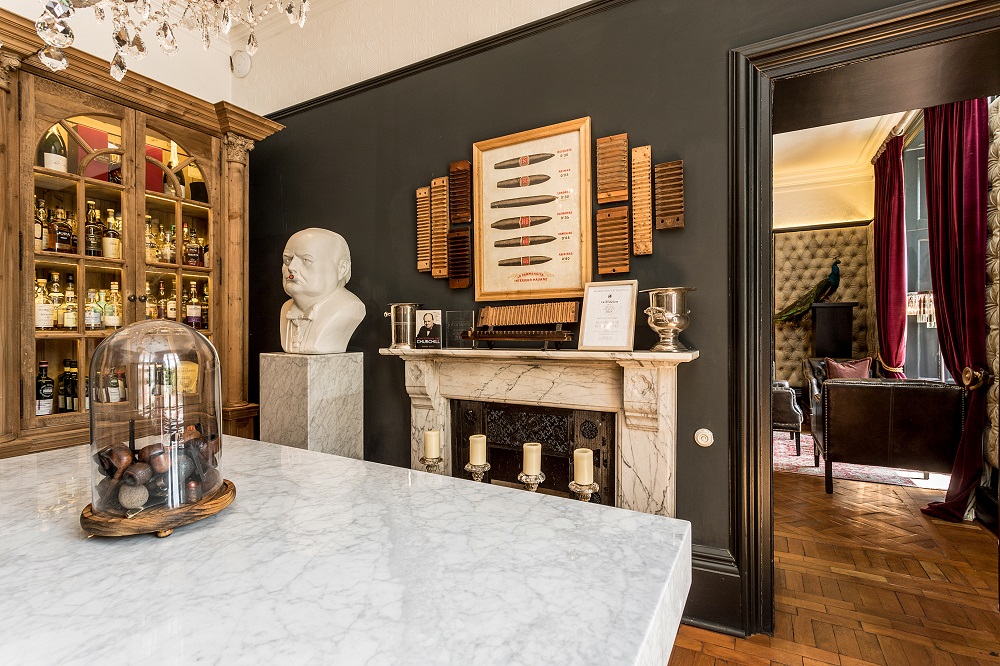 While corridors in some hotels naturally become a dead space that lack design and inspiration, Glazebrook House the hotel embraces the unconventional. Bizarre artefacts hang proudly on the walls, such as traditional horns and Oulton-style bowler hats. The landing is also a clash of ideas working together in harmony. A feature wall of traditional street signs reflects the main staircase, while furniture designed to be a nod towards Britain’s equestrian style – think upside-down saddle-inspired armchairs – create a relaxed yet refined feel.

“My nest for the evening, The Mad Hatter Suite, is full of idiosyncratic moments.” 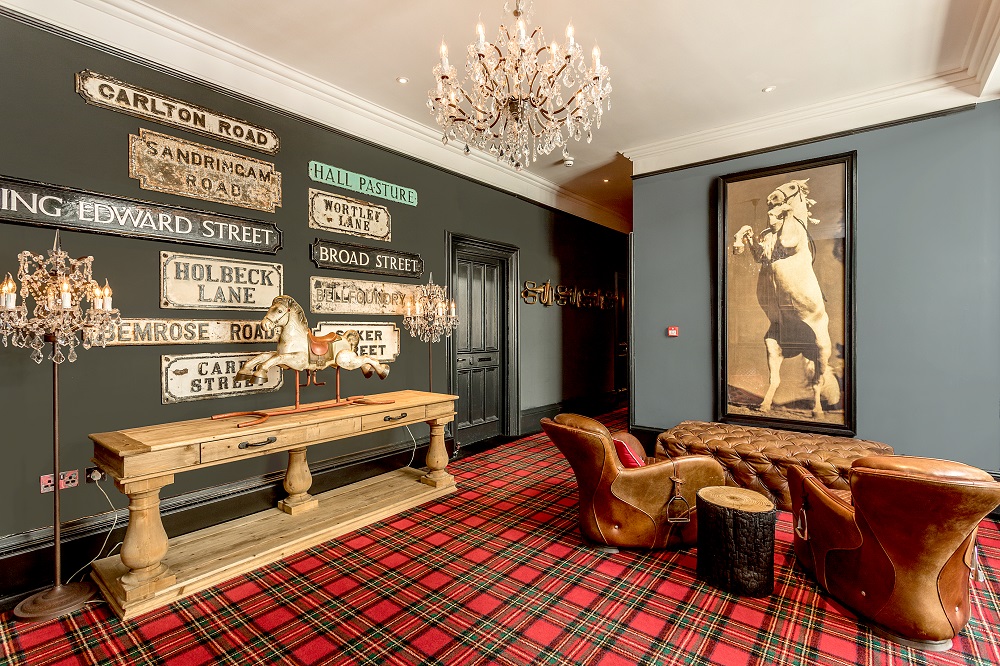 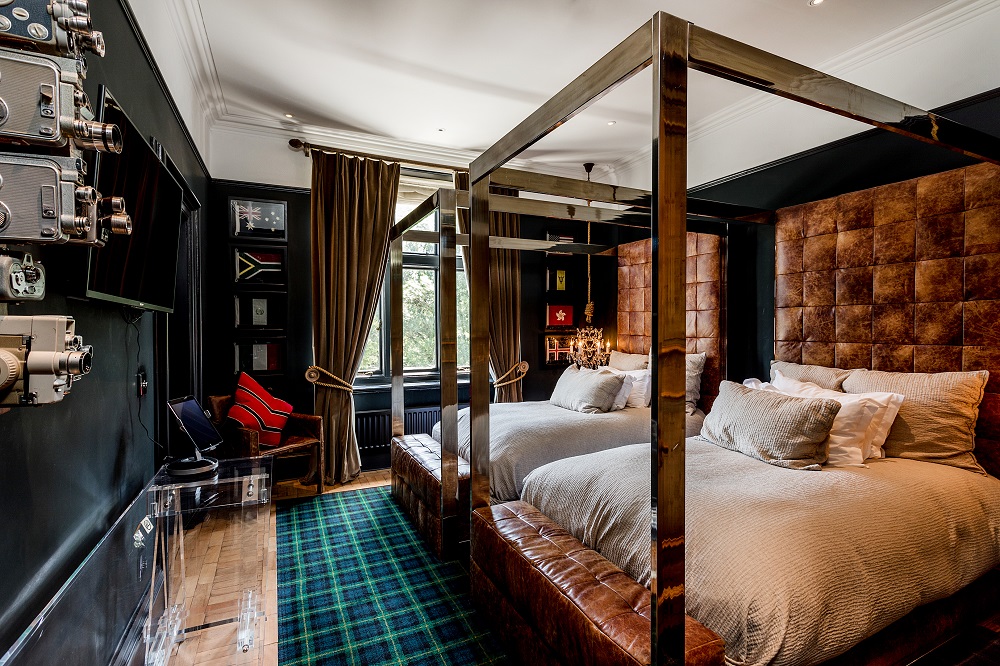 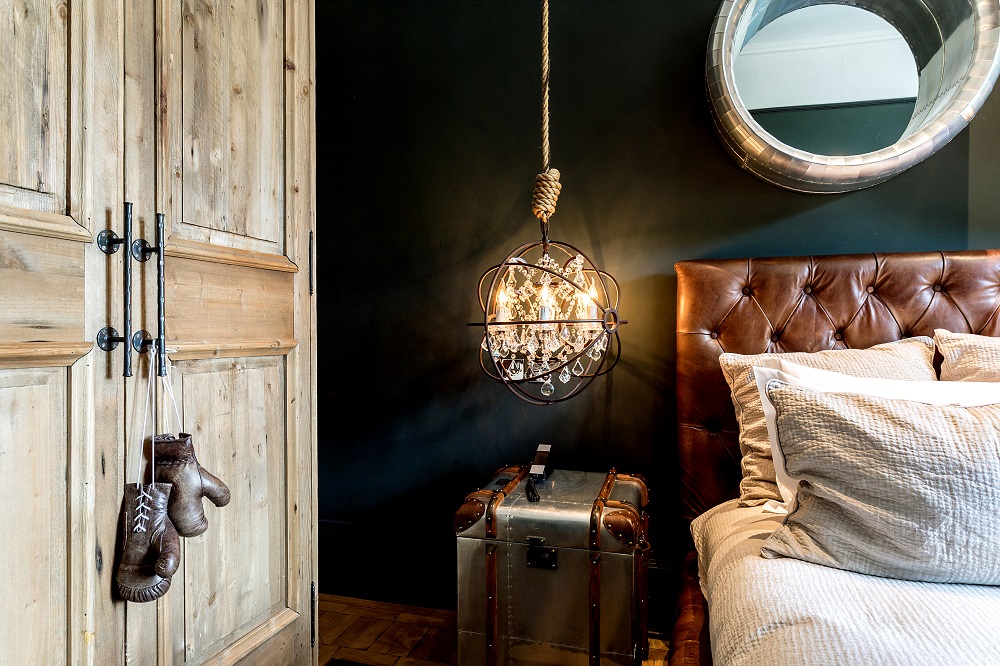 Nine individually designed en-suite guestrooms, all designed in homage to Lewis Carroll’s most famous work, have been given apt names, such as White Rabbit (the hotel’s design-led disabled access room) and the twin room Tweedle Deez to reference further the overarching theme down the rabbit hole. My nest for the evening, The Mad Hatter Suite, is full of idiosyncratic moments, which include topsy-turvy dollhouses on the walls above a brown studded-leather headboard and low-hanging chandeliers tied with thick rustic rope, which juxtaposes solid marble side tables that sit underneath. The spacious ensuites in each room offer minimalist luxury, complete with Geberit WCs, Villeroy & Boch basins and Pura shower units.

Voted, among other award wins, as the best boutique hotel for 2018 by Visit England, the converted Georgian Manor house is full to the brim of personality and charm at every corner. Combining the best in British design with one-off quality elements thoughtfully thrown in to add new layers, the design story of Glazebrook House Hotel has been a methodical one. On the surface it seems that arbitrary objects have been paired together. But the realty is that every item sheltered in the shell of the building helps to create a seamless and unforgettable hotel guest experience for all.

British furniture and interiors company Timothy Oulton has marked the opening of its flagship at Bluebird in unique fashion, by launching three special edition designs in celebration of the colour of Bluebird, and of Chelsea, available exclusively at the new gallery.

With 40 galleries across the globe, Timothy Oulton launched its global flagship and largest ever showroom at the historic Bluebird building last month. Known for its creative designs and authentic handcraftsmanship, the brand is particularly renowned for its signature hand-finished leather collection. New Ronin Indigo leather is its latest innovation, launched specially for Bluebird, and features on the limited edition Westminster Button Sofa, complete with a commemorative plaque of the opening, as well as a special edition Union Jack Flag Cushion and Thomas Sleeve personal accessory.

The distinctive blue finish is achieved using indigo, a natural dye extracted from plant leaves that has been used for thousands of years. The complex dyeing process takes a staggering 30 days to complete; the hide is first tanned with bark and nut shells, with natural oils and waxes applied for a slightly aged look, and the indigo is then applied. Once the leather has been upholstered onto the finished piece, it is hand- finished for a second time using wet sandpaper to achieve a stonewashed look, and finally polished with lamb’s wool.

Exclusively available at the Bluebird gallery:

Embodying the heart and soul of the Timothy Oulton brand, the Westminster Button brings together timeless design in the shape of a hand-tufted Chesterfield with 100 per cent natural indigo-dyed leather. A limited edition of 50 pieces, each sofa is emblazoned with a special plaque commemorating the Bluebird opening, and features shiny steel legs and 1550 hand-applied silver studs for a more contemporary take on the classic Chesterfield silhouette. 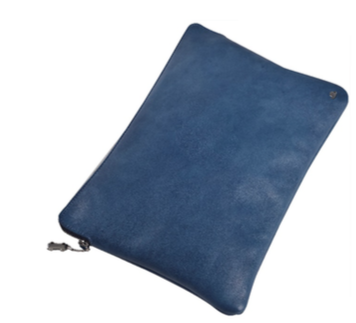 This simple leather pouch coordinates with any personal or business bag, creating a sophisticated and polished look. Large enough to hold a laptop, tablet or documents. Hand-finished in Ronin Indigo blue leather, complemented by a striking silver zipper and car zip pull, and a small embossed bowler hat in the bottom corner.