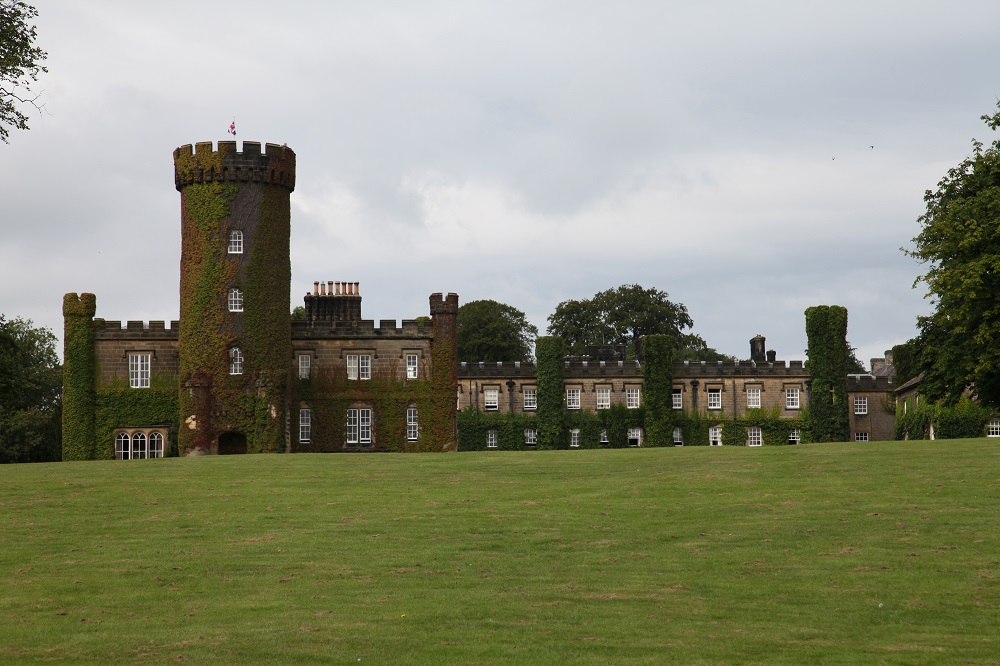 I try to look at different types of hotels in both Reviews (166 of them) and Miniviews (and there are over 150 of those), different qualities, national characteristics, different approaches to design. There are lessons for designers in all of them.

Namibian hotels like Damaraland, for example, shows how to maximise the use of eco-systems such as solar power, solar water heating and localised sewage systems. German hotels seem to handle luxury much more confidently than anywhere else I have been, epitomised by Steigenberger. Local vernacular too shows the evolution of the hotel from inns such as the Alma and the relationship to locality in a way that is alas so sadly missing from the megaliths that line the roads in Dubai.

Obviously I have a kind of mental check-list to work down, answers to which I find in some surprising places, such as leaders in technical innovation being Premier Inn with their approach to using technology epitomised by Burgess Hill. I have looked at hotels that reflect a history such as the high Victorian treatment in the Polish Noma Residences. In line with this I have always wanted to look at a castle conversion. Swinton Park is the closest I have managed to get to a castle yet.

The building itself dates back to the sevententh century, indeed it may even date back further with the oldest bit of the current building dating from the reign of Henry VIIIth I’m told. I’ve looked at older (the Churston Court in Devon being built around a long barn reputedly 9th century in date) but none with a tradition of being a fortified place, so when offered the opportunity to stay at Swinton Park I jumped at the chance.

Owned by the same family for many centuries it is only in the 21st century that the decision was made to convert what had become an over-large expensive-to-maintain country house into an hotel operation. It is still a work in progress as a guided tour around the parts of the estate not yet put to use showed, but what a great job is being done in changing the rôle and use of the many remaining out buildings.

The evolution of the building into an hotel follows a long evolution into a large country house from the original fortified manor that it probably was when built in 1690’s England. The existing gothic version dates back to the 1760’s with additions continuing through into the nineteenth century, so todays adaptive reuse continues a long cycle of reinvention by the owners past and present. 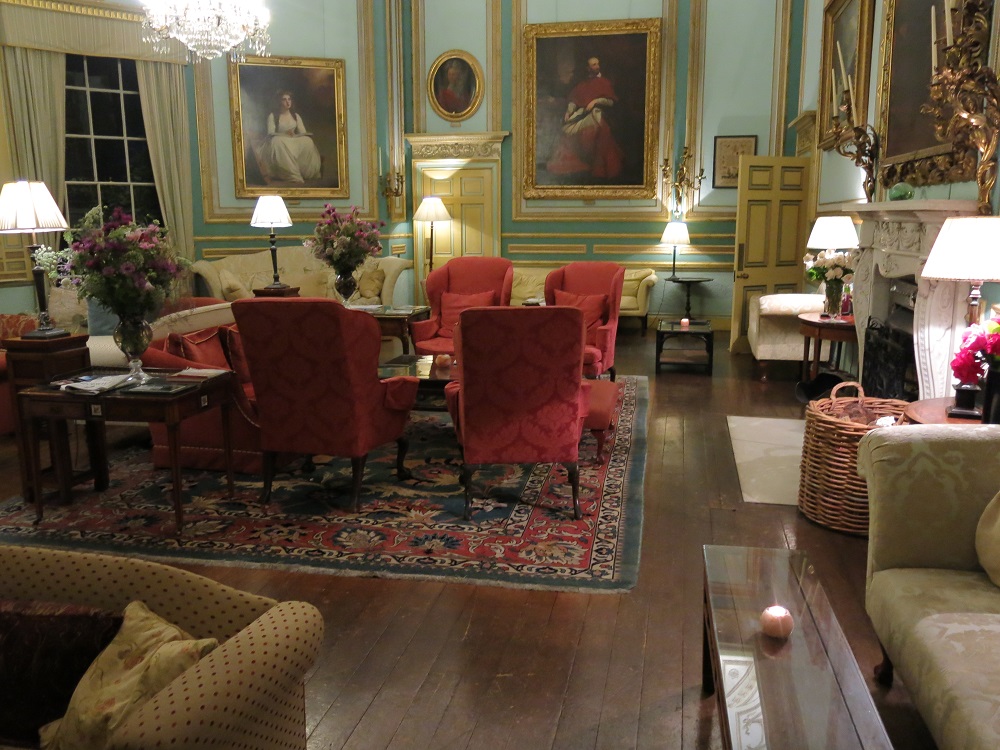 The current owners are being sensitive to the existing building as would be expected from a couple for whom this house is their family history at least in part. After a brief interregnum when it was used as a college, the house returned to family ownership and the refurbishment commenced at the turn of this century, the sixth for the property.

One of the attractions of older buildings is the amount of fine detail that is in them, and this one is no exception. With wonderful joinery (mill work to US readers) and some stunning plasterwork the inheritance enhances the generally large spaces. Included in this are two large safes now used for keeping guns and wine under lock and key. Guns because the hotel continues county activities in the form of shooting, hawking etc., but also runs a prestigious cookery school and trains staff.

The spaces themselves are large and enable a graceful and unflustered level of service, as the relationship of the scale of public spaces to bedrooms ensures that there is plenty of room for guests. The planned addition of the new spa and further bedrooms, together with the development of the business traffic will not stress these areas, except perhaps the bar, which is a smaller but equally interesting space that apparently used to be a private museum. 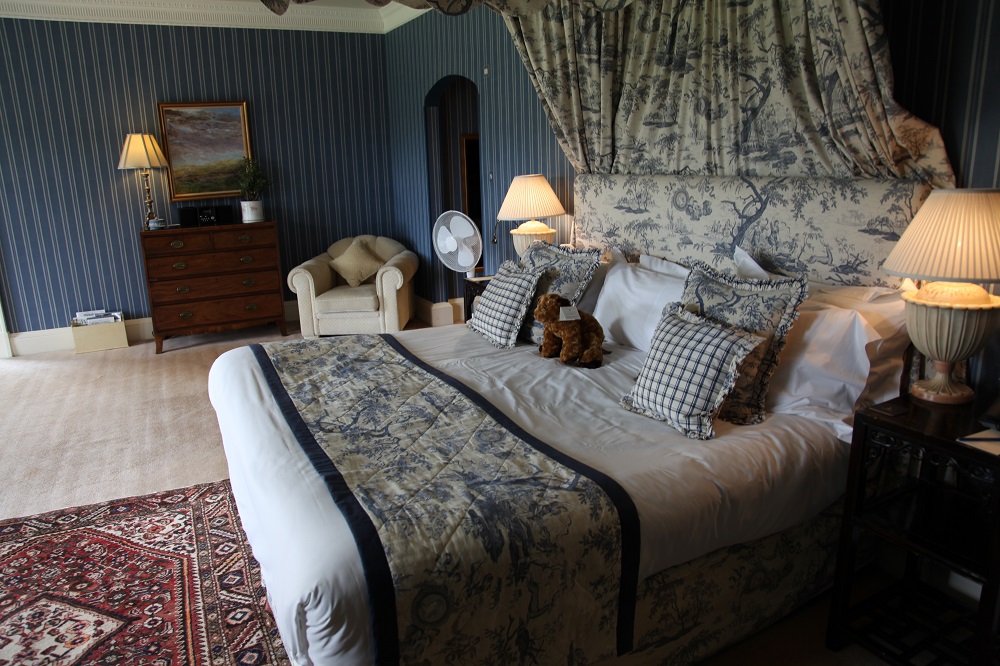 However the public spaces are so large that there is potential to expand the beverage operation, and the possible addition of a further bar/wine area, perhaps a more ‘cocktail lounge’ feeling area, or ‘gentleman’s club’ leather and – but then that’s for others to think through…

The pinnacle of the restored spaces is perhaps the magnificent dining room. It is a grand traditional space with a stunning plasterwork ceiling. Large windows maximise daylight and the subtle use of candles in the evenings compliment the gentle light achieved by the gold linings to the traditional chandeliers. Cornicing and timber work emphasise the quality along with a dado rail below which the decorative plasterwork in reiterated. Through the windows the deer park is visible and I was delighted to see a hedgehog snuffling its way along the edge of the lawn besides myriad bunnies at play.

Adequate for the current number of bedrooms as the planned increase comes into play some consideration may need to be given to creating further bar and dining areas. As an experienced Accor executive observed to be me recently “30 odd bedrooms is basically a mom&pop operation”.
Whilst Swinton Park is 38 bedrooms currently, plans are afoot to add more to this total along with a new spa area. There is plenty of room for this expansion without spoiling the nature of the operation but it will need some thoughtful replanning of the public spaces to service the increased demand they will generate. 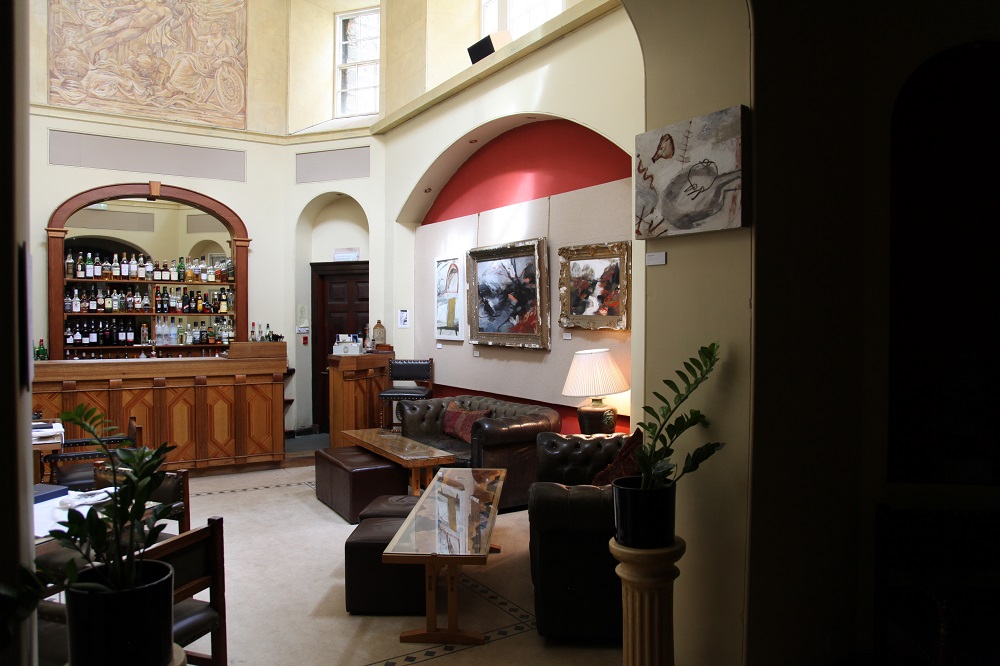 Among spaces currently available are a second guest lounge and the library, currently used as a function room. Whilst the GM regrets the fact that the original library shelves have gone, and they must have been spectacular in a house of this period, what remains is in itself a stunning space. High clings and huge windows flood it with daylight and fireplace and plasterwork reflect the quality to be seen in the other rooms.

The quality of plasterwork continues through the corridor spaces, the culmination of which is perhaps the grand staircase that links the floor. Although there is a lift, it is so much more fun to reach the bedroom via this grand staircase, complete with reminders of bygone days. One the wall are hung portraits of past family members, and the oak of the banister rail and stair treads is offset by a rich red carpet and red walls against which the plasterwork looks even more stunning .

Bedroom corridors off the staircase are short and additional bedrooms are being created out of rooms on these wings, the latest the Bradford room, containing subtle Asian influences. Rooms themselves are large with large luxurious bathrooms generally having soaking tubs and walk-in showers. Views from the rooms are of course of the deer park — the estate has over 20,000 acres of land with rambler paths and walks. 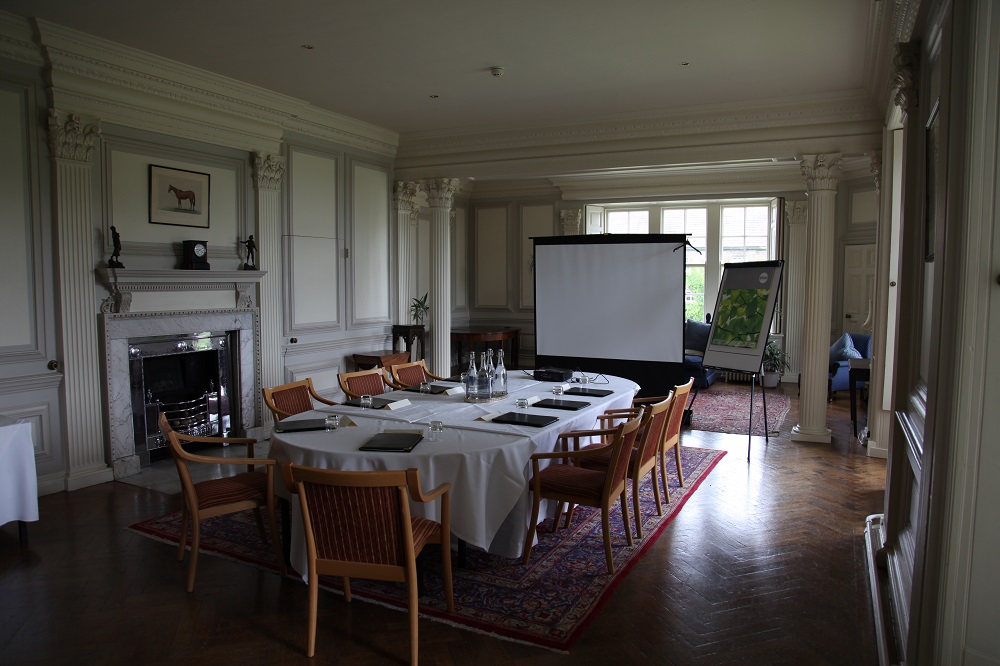 All bedrooms are individually designed, no two alike. However all share the same generous use of space. At a time when many UK urban up market hotels are shrinking their bedroom sizes to fit more in it is delightful to find a traditional country house hotel that is going out of its way to offer the last true luxury in our crowded world – space to swing your cat.

Traditional values dominate here – traditional values of service, and hospitality. Traditional interiors are an enormously variable feast, but the interiors here have a classical timeless English country house appeal. It is to be hoped that these traditional values can be maintained as the property grows. Certainly some careful appraisal of the public area provision needs to go hand in hand with expansion but the building has the scope for this to be achieved whilst maintaining the quality that is inherent to the building.

As it is said, ‘they don’t make ’em like this anymore’. Certainly this is one to watch developing with interest… 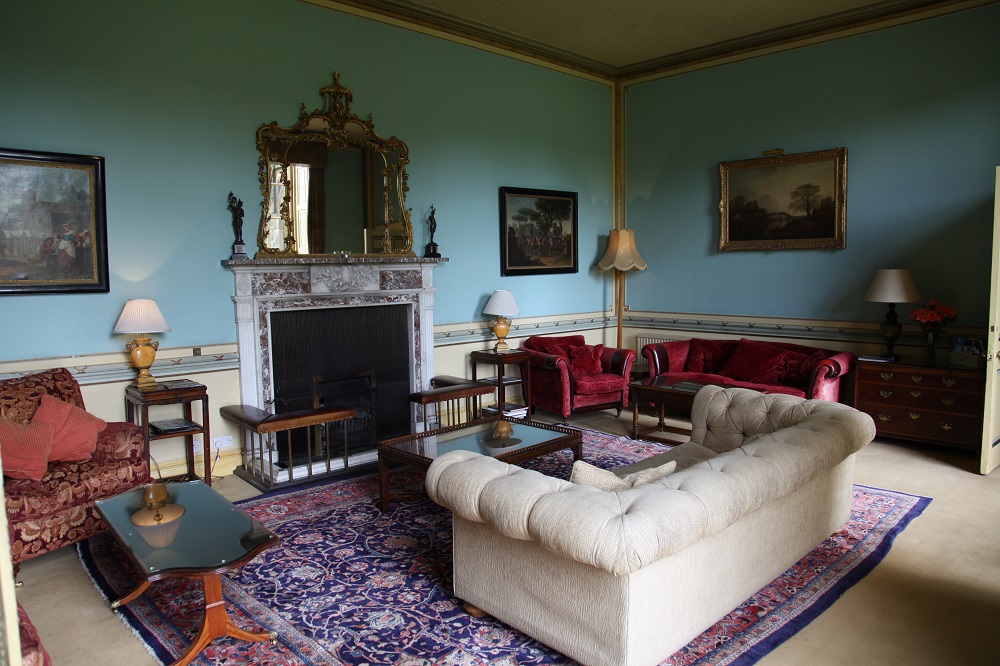