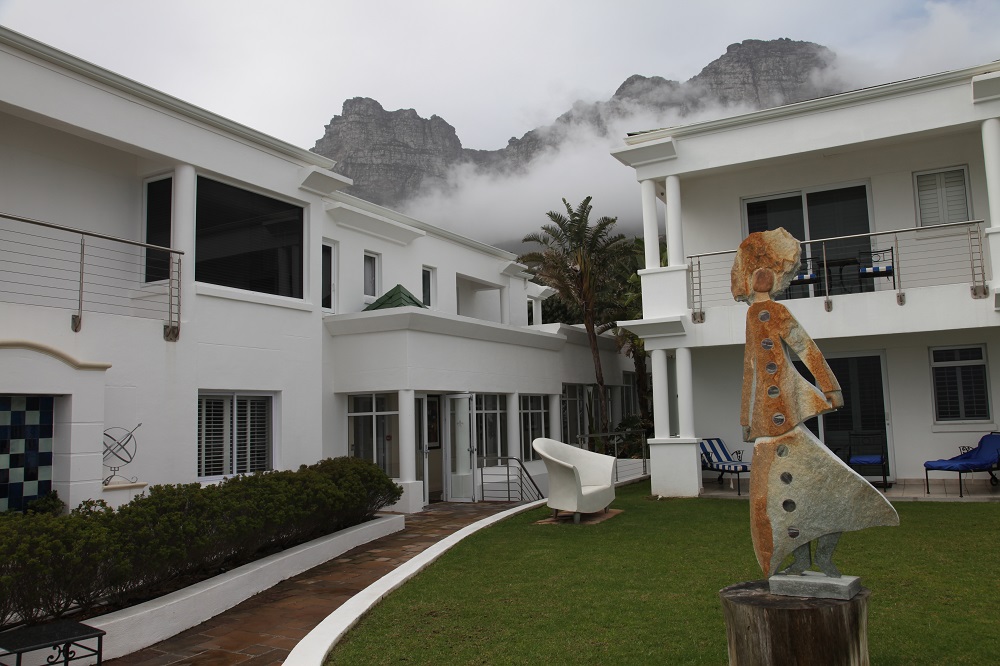 South Africa is in the Southern Hemisphere, which means its seasons are the reverse of those in the Northern Hemisphere – as upside down as the constellations at night. Thus June, July and August are winter months – and of course the time when many visitors from the Northern Hemisphere arrive. It can be very cold in the Cape – indeed the 2010 World Cup has been described as one of the coldest ever, with snow fall on Table Mountain.

For 12 Apostles the variability of the Cape weather and location on the Atlantic (colder) side of the Cape Peninsula ensures that they are frequently inside a cloud mix of salt spray off the sea and mist off the mountains behind the hotel. The hotel is in a narrow band of fynbos (aromatic herbal scrub) between the 12 Apostle mountain range, after which the hotel is named, and the main coast road around the Cape. Whilst it photographs beautifully from around the bay the hotel is isolated by the main road from the shore line which at this point is high surf and large boulders – indeed the hotel carries relics on its terrace from shipwrecks on the point below the hotel.

The hotel is part of Red Carnation group who also operate the wonderful Bushmans Kloof, and whilst the service and staff are excellent (and probably the reason for those awards) the location here is not a patch on Bushmans, despite being in a reserve. Here Cape wildlife may be caught on hotel CCTV cameras at night but there are no conducted forays into the finebos, the emphasis being on the sybaritic, the quality of the bars and restaurant and an award winning Spa. During the day the proximity of the road means wildlife is rarely seen, so this is an urban hotel in a park setting. 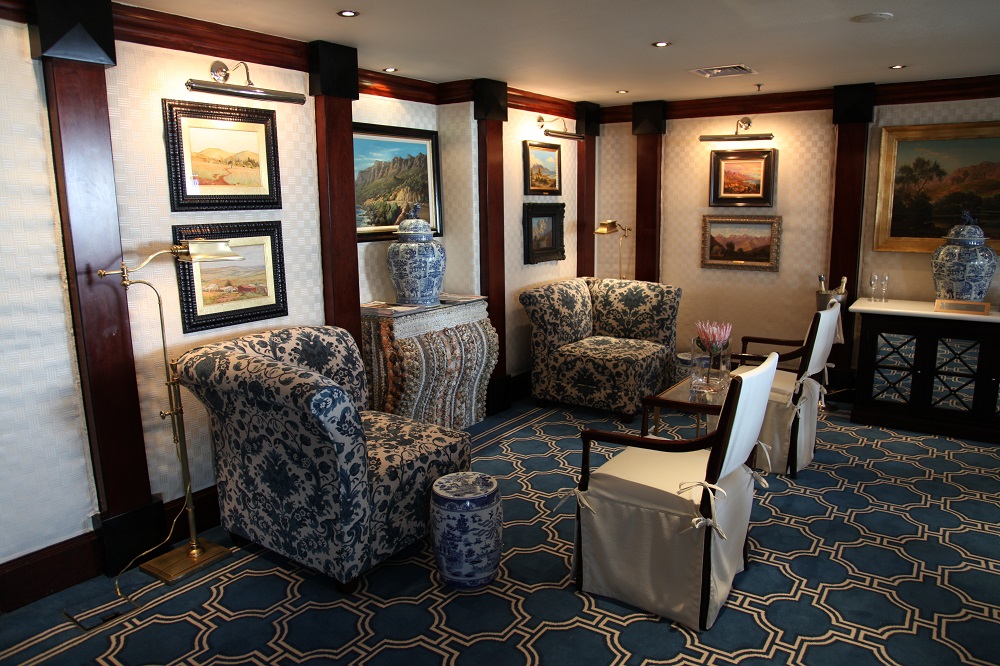 During my visit the hotel was undergoing a refurbishment. I had resisted the temptation of visiting the hotel in previous trips to Cape Town so perhaps I have only myself to blame for such a poor sense of timing which meant they had a temporary kitchen, the bistro was out of action and the builders, whilst well managed and discreet, were still evident. So, rain and builders, not a good combination for any hotel wishing to show off its fine qualities. For 12A, as it is known locally, this was not a problem as staff obviously went out of their way to make sure all guests were as unaware as possible of the changes going on. Only because I am a nosy designer was I able to poke my way into the refurbishment and get a sight of the new rooms as they developed.

The weather? Well this is Cape Town, and there are only supposed to be 60 days a year here when there is no mist or cloud because of the two oceans, Atlantic and Indian, that meet just a few miles away.

So what was the refurbishment like? If the old schemes were voluptuous ‘old English’ style of somewhat decadent luxury,belonging to another age the new are a very contemporary reinterpretation of the seaside hotel, bringing a life and vitality into the buildings the old scheme did not quite achieve.
The layout of the hotel helps with refurbishment as it is a collection of connected but independent blocks, allowing refurbishment to be phased a block at a time so guests are not involved. The new schemes bring primary colour stripes to the carpets in the public areas, with signage mixing images of the sea with a tactile quality, a kind of flotsam and jetsam feel, to the images and graphics. 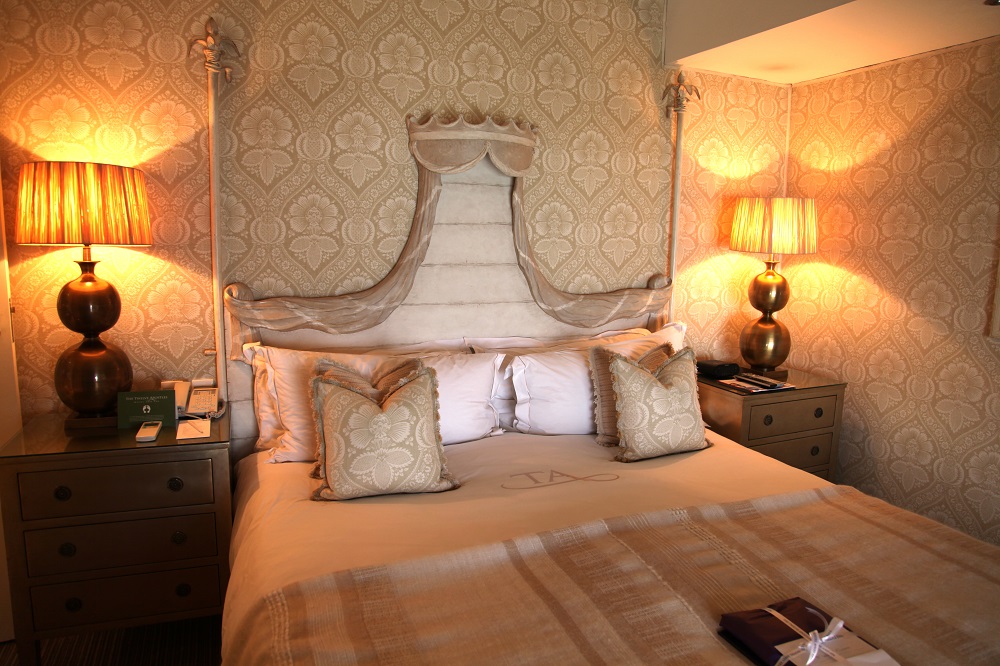 There is a delightful freshness about the corridor schemes that is carried through in the freshness of the bedrooms, with good use of mirror and a baseline green that pulls in the landscape. The whole has a youthful vitality but still has the luxury finishes to be expected. Sophisticated use of upholstered walls carries through into huge upholstered bedheads. The wall coverings are of fabric so there may be a question mark over their longevity, but they bring a sense of luxury sophistication to the rooms.
Whilst very different to the same designer’s schemes at Bushmans Kloof, there is a sense of humour at work in both that enlivens the design. The feel that this is a tongue in cheek rework of a seaside hotel, the stripe in the carpet so obviously visually referencing deck chair canvas (consciously or unconsciouly)makes me smile with pleasure.

The bar also carries through the sense of fun seen in the corridors, with its focus on Africa rather than seaside. In common with the Restaurant that sits on a floor below, it has ocean views and a terrace for smokers, although smoking is not yet outlawed in internal spaces in South Africa in the way it is now in Europe. 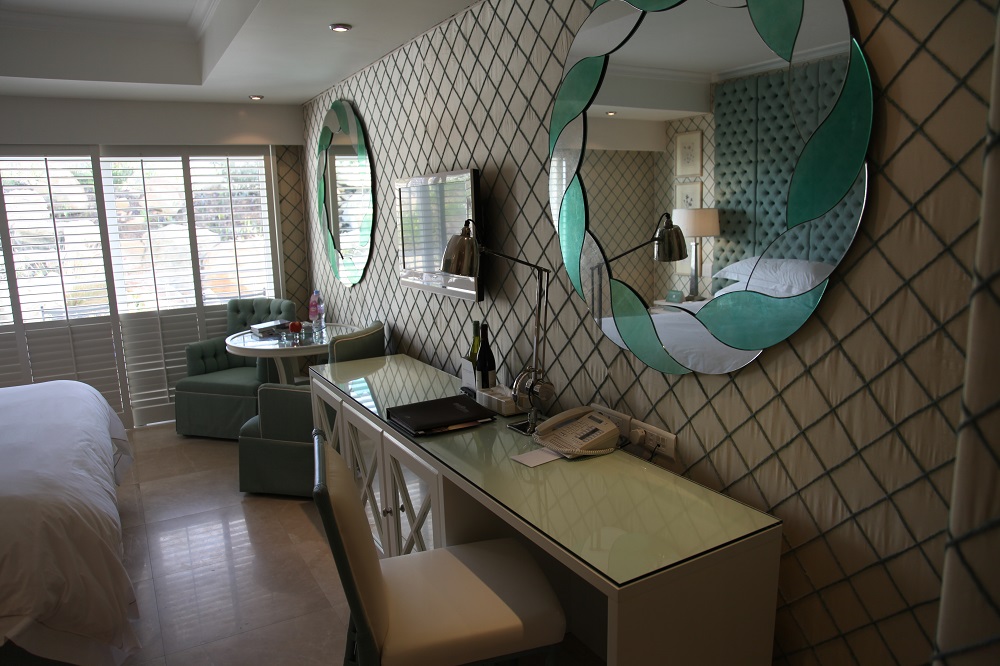 There is a successful mix of comfort and design, with the sense of humour engaging though the banana leaf wallpaper that works here very successfully. Images are of Africa with an exceptional collection of original drawings and prints of big cats. The bar is large and comfortable as is the rest of the room, and it is here that the likeness comes closest to Bushmans Kloof, the handwriting of the designer being the same.

The whole is almost from another era in the way the barman remembers names, the easy informality yet superb service in a room that is clubbish homely and stylish all at the same time. This is the same successful blend of Africa and Europe, or modern and traditional that makes the other hotels operated by the group so successful. The restaurant is stylish and very popular. Design again is modern and comfortable, considerably expanded in warmer months by the use of the large terrace. Despite being full the area worked well and the room had the bustle and smiles, chatter and absorption in the food that characterises most succesful restaurants.

In the absence of the bistro, food service from a temporary kitchen into the restaurant and the bar areas was terrific,and the food quality excellent, approved of by another SA hotel manager with whom we dined. 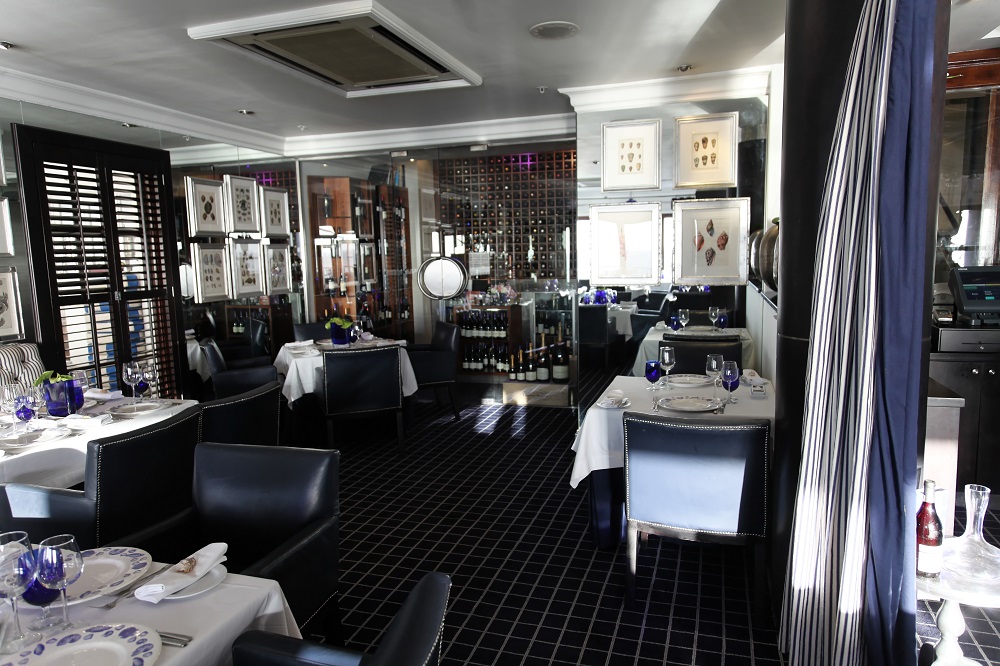 Many Cape-tonians know 12A well, using its very popular Spa, but it also has a small cinema which is used for previews and small business presentations. In addition there is a marquee style funtion suite.
Twelve Apostles is one of the pre-eminent Spas in Cape Town, winning many awards. The spa is almost carved out of the living rock under the hotel itself. There is an external pool with ocean views but there are also pools within the spa itself.

Treatment rooms are neatly designed and there are also treatment rooms in the fynbos outside, mimicking the installations at Busmans Kloof. In the summer these could be opened up to the sound of the surf beyond the road. Excavating the living rock must have been an enormous challenge. There are two entrances to the Spa, one from the hotel and the other from adjacent to the Reception entrance, with its own reception desk and lounge area. The route into the Spa from its own front reception is over an underlit glass bridge, a device that is used elsewhere to introduce more light into the grotto of the interior.

This leaves a guest coming through from the hotel slightly undecided as to where to go on arrival although staff are usually on hand to greet new arrivals. Carving out the spaces has obviously resulted in some compromises as space is very limited. The spa is stylish and the treatments are expert, but there are areas of constriction. The relaxation zone is small and the male changing facilities are almost a vestigial afterthought. 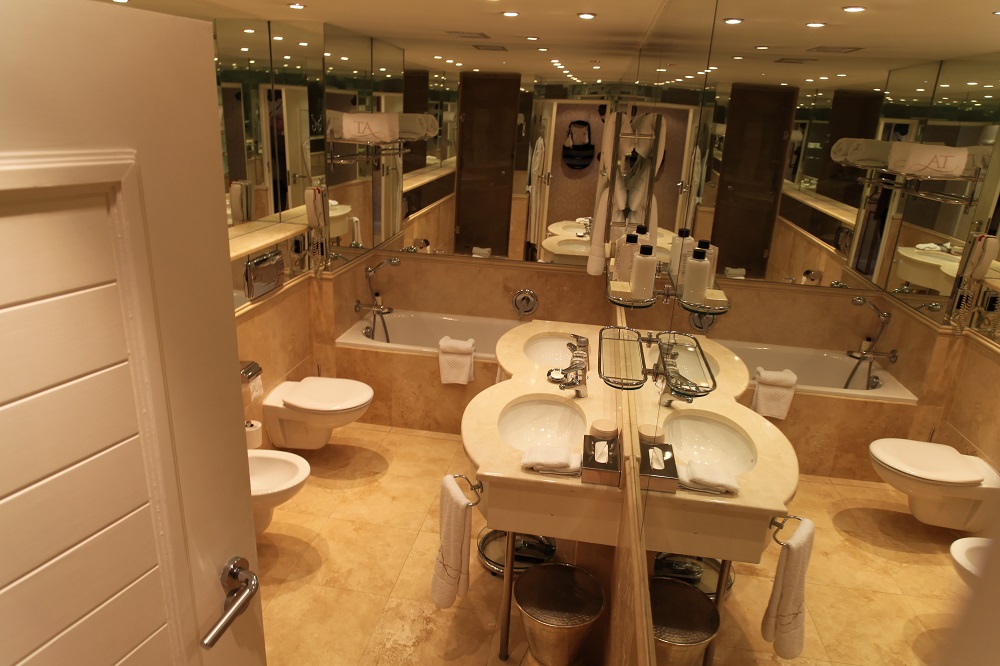 The popularity of spa treatments with men (apparently more men then women use them in many countries now) may well have changed the user profile for many spa operators. Here male changing would struggle with more than two guests at a time. Visiting during refurbishment showed how well the hotel is being updated with a fresh stylish contemporary interior. The corridors are hugely improved, whilst the styling of the bar and restaurant is timeless. The new bedrooms will be welcomed as a change from the somewhat old fashioned, stuffy, schemes that they replace.

On a future visit of Cape Town I will have a look at their new bistro. The award winning Chef (his underchef is now chef at the Cape Grace in Cape Town)proudly showed me his new kitchens, not quite ready to be brought into service on my visit but no doubt being worked hard by the time you read this.
With a refurbished Cape Grace, the new One & Only Cape Town, and other new Cape Town hotels under way including a Missoni, competition for the 12A is increasing. Its popularity with local clientele and its views along the coast will give it an edge.

Its biggest asset though is its operator, Red Carnation. With Bushmans Kloof its country cousin now recognised globally as one of the world’s great hotels,and the reopening of the refurbished Oyster Box in Umhlanga the ability to offer the leisure traveller a number and choice of destinations will continue to help this hotel remain full.