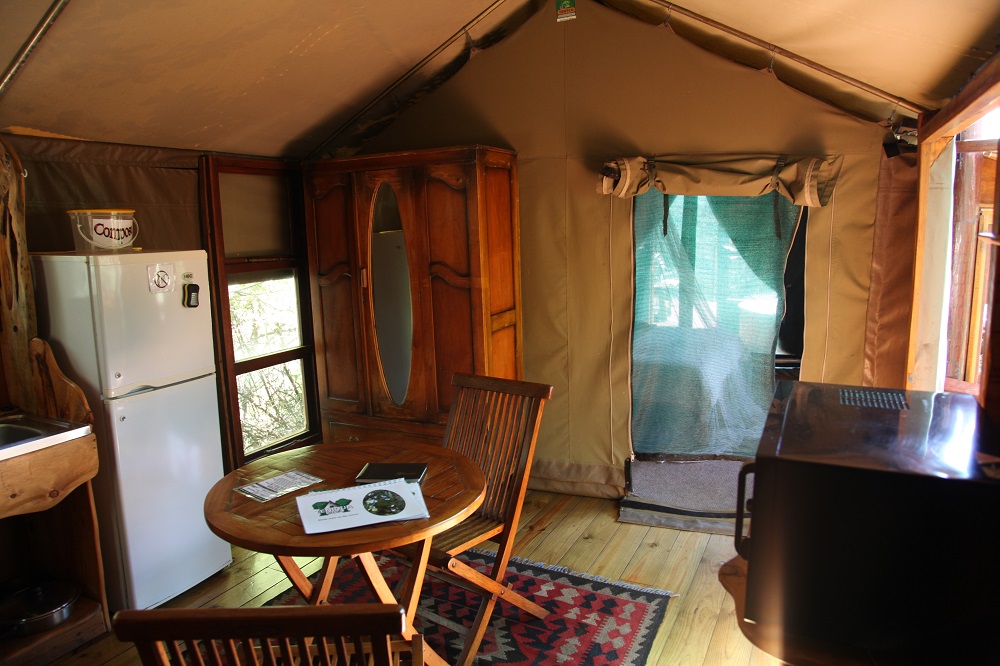 Going green means many things to many people, from adding solar power panels to a roof to a through total reworking of energy use. In our sophisticated cities, going green generally has to be driven by financial return, and the effort involved focusses on energy use. Premier Inn are an excellent example of a group trying to build carbon neutral hotels at no higher cost than any other new build, and who look for a return on investment of around the 7% mark — something that could not be achieved in early years of solar panels, hence many of their properties only now have them added, whilst recycling of heat, and other energy saving measure had previously been adopted.

In some cases however a totally different approach is taken. In Namibia the Damaraland Lodge impressed me by the use of local materials and the ability to remove the hotel, leaving virtually no trace, if the market no longer supported it. In part this was driven by the location in a wilderness where there were no mains services. I was told the only delivery to site was 30,000 empty sand bags, everything else in construction being generated locally. Where the attraction for tourists is the environment, then it makes sense for the hotel operator to tread softly upon the earth or risk damaging that which attracts the guest in the first place. As wilderness decreases so preserving it for tourism becomes an issue.

Teniqua Treetops falls into the category of an environmentally sensitive property focused on sustainability whilst bringing the guest into the wildlife environment too, but here the mix is complicated by the owner’s self-build approach. With just 8 suites built in the treetops of native forest in the foothills of the Outeniqua Mountains, these rooms are the ultimate in recycling, with, for example, many of the windows and doors being recycled from salvage yards. This ecologically sensitive approach provides comfortable suites providing self-catering hideaways just off the popular Garden Route in South Africa. 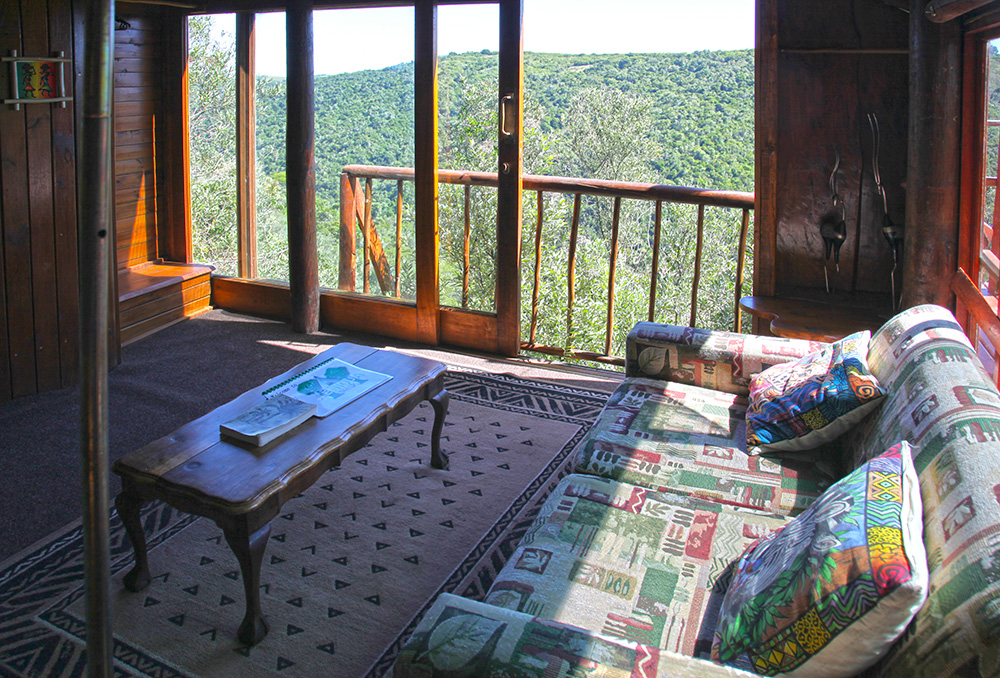 In truth this kind of hospitality resort has laid the foundation of what has become known in the UK as ‘glamping’ – glamour camping. Not quite tents these rooms none-the-less make good use of camping antecedents. Built on the steeply raking slopes of the Karatara river valley these rooms are isolated from each other, and but for the car port outside, could almost be isolated from the 21st century too, except that despite their self-build nature the solar power and water heating panels are sophisticated enough to cater for most of the needs of guest. Air conditioning and heating is however driven off a backup mains electricity supply so creature comfort is catered for in a way any other form of ‘glamping’ would not be able to do.

Creature comforts are catered for in other ways that mark this as an hotel — for example rooms are serviced daily by housekeepers who access on four wheel drive bikes. The environmentally friendly nature is essential given the build is on the edge of the river valley and away from traditional mains services such as water and sewerage. Water is supplied from rainwater capture, and this is one of the areas of the world with the cleanest air, so the rainwater is drinkable, although most guests bring their drinking water in bottle form.

The hot water supply is adequately supplied in this environment by the solar panels but just in case there is a bottle gas back up, which also provides the gas for the kitchen area. If there is a downside here it is the non flushing soil toilets. A strong arm is needed to work the levers that expel the ordure, and the lack of smell is proof of their functional effectiveness. The mix is allowed to age and emptied to be returned to the land as fertiliser, but despite this there is still an initial ‘yuk’ factor. 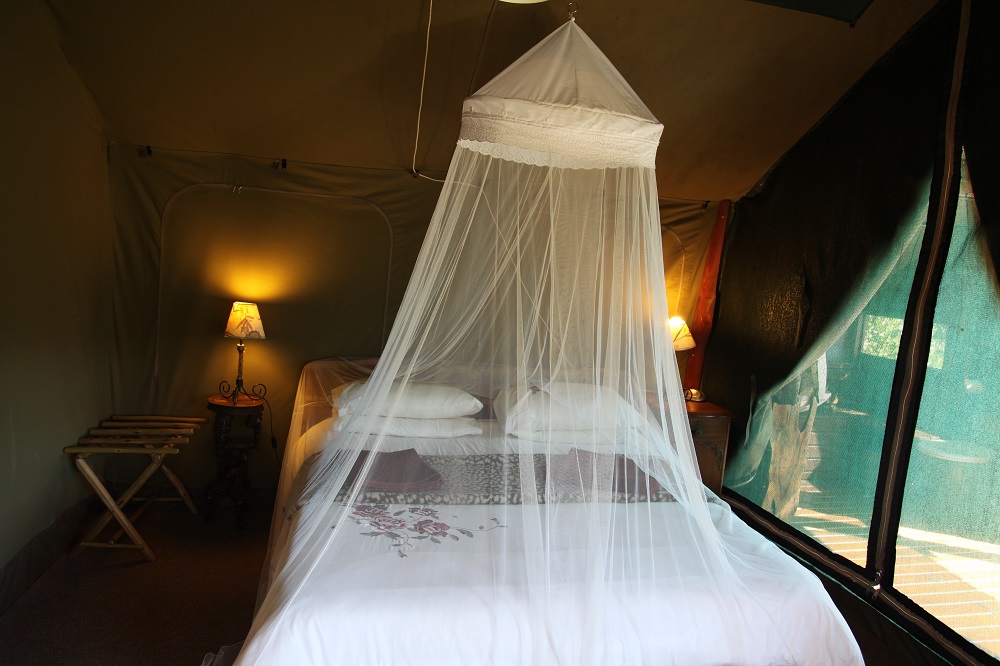 All these practical considerations fade into the background when standing looking out at the view. The ‘old mans’ beard’ fronds of lichen Usnea on the trees is very sensitive to pollution and here grows to metres long showing how pure the air is. The forest below the rooms is one of the last remnants of native South African fynbos forest. This is one of the first hotels where there is a list of reasons not to come on the booking site, starting with the observation: * If you are someone who has phobias about flora or fauna: trees, plants, birds, wild animals, insects, snakes, butterflies, moths, tame animals…don’t come.
* We won’t, don’t, can’t fumigate the forest…so, if you would rather be in a sterile environment…don’t come.

In the past guest have also left because of the lack of means for obscuring the views from the bathrooms. As there is no way anyone can look in not reflections in glass, no passers-by in streets, none except possibly a passing sea bird to see you shower this is an hotel where you can revel in the freedom an individually isolated room can provide. During our stay the only intrusive strangers were the occasional spider, the proximity of bird life and the inquisitiveness of the hotel cat (Marlene), who insisted on accompanying walks through the forest.

The bedrooms are secure, with the additional safety of insect nets and inner canvas liners that can be zipped closed at night. During the day the large balconies allow many hours of sun drenched contemplation of the treetops, bird watching and listening to the animal noises from the forest below, tuning in to the natural world. This form of retreat is rare and to be treasured. Yet there is also a social area to this property, complete with a small conference facility, and a pool area for those for whom company of a significant other is not enough. Imaginative recycling throughout the property is marked by the outdoor furniture (one of the owners is an engineer)and the creation of play areas provides and energy consuming area for offspring. 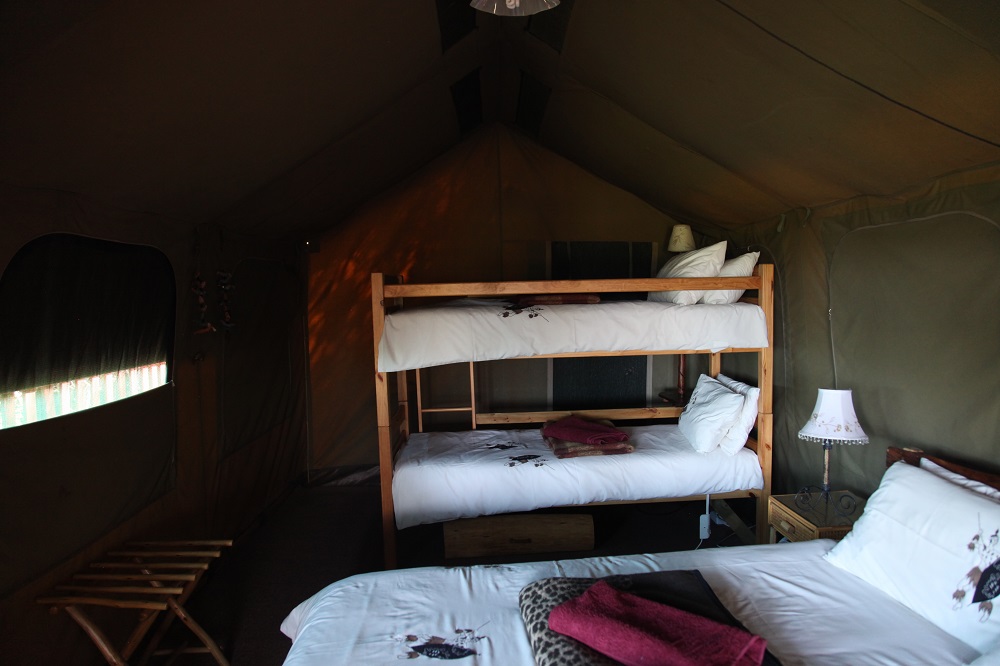 There is a communal braaii area for those who want to indulge the manic obsession South Africans have with burning everything over wood fires, or as a relief from self catering in the individual kitchens within each room. There is a small shop on site but it is an easy drive over deserted roads to go shopping for those gorgeous and cheap South African wines if you didn’t bring along enough in the first place. With any installation in the treetops the problems of how to supply water and take away waste are major concerns. Electricity whether generated via solar or the national grid is relatively simple via a thin(ish) cable. Water and sewage pipes tend to be both bulky and need long trenches to make the provision.

here rainwater provides a large part of the answer and notices in the bathroom, which despite the limitations boast both shower and bath tub, push the lesson home saying showers are for one, baths for two (and may be helps with the popularity with honeymooners…). Guest are invited every time they turn on a tap to choose between the solar heated and gas heated water. At no stage did the hot water supply seem inadequate even on dull days, when the solar heating was selected.

Occasionally the water colour will be somewhat ‘cola-coloured’ as the hotel describes it, because of the tanin that comes in water supply from the forest area, as water or bathing is pumped up from the river below. Rainwater however is very pure and quite drinkable.Both river and rain water have been tested and are potable. The brown colour could be removed from the river water with flocculation (chemicals) and lots of energy and waste (completed flocculent). The operation knows this would not be environmentally justifiable… 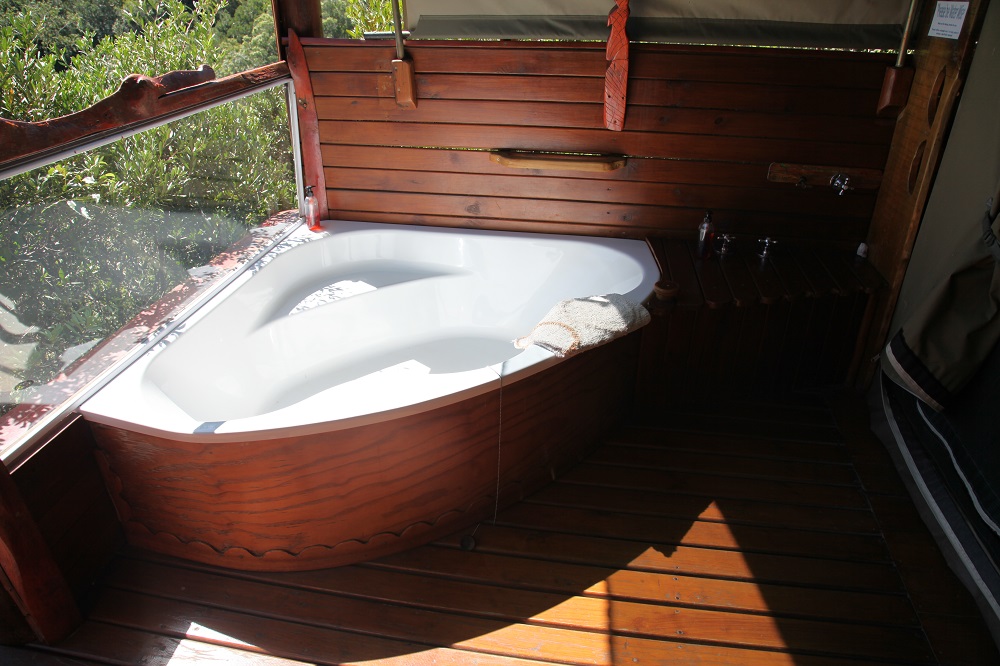 Sewerage is a less tractable problem and here the latest dry toilet systems are used to safely and efficiently process human waste without threatening the sensitive Karatara catchment area; septic tanks are used to avoid damage to the underlying root bed of the forest floor and avoid polluting a water course. This means each time the toilet is used, a scattering of forest leaf fall is added and the lid lifted and dropped to power a spiral screw which removes the waste into the septic tank. This is not a silent forest, the sound of birds and wildlife ample tribute to the care and concern the owners have taken to protect what is, after all, their major asset. Here walks may give sightings of caracal (a form of wild cat) or even possibly leopard, Small buck and monkeys and copious bird-life provide a nature lovers idyll.

This is not a destination for those who love cities and night-life epitomised by the pub and nightclub. This is somewhere to feel the soul of the earth, to sit in contemplation watching a sunset, to be at one with the world. Such places are rare, and need to be treasured.

© Words and Pictures Patrick Goff. From a visit in March 2014