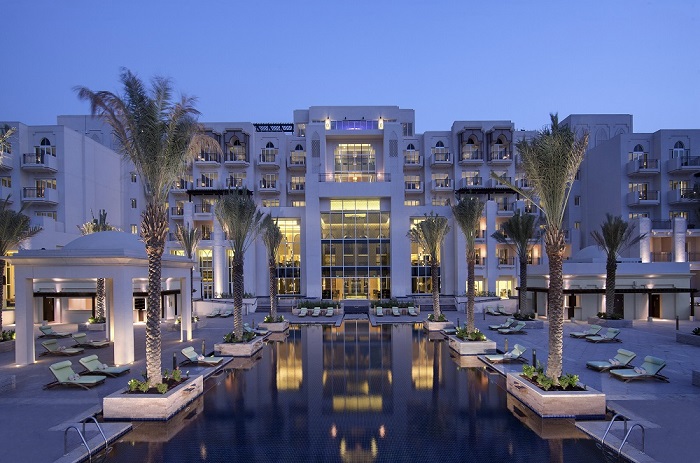 When I first moved to the UAE back in mid-2011, I had come to the conclusion after several previous holidays that Dubai was the centre of it all as far as the country was concerned. I knew Abu Dhabi was the nation’s capital, but I viewed it much like I do American state capitals — smaller and less important than some of the bigger metropoles like Los Angeles, Chicago and New York.

So, it was little wonder it took me more than 6 months to venture the hour-and-a-half on the Sheikh Zayed Road highway through the desert to visit the ‘little cousin’ of the emirate I then called home. Of course, in wealth terms, Abu Dhabi is very much the ‘Granddaddy’ of the UAE; its investment fund surpasses the other emirates’ combined.

But in tourism terms, Dubai has been forging a very successful path for several decades now, which had left Abu Dhabi considerably further behind. And on my first visit to the capital, I didn’t see anything that would change my perception. But by 2013, when I went to stay at the Anantara Eastern Mangroves Hotel & Spa for the first time, the landscape had changed considerably. 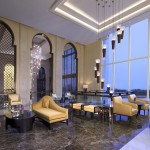 One of the lounge areas 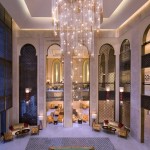 Looking down on the lobby and reception area 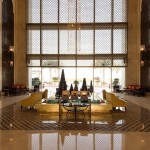 Arriving at the Anantara Eastern Mangroves

By then, Abu Dhabi’s rulers were pumping money into all sorts of projects — most famously Ferrari World and the city’s Grand Prix – in a bid to catch up with Dubai. On the whole, they’re doing well. And this Anantara property — the third in the emirate — is a shining example of the ‘no-holds-barred luxury’ Abu Dhabi is now regularly attaining.

The enormous and expansive arrival lobby and reception area of this new-build property, complete with impressive, ornate bowls of the ubiquitous dates and over-attentive staff with welcome drinks, certainly set the tone for this property. Much like the rest of this hotel, there is a clever Asia-meets-Arabia balance in the interior design, mixing the Thailand-based Anantara name and Abu Dhabi’s penchant for being the more authentically Arab city compared to Dubai.

You are hit with views of the 1.2 kilometre nature reserve set among the mangroves as soon as you step into the lobby and it’s hard to avoid them wherever you go throughout the hotel. But with meandering creeks, birds and wildlife abounding and the Abu Dhabi city skyline shimmering in the distance — it’s more a question of why you would want to avoid them. One does get the feeling that the functionality of the hotel has been slightly tipped in the favour of business guests, something that comes through in the design of the 222 rooms. The two I stayed in had a somewhat business-like feel, but certainly didn’t lack for luxury or size (rooms start at 57m2). They still retain an ornate finish, with dark timbers, beautiful swirl-patterned carpets, lush upholstery in bronzes, greens and golds and intricate woodwork above and around the beds in the suites. 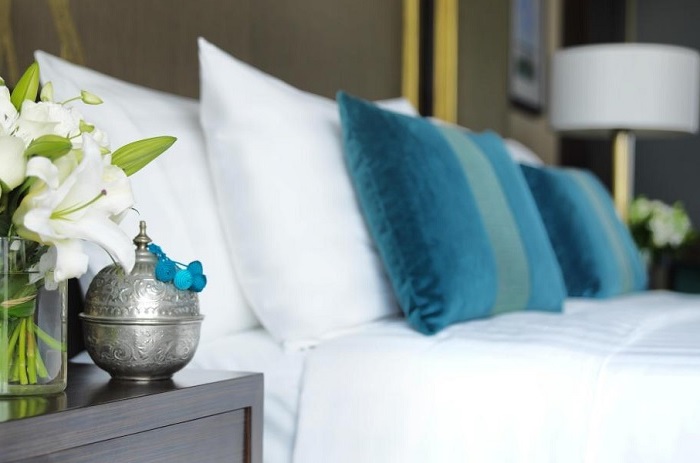 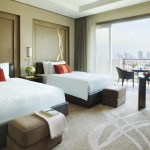 A Deluxe Room, identical to my room on my visit 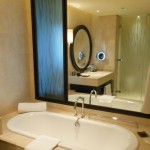 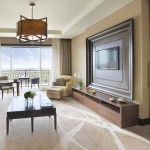 The living room of one of the larger suites

If possible, an upgrade to one of the Kasara Mangroves suites on the ground floor is a recommended one as they are three times larger than the standard rooms and offer their own private pool area. If not, another tip would be to choose a mangrove-facing room as the alternative gives a less than savoury view of the busy Salam Street — and while triple-glazing puts paid to any noise pollution — it’s worth requesting the former for the views alone. The bathrooms, while minimalist in shape are a definition of luxury with a stunning marble finish throughout.

*On a side note, I was also informed that the Royal Mangroves Residence is the largest suite of its kind in the UAE — and so it should be at a staggering 1,320m2 with a capacity for 10 people*

The ostentatious Arabian elegance (is there any other kind?) of the hotel continues in the public areas. Walls are lined with 18-carat gold leaf and glittering mosaics, timber trellises all set against domed ceiling insets and arched windows. Outside, a centralised infinity pool offers perfect views of the surrounding natural beauty and watching the sun set behind the city skyline is a quite spectacular way to spend an evening. One flaw I will point out in the design of the pool area, however, is the expanse of the stone flooring means walking from a further lounger to the pool in the searing summer heat without suitable footwear isn’t an option. 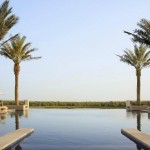 View of the mangroves from the infinity pool 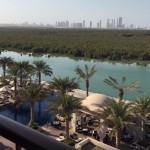 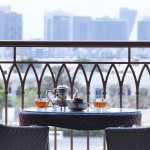 A balcony view of Abu Dhabi

As a destination hotel — there was very little else around the hotel when I visited — the food and beverage outlets are of a higher standard than perhaps expected in Abu Dhabi. The highlights include the very impressive Impressions rooftop terrace bar and we dined in the excellent Pachalyen signature Thai restaurant, with the almost-stereotypical bamboo cage screens, Buddha-inspired decorative items and ‘economical’ lighting. 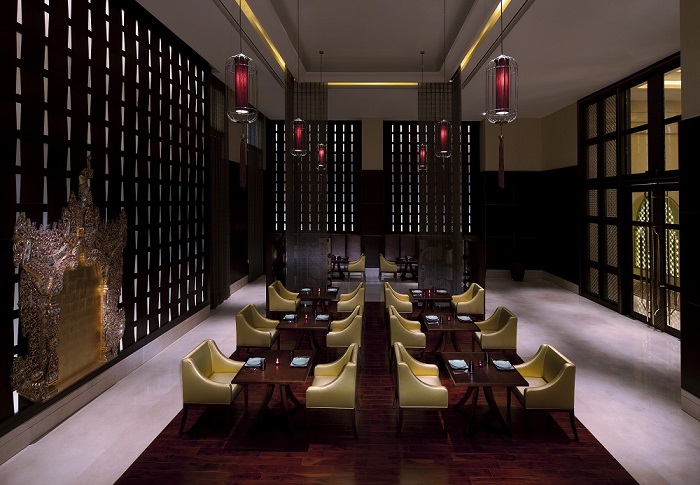 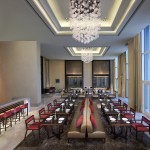 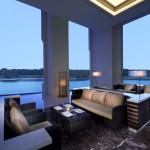 An al fresco lounge area of the Impressions Bar 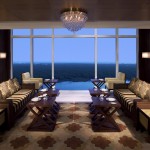 A lounge area of the one of the suites

But this being a spa hotel, this is where the property shines. In terms of design and interior, this is one of the better I’ve had the pleasure of visiting — dripping in opulence, the sheer attention to detail in everything from the Turkish hammam to the individual treatment rooms is difficult to find fault with. 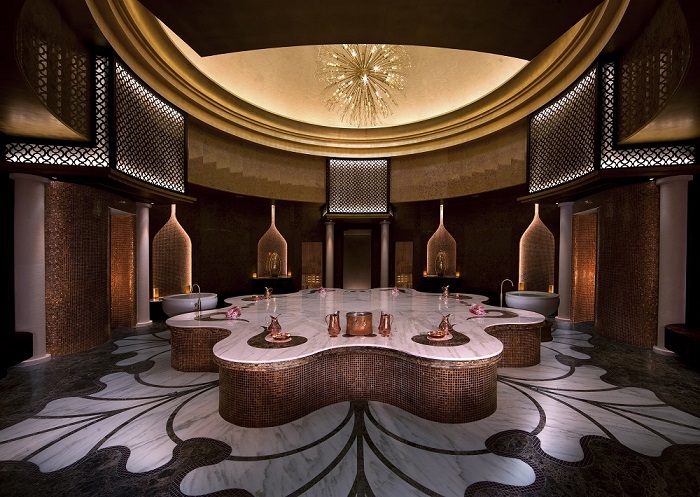 The beautiful Turkish hammam of the spa 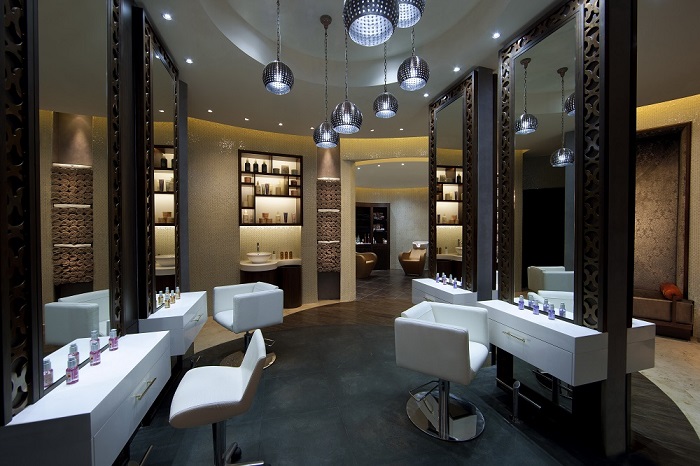 The fantastic use of light in the spa’s salon

The occupancy numbers were low when I stayed in the off-season, so the hotel appeared empty at times, but it’s probably more due to the sheer scale of this property that I imagine it wouldn’t feel overcrowded even at full capacity. And with Abu Dhabi’s tourism trade improving and increasing year-on-year, you can expect this property to be closer to full than empty on a regular basis.

Words by Daniel Fountain. Based on visits in 2013 and 2015
www.abu-dhabi.anantara.com