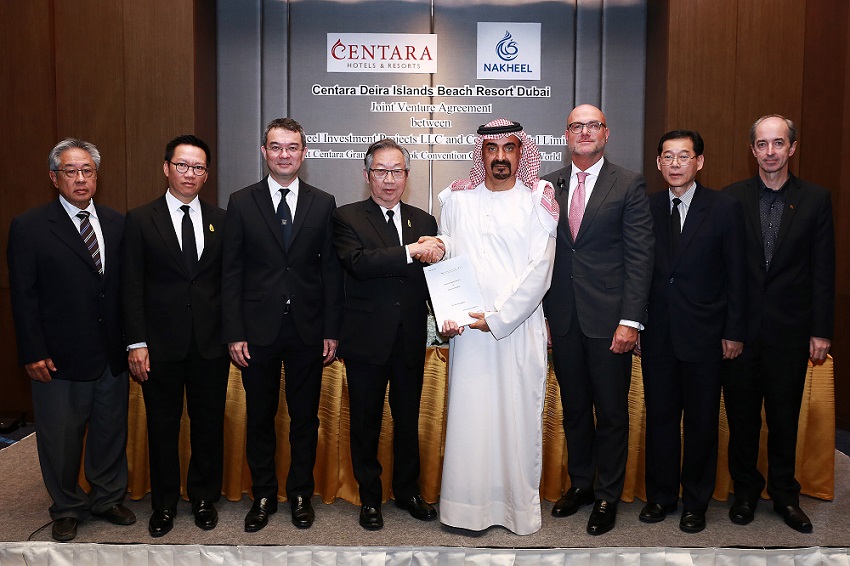 Under the agreement, cemented in Bangkok, the two companies will deliver an upscale resort on a prime stretch of beach on Deira Islands – Nakheel’s new, 15.3 sq-km, tourism, leisure, retail and entertainment hub that will contribute significantly to the Government of Dubai’s tourism vision.

Nakheel’s joint venture with Centara is the latest development in the company’s aggressive expansion into Dubai’s hospitality sector and its second international joint venture for Deira Islands. The first, an 800-room, AED900 million (£203 million) all-inclusive resort and waterpark with Spain’s RIU Hotels & Resorts, was confirmed in February last year.

As the first Centara establishment in the UAE, the new resort will cover an area of 295,900 sq-ft. Features include a waterpark, dining facilities, business centre, kids’ club, spa and fitness centre. The resort is anticipated to have soft opening in 2019 and grand opening in 2020.

Centara Hotels & Resorts is part of Central Group, one of Thailand’s most prominent family-owned conglomerate holding companies that is involved in merchandising, real estate, retailing, hospitality and restaurants. Centara’ s portfolio currently includes around 14,000 room keys across 65 hotels and resorts under six distinctive brands in Asia, Indian Ocean, and the Middle East.

Nakheel currently has over 5,300 rooms across 16 hotels, resorts and serviced apartments in operation or under development, with the first two – at Dragon Mart and Ibn Battuta Mall – delivered in 2016.

Deira Islands, where Nakheel has already invested more than AED3 billion (£677 million) in infrastructure work, coastal works and design services for a range of new projects, will add 40km, including 21km of beach, to Dubai’s coastline. Nakheel recently completed an AED150 million (£33.8 million) access bridge to the islands, and has just released a tender for the construction of six marinas. The development is expected to have around 250,000, create more than 80,000 new jobs, and offer hundreds of new hotels, serviced apartments and mixed-use buildings, and extensive retail and leisure attractions. Nakheel itself is building 16 residential towers, five hotels, two serviced apartment complexes, Deira Mall, Deira Islands Night Souk and several marinas at the islands.